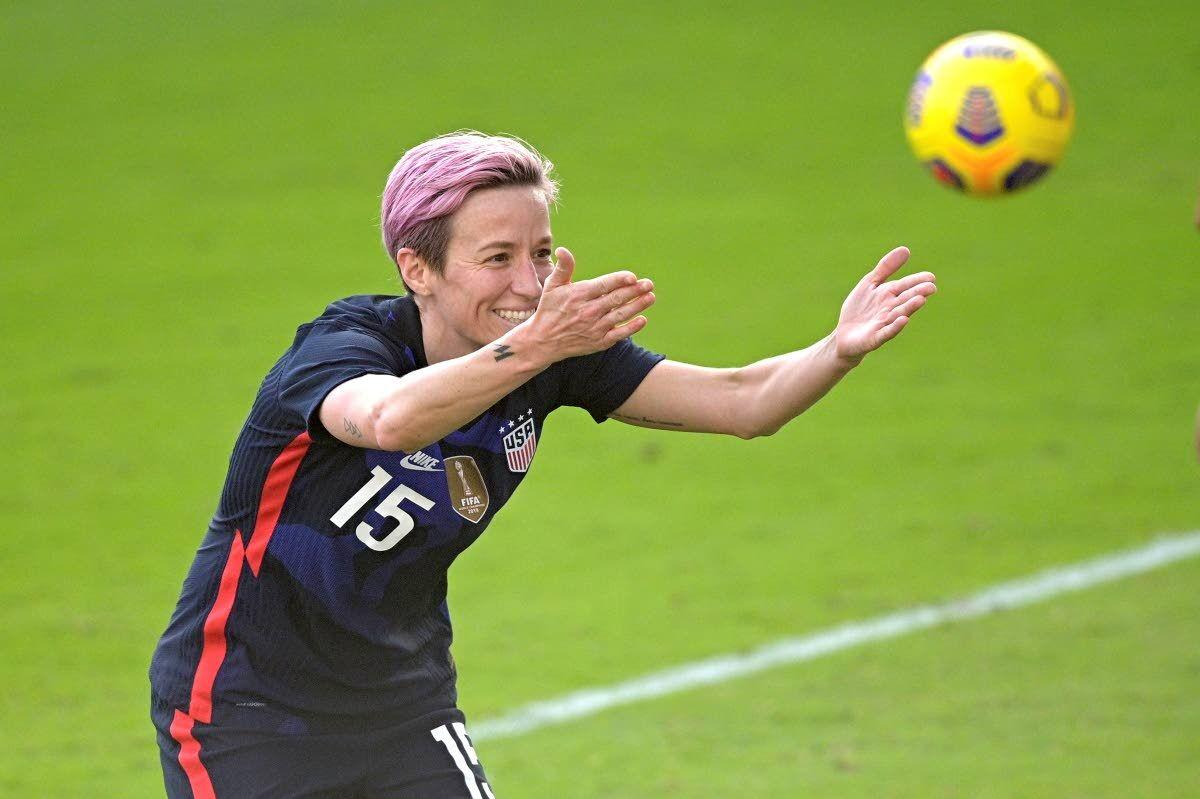 United States forward Megan Rapinoe (15) acknowledges fans in the stands after scoring a goal during the second half of a SheBelieves Cup women's soccer match against Brazil, Sunday, Feb. 21, 2021, in Orlando, Fla. (AP Photo/Phelan M. Ebenhack) 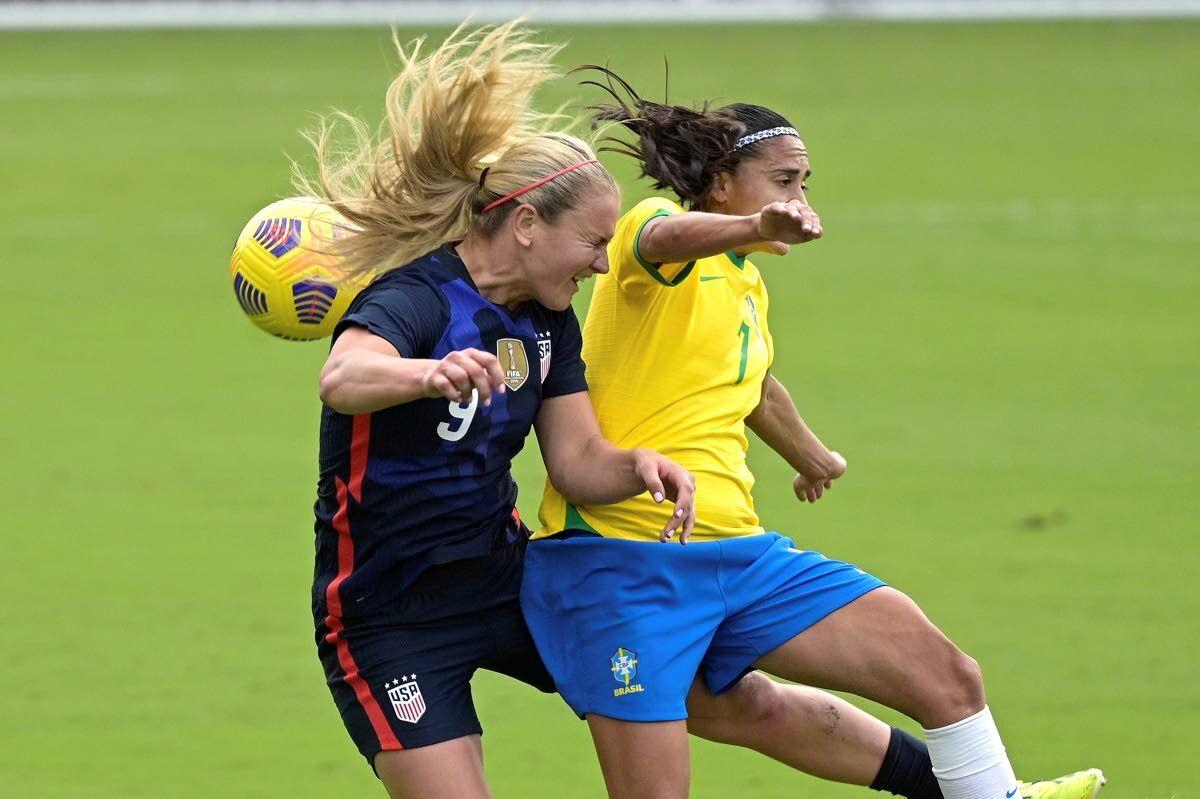 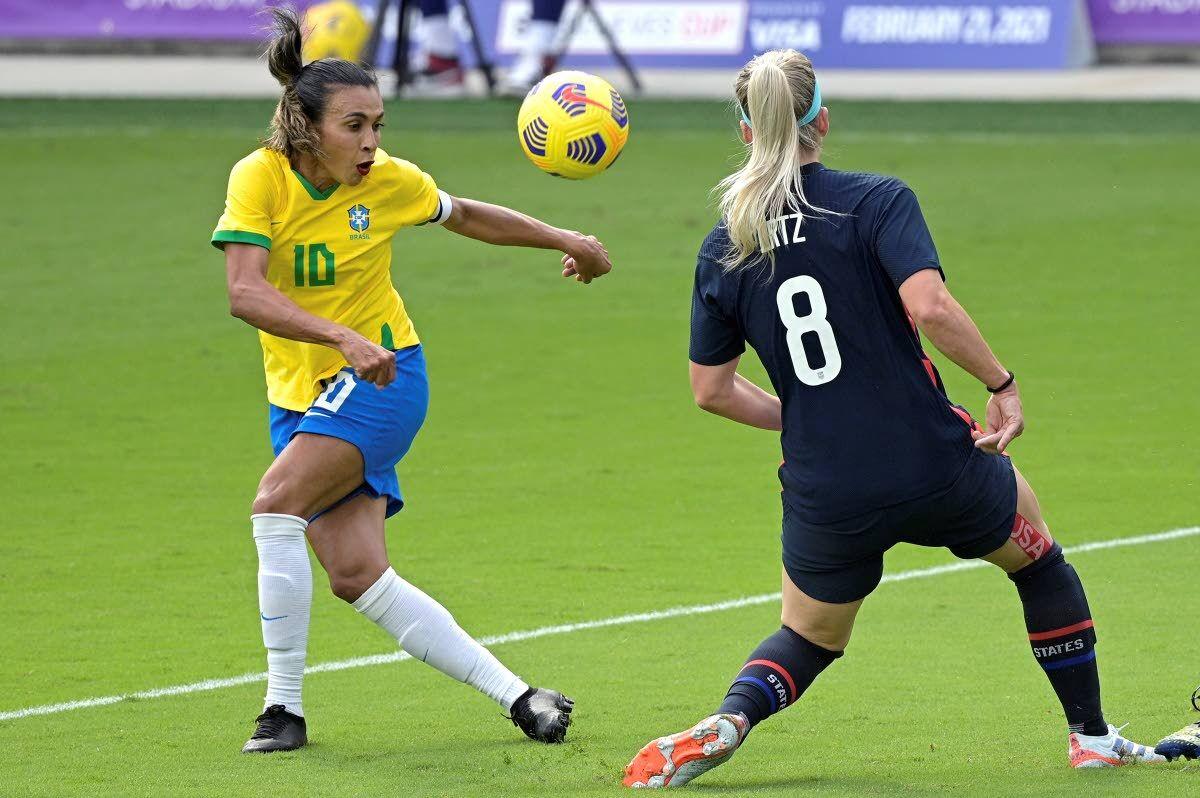 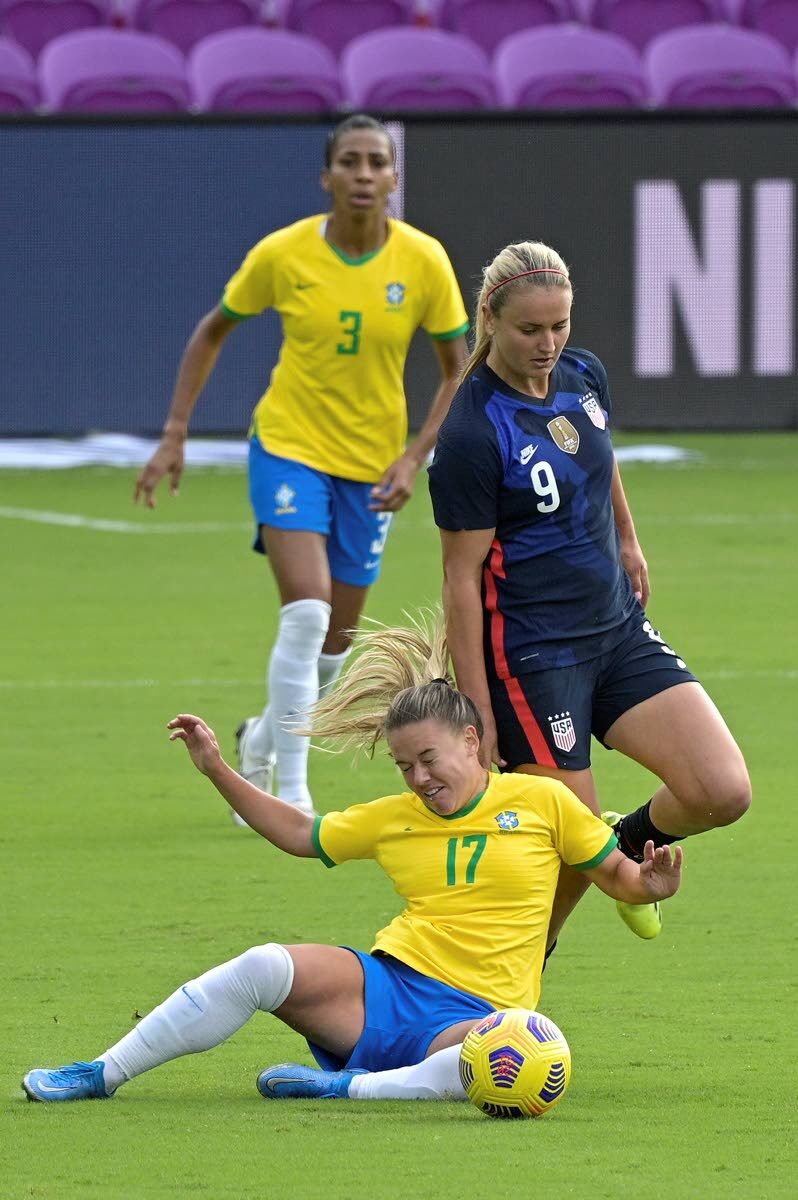 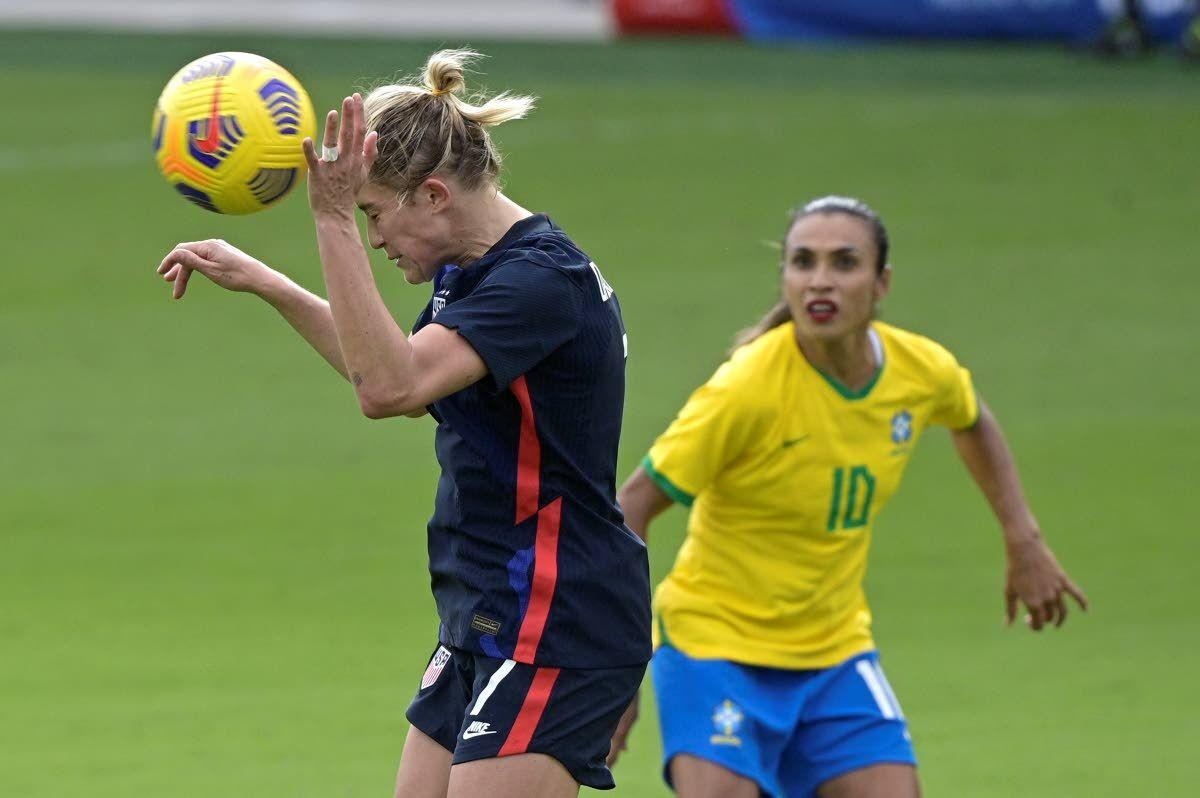 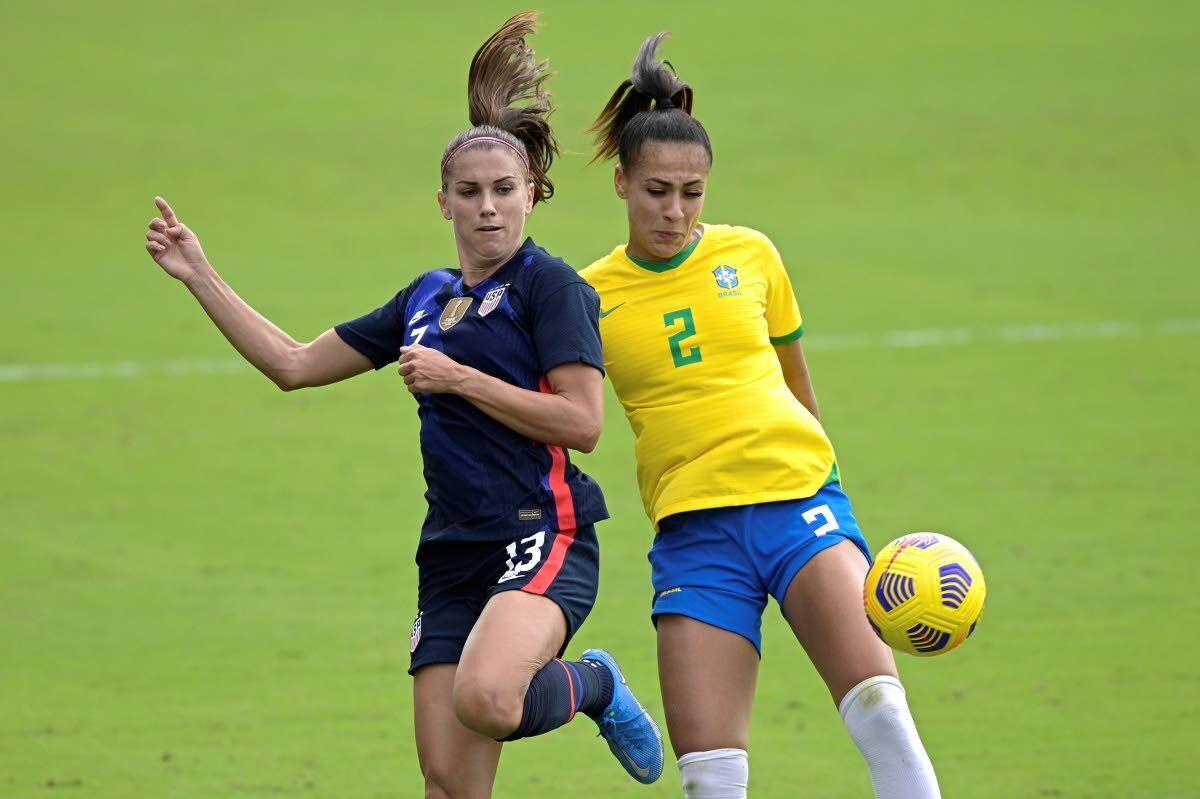 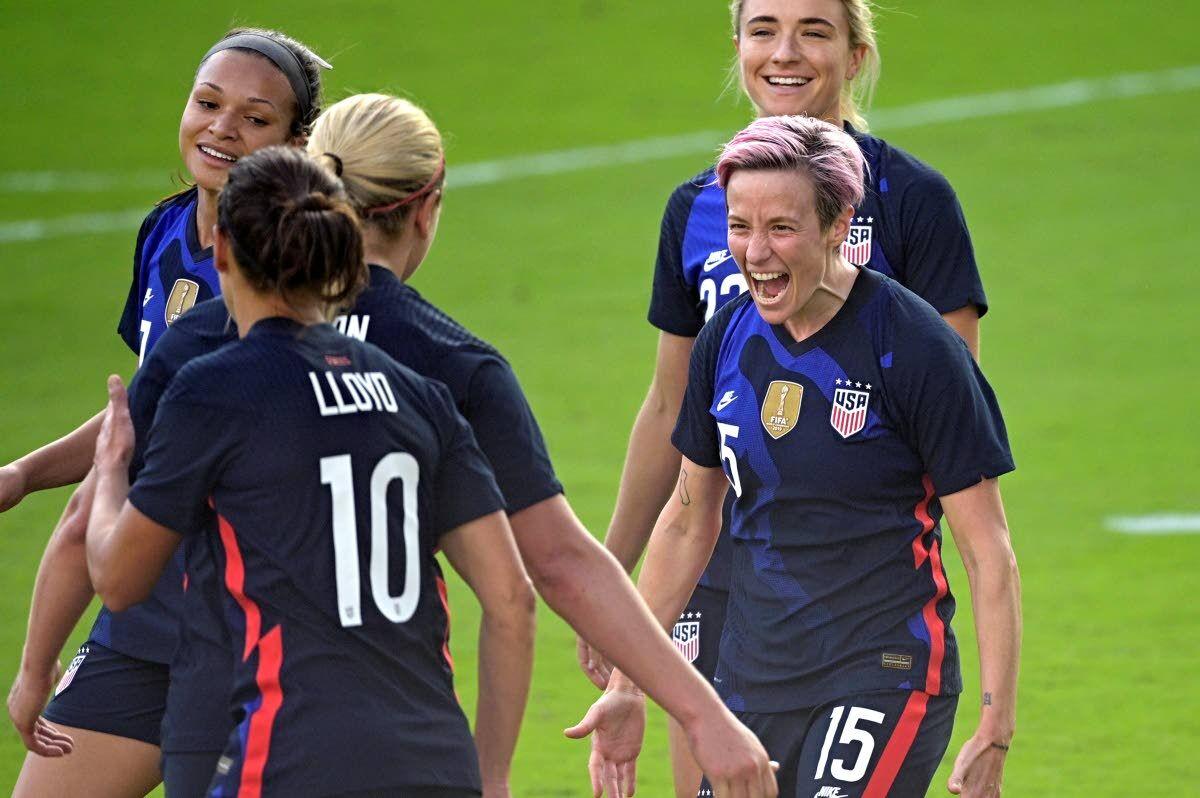 United States forward Megan Rapinoe (15) acknowledges fans in the stands after scoring a goal during the second half of a SheBelieves Cup women's soccer match against Brazil, Sunday, Feb. 21, 2021, in Orlando, Fla. (AP Photo/Phelan M. Ebenhack)

ORLANDO, Fla. — Christen Press scored in the 11th minute, and Megan Rapinoe added a late goal as the U.S. women beat Brazil 2-0 in the SheBelieves Cup on Sunday.

The United States sits atop the SheBelieves Cup standings with two wins. Canada beat Argentina 1-0 in the late match. The round-robin tournament concludes Wednesday when the U.S. plays Argentina (0-2) and Canada (1-1) faces Brazil (1-1).

The U.S., winner of the past two World Cups, now is unbeaten in 36 consecutive games overall and 52 straight at home.

"One thing that I've learned playing on the U.S. women's national team is that you have to prepare for every single game as if it's the most important game of your life," Press said. “So that's kind of the approach I take.”

"I am disappointed in the start of the game, of course. We conceded a goal. But not only a goal, the way we played our attack in the first 20 minutes," Brazil coach Pia Sundhage said. “That's room for improvement, for sure. But then the second half, and the fact that we created fairly many chances, I'm happy with that.”

Press took a pass from Lindsey Horan and rushed forward, fooling a defender before a powerful strike to the far corner of the net. It was Press' 10th goal in her past 13 national team games and 59th international goal.

“Lindsey played me a great ball in on a diagonal, so that I wasn't in a crossing situation, I was actually able to cut in and open up the angle of the goal,” Press said. “And that's what I want to do, it's my signature shot and my signature style so it was great to see it go in the back of the net.”

Moments later, Crystal Dunn's sliding tackle prevented Debinha on the breakaway. Brazil had a good chance in the 82nd minute when Marta found Debinha in the box, but the shot went just wide.

It was the 10th straight shutout for U.S. goalkeeper Alyssa Naeher.

Alex Morgan made her first start for the national team since giving birth to daughter Charlie last year. Morgan and Press were subbed out in the 71st minute and replaced with Rapinoe and Carli Lloyd.

Horan served the ball into the box for Rapinoe, who scored in the 88th minute. After she scored, Rapinoe made a baby-rocking gesture in honor of teammates Ali Krieger and Ashlynn Harris, who recently adopted daughter Sloane.

The U.S. beat Canada 1-0 in its SheBelieves Cup opener Thursday, while Brazil beat rival Argentina 4-1. Brazil is making its second overall appearance in the tournament, now in its sixth year.