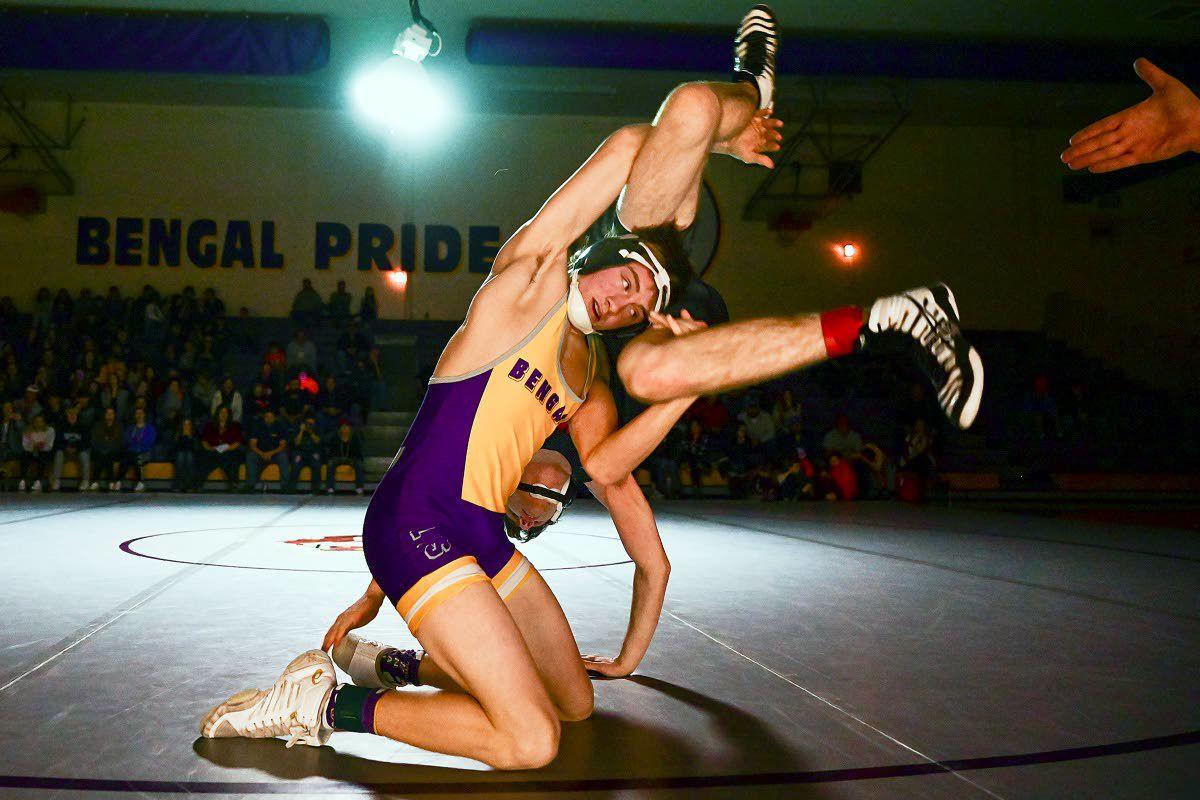 Gage Fiamengo of Lewiston tosses Mick Brown over his shoulder. 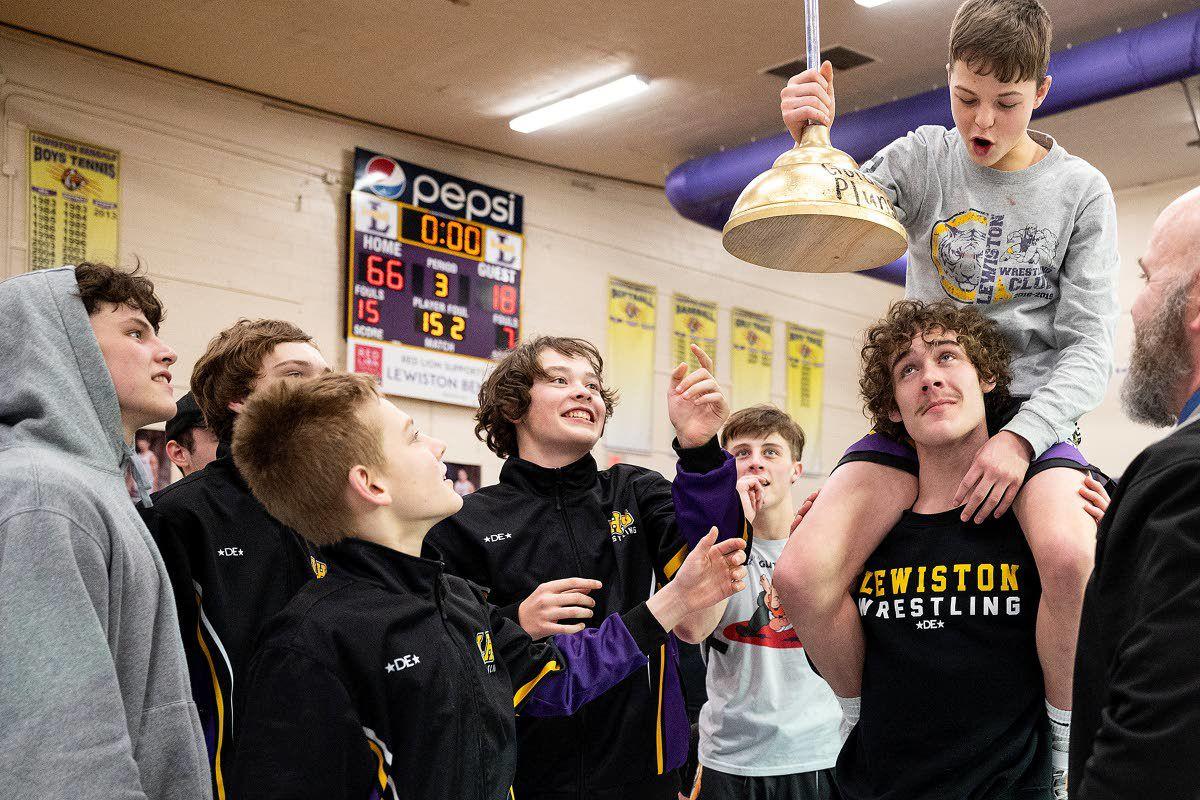 Lewiston's Tristan Bremer holds the Golden Plunger trophy as he sits atop the shoulders of teammate Reuben Thill after the Bengals beat Clarkston 66-18 in a nonleague dual meet on Thursday night at Booth Hall in Lewiston.

Gage Fiamengo of Lewiston tosses Mick Brown over his shoulder.

Lewiston's Tristan Bremer holds the Golden Plunger trophy as he sits atop the shoulders of teammate Reuben Thill after the Bengals beat Clarkston 66-18 in a nonleague dual meet on Thursday night at Booth Hall in Lewiston.

Lewiston High’s Jake Skinner brought the energy to a max with what Bengals coach Stuart Johnson called a match “that set the whole team on fire.”

Skinner earned a hard-fought decision at 160 pounds, and from that point on, Booth Hall — packed to the brim — egged on each and every Lewiston wrestler.

And they just kept winning. Not two hours passed, and the Bengals were celebrating at the center of the mat with the coveted, gilded bathroom essential.

Lewiston rebounded from a Golden Plunger loss last year, and took down every Clarkston opponent on Thursday night to earn a 66-18 dual victory — all of the Bantams’ points were procured by forfeits.

“(Skinner’s) match just really set the tone for the dual,” Johnson said. “It was unbelievable. We blanked ’em. I never thought we’d win every match.

“The crowd was incredible, one of the loudest crowds we’ve had.”

Lewiston logged six pins, a technical fall, a major decision and a minor one. It also got 18 points from forfeits, but it didn’t need them.

After Skinner, Damon Shaw — a Clearwater Classic champion — willed his way to a pin against Will Sliger, who “put up a real fight,” Johnson said.

“(Shaw is) kind of a brute, he powers through things, and that’s what he did,“ Johnson said.

Fellow Clearwater Classic champion Reuben Thill continued to impress, as he dug out a pin in just over five minutes against Clarkston’s Ryain Paige.

Johnson said Thill kept a cool head, just like he had at the Clearwater tournament.

After forfeits at 195, 220 and 285, the Bengals got three of their own at the lighter weight classes. They moved up usual-113-pounder Tristan Bremer — “one of our superstars,” Johnson said — to 120 because of an illness on the team.

“We were worried if we gave up momentum at that point, that it could kinda change the tone of the dual,” Johnson said of his decision to move Bremer up.

At 126, Gage Fiamengo took a pin in “the battle of his life.” At one point, Johnson said, it looked like Fiamengo might be down for the count, but some prodding from assistants and teammates “triggered him, and calmed him down.”

“That kid Gage wrestled (Mick Brown), he came out to wrestle,” Johnson said.

Landon Bennett followed it up with a technical fall.

Senior Noah Jones, in his first year with the program, shrugged off some early-season knocks and pinned Tanner Lange in 4:44.

“He persevered, then pulled out he pin,” Johnson said. “The crowd was just roaring.”

Jones’ brother, Rockwell, took control of his bout with Adam Caudle, and came up with yet another pin for the hosts, this one in just under four minutes.

Logan Hunt, a senior captain for Lewiston, prospered with cuts, with which he wore down Clarkston’s Nate Benton in a major decision win.

“He was one of the leaders pushing people to come in during summer workouts,” Johnson said. “(Benton) fought him off again and again, but he just kept going and going.”

Johnson, a second-year coach for the Bengals, was unsure of when the last time the Bengals won each of their matches — not counting forfeits — and figured it was in 2012, when Lewiston won a state title.

The plunger, also in its second year, might not exactly that same weight, but it’ll be carried proudly today by Bengal grapplers at the Golden Throne basketball tournament, then placed prominently at Lewiston High.

“I told the wrestlers, ‘We all gotta be there to help push our teams through,’” Johnson said. “We’ve done our part, now we’re hoping we can boost their spirits, too.”