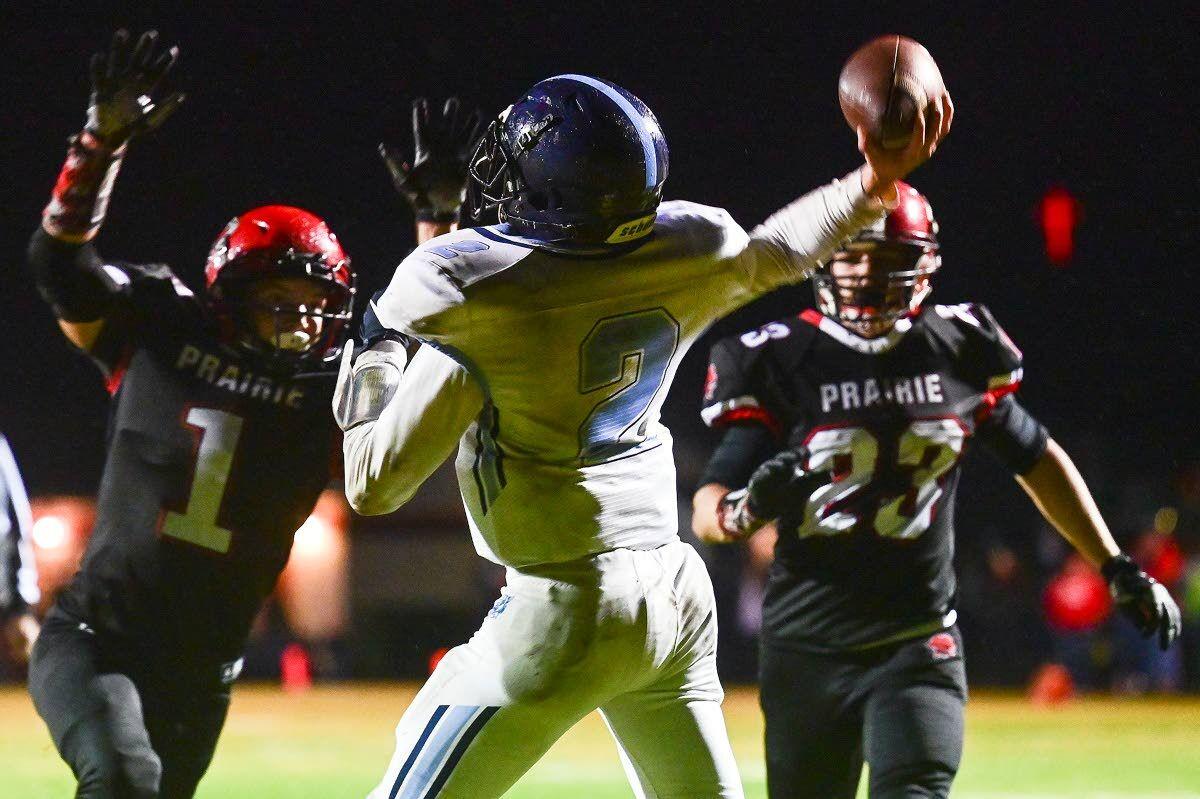 Prairie’s TJ Hibbard, left, and Chase Kaschmitter, right, pressure Lapwai quarterback Titus Yearout as he attempts a pass from near his own goal line during the second quarter of Friday’s Whitepine League Division I game in Cottonwood. 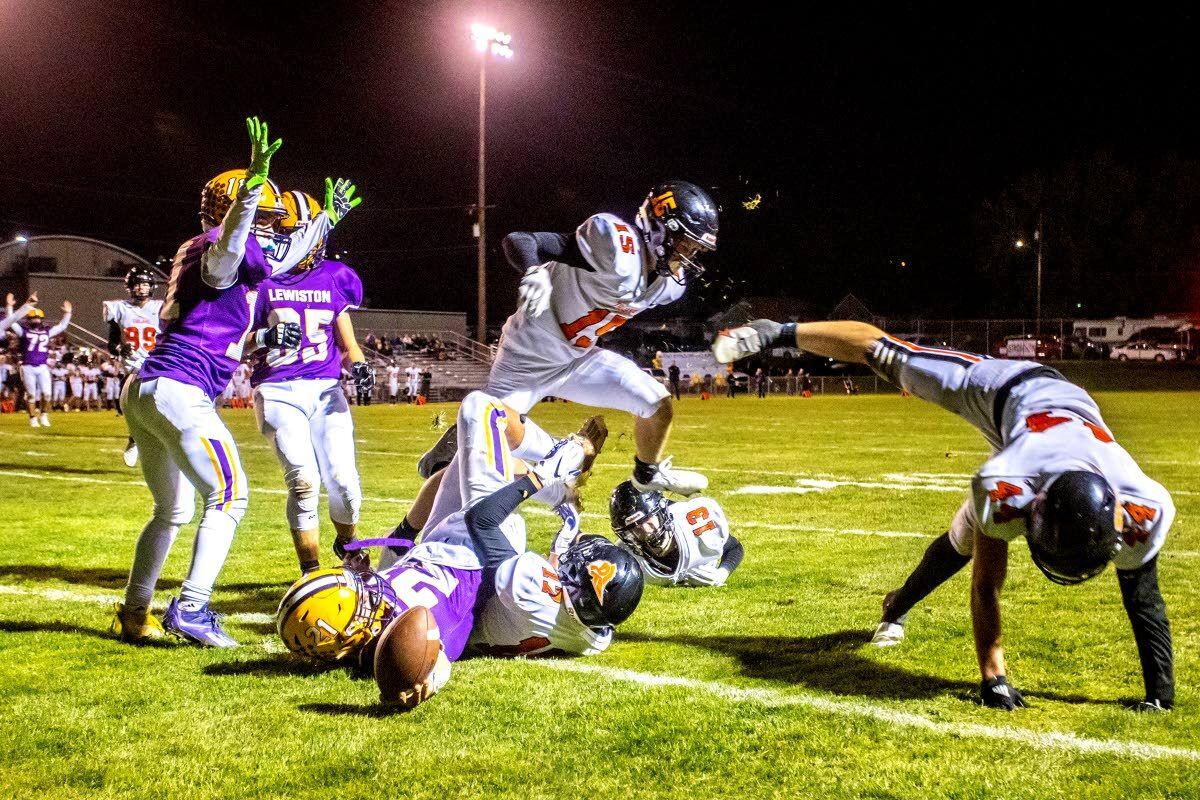 Lewiston running back Cruz Hepburn falls back into the end zone for a touchdown during Friday’s Class 5A Inland Empire League game against Post Falls at Bengal Field.

Prairie’s TJ Hibbard, left, and Chase Kaschmitter, right, pressure Lapwai quarterback Titus Yearout as he attempts a pass from near his own goal line during the second quarter of Friday’s Whitepine League Division I game in Cottonwood.

Lewiston running back Cruz Hepburn falls back into the end zone for a touchdown during Friday’s Class 5A Inland Empire League game against Post Falls at Bengal Field.

This weekend’s high school football schedule will further dictate where teams will be at the end of the season. For some, a win will mean a trip to the postseason. For others, it’ll mean a transition to winter sports.

With that, here’s a closer look at this week’s most intriguing matchups:

Prairie is coming into its matchup at Genesee at 7 p.m. on Friday with an opportunity to win the Whitepine League Division I outright with a victory.

“We have to come out with the same effort and energy that we came out with against Lapwai,” Prairie coach Ryan Hasselstrom said. “They like to throw the ball and they have an elusive quarterback. We have to change a few things in order to contain them and put points up.”

Genesee (5-1, 5-1) is led by quarterback Angus Jordan and the receiver duo of Cy Wareham and Nolan Bartosz.

“Having two standout receivers is a huge advantage,” Genesee coach Justin Podrabsky said. “You’re not able to focus on just one guy, it allows us to look at two matchups every play. The safety will follow one guy which will put Cy or Nolan in a one-on-one situation and that’s not ideal for any defensive back.”

“We need to cover well and bring pressure,” he said. “They know we need to bring pressure so they’ll probably do some quick hits on the outside. Their running back is also really good so we’re going to do everything we can to slow down what they do offensively.”

Genesee running back Jack Johnson also has been a crucial part of the Bulldogs’ offense according to Podrabsky. But, he’s been a bigger leader on defense.

“Jack has stepped up on defense, Cy and him are the leaders,” he said. “They’re doing a great job on both sides of the ball while holding their teammates accountable.”

“We’re used to having a target on our back,” he said. “We know everybody is going to give us everything they got. They’ve all played in playoff games and have a lot of experience in playing in big games. It’s a real resilient bunch of kids.”

Podrabsky said the Bulldogs need to limit mistakes on both sides of the ball.

“We’re going to have to control the ball and limit big plays,” he said. “We got to bring pressure and limit our turnovers, we don’t want to give them an extra possession because they’re so dynamic.”

The Bengals sealed its first victory against Post Falls during the Matt Panceri era this past Friday. In two days, they’ll have a chance to punch their ticket to the state tournament for the first time since 2016, if they can beat Lake City at 7 p.m. in Coeur d’Alene.

Lewiston (6-1, 1-0) needs to stick to the script in order to win its second league game, Pancheri said.

“We’re sticking to the pattern that has been successful,” he said. “We don’t plan on changing much. We live or die by things that go well. We had a good week of practice and hopefully, that carries over to Friday.”

Lewiston’s bread and butter this year has been the run game. It’s rushed for more 2,000 yards as a team, an average of 336 yards per game.

A victory would secure at least the No. 2 seed in the North in the 12-team state tournament.

Pullman (2-4, 2-1) had a rough start to its season, but is starting to find its footing now that league competition is underway. They’ll get another test at 2 p.m. Saturday against Shadle Park at Union Stadium in Spokane.

“We went out and found teams that would test us,” Pullman coach David Cofer said. “We didn’t know when we’d start to find our groove but, I think it happened during the West Valley game. (Quarterback) Riley Pettitt has done a great job at rebounding from a tough stretch at the beginning of the season.”

“We’ve trimmed down our playbook to feature more quick passing concepts and he’s strived on that,” he said. “We eliminated long developing plays and the quick reads have done wonders.”

Shadle Park (3-2, 3-0) is a team that eliminates the big plays defensively and relies on it offensively. So, the nickel and dime strategy of Pullman should be in full effect.

“It’ll work to our benefit for sure,” Cofer said. “It works really well with what they want to do offensively. The way they play defensively and the way our offensive is structure will allow our receivers to make a big play in space. Riley just has to get them the ball.”

Orofino and Grangeville are battling inside the Class 2A Central Idaho League for an appearance at the state tournament at 7 p.m. Saturday at Grangeville High School.

“Judging by the way things are going, this will be a huge game,” Grangeville coach Jeff Adams said. “I’m really excited to finally play a 2A opponent. We’ve been playing above our classification during our nonleague schedule.”

For most teams they credit a quarterback, running back, or perhaps a star receiver when talking about offensive production, but Adams said his offensive line is what makes the Bulldogs (1-4) special.

“It probably isn’t the popular thing to say, but the offensive line is playing out of their mind,” Adams said. “I love those guys and they’re not very big, but they get after it. They’ve only given up one sack all year. Quincey Daniels, our guard, is so good. He’s one of the best guards I’ve ever coached.”

As far as skill positions, the offense goes through returning CIL offensive player of the year Caleb Frei.

“He’s a punishing back with great speed with a chip on his shoulder,” Adams said. “For him to have such a good offensive line this year is a game-changer. He’s a downhill runner who has trust in his line to open up a hole for him at any given moment.”

“I think we’ve got better up front, we’re extremely young,” said Bretz, whose Maniacs also enter at 1-4. “They’re going to have to focus on their responsibility and do their job.”