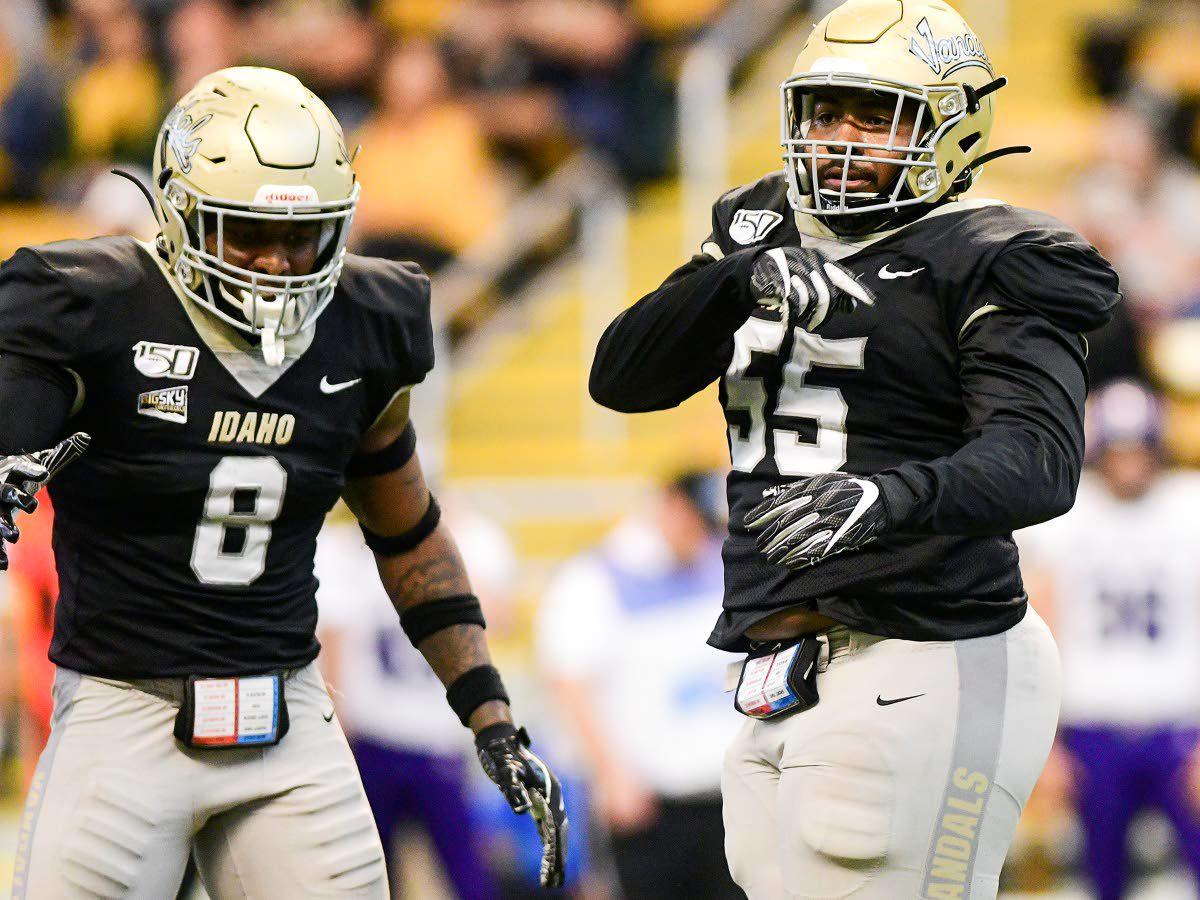 In this Oct. 5, 2019, file photo, Idaho defensive tackle Rahsaan Crawford (right) celebrates with Tre Walker after assisting on a tackle during a Big Sky game against Weber State at the Kibbie Dome in Moscow. 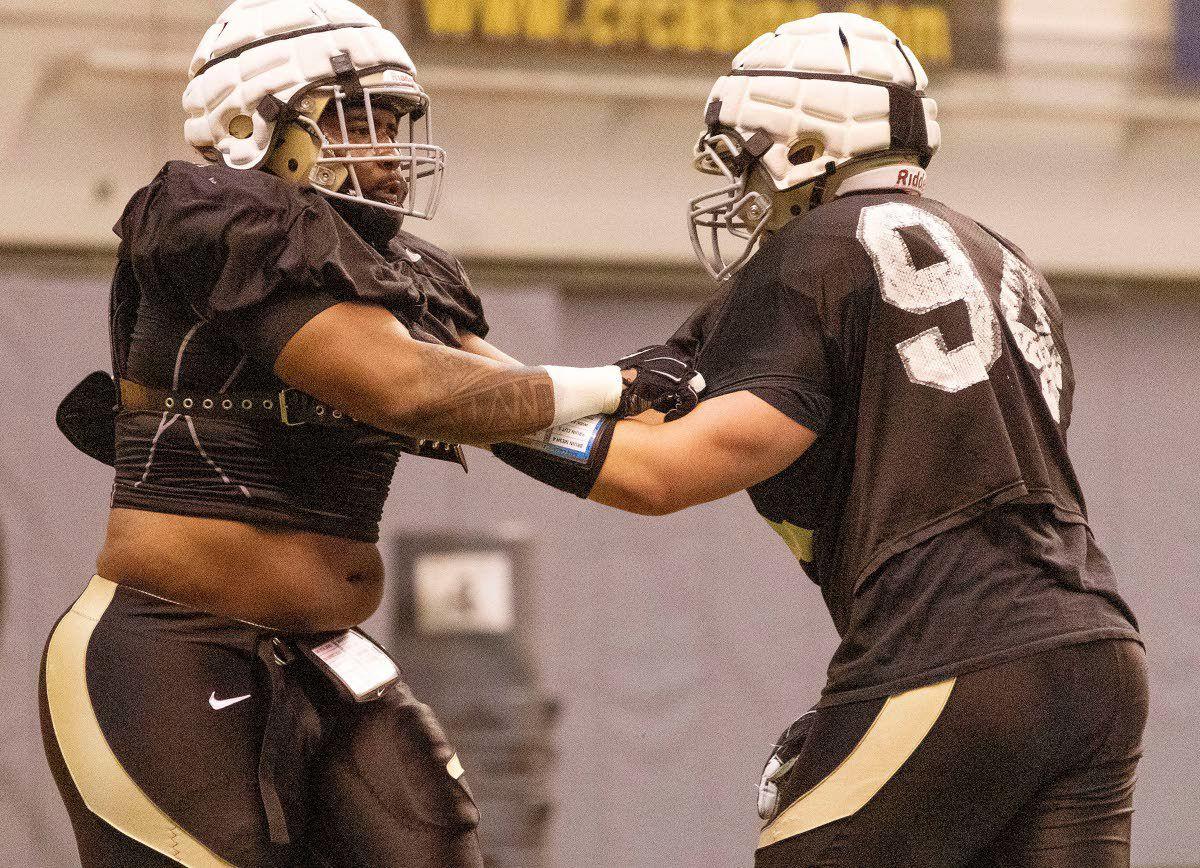 In this Oct. 5, 2019, file photo, Idaho defensive tackle Rahsaan Crawford (right) celebrates with Tre Walker after assisting on a tackle during a Big Sky game against Weber State at the Kibbie Dome in Moscow.

This is far from a traditional introduction to life in the real world for Idaho’s Rahsaan Crawford.

But then again, the astute nose tackle has been known for living outside the box of presumed regularity — from his past to his present, “Big Saan” is certainly a unique individual on the Vandals’ football team, with a distinctive story.

“Things have totally changed for me,” he said. “But it’s cool. I’m adjusting, riding the wave and seeing where it takes me.

“It’s been a journey. It’s definitely taken some unexpected turns, and it’s not over. We’re absolutely gonna see it all the way through.”

Crawford, in the midst of the coronavirus pandemic, has been living and learning in Moscow, as well as working 40-hour weeks at Walmart, where he’s tasked with gathering thousands of orders for online patrons. Meanwhile, he’s set apart time for videoconference meetings with UI’s staff, and for specific workouts. During lunch breaks, he devours game film.

“You’ve gotta get it where you can these days,” Crawford said.

With campus lockdown beginning to ease incrementally, he’ll be returning to a somewhat routine schedule shortly. Yet Crawford, by nature of his philosophical spirit, has used his work time in reflection.

“I went from lifting and going to class every day to clocking in,” said Crawford, who applied for the job — and got it within a day — to have a paycheck while living away from home heading into his senior season. His mother, Kasi, has moved to Florida with her fiance, so Crawford opted to remain up north, 2,400 miles from his hometown of Tucker, Ga., just outside Atlanta.

“It’s a completely different atmosphere. You really start to see people in the real world.

“I was coming off a great offseason, and ready to go into spring ball, and now I’m working 40 hours. So even though I’m still active, there’s a transition that comes with it psychologically. I have to manage that, and overcome that.”

Soon, his responsibilities as a Division I football player and defensive captain for the Vandals will overtake his work duties. Crawford, standing 5-foot-10 and weighing a sliver under 300 pounds, is a tone-setter for UI, and undeniably a vocal leader — particularly for newcomers in need of a mentor.

“We have to make sure guys are bought in. That’s a natural expectation. You wear that badge of honor the more time you spend as a Vandal,” he said. “My individual goal, as a leader, is to make sure guys are ready when we get back. We have to have the same goals, we have to make sure that process is as swift and efficient as possible, so we can get back to those individual goals. You have to be a team first, and our team has been hit with unexpected right jabs and left hooks.”

Crawford precisely is what coaches seek in a run-stuffing, gap-plugging tackle. He understands schemes and can read tells on the offensive line with the best of them.

But he doesn’t get wrapped up in football lingo. He’s more keen on figurative language and frankness, like the importance of momentum.

He breaks down his sport into digestible steps, often implementing a mix of colorful imagery and analogies. Crawford’s careful assessments and honest opinions have made him a news-conference favorite.

He epitomizes his captain role by setting the pace.

“Just being physical at the point of attack,” he said of his proudest trait, which was on display when he provided a game-opening spark for UI's defense with a hard TFL against Idaho State in October, paving the way for a three-touchdown day from UI's defense.

“It’s a physical position, so it’s me vs. you for the whole game. Who puts their hands on who? Who dominates who? I want to be the guy who answers the call. When it comes to hitting drills, I’ll be the first guy in the group. I like to pop it off.”

Crawford, entering his third year as a starter, has 50 tackles, including two for loss, so far — while mostly taking on double-teams. He said his professional aspirations can be fulfilled by simply putting more pressure on opposing quarterbacks.

“Point blank, that’s what it is. Not gonna sugarcoat it,” he said.

On the other side, he serves a vital role on punts as a shield for Cade Coffey. In short-yardage situations, Crawford sometimes enters as a fullback.

Part of his understanding of O-line tendencies arises from his past — he was an offensive lineman for three years at Tucker High School. Crawford was recruited for defense, but midway through his redshirt freshman season in 2017, was moved to guard, where he started against Georgia State in the season finale.

“I didn’t even play D-tackle until my senior year,” he said.

At Tucker, a powerhouse program in a football hotbed, Crawford started on the varsity team as a sophomore, a rare feat. The Tigers had Power Five prospects ahead of him on defense, including Jonathan Ledbetter, now of the Miami Dolphins.

“I think we signed 17 guys (to college offers) my freshman year. It was ridiculous; they produced a ton of talent,” Crawford said. “I was playing out of position, just waiting my turn, but I got to play in a state championship as a sophomore.”

He said he began to visualize his potential after earning a first-team nod so early on an uber-competitive team. By his senior year, “I was well-rounded, and seasoned at a top-tier program.”

Even then, he was recruited lightly, and only after he’d completed his high school career. Football Championship Subdivision teams Tennessee-Chattanooga and Western Carolina were his best potential landing spots for a time. He was considering trade school, until UI — then a member of the Football Bowl Subdivision — contacted him through former defensive line coach Kenny Holmes.

“I was like, ‘Man, I’ve never really heard of the Vandals,’” he laughed. “Not trying to sound ignorant, but I’d never been outside (Interstate) 285. That’s the circle that keeps you inside Atlanta.”

He took a February recruiting trip to iced-over Moscow, accompanied by his mother. Crawford said the Vandals appealed to him because “they were also recruiting her, asking if she was OK, and if she liked the atmosphere.”

“I come from a single-parent household. My mother struggled individually to get me to where I am now,” he said. “... So that won me over. No other university was doing that at the time. I’ve been 100 percent bought-in ever since.”

That’s not to say it was easy. Of course — living in a place culturally unlike Atlanta — there were growing pains. But, almost predictably, Crawford used his new environs to his benefit.

“I’d literally do it all over again,” he said. “If I would’ve gone to an HBCU or something, I would’ve been comfortable, but I wouldn’t have grown intellectually like I have. Coming out here, I got out of my comfort zone. I was around people who don't look like me, talk like me, eat the same food, listen to the same music. It was like I had to adjust to that.”

Because so, he’d spent much of his rookie year “in solitude,” generally at the library. Although he’s now exceptionally sociable, Crawford still is wont to “go down rabbit holes,” and educate himself alone on any imaginable subject. As of now, he’s reading up on gardening. His personal favorite? Ancient Egyptian ideologies, which coincides with his philosophy emphasis.

Crawford wrapped up a degree in broadcasting and digital media this spring, and he’ll begin a graduate degree in public administration this year. For his post-football occupation, he’s thinking about sports commentating, or perhaps athletic administration — both ideal fits for his personality. ESPN was all that was on his television growing up.

“Personally, I like to reach for the stars,” he said.

And beginning shortly, he’ll be back to guiding the Vandals in their quest to achieve FCS relevance.

“I’m anxious to see it all the way through, get back with the guys and get after it,” Crawford said. “I’m ready to turn the page, and see what the next chapter has in store.”