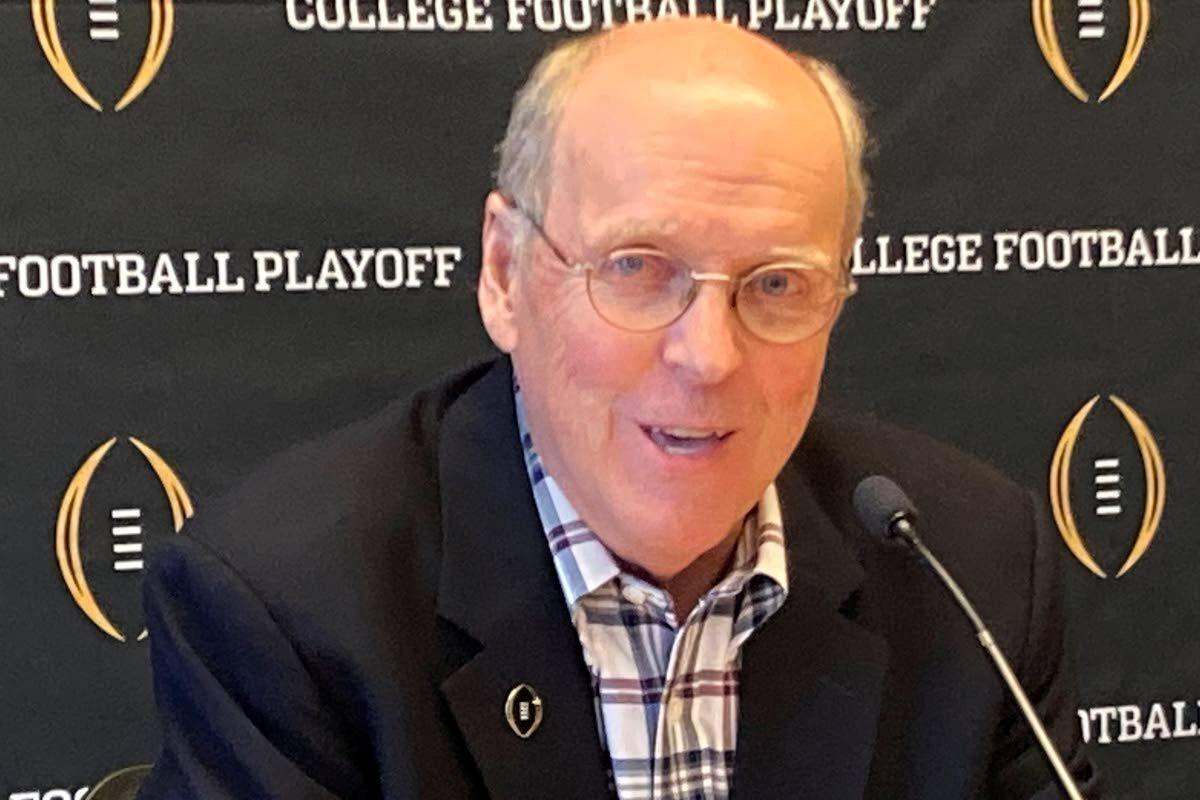 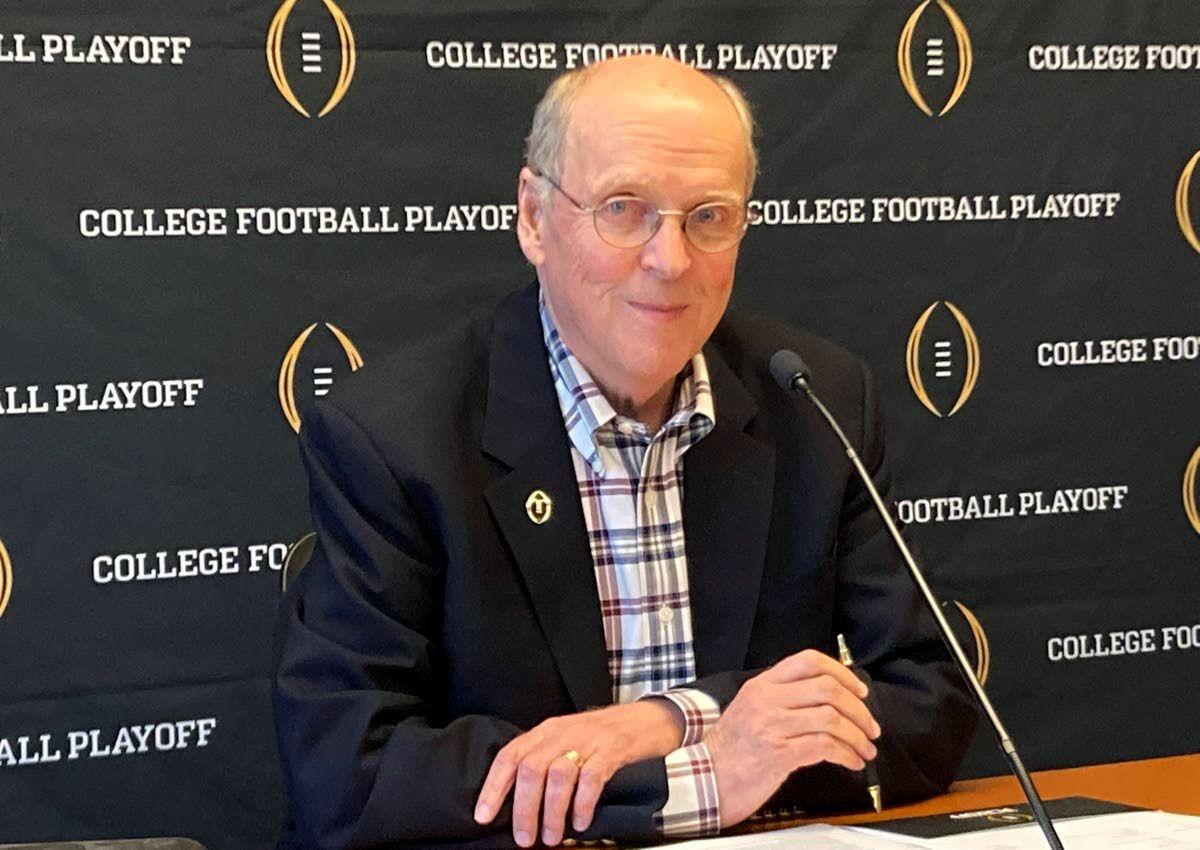 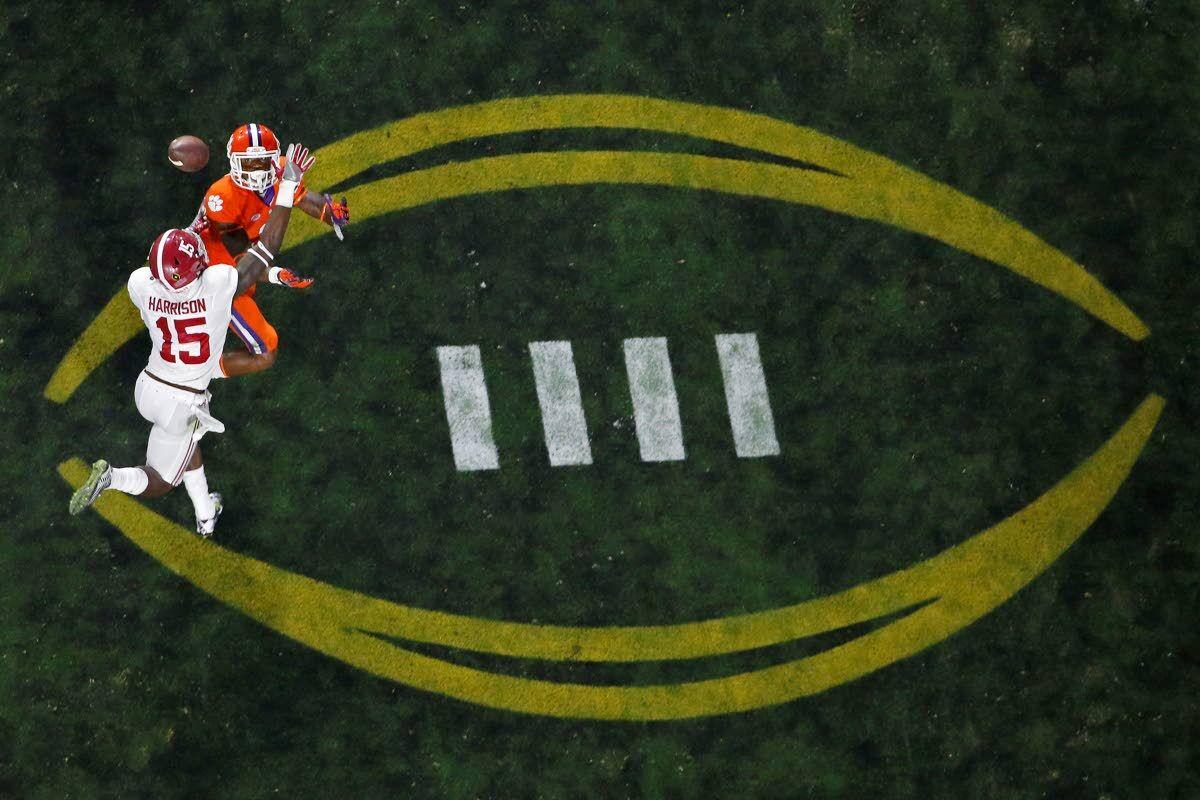 FILE - Alabama's Ronnie Harrison (15) breaks up a pass intended for Clemson's Artavis Scott during the second half of the NCAA college football playoff championship game in Glendale, Ariz., in this Monday, Jan. 11, 2016, file photo. The College Football Playoff would expand from four to 12 teams, with six spots reserved for the highest ranked conference champions, under a proposal that will be considered next week by the league commissioners who manage the postseason system, a person familiar with announcement told The Associated Press on Thursday, June 10, 2021. The person spoke on condition of anonymity because the CFP has not yet released details. (AP Photo/Ross D. Franklin, File)

FILE - Alabama's Ronnie Harrison (15) breaks up a pass intended for Clemson's Artavis Scott during the second half of the NCAA college football playoff championship game in Glendale, Ariz., in this Monday, Jan. 11, 2016, file photo. The College Football Playoff would expand from four to 12 teams, with six spots reserved for the highest ranked conference champions, under a proposal that will be considered next week by the league commissioners who manage the postseason system, a person familiar with announcement told The Associated Press on Thursday, June 10, 2021. The person spoke on condition of anonymity because the CFP has not yet released details. (AP Photo/Ross D. Franklin, File)

ROSEMONT, Ill. — College Football Playoff expansion took another step forward Friday as the full group of commissioners who manage the postseason system wrapped up two days of digging into a plan for a 12-team format that would revamp the national championship.

The first debate about what the final version of a new playoff will look like has emerged: The Pac-12 is pushing for each Power Five conference to receive an automatic berth.

“This is the beginning of a long, ongoing process,” Big 12 commissioner Bob Bowlsby said as he departed Big Ten headquarters in suburban Chicago. “It’s going to be months before we come to any closure on any of this.”

There is no announced timeline and the earliest expansion would be possible is 2023 if there are no big snags. Change could be as far out as the 2026 season after the current media rights contract with ESPN expires. The proposal put forth by a subcommittee that included Bowlsby does not address when a new format could be implemented.

“The working group intentionally did not get into it. They wanted to put a proposal in front of the management committee that the committee could consider without having the shackles of trying to figure out when to implement it,” CFP executive director Bill Hancock said. “The group this week didn’t get into implementation time in a significant way. That will come later.

“The first step is determining whether this new format is feasible or something the people on campus want to do.”

Last week, the CFP unveiled a plan to expand from four to 12 teams. Six spots would be reserved for the highest-ranked conference champions, but no league automatically would qualify. The other six teams would be chosen at-large from the selection committee’s rankings. The plan calls for first-round games on campuses and quarterfinal- and semifinal-round games played at bowls.

“You can imagine how many pages of notes I have on two years of work. And that’s what we’re trying to bring everybody else up to speed with,” Bowlsby said.

This week’s meeting was the first chance for the entire 11-person management committee to discuss the proposal in person. The other members include the commissioners of the Big Ten, Pac-12, Atlantic Coast Conference, American Athletic Conference, Conference USA, Sun Belt and Mid-American Conference.

“Four of us were at one place. Now, I think we have 11 of us at that place,” Bowlsby said. “Now, we move to talk to the presidents and see if we can get them at that place.”

“The good news is everyone who’s on this conference committee supports expansion. So we’re aligned on that,” said Kliavkoff, who attended the meeting along with outgoing Pac-12 commissioner Larry Scott.

But the Pac-12 also made clear what it wants in the early going: In a statement, Scott said: “The Pac-12 supports expansion of the CFP and believes that the Autonomy Five champions should annually qualify for the CFP. .... We now look forward to reviewing the expansion proposal more thoroughly with our members, student-athletes, partners and other key stakeholders.”

Another part of the plan that still needs to be worked out is how bowls can continue to be incorporated in the playoff. Especially the Rose Bowl, the oldest and most prestigious postseason game that traditionally matches Big Ten and Pac-12 schools in Pasadena, Calif., on Jan. 1.

“The Rose Bowl hopefully will be part of this,” Kliavkoff said. “They are very focused on making sure that their historic time is protected. And continuing to have the relationship they have with the two conferences.”

Next week, the group reconvenes in Dallas to present the plan to the CFP’s board of managers, the university presidents who have final say on what would be a momentous change in college football, with financial ramifications for bowls and conferences alike.

Before anything becomes a done deal, the commissioners want to hear from their local constituents: athletic directors, coaches and players. What do they think about all this?

“This is an enormous undertaking with dozens and dozens of moving parts and it’s not going to be a rapid process,” Bowlsby said. “This is going to be at least (this) fall before we have the necessary conversations and possess the necessary information to make informed decisions.”