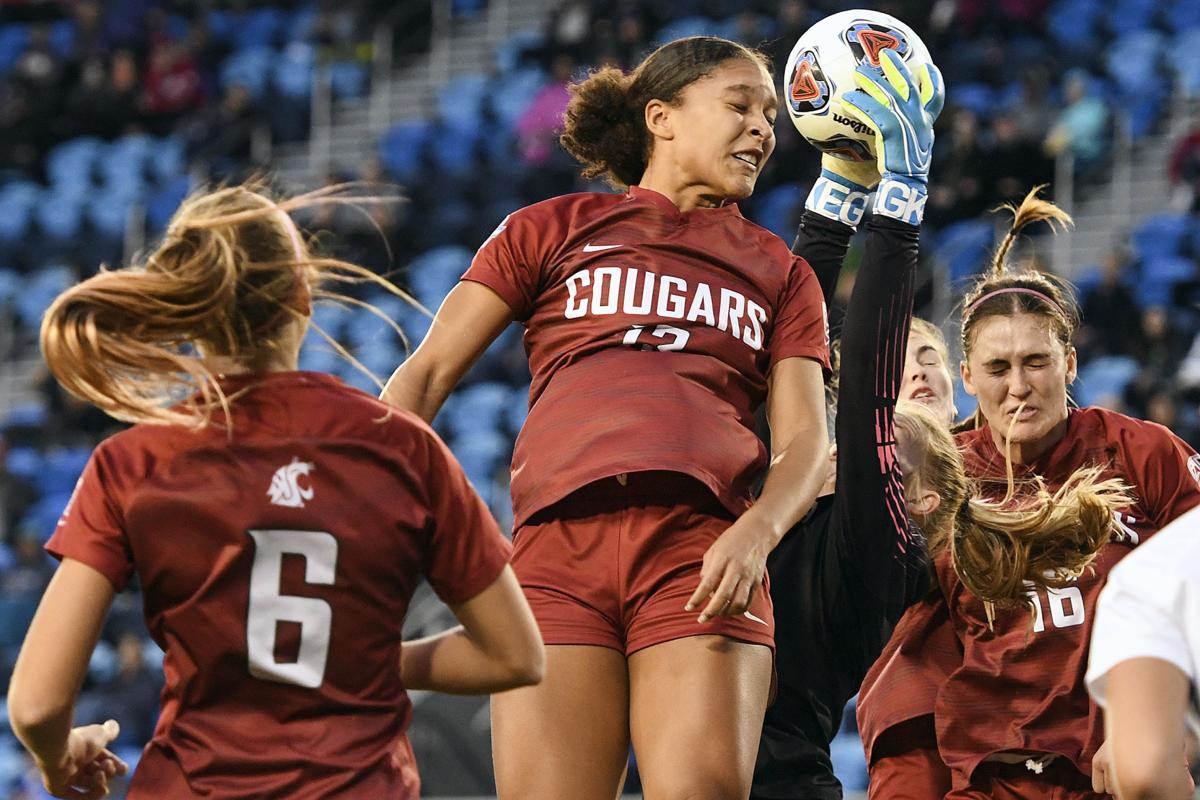 Washington State forward Elyse Bennett (13) nearly gets her head on a corner kick as North Carolina goalkeeper Claudia Dickey (0) snatches the ball away from danger during the first half a 2019 NCAA Women’s College Cup semifinal game on Friday evening at Avaya Stadium in San Jose, California. 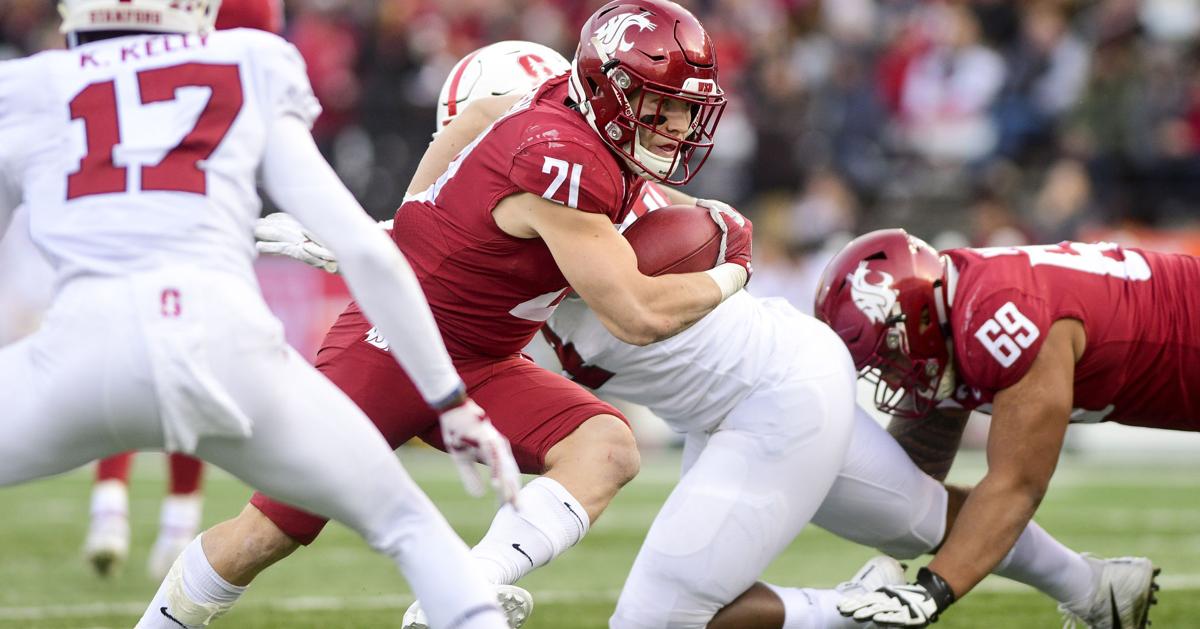 Washington State running back Max Borghi splits through the Stanford defense on a run up the middle during a Pac-12 Conference game on Saturday, Nov. 11, 2019, at Martin Stadium in Pullman.

Washington State forward Elyse Bennett (13) nearly gets her head on a corner kick as North Carolina goalkeeper Claudia Dickey (0) snatches the ball away from danger during the first half a 2019 NCAA Women’s College Cup semifinal game on Friday evening at Avaya Stadium in San Jose, California.

Washington State running back Max Borghi splits through the Stanford defense on a run up the middle during a Pac-12 Conference game on Saturday, Nov. 11, 2019, at Martin Stadium in Pullman.

The Pac-12 announced the cancellation Friday of all nonconference games and matches in several fall sports, including football, and said this will mean a delay in the start of the fall seasons in those sports.

The conference also confirmed that athletes in all sports during the 2020-21 school year — not just in the fall — will have their scholarships honored if they elect to avoid team activities out of concerns about the coronavirus pandemic.

The story first was reported by the Athletic.

In a separate announcement later in the day, the Pac-12 divulged that its commissioner, Larry Scott, had tested positive for the coronavirus and is in self-quarantine. He had undergone a test after experiencing flu-like symptoms. Scott is self-quarantining at the request of his doctors, but still is carrying out the duties of his office, the conference said in a statement. He’s just doing it remotely.

For Washington State, the Pac-12 decision forces the cancellation of nonleague football games at Utah State on Sept. 3 and at Pullman against Houston and Idaho on Sept. 12 and 19. School athletic director Pat Chun already has been in contact with those schools, a WSU spokesman said shortly after the Pac-12 announcement.

Besides football, the Pac-12 sports affected are volleyball and men’s and women’s soccer. The Cougars don’t have a men’s soccer program.

There’s been a spike in COVID-19 cases throughout the country in recent weeks. Just Thursday, Idaho and Oregon saw their amounts of total cases hit their high-water marks.

The Pac-12 move, coming a day after the Big Ten took a similar step, acknowledges a national resurgence in the spread of the coronavirus has prompted a revision of the league’s plan for gradually resuming fall sports activities. So the WSU football team, contrary to the timetable announced in June, won’t be allowed to begin mandatory workouts today.

The decision also underscores the volatility of the pandemic and the possibility major conferences might eventually follow the cue of the Ivy League and cancel fall sports activities altogether. The Pac-12 said it “hopes to play football” if it can do so safely.

“Our decisions have and will be guided by science and data,” Scott said in a statement, “and based upon the trends and indicators over the past days, it has become clear that we need to provide ourselves with maximum flexibility to schedule, and to delay any movement to the next phase of return-to-play activities.”

For football, it wipes out 36 nonconference games. Among those were Alabama-USC and Michigan-Washington on Sept. 5, Ohio State-Oregon on Sept. 12, Stanford-Notre Dame on Oct. 10 and Notre Dame-USC on Nov. 28.

The conference said it has developed a series of scheduling models for the fall and will announce details of a conference-only plan by July 31. There was no indication if the conference intended to revise or augment the original football schedule for league games. In any case, the season won’t begin as early as planned.

That was the right move, according to Scott R. Jedlicka, an assistant professor in the department of educational leadership and sport management at the college of education at Washington State and creator of covidcfb.com, a tracking website on the impact of the coronavirus and its impact on major college football.

“There are certainly good public health-related reasons for the Pac-12’s decision,” Jedlicka said in an email. “Reducing the number of games and the travel associated with those games will greatly decrease the risk of super-spreader incidents. But more than anything, this is a move to buy time. Like other major conferences, the Pac-12 does not want to prematurely give up on the season and forgo whatever revenue can still be generated through playing football. At the same time, it does not want to be perceived as prioritizing that revenue over the safety of players and basic public health. This decision also provides some flexibility when it comes to scheduling each team’s nine games, if last-minute postponements become necessary.”

It is still unclear how exactly the cancellation will affect Idaho, in terms of the guarantee game payout that was supposed to be coming from Wazzu.

“First, I appreciate Pat Chun calling me earlier today to personally tell me of the Pac-12 decision,” UI athletic director Terry Gawlik said in a statement. “We’ll continue to adapt our plans as necessary in preparation for the upcoming season. With so many options still on the table for the upcoming year we’re still working to determine exactly how this decision will impact us. We continue to be mindful of the health and safety of our student-athletes and staff and will make decisions accordingly.”

Donn Walden and Colton Clark contributed to this report.