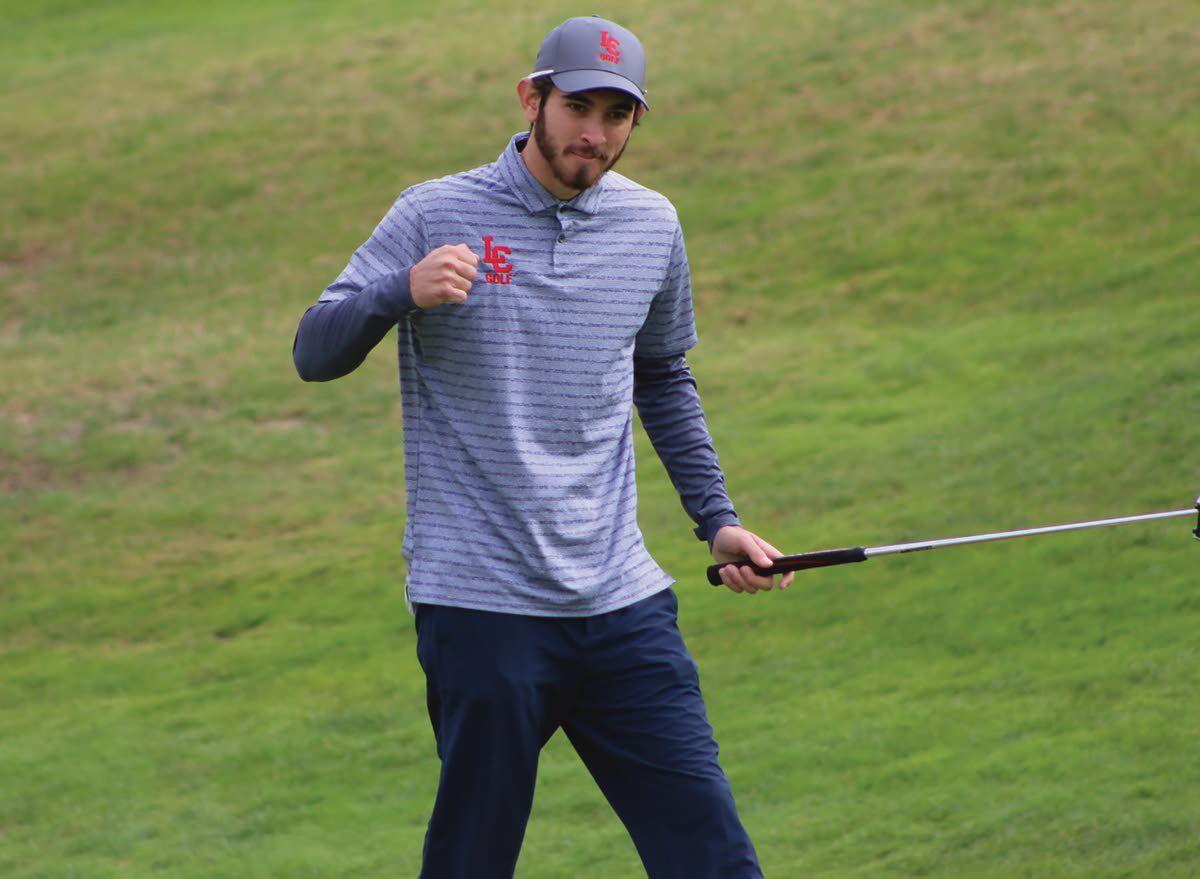 Lewis-Clark State sophomore Carlos Davila celebrates holing a shot during the Warrior Invitational in the fall at the Lewiston Golf and Country Club. 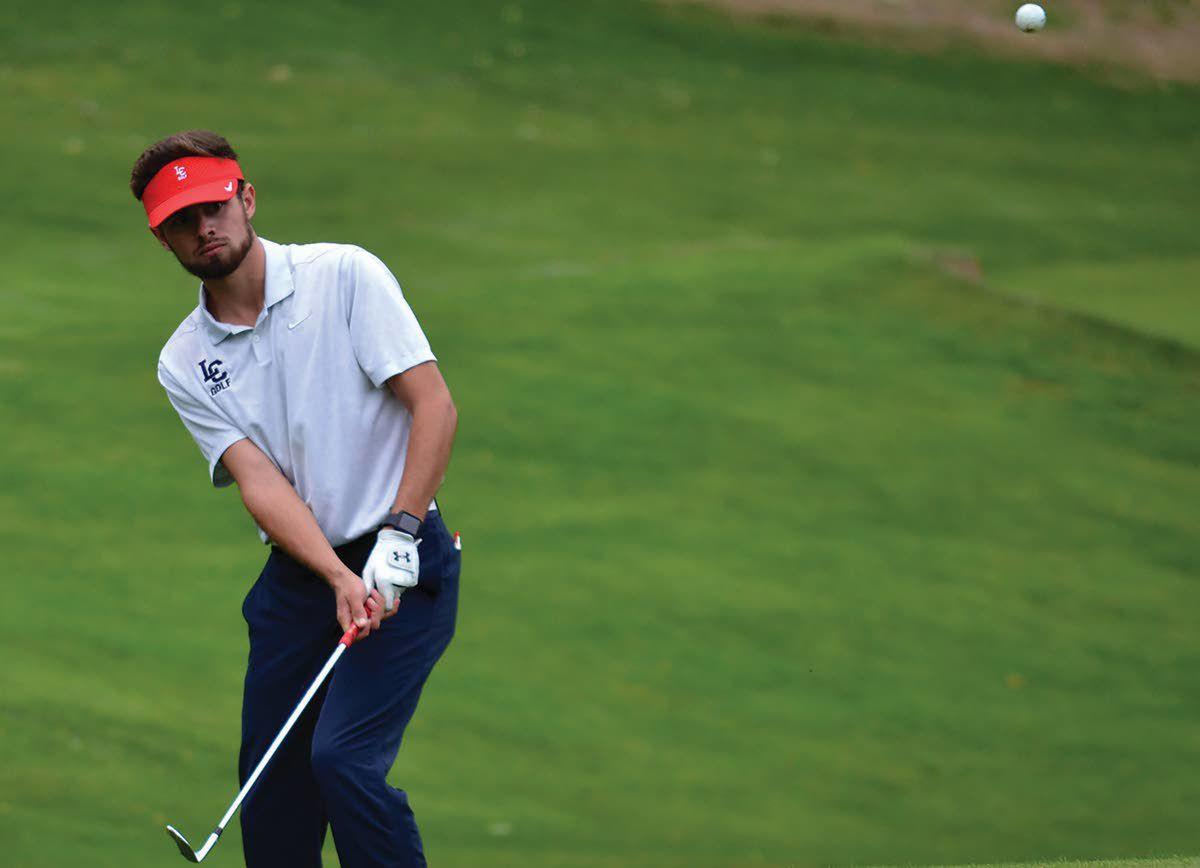 Lewis-Clark State sophomore Carlos Davila celebrates holing a shot during the Warrior Invitational in the fall at the Lewiston Golf and Country Club.

At age 2, Lewis-Clark State’s Carlos Davila would sit on his bed, chipping plastic golf balls into the hallway for his mother to retrieve.

Two years later, he was beginning to piece together layouts of golf courses as he was tagging along with his golfer parents, and he often set down balls to putt. At age 5, he already was enrolled in junior tournaments.

By the time Davila was in his early teens, he’d received an invite to compete with a Mexican junior national team, and was taking part in notable international amateur events far from his hometown of Cordoba, Veracruz, Mexico.

“Both sides of my family played — my parents even met playing golf, and both my sisters played,” said Davila, the Warriors’ star sophomore who led the Frontier Conference in tournament scoring average (71.78) this past fall and was the league’s Freshman of the Year in 2018-19. “I was just raised in a golf family. There was golf here and there, everywhere.”

Davila’s older sister is former four-year LCSC standout Karina Davila, a 2016 graduate who’s now a golf assistant at Indian Canyon Golf Course in Spokane, working toward Class A membership as a PGA Associate. She was his avenue to Lewiston out of Cordoba, a city of around 140,000 in southeastern Mexico which had become a sort of neutral territory for feuding cartels when Carlos was a teenager.

“It’s sad to see ... I really wanted to get my ticket out of it,” said Davila, who’s taken up offseason residence in Puebla, about a two-hour drive from his parents’ home in Cordoba. “We’d always say, since there’s not a lot to do in Cordoba, a lot of great players have come from there (including his friend Raul Pereda, who’s ranked third on the PGA Latinoamerica’s points list).”

Karina, a talented junior amateur in Mexico as well, discovered the school through a recruiting service called College Prospects of America. She quickly came to appreciate L-C, where she majored in sports administration with a minor in coaching. The same goes for Carlos.

“It’s tough sometimes as a younger sibling to come where your older sibling had a special career,” said second-year LCSC coach Kyla Lien, who frequently played against Karina while competing for Rocky Mountain (Mont.). “But Carlos has done such a good job of making his own imprint.”

Before mirroring his sister’s path, Carlos was a 2016 Nationals Mexico team champion and Mexico prep Golfer of the Year, among other accolades. He was intent on golf as a vocation, so he finished his courses online while training at Florida’s Tom Burnett Golf Academy alongside “10 or 12 professionals practicing there.”

Throughout his teenage years, Davila played in a couple dozen junior tournaments, representing Mexico at international events like the 2015 Junior Masters at East Aurora Country Club in New York, which takes the cake as his favorite of the bunch because of its extravagance.

“It was all super fancy. We had to show up in suits for dinner,” he laughed. “The course was in incredible condition, and the pro members gave us their lockers for the tournament.”

As a golfer groomed from the outset, Carlos is the complete package. He is well-rounded — never relying on any one club, but he is fond of his 60-degree wedge. He’s creative and makes seamless adjustments in-play if needed. He’s been known to swap out his putter for a wedge, for instance.

“In one tournament, I wasn’t really feeling good with my putter, so I started putting with my wedge, and started making birdies,” Davila said. “Everyone was like, ‘Why would he do that?’”

Davila claimed his first first-place collegiate finish at the Warrior Invitational this past fall, winning by 11 strokes with three rounds in the 60s. He carded an improbable 11-under-par, a personal record. One of his birdies came on No. 18 at Lewiston Golf and Country Club during the third round. He plopped his first shot in the water, then landed his next on the green and holed a birdie putt from “16 or 17 yards away,” he recalled.

“He told me there was nothing wrong he could do that day,” Lien said. “That’s kinda what sets him apart: Each round, he figures out what he’s doing well, then uses it on a positive note.”

Davila absorbs coaching direction — perhaps taking note for his future career — but Lien also has been impressed with his drive to instruct. He’s not afraid to interject his thoughts on situational drills, which has fashioned a constructive “give and take” within the team.

“He’s very coachable, in that he’s going to listen, and if he thinks it should be done a different way, he’ll speak up,” Lien said. “Those kids are going to test you, but you’re going to have that good relationship. I think it’s great from a student-athlete standpoint.”

Lien sees Davila’s potential as one of “the top players in the nation these next couple of years.” Because of cancellations stemming from concerns about the coronavirus, he still will be a sophomore in 2020-21.

“We’re just hitting the tip of the iceberg,” she said. “He’s a very high-level player, and he’s been playing for a really long time, probably since he could walk. When I came in, my first thought was, ‘We’re lucky to have him here,’ because he could’ve gone to a higher level.”

Davila settled on LCSC after briefly considering the University of New Mexico in Albuquerque, where he’d played an amateur tournament. Two years after making his choice, he’s one of the NAIA’s best, and his World Amateur Golf Ranking is climbing.

If it weren’t for the coronavirus, Davila likely would have boosted his ranking with five regional amateur tournaments he was signed up for.

He was anticipating playing in a now-axed U.S. Open qualifier at Gold Mountain Golf Course in Bremerton, Wash., on May 4, with his caddie slated to be close friend and Pomeroy native Devon Caruso.

Until competition starts again, Davila will hone himself at local courses when he can. Zoning in on little but golf shouldn’t be a problem for the rising Warrior with a family background defined by the sport.