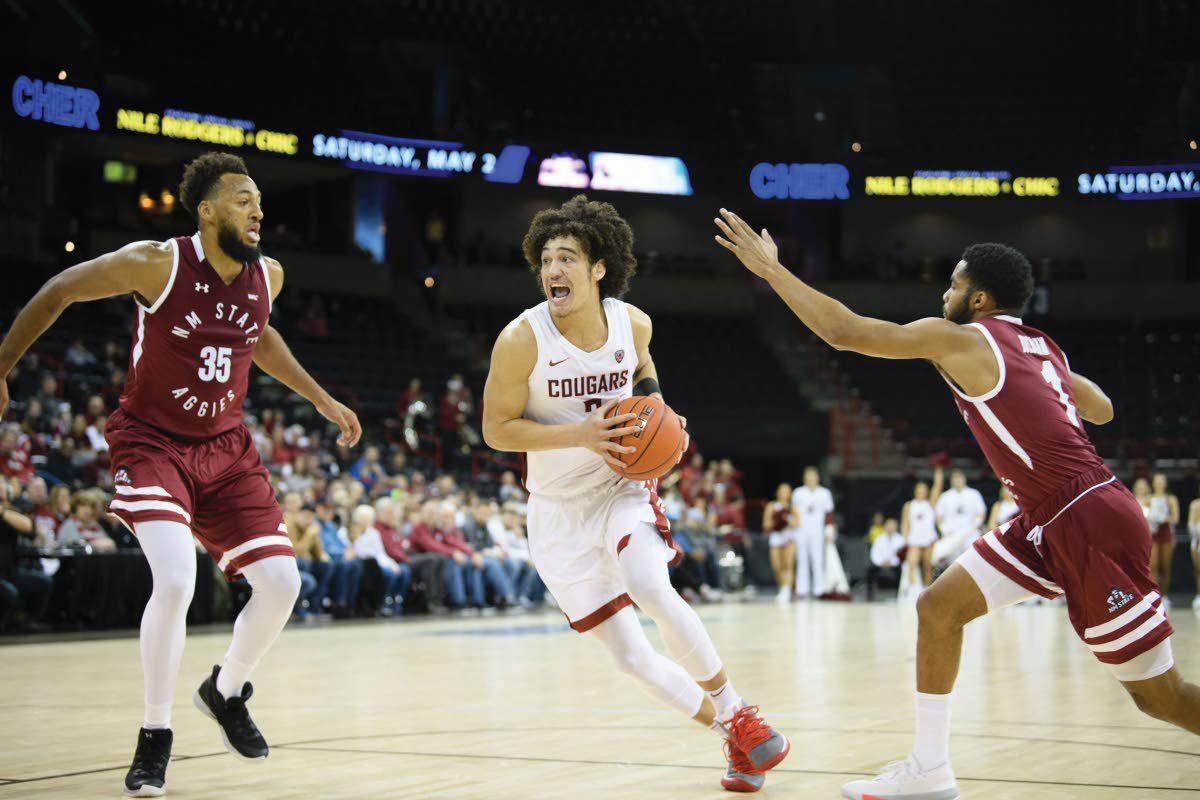 The Spokesman-Review/Tyler TjomslandWashington State forward C.J. Elleby drives against the New Mexico State defense during the second half of Saturday’s nonconference game at Spokane Arena. Elleby led the Cougars with 20 points in their 63-54 victory. 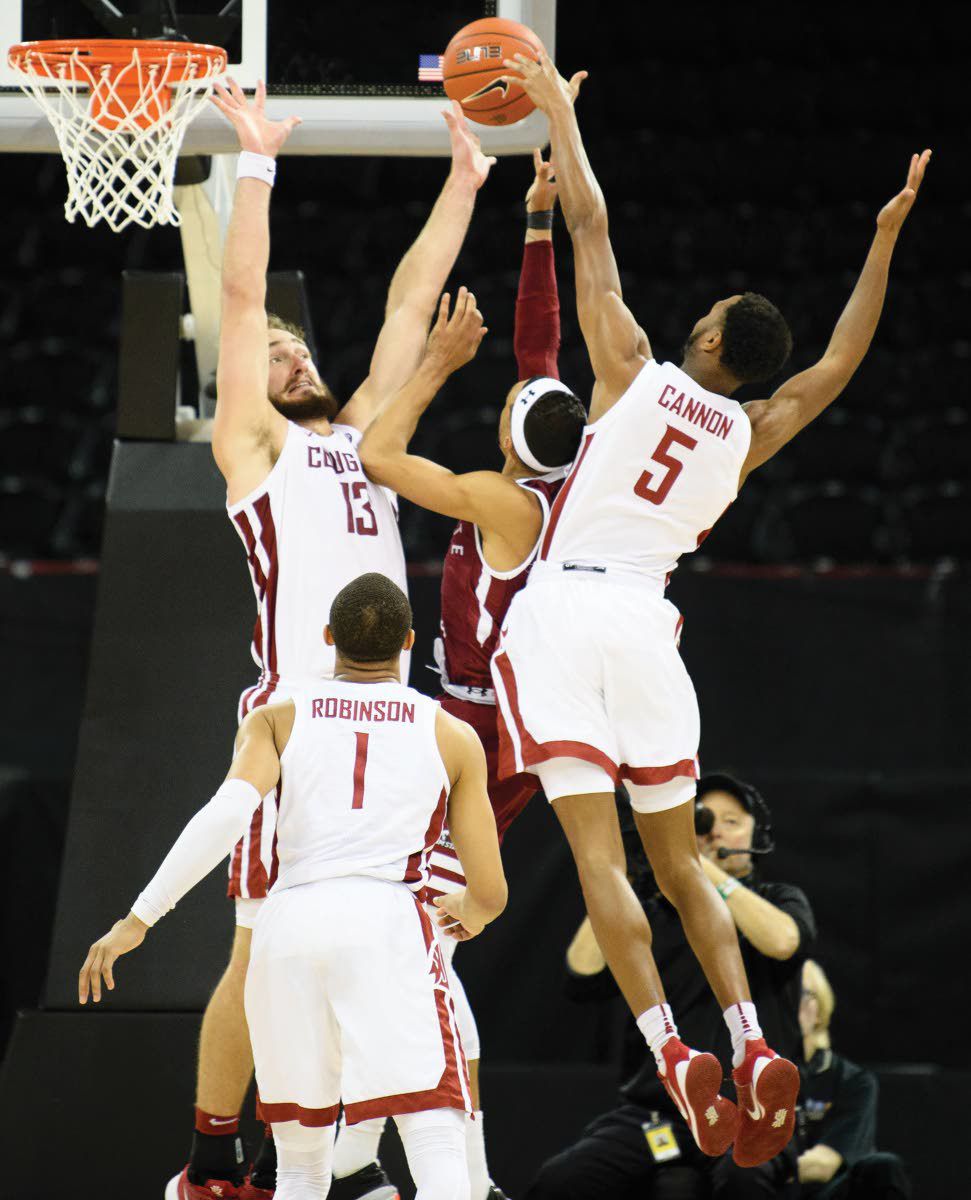 WSU’s Jeff Pollard (back left) and guard Marvin Cannon defend during the second half. 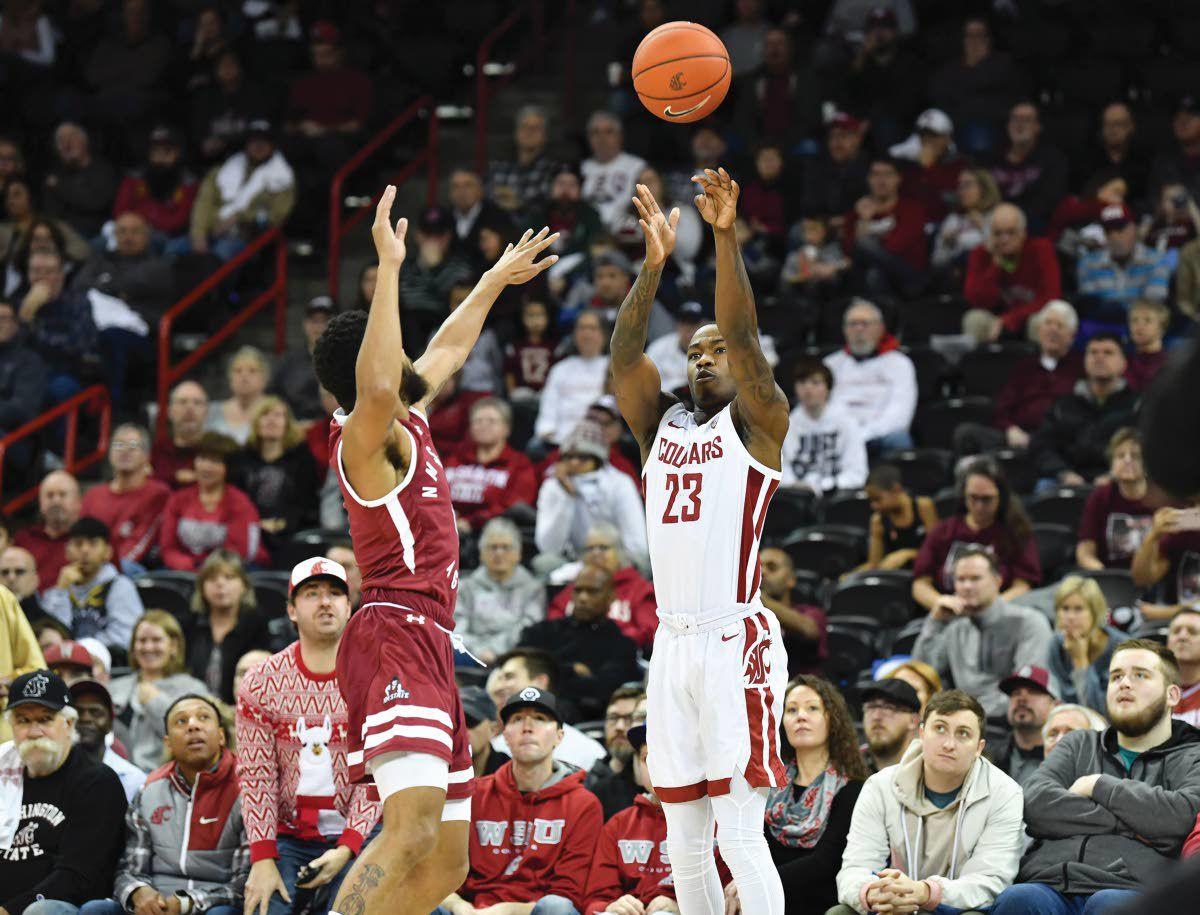 The Spokesman-Review/Tyler TjomslandWashington State forward C.J. Elleby drives against the New Mexico State defense during the second half of Saturday’s nonconference game at Spokane Arena. Elleby led the Cougars with 20 points in their 63-54 victory.

WSU’s Jeff Pollard (back left) and guard Marvin Cannon defend during the second half.

SPOKANE — The Washington State of last year wouldn’t have been so resolute.

Last year’s WSU didn’t emphasize defense as much as this one does under first-year coach Kyle Smith, who just earned himself somewhat of a signature win by way of his signature style.

Wazzu, which has transitioned into a defensive-minded group with Smith at the helm, upended the notable mid-major Aggies 63-54 on Saturday at Spokane Arena, employing to great effect their fresh methodology: lockdown defense — a quick-switching, shot-contesting, turnover-forcing shield — to stymie pesky NMSU in spurts and hold off an Aggie rally down the stretch.

“I can’t think of anyone that didn’t have a great defensive effort,” said Smith, whose team improved to 5-4. “By far our best effort (of the year).”

As it has been so far this season, the Cougs’ offense was inconsistent, steady over short periods but sluggish enough to permit NMSU runs of its own, which trimmed three separate double-digit Wazzu leads to single possessions.

Sophomore forward CJ Elleby represented WSU’s lone double-digit scorer. He poured in 20, nine of those coming on a solo spree to begin the second half and help push the Cougars’ lead to as much as 14.

Then came another of the many lulls for a team that shot 17-of-48.

“We have a tendency to kinda take quick shots in the shot clock, and when we do that, it sets the other team up for transition,” said Elleby, who also grabbed seven rebounds. “When we buckle down, we slow down our offense, we swing it side to side. Coach harps on it a lot — get it up and across the floor.”

WSU’s offense had its ebbs and flows. Its defense didn’t fluctuate. Open Aggie looks were seldom. So too was separation at the perimeter. The Cougs led for 36 minutes.

NMSU (5-5), which has made the national tournament three consecutive years and eight times since 2010, shot 34 percent from the floor and 18 percent on 3-pointers, which it prefers.

It coughed it up 17 times and couldn’t muster as much offense as Wazzu, particularly in the final three minutes, when the game was within the Aggies’ grasp.

“It wasn’t pretty — we lost our balance there a little bit — but we stumbled into it, and got tougher and made our free throws,” Smith said. “You could tell we were getting a little tight.

“I’ve done this enough. You gotta fight through it, play through it, and they did a good job of that.”

The Cougars, who had 13 giveaways, were buoyed in the last 10 minutes by senior forward Jeff Pollard, who flipped in a few clutch layins and kept NMSU off the glass to thwart a run. The Aggies cut it to 53-49 with 3:20 on the clock, but WSU kept responding.

Pollard, who described himself as doing “the dirty work,” had nine points and a career-high 10 rebounds.

“They went on a late run and it was more just refocusing the team and getting back to what had gotten us the lead,” Pollard said, “and that was defending and rebounding, which slipped when they got going.”

Elleby, who Smith said has matured from “Robin” last year to “Batman” this season, astutely chose his fights and earned chances at the free-throw line, where he went 10-of-13.

“You don’t always necessarily fight fire with fire — you just pick the spots,” said Smith, who challenged Elleby in the preseason to make his way to the foul line more. “They couldn’t keep him in front of them.”

Said Elleby, a top-five scorer in the Pac-12: “I knew I had to be a little more aggressive and get to the rim” because the Cougars’ hit-and-miss deep-ball and mid-range offense had provided Aggie retorts.

Elleby broke open an offensive standstill when he rose up in NMSU’s key and swiped a pass midway through the first half, then lobbed it deep to free-running Noah Williams, who flipped it in. Elleby then canned a 3, sparking WSU’s offense to an 11-0 run that furnished a nine-point halftime lead.

Wazzu canned seven 3s in the first half, one being the first of emerging forward Tony Miller's career. Miller supplied a lift off the bench from start to finish, scoring nine points and collecting five boards.

The Cougs, headed by the versatile play of Elleby, sprinted out to a 14-point edge four minutes into the second, but committed three consecutive turnovers soon after and let the Aggies hang around — and even cut it to 41-39 at 11:30.

But WSU’s signature defense prevailed, blanking NMSU for just more than four minutes and enabling a 12-2 burst from its offense, enough to survive another scoring deficiency at the end.

“Just take away the 3 and survive on the glass, barely,” Smith said.

For NMSU, Trevelin Queen and Jabari Rice combined for 28 points and 16 rebounds, but were overall the team’s only bright spots.

These might not exactly be the dominant Western Athletic Conference Aggies of years past, but it’s still the top win of Smith’s first season. It’s also proof these aren’t the Cougars of years past.

“That DNA is strong. They were a possession away from beating Auburn (in the tournament),” Smith said. “A lot of those guys out there were in that game last year, and that says a lot for us.”