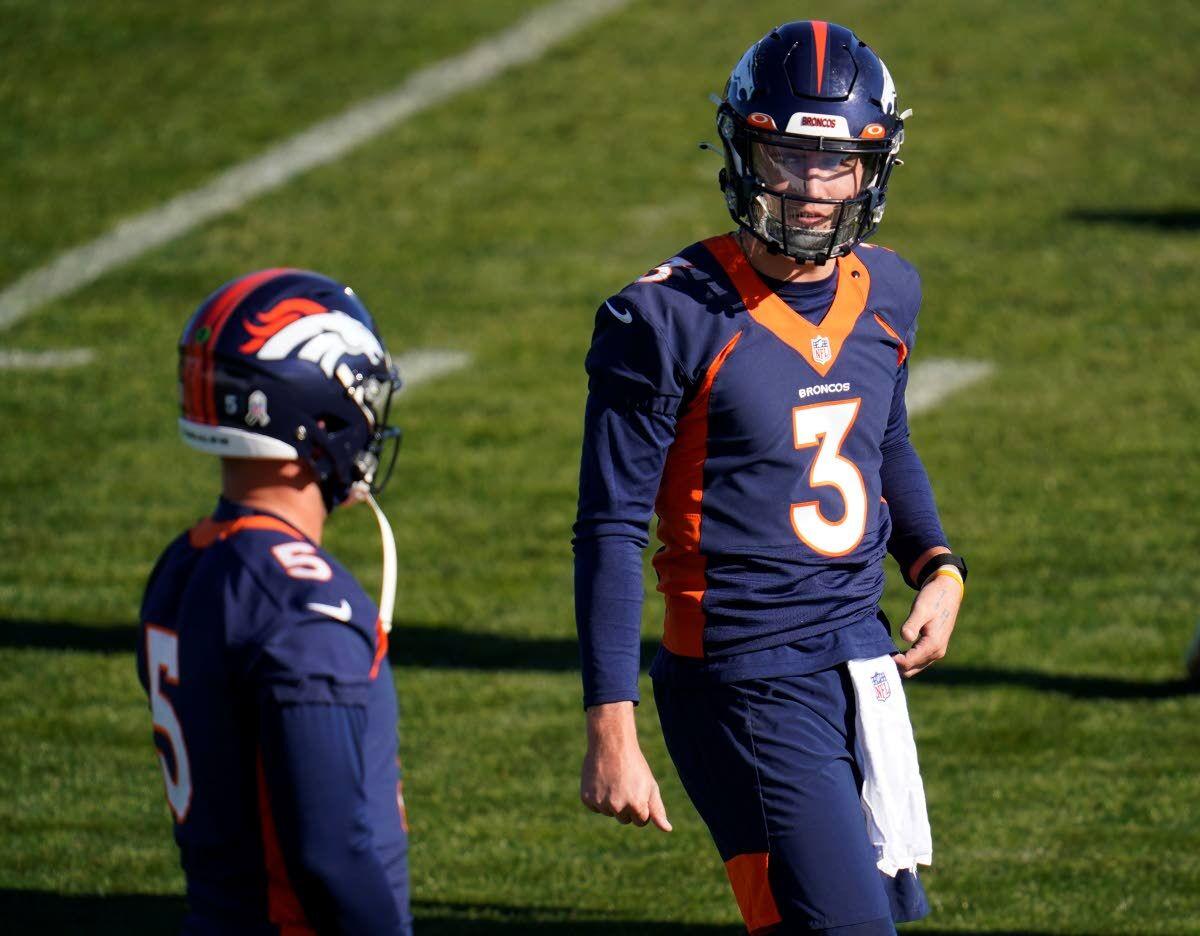 Denver QB Drew Lock (right) is one of four Bronco signal-callers who will miss today’s game against New Orleans because of COVID-19 issues. 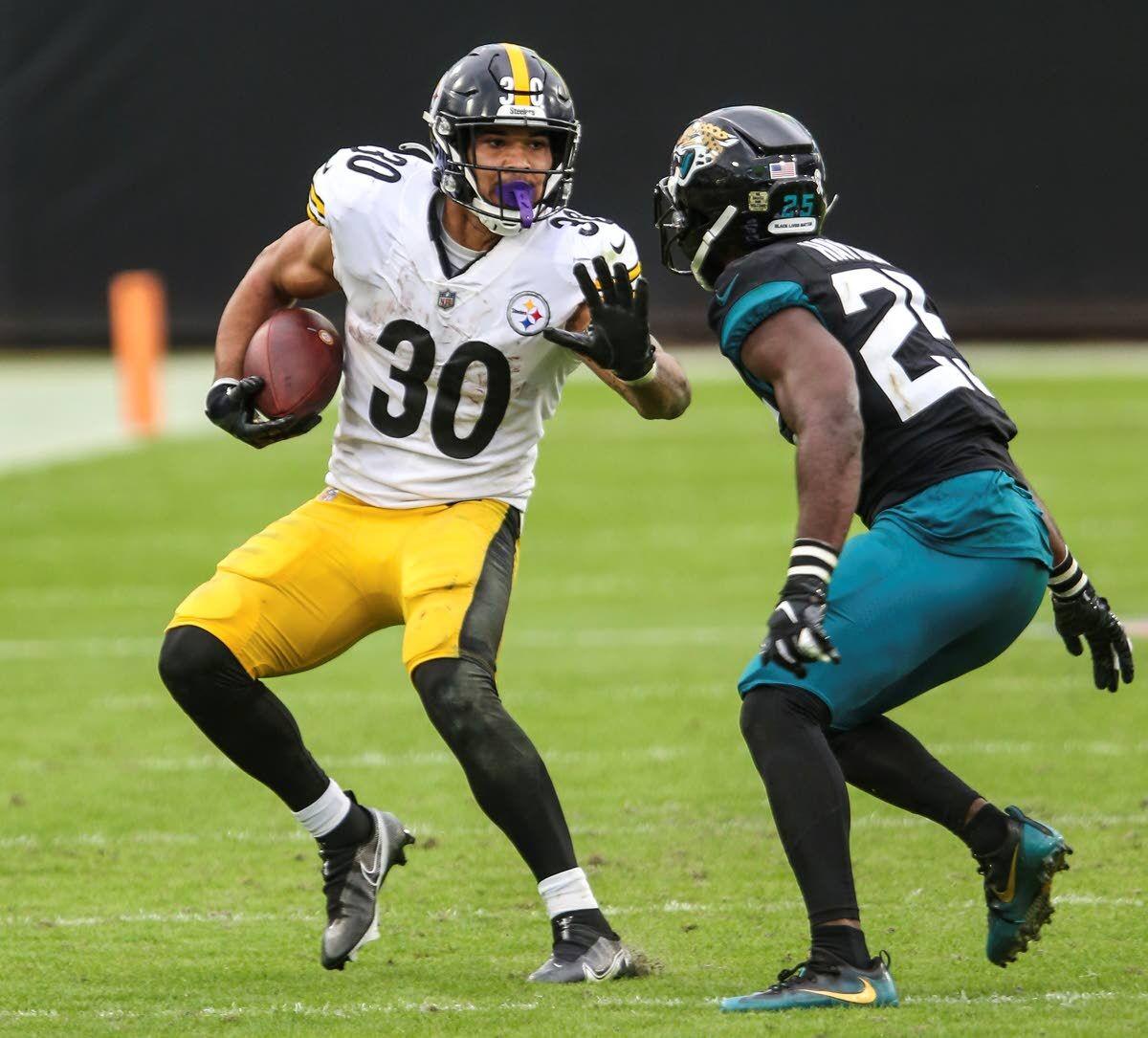 Pittsburgh running back James Conner (left) stiff-arms Jacksonville cornerback D. J. Hayden during the second half of a Nov. 22 game. Conner was placed on the COVID-19 list by the Steelers on Saturday.

Denver QB Drew Lock (right) is one of four Bronco signal-callers who will miss today’s game against New Orleans because of COVID-19 issues.

Pittsburgh running back James Conner (left) stiff-arms Jacksonville cornerback D. J. Hayden during the second half of a Nov. 22 game. Conner was placed on the COVID-19 list by the Steelers on Saturday.

The Denver Broncos have no quarterbacks. The San Francisco 49ers have no home stadium or practice facility. The Baltimore Ravens might not have enough players available for their next game, which already has been pushed back twice.

The COVID-19 pandemic caused major disruptions around the NFL on Saturday, again calling into question the league’s plan to play a full schedule after several weeks that went relatively smoothly.

Multiple people familiar with the NFL’s investigation said all four of the quarterbacks on Denver’s roster were ineligible to play Sunday against the New Orleans Saints.

Another person said the four quarterbacks apparently weren’t wearing their masks the whole time they were together as required by the league’s pandemic protocols.

The people spoke ton condition of anonymity because the NFL and the Broncos hadn’t made any announcements after Lock, Rypien and Bortles were ordered off the practice field Saturday and into isolation. The Broncos were scrambling to prepare practice squad rookie receiver Kendall Hinton and No. 3 running back Royce Freeman to play quarterback against the Saints.

The Ravens, meanwhile, put six more players on the COVID-19 list, which is for players who’ve either tested positive for the virus or had close contact with an infected person. Baltimore already had disciplined an unidentified staff member for violating COVID-19 protocols, and the outbreak — the worst on any team this season — left the Ravens with three defensive linemen and one quarterback available.

The Tennessee Titans previously had their Week 4 game against the Pittsburgh Steelers postponed because of a COVID-19 outbreak, giving both teams an unexpected bye week, and their subsequent game against Buffalo was pushed back to a Tuesday.

The Ravens’ game at rival Pittsburgh initially was scheduled for Thursday and was moved to Sunday before being postponed again for Tuesday. Some Steelers players complained about their schedule being disrupted again because of another team’s failure to contain an outbreak. But the Steelers placed starting running back James Conner on the COVID-19 list, joining three other teammates.

The active Ravens players placed on the COVID-19 list were outside linebacker Jaylon Ferguson, right tackle D.J. Fluker, defensive lineman Broderick Washington and offensive lineman Will Holden. Two others — defensive backs Khalil Dorsey and Tavon Young — were on injured reserve before also joining the list. Others on the list for Baltimore include quarterback Lamar Jackson and running backs Mark Ingram and J.K. Dobbins.

NFL commissioner Roger Goodell has warned all 32 teams that forcing changes to the schedule could lead to them being stripped of draft choices or forfeiting games. The league has thus far avoided any forfeits and was on track to complete its regular season on time.

But the league has few options should the Baltimore-Pittsburgh game need to be delayed again. The league also moved this coming Thursday’s matchup between Baltimore and Dallas to Dec. 7.

The Broncos also have been affected by outbreaks on other teams. Their game in October at New England was pushed back, first by a day and then by a week, resulting in a domino effect to their schedule and essentially costing them their bye week.

“I’m not one to complain, but @NFL y’all can’t possibly send us into a game without a QB,” tight end Noah Fant tweeted. “The most important position to a offense. We don’t even got a back up....”

Linebacker Von Miller jokingly volunteered to step in, tweeting: “Been waiting my whole life for this moment. ‘Von ELWAY’.”

The Saints placed starting left tackle Terron Armstead on their COVID-19 list, leaving him ineligible for the game in Denver.

For the 49ers, the latest complication arose from the local government trying to contain the spread of the virus in the county where they practice and play their home games. Santa Clara County banned all contact sports from holding games and practices for the next three weeks.

The ban was to take effect Monday after the 49ers returned from their game at the Los Angeles Rams. It’s set to last until Dec. 21.

The 49ers have home games scheduled for Dec. 7 against Buffalo and Dec. 13 against Washington at Levi’s Stadium in Santa Clara. The team also practices at that site.

“We are working with the NFL and our partners on operational plans and will share details as they are confirmed,” the team said in a statement.

The NFL declined to comment other than to say the league has been in contact with the 49ers. San Francisco could look to play at Oakland Coliseum — the Raiders’ old home — or possibly the Giants’ baseball stadium in San Francisco, if those cities don’t adopt similar bans.

Also, the Indianapolis Colts will be without running back Jonathan Taylor today. He is one of three Indy starters sitting out because of COVID-19 when Indianapolis hosts Tennessee for the AFC South lead.