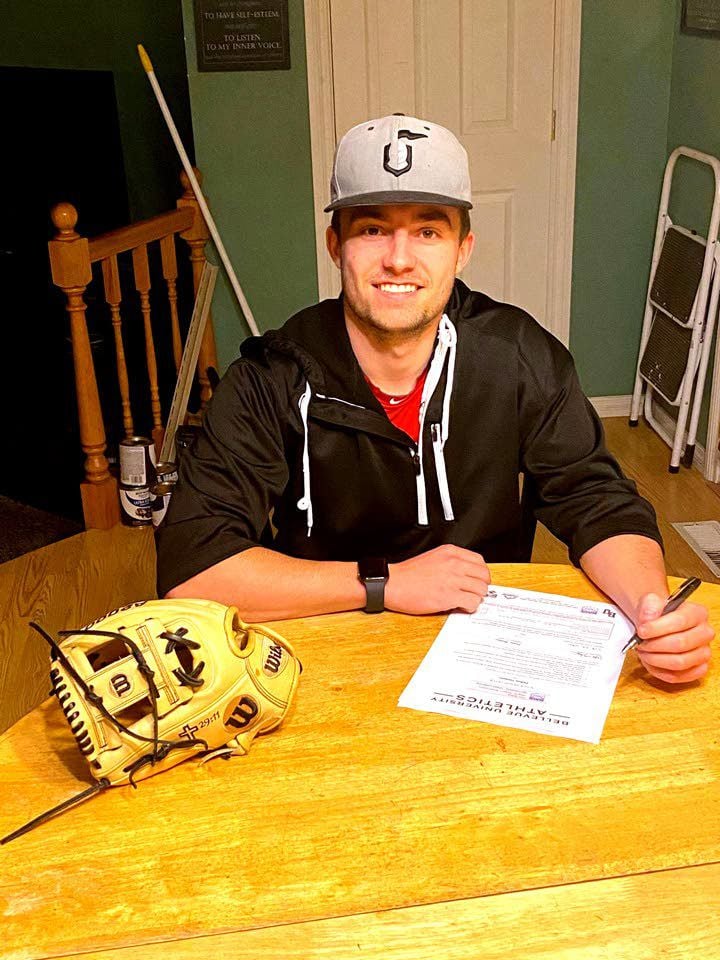 Dalton Stamper signs on the dotted line with Bellevue of Nebraska. 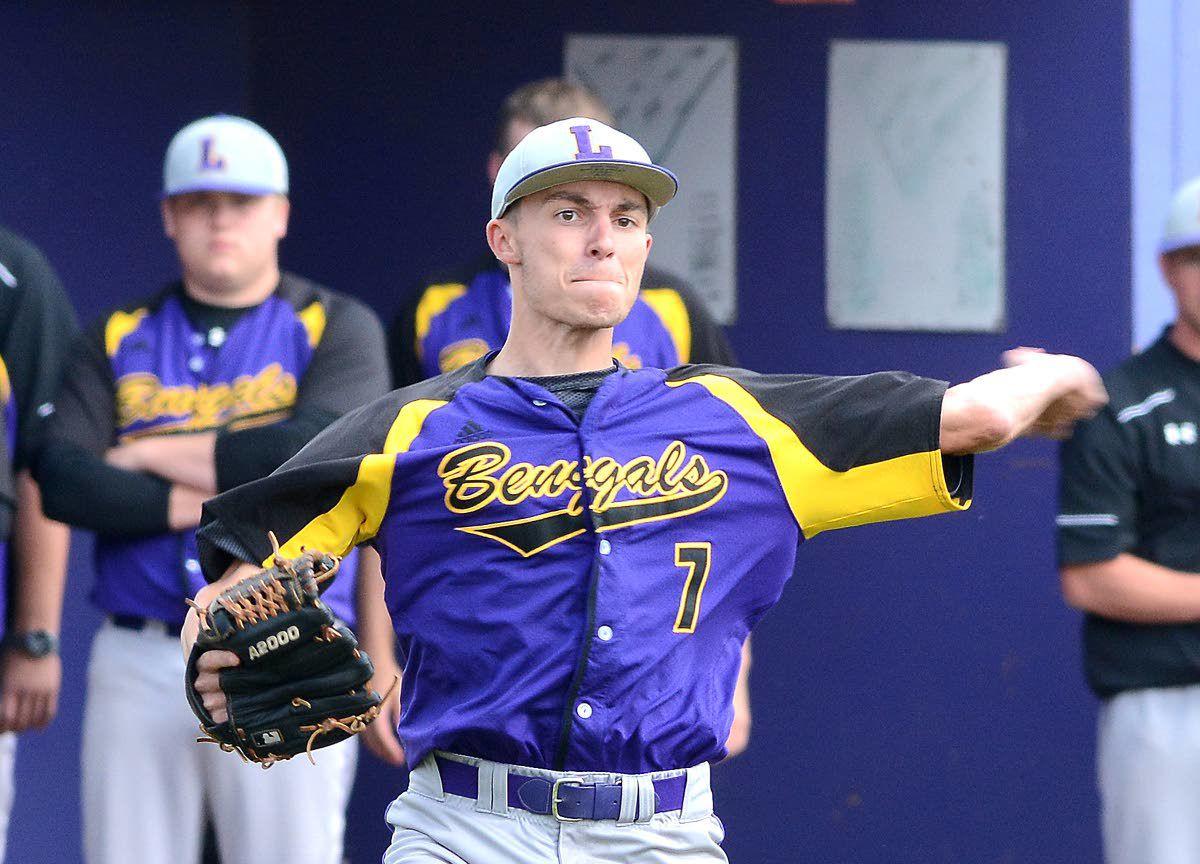 Twins pitcher Dalton Stamper prepares to rocket a pitch towards the plate during the top of the seventh inning. Stamper came in relief of ? closing out the Lumberman threats to seal the win for Lewis-Clark.

Dalton Stamper signs on the dotted line with Bellevue of Nebraska.

Twins pitcher Dalton Stamper prepares to rocket a pitch towards the plate during the top of the seventh inning. Stamper came in relief of ? closing out the Lumberman threats to seal the win for Lewis-Clark.

Dalton Stamper’s childhood dream was to show out at the NAIA World Series as a Lewis-Clark State Warrior, with his family members spectating from Harris Field’s grandstands.

“Growing up, that was always the goal,” said Stamper, a 2016 Lewiston High graduate and former LCSC redshirt in 2016-17.

Although it won’t be in navy and gray, it’s still very much possible — if not plausible — that the starting southpaw pitcher fulfills that aspiration come 2021.

In March, Stamper signed with Bellevue (Neb.), a steady NAIA contender which has qualified for the national tournament twice in the last four years.

“It’ll just be with a different team now,” he said. “That’s the main thing: Get back to the Series. And being around it so much, that’s gonna help at Bellevue. Some younger guys might not know about the atmosphere, but I’ve been there as a fan, and when I redshirted that season, the three-peat year.

The Bruins’ offer represented a payoff a few years in the making for Stamper, who’d transferred to Wenatchee Valley College in 2017, then sustained a serious injury in his sophomore season-opener there after a solid 2018 rookie campaign.

In the eighth inning of a pitching gem at Vancouver’s Clark College on March 15 of last year, Stamper felt a pop in his throwing arm.

“It was a regular fastball. It didn’t hurt until the next pitch,” he said.

Soon, he’d learned a ligament in his elbow had given out, and that he’d need Tommy John surgery if he had aims to continue his career. Stamper underwent an operation in May, and for the past 13 months, has taken time away from school to rehab and work full-time while making good use of a throwing program prescribed to him by Dr. E. Edward Khalfayan — a physician for the Seattle Mariners and Seahawks — who performed his surgery.

“I was out for so long, I figured I’d just get as strong as possible, and take this year as another redshirt year, basically,” said Stamper, who’s had jobs with Potlatch No. 1 Federal Credit Union and, currently, in Lewiston’s parks department. He’ll ship out to Nebraska in August. Stamper planned on tuning up at the Western Canadian Baseball League this summer — alongside L-C’s Tanner Simpson and Justin Hammergren, and Grangeville’s Chase Adkison — but the competition was scrapped.

“So I’ve been able to hit the gym pretty hard, put on some good weight, and my confidence is still there.”

Stamper reflected and read up on players who’ve had similar experiences, and came to the conclusion that grappling with a tough injury might pay dividends down the road.

“It’s a roller-coaster of emotions, but I’d say my confidence went up,” he said. “There’s not a fear of getting hurt. I had some injury history in high school, so there was always kinda that fear. Now, I’ve gone through it.

“My mental toughness has been tested a lot between my senior year and now. I’ve been through enough to know nothing will catch me off-guard.”

Stamper said his time away from baseball, and trips taken to watch his friends in Wenatchee, have only stoked his passion. He’ll have three full seasons to go, during which time he’ll study toward an eventual career as a math teacher (and possibly a coach).

He’s determined to carve out a key role in the rotation at Bellevue, which discovered him through a Lewiston link.

Stamper was coached at WVC by former assistant Beau Kerns — a past Warriors star pitcher — and his brother, Dustin, the Knights’ hitting coach who played collegiately for the Bruins.

“That was the connection, like, ‘Hey, we got a guy you might want to look at,’” Stamper said.

Stamper calls Beau Kerns “my mentor.” The now-Umpqua Community College assistant, who grew up a block away from Stamper, had paved the path his pupil followed.

Kerns and Stamper each hold the distinction of throwing no-hitters as Bengals — the only two to do so recently — and each spent time at WVC and L-C. Kerns had given Stamper his first pitching lesson in high school, and Stamper remembers taking inspiration from Kerns’ 2015 Series MVP run.

“I knew him around the baseball circles, and he’s a kid who’s always been incredibly motivated. That was his thing,” Kerns said.

Kerns had recruited Stamper, who at first sought to return to the Warriors more prepared and healthier after prep injuries, but readjusted his sights toward Division I ball.

“He drew me to LC State; I wanted to be like him,” Stamper said. “We became really close in Wenatchee over thoswwe two years, and we’d talked about me going back, but my focus shifted.”

Said Kerns: “The guys that are successful at the highest level, they’re good teammates, humble about their approach and obviously have good work ethic. He’s grown tremendously in so many areas as a person, and I think that’s the biggest thing. He’s a great human, and he obviously can throw a baseball too — no question.”

Stamper had interest from several schools, but that dissipated with his injury. Yet while he trained — six days per week early in his rehabilitation process — the Bruins stayed in touch.

“Coach (Duane) Monlux was very persistent,” Stamper said. “He’d always tell me, ‘We know you’ll be healthy, we know you’ll be a very good pitcher. We’re not taking the scholarship away.’

“He was looking out for my best interests, rather than filling a piece of the puzzle just to win a championship. He and the strength and conditioning coach continue to call me to see how things are going. I want to show them they made the right choice.”

The numbers hint that Stamper will be of benefit. As the No. 2 option as a freshman at WVC, he posted a 4.09 ERA, going 4-6 in 11 starts with 57 strikeouts in 48 innings pitched against 38 walks and 38 hits. He worked 7ž frames as the Knights’ ace against Clark before his injury, fanning seven. Stamper punches out about 10 batters per nine innings, and permits a .173 opponent batting average. He said his juco days taught him maturity and that he’d need to prove himself to earn time, regardless of classification.

As a prep athlete, Stamper helped guide the Bengals to second- and third-place finishes at State. He recalls taking just three losses his last two years, and registering an ERA between 1.0 and 2.0. He was an annual figure in L-C American Legion programs.

“My second year (at WVC), I started throwing with a lot more confidence, pitched with more emotion,” said Stamper, who boasts a favored slider and a low-90s heater. “My best assets pitching would be my mentality and focus now.”