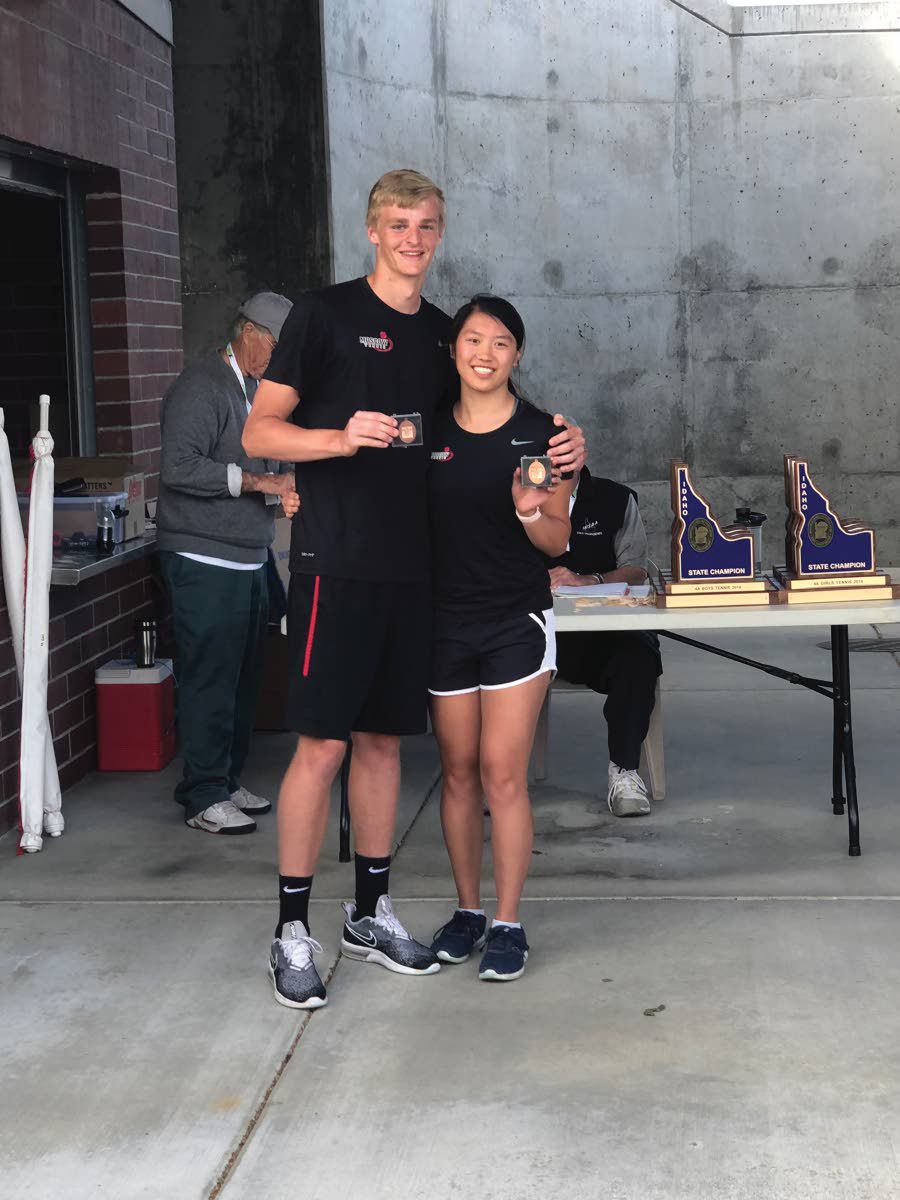 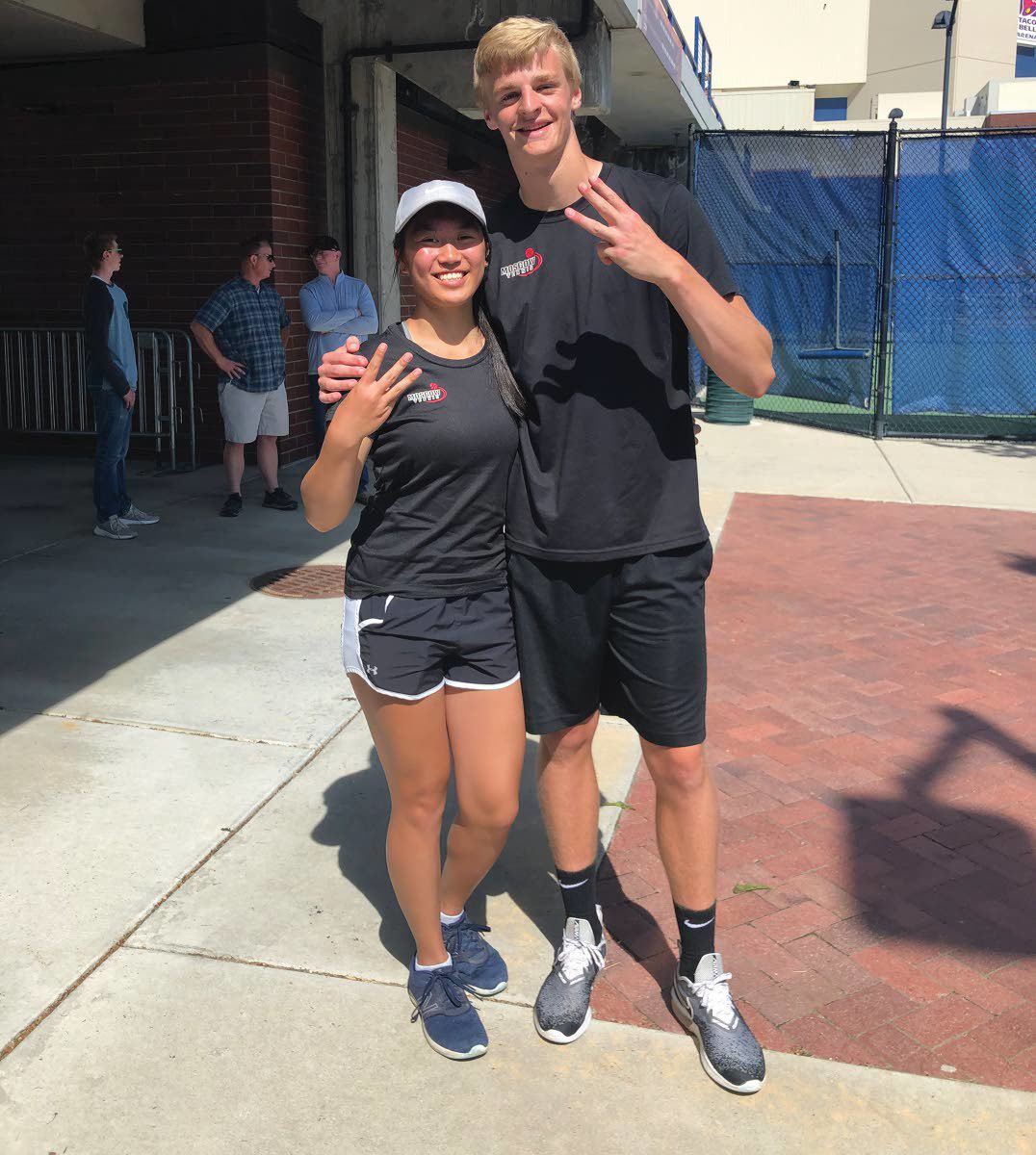 Moscow tennis players Sammy Eng and Ben Postell (right) flash the No. 3 sign on their fingers, signifying the place they finished in the 2019 Idaho High School Activities Association mixed doubles tournament in Boise.

Moscow tennis players Sammy Eng and Ben Postell (right) flash the No. 3 sign on their fingers, signifying the place they finished in the 2019 Idaho High School Activities Association mixed doubles tournament in Boise.

As a sophomore in 2018 — his first season of competitive tennis — Postell and his mixed-doubles partner, Tia Vierling, finished fourth at the Idaho Class 4A state tournament.

The next season, Postell and new partner Sammy Eng rallied through the loser’s bracket to finish third at State.

Then, Postell and his Bears boys’ basketball team powered their way to second place in an underdog run at the 2020 4A state basketball tournament in March.

With fourth, third and second in the bag, Postell had hopes of grabbing an elusive state title during his final sports campaign: his senior tennis season this spring.

“I was hoping to get first this year because we’d just gotten second place for basketball for State,” Postell said. “We were just slowly climbing the ranks.”

Alas, it was not to be. The coronavirus had other plans and Postell’s season was canceled, along with all other sports. He didn’t even have time to find a new doubles partner; Vierling and Eng were seniors during their respective seasons alongside Postell.

But two months later, Postell already is looking ahead. He’s recently been able to play recreational tennis with his family and girlfriend at the University of Idaho tennis courts, as lockdown measures start to lift. He’s also taken up fishing as a hobby during his influx of free time.

“Originally, I was pretty disappointed (about) missing my final season of tennis — I was really excited about it,” Postell said. “But I’ve come to terms with it because I’ve kind of taken a step back and looked at it. (The shutdown’s) for the safety of the public, they’re not just coming after us seniors. They’re looking after everybody, so there’s no sense in dwelling on it.

Postell — possibly known more as a football and basketball player — said he always enjoyed tennis, going back to his days growing up in Georgia, before his family moved to Moscow when he was in third grade.

Postell’s sister, Ellen, received a tennis scholarship to Georgetown (Ky.) College in 2017, which prompted Ben to give the sport a serious look during his sophomore season.

“I think I used my size and speed to my advantage and just kinda did my thing,” said Postell, a 6-foot-6 post for the basketball team and a receiver in the football program. “The form and everything came after and it just made my game that much better.”

Postell said participating in three sports helped make him a well-rounded athlete. The physicality of football helped with grabbing rebounds in basketball, and playing defense on the hoops court carried over to the back-and-forth movements on the tennis court.

“They all build on each other to just make me who I am,” Postell said.

Last season, Postell and Eng mostly rolled through the competition in racking up a 14-1 record.

Midway through the season, the duo beat a pair from Class 5A Coeur d’Alene in a match that lasted more than two hours.

“I think that match really brought my teammate Sammy and I together a lot better because we’d been through that,” Postell said. “So when we went to State, I wouldn’t say we had worse competition, but we were prepped. Like we could handle it.”

Postell and Eng faced their first loss to Middleton in the first round of the state tournament in Boise. But instead of faltering, they came back to win five consecutive matches the next day to finish third. They beat a team from Century 8-4 in the third-place match.

Unlike singles players, Postell and Eng were able to lean on each other after their initial loss.

“I remember at State we lost against Middleton and we were just exhausted after,” Postell said.

“She said, ‘We’ve got this, we’re going to come back from it,’ and we didn’t lose another match after that.”

Postell said he’ll attend Elon (N.C.) University in the fall, where he hopes to study business and sports management. The private university is close to family he has in Florida, Tennessee, Georgia and Kentucky.

In the meantime, he’s looking forward to a drive-in graduation in June.

“They’re trying to make it special for us which I really appreciate,” Postell said.