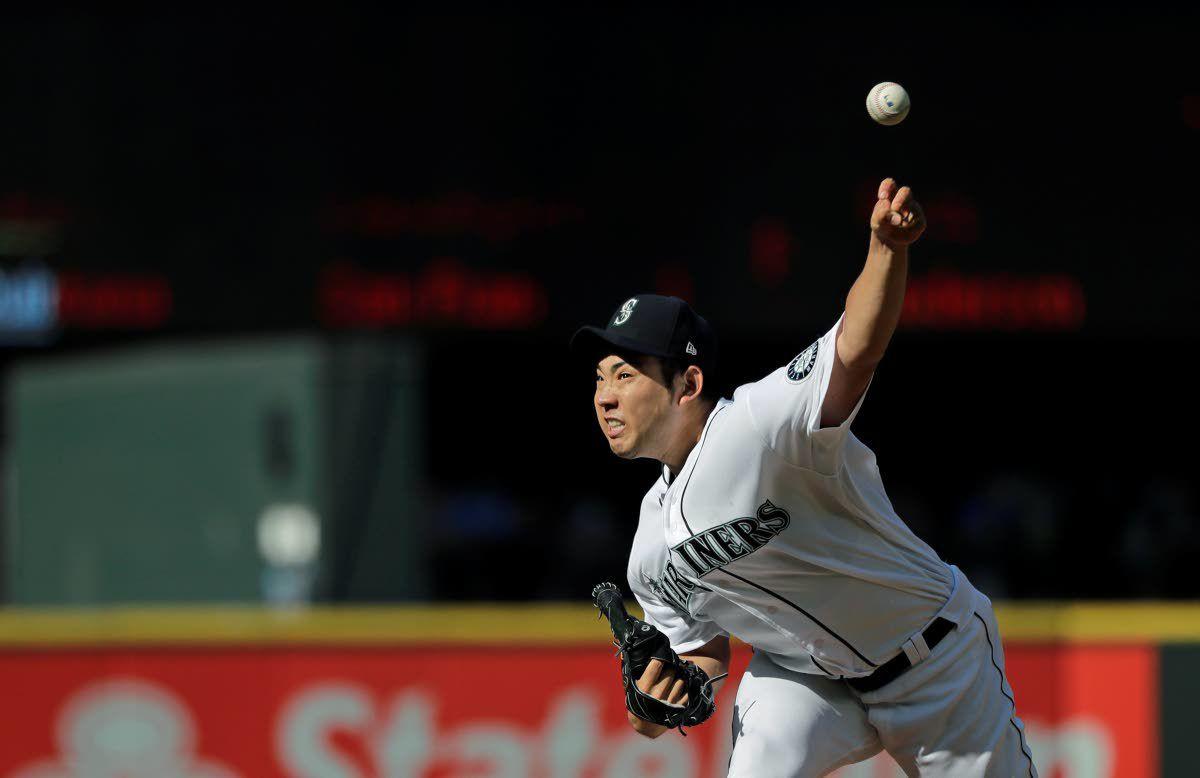 Seattle starter Yusei Kikuchi throws against the Padres in the fourth inning. 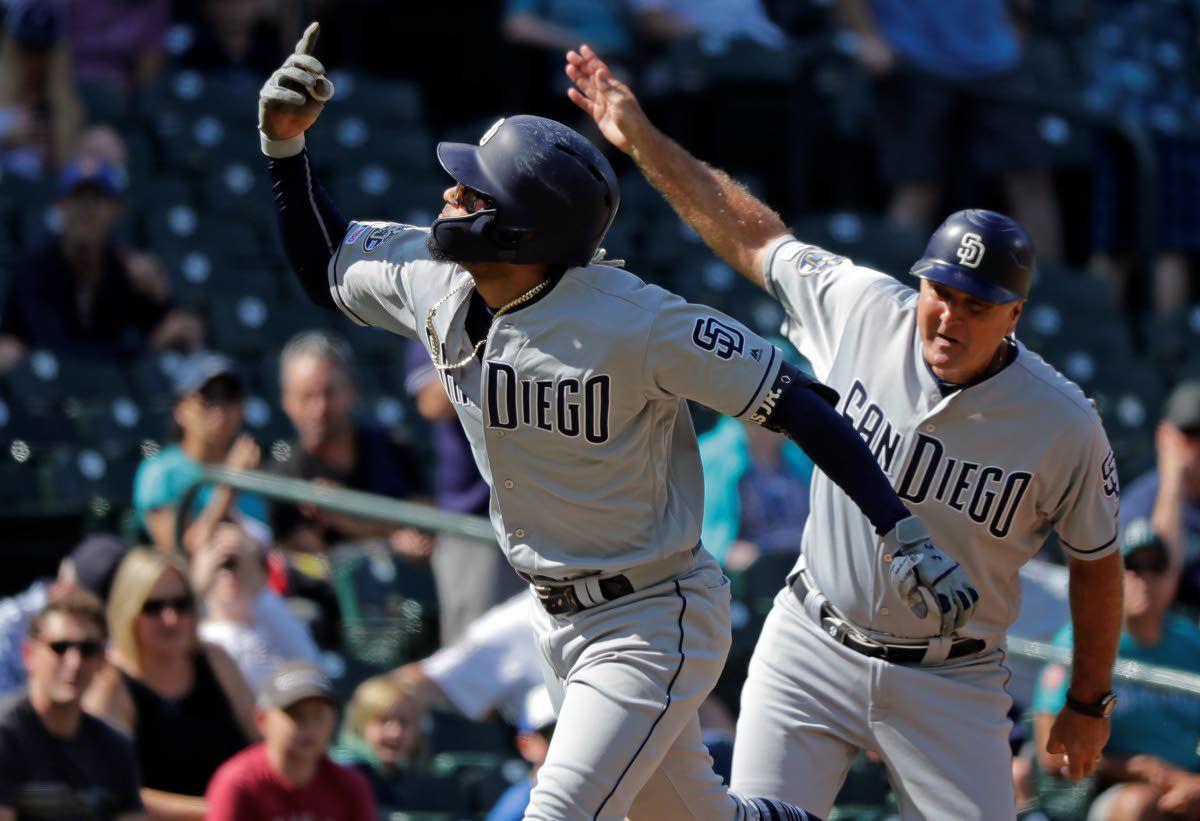 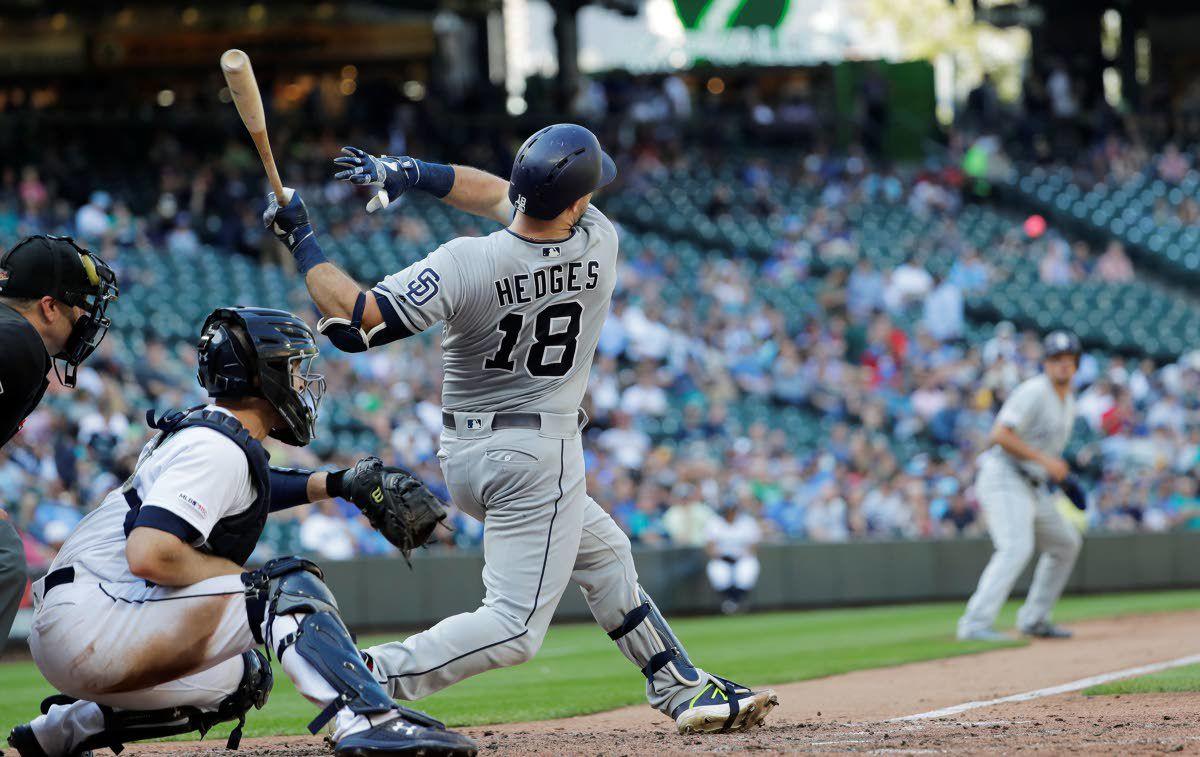 San Diego Padres' Austin Hedges follows through on a swing during the fourth inning of a baseball game against the Seattle Mariners, Wednesday, Aug. 7, 2019, in Seattle. Hedges popped out on the at-bat. (AP Photo/Ted S. Warren)

Seattle starter Yusei Kikuchi throws against the Padres in the fourth inning.

San Diego Padres' Austin Hedges follows through on a swing during the fourth inning of a baseball game against the Seattle Mariners, Wednesday, Aug. 7, 2019, in Seattle. Hedges popped out on the at-bat. (AP Photo/Ted S. Warren)

SEATTLE — The rookie season for Seattle’s Yusei Kikuchi and the transition from pitching in Japan to pitching in the majors has proved to be a challenge.

At times Kikuchi has looked dominant. At times he’s looked overwhelmed. But throughout the season, Kikuchi has worked at making the adjustments needed to eventually be successful.

Kikuchi threw five strong innings, Mallex Smith doubled leading off the eighth and scored when Daniel Vogelbach beat out a potential inning-ending double play, and the Mariners snapped a five-game losing streak with a 3-2 victory over the San Diego Padres on Wednesday.

“I thought Yusei was outstanding today in the fact he went into the game trying to make an adjustment with his mechanics and he did,” Seattle manager Scott Servais said. “And he got some results. The ball had life on it today. That was the difference.”

Kikuchi lasted only five, but the start as a whole will be viewed as an improvement. Kikuchi struck out eight, his most since striking out a season-high 10 in early May against Cleveland. Instead of watching his start devolve after Fernando Tatis Jr. homered leading off the game, the left-hander scattered just three more hits.

Kikuchi’s final inning may have been his best. After giving up a leadoff single to Tatis, Kikuchi struck out Wil Myers for the third time, threw a fastball past Manny Machado for strike three and got Eric Hosmer looking to end his outing.

Much of the success was due to an adjustment Kikuchi made after watching video of his last start. His arm motion was getting too long, throwing off the timing of his delivery and keeping his pitches from having the late movement needed.

“My rhythm and timing was off from where I was trying to throw. I tried to make sure everything was set first and then go home with it,” Kikuchi said through an interpreter.

Seattle had one victory in the previous six starts by Kikuchi, but speed was the deciding factor in the eighth.

Smith led off the inning with a sinking liner that Myers couldn’t control on a diving attempt. Smith advanced to second when the ball slipped from Myers’ hand on the throw and was credited with a double. Myers also missed a diving attempt on a liner from Tom Murphy in the second inning that went for a triple and led to Seattle’s first run.

“I think he has the capacity to make those plays, but just didn’t come up with them today,” San Diego manager Andy Green said. “They were plays that hurt us in the end, but he’s giving everything he’s got to try and make that play.”

J.P. Crawford bunted and catcher Austin Hedges appeared to throw out Smith at third base, but the call was overturned on replay to put runners at the corners with no outs. Andres Munoz (0-1) struck out Domingo Santana before Vogelbach hit a slow chopper to Tatis. The shortstop had no play at home plate to get Smith and instead tried to turn a double play. Vogelbach shuffled down the line and beat the relay throw, allowing the go-ahead run to score.

Seattle OF Mitch Haniger continues to ramp up his baseball activity in hopes of going out on a rehab assignment next week when the Mariners go on the road. Haniger estimated he’s about 85 percent in his recovery from a ruptured testicle suffered in early June. Haniger said hitting and throwing haven’t been a problem, but running at full speed has been his limitation so far. The Mariners are hoping with a few more days of full pregame activity he’ll be cleared to start playing and eventually returning to the club.

“It’s a lot better this time. I think everything is fully healed and now it’s just about building up and getting going,” Haniger said.