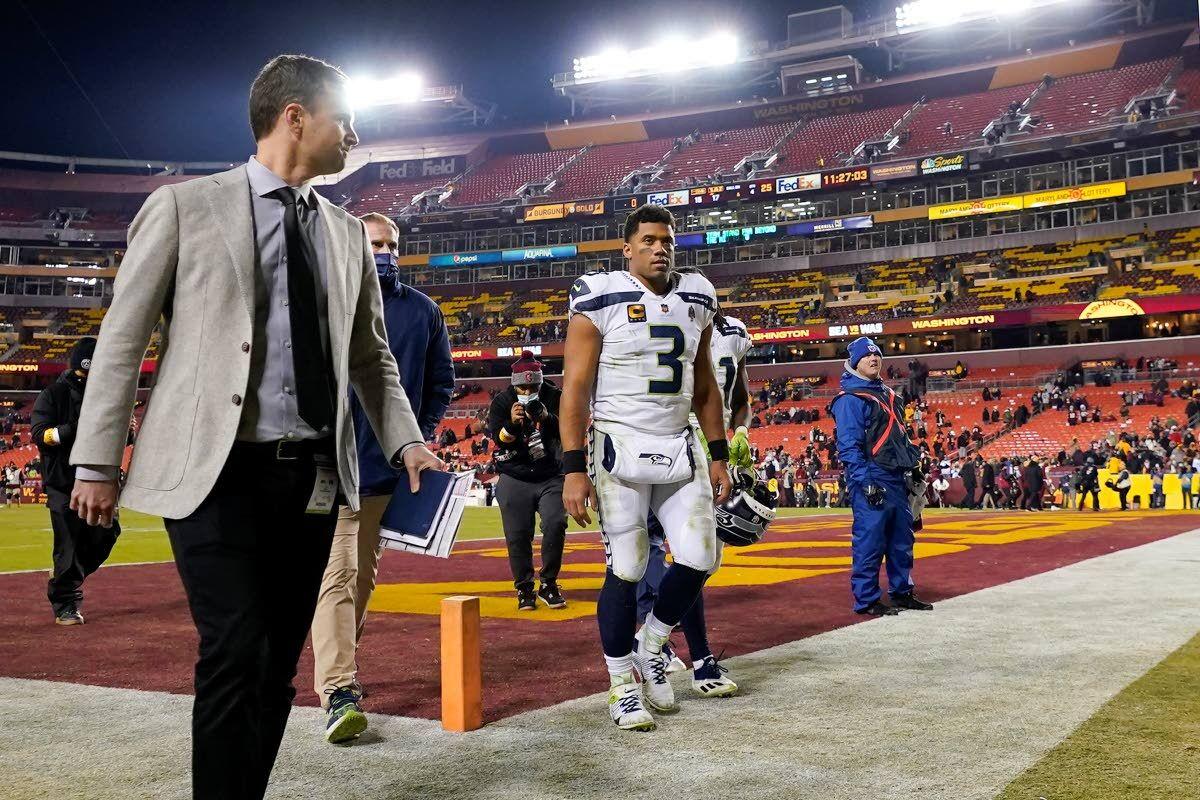 Seattle quarterback Russell Wilson walks off the field at the end of Monday’s game against Washington in Landover, Md. 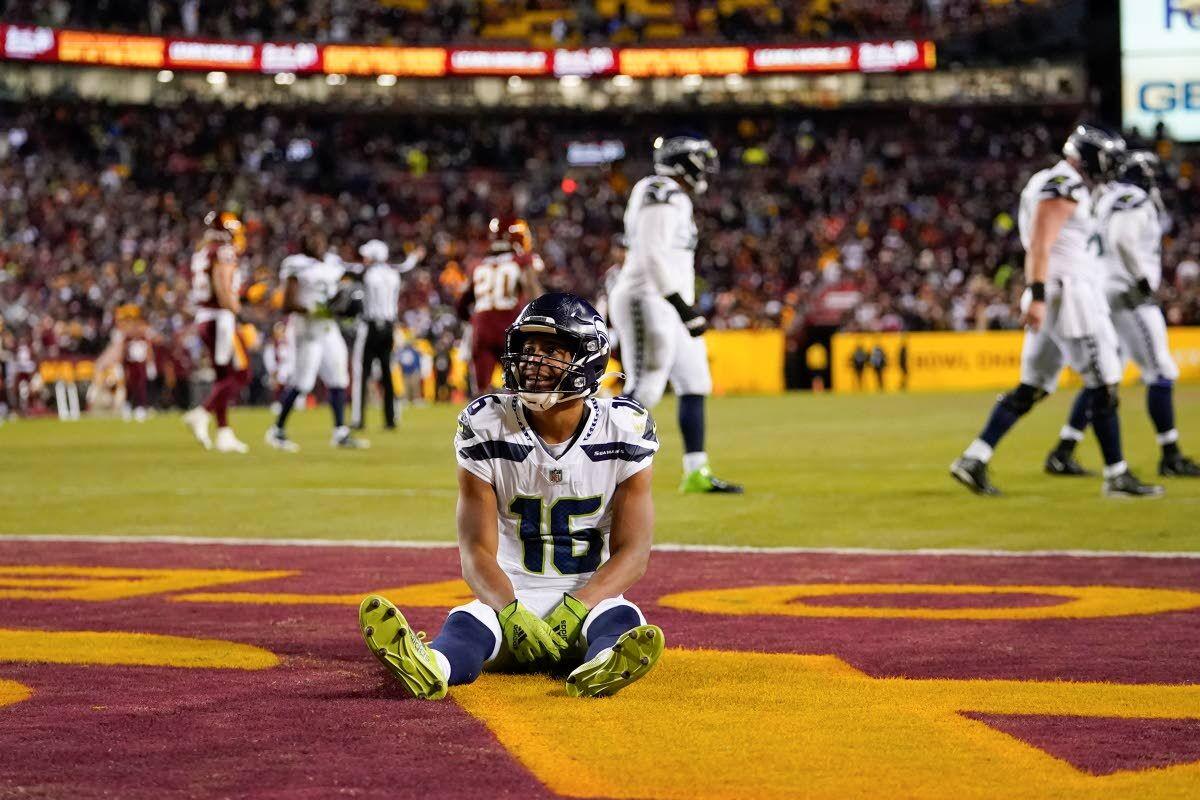 Seattle Seahawks wide receiver Tyler Lockett (16) sits in the end zone after Washington Football Team cornerback Kendall Fuller (29) made an interception against the Seahawks near the end of the second half of an NFL football game, Monday, Nov. 29, 2021, in Landover, Md. Washington won 17-15. (AP Photo/Julio Cortez) 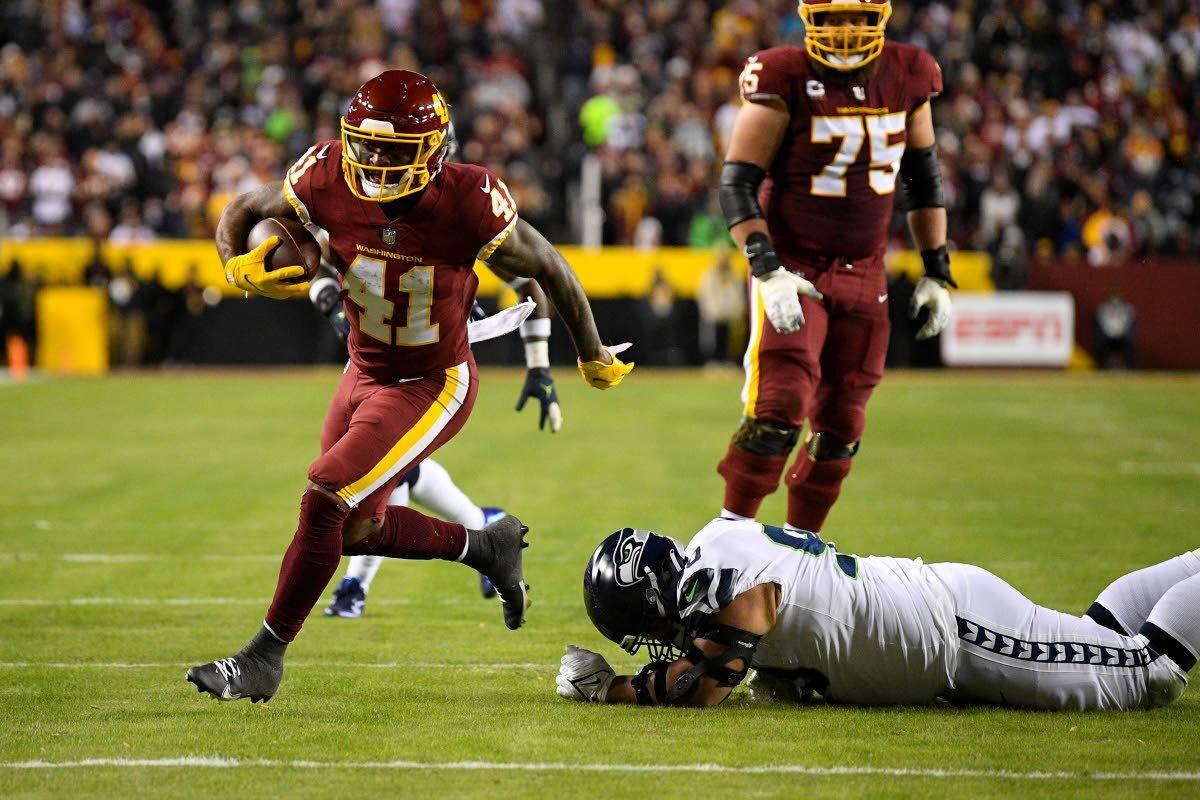 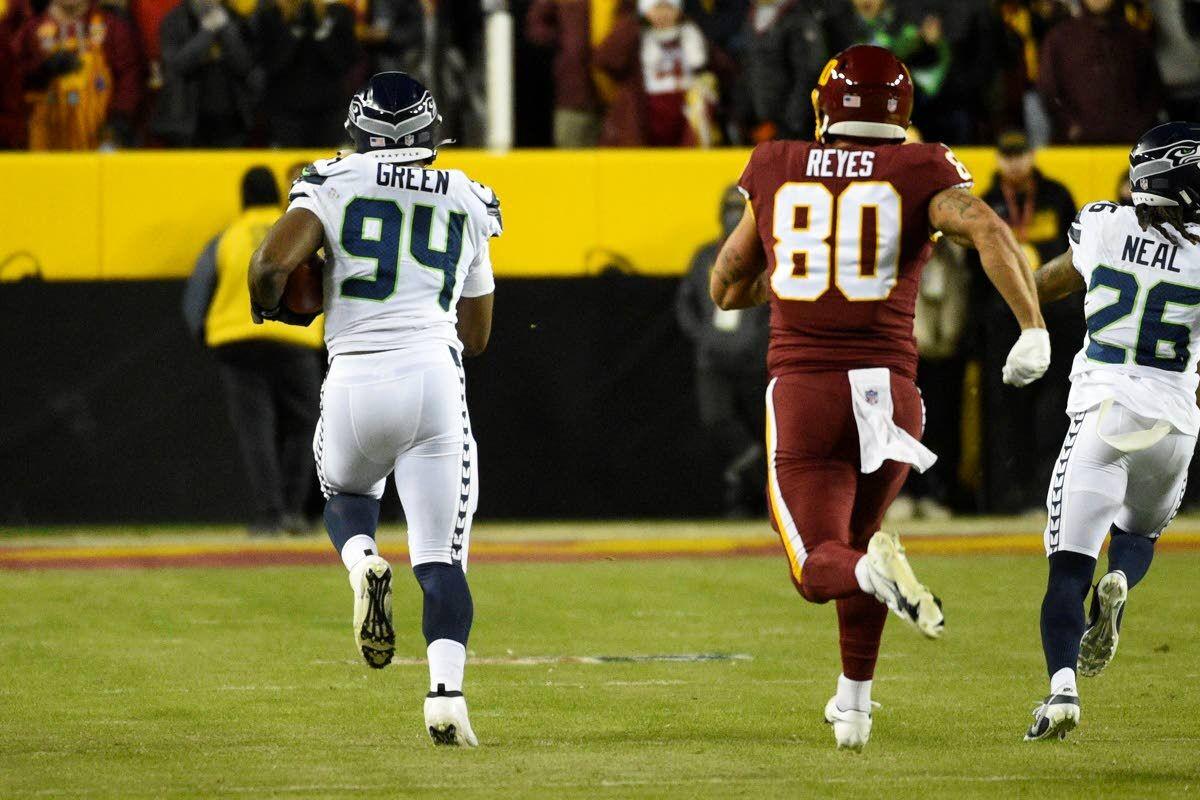 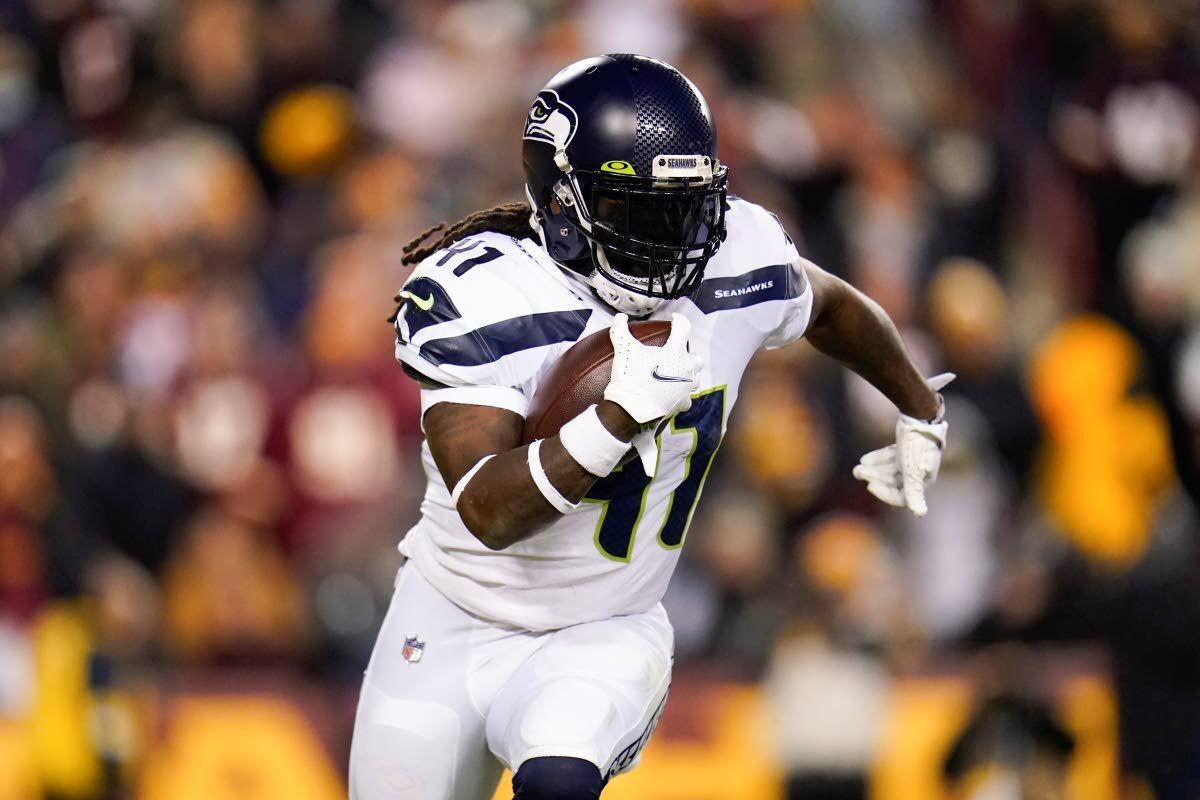 Seattle Seahawks running back Alex Collins runs with the ball during the second half of an NFL football game between the Washington Football Team and the Seattle Seahawks, Monday, Nov. 29, 2021, in Landover, Md. Washington won 17-15. (AP Photo/Julio Cortez)

Seattle quarterback Russell Wilson walks off the field at the end of Monday’s game against Washington in Landover, Md.

Seattle Seahawks wide receiver Tyler Lockett (16) sits in the end zone after Washington Football Team cornerback Kendall Fuller (29) made an interception against the Seahawks near the end of the second half of an NFL football game, Monday, Nov. 29, 2021, in Landover, Md. Washington won 17-15. (AP Photo/Julio Cortez)

Seattle Seahawks running back Alex Collins runs with the ball during the second half of an NFL football game between the Washington Football Team and the Seattle Seahawks, Monday, Nov. 29, 2021, in Landover, Md. Washington won 17-15. (AP Photo/Julio Cortez)

RENTON, Wash. — Since the arrival of Russell Wilson and Bobby Wagner in 2012, the Seattle Seahawks have played one game in the previous nine seasons that was deemed meaningless.

It looks as if it’s about to be a long six weeks of meaningless football in the Pacific Northwest after Seattle’s 17-15 loss to Washington that likely served as the final blow to any hopes the Seahawks had of making a late run in what’s been a miserable season to date.

“It’s frustrating. We’re frustrated. Obviously, this is not how we wanted things to go,” Wagner said. “We’ve just got to figure out how to get some wins.”

In every previous season there always was something at stake for the Seahawks each week regarding the postseason, whether it was seeding, getting into the playoffs or just keeping momentum going into January and beyond.

And even in the 2017 season where Seattle missed the playoffs and played a meaningless Week 17 game, the Seahawks were in contention until late December and still finished with a winning record.

While the loss to Washington doesn’t eliminate Seattle from postseason contention, it might as well have been an elimination result. The Seahawks are one of five teams in the league with three wins or less, their offense is a broken shell of what it used to be and because of that their defense is exhausted from never getting an extended break on the sideline.

Wilson, the franchise quarterback, looks lost. He continues to say his surgically repaired finger is not a problem. But if the finger is fine, what explains his lack of accuracy, along with some bad decisions and missed open receivers?

“I can be better, so that’s what we’ll do,” Wilson said. “Like I said, if anybody believes I believe. For 10 years we’ve believed. It’s been tough, it’s been challenging. I know we haven’t faced this moment, but the moment will pass and we’ll come through on the other end of it.”

The endurance of Seattle’s defense should be recognized even if the numbers and results haven’t been an accurate indication of how they’ve played. The Seahawks have held six consecutive opponents to 23 points or less and have been doing so while being on the field longer than any other defensive group in the NFL, by a wide margin.

The Seahawks defense has spent more than 35 minutes on the field in seven of 11 games, and in the past three games has spent 39 minutes, 9 seconds on the field at Green Bay, 40:22 at home to Arizona and 41:40 on Monday at Washington.

There are plenty of options, but let’s go with the run game that remains absent. Seattle had just 12 run plays and 10 by running backs. Coach Pete Carroll continues to preach the importance of the run game but it’s not showing up statistically.

Seattle has failed to reach 20 rush attempts in three straight games and five times total this season — all losses.

Rasheem Green showed some unexpected speed when he returned a blocked extra point for two points in the first half Monday. According to the NFL’s Next Gen Stats, Green reached 18.41 mph during his return and traveled 94 yards to the end zone. That was the fastest max speed reached by a defensive lineman carrying the ball since Jadeveon Clowney in Week 4 of 2019 when he hit 18.59 mph.

Seattle would have liked a little more impact from Green in the pass rush where the Seahawks had only one sack and two quarterback hits.

Did DK Metcalf do something to irritate Wilson? The Seahawks most dynamic receiver mostly has been absent from the pass game in recent weeks. Metcalf didn’t get his first target Monday until the third quarter and he finished with one catch for 13 yards.

Most troubling, Wilson missed Metcalf running open in the back corner of the end zone on the failed 2-point conversion attempt that could have forced overtime.

In the three games since Wilson returned, Metcalf has a total of eight receptions and no touchdowns.

“You gotta get him the football, gotta find ways to do it, gotta move him around some more maybe,” Wilson said. “We’re gonna study it and see what we can do.”

Seattle appeared to get out of the game with no new injuries of significance. The Seahawks sounded hopeful that left guard Damien Lewis (elbow) and running back Rashaad Penny (hamstring) might have a chance of returning this week against San Francisco.

31 — Since returning from finger surgery in Week 10 at Green Bay, Wilson has led 31 offensive drives. The Seahawks have three touchdowns in those 31 offensive possessions.

The Seahawks now are in the unusual role of spoilers for the NFC playoff race beginning this week against San Francisco. Seattle has just three games remaining against possible playoff teams and all of them are division foes — San Francisco, at Los Angeles in Week 15 and at Arizona in Week 18.