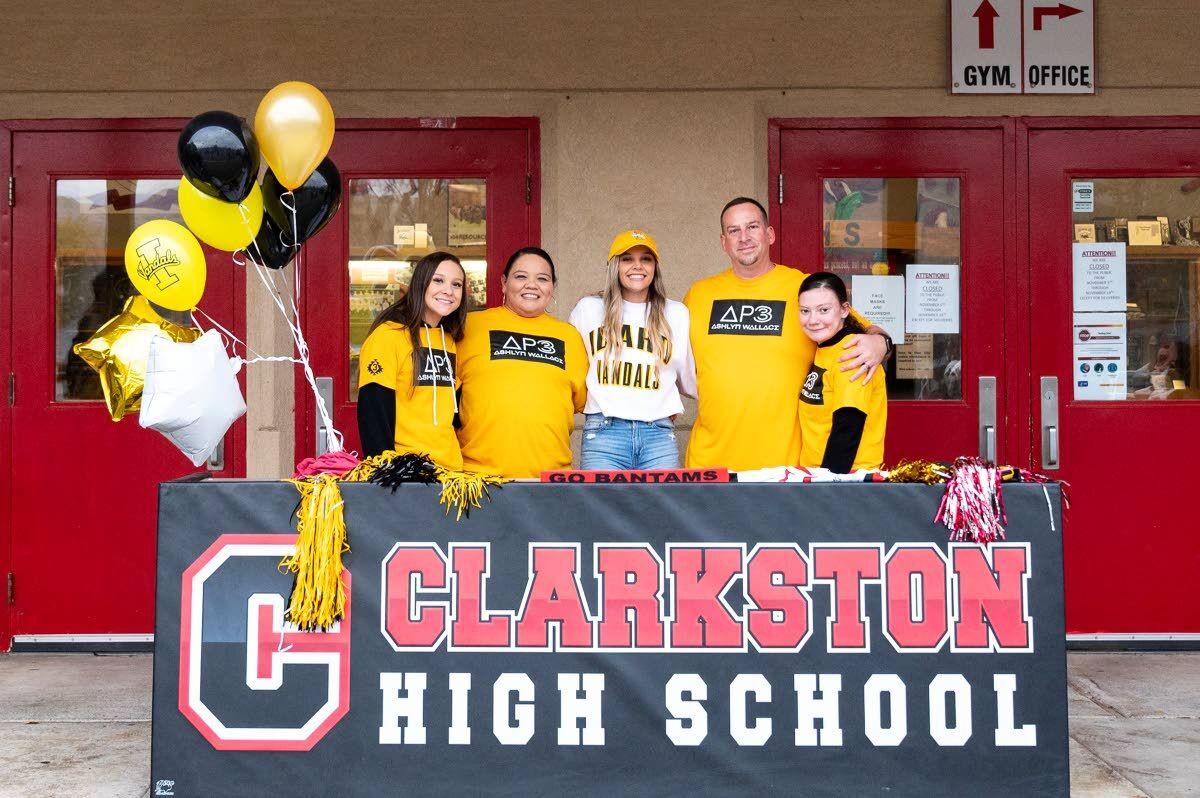 Clarkston High School senior Ashlyn Wallace (center) poses for a portrait with her parents Starr (center left) and Rory (center right) along with sisters Taylor (right) and Kendall after she signed a national letter of intent Monday to play basketball at the University of Idaho. 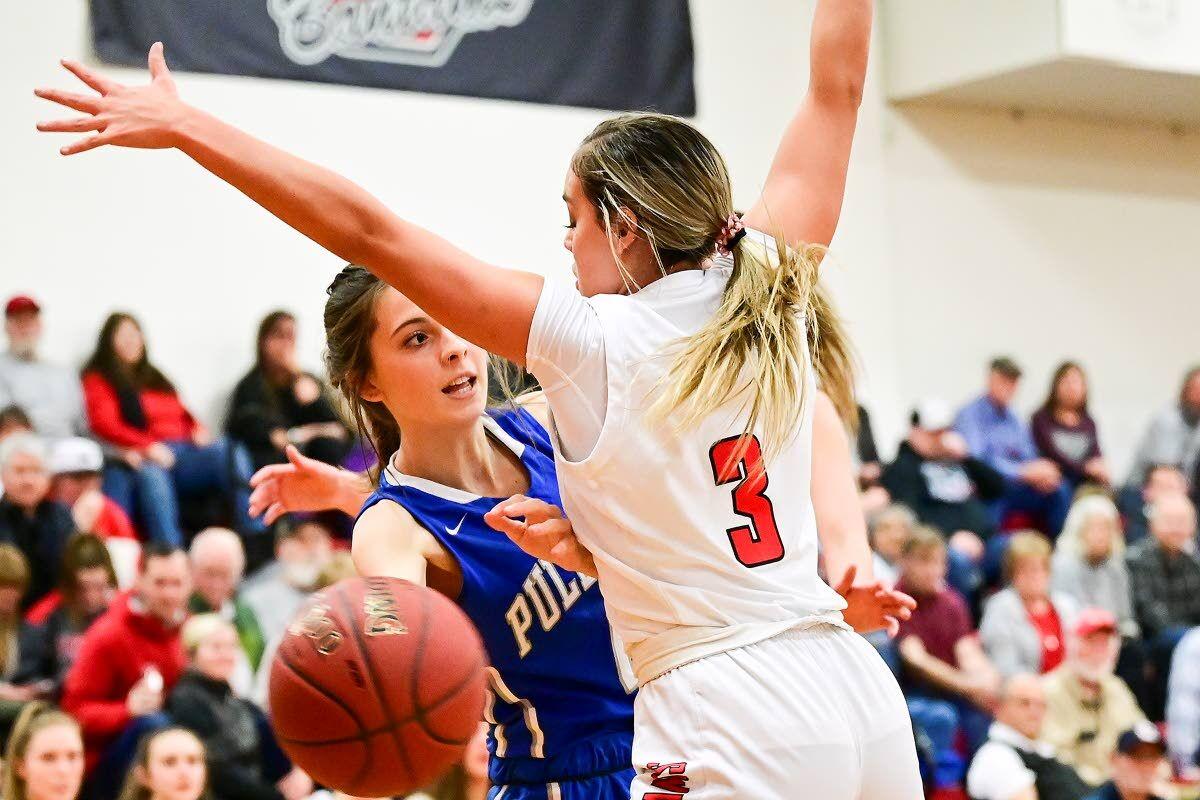 Clarkston’s Ashlyn Wallace (right) started going to Idaho’s camps when she was around 9 years old. Now, she’ll be playing for the Vandals after signing a national letter of intent Monday.

Clarkston High School senior Ashlyn Wallace (center) poses for a portrait with her parents Starr (center left) and Rory (center right) along with sisters Taylor (right) and Kendall after she signed a national letter of intent Monday to play basketball at the University of Idaho.

Clarkston’s Ashlyn Wallace (right) started going to Idaho’s camps when she was around 9 years old. Now, she’ll be playing for the Vandals after signing a national letter of intent Monday.

Ashlyn Wallace is a basketball lifer, a nonstop hooper who’ll carve out time to play at any opening.

Members of her inner circle could attest. They find themselves on the receiving end of text messages multiple times a week.

“My friends get annoyed sometimes,” the Clarkston High School senior and Lapwai product said, laughing. “I’m always texting them: ‘I need a rebounder.’ But I’ve got great family and friends. They’re used to me asking too.”

At this stage, the sport has become close to full-time for Wallace, a two-time Adidas All-American and Associated Press All-Region court maestro at point guard.

The Bantam record-breaker will be continuing her vocation, and soon be living out a dream: playing as much basketball as she can get.

“It clicked from the very beginning,” said Wallace, one of Washington’s top overall prospects and a two-time Great Northern League MVP, whose other Division I suitors included Washington State, Butler and Eastern Washington.

“(Newlee) kept his eye on me throughout the years, and we always had a little connection. He’s super cool. The coaching staff is great. It was a perfect fit.”

It’s also fitting that one of Wallace’s earlier memories in the sport came about half her lifetime ago, when she first met the 13th-year Vandal boss at one of his offseason prep camps in Moscow.

“She’s been going there for so long, it’s basically like family,” Bantams coach Debbie Sobotta said.

The Vandals, having been along for much of the ride, should know exactly what kind of long-developing gem they’ve landed.

Wallace is a 5-foot-6, left-handed shooter who commands a game’s tempo and doesn’t get rattled or sped up by opponents. She boasts an impressively quick and fluid shot release, and one of the smoothest long-range touches in the Northwest.

She can attack the basket with the best of them, rarely misses a free throw, possesses next-level ball-handling skills and sharp vision, and is one of the region’s peskiest defenders.

“She has so much in her repertoire,” Sobotta said. “She’s spent so, so much time honing her skills throughout offseasons, and during the season, she always works extra.

“Everyone knows she’s legit from the 3-point line, and I’d say she’s really developed that midrange game. But probably one of the biggest things is how she reads situations. ... She can take it to a whole different realm, and you stop coaching and just watch and enjoy.”

Wallace averaged approximates of 25 points, four rebounds, four assists and four steals per game last season. She leads Clarkston’s program all-time in 3-pointers (192) and assists (250), and is about 200 points shy of the scoring mark, at 1,547.

No Bantam has drained more 3s or accumulated more points in a season than Wallace. In total, she’s claimed seven school records.

“I think you can always get better at anything,” Wallace said, “so I really work on everything.”

In club ball with the prestigious Northwest Blazers — playing mostly against other D-I recruits — she has fared similarly well, earning All-American nods in 2018 and 2019.

She began to emerge as a collegiate recruit during her junior high years. In a 2017 Adidas Gauntlet tournament in Atlanta, the then-13-year-old Wallace helped the shorthanded and youthful Blazers to the 15U national title. Last year, her club team finished runner-up.

“She’s played around the nation with all-stars all around her, and she always fits in nicely,” Sobotta said. “She’ll be able to adapt (at the D-I level) and figure out her niche.”

“We’ve played against commits from all over,” Wallace added. “It’s been cool to see how you match up.”

Newlee, who called Wallace “one of the top point guards in the country,” should be able to plug her into his schemes relatively early, considering his team’s affinity for quick shots from distance and a fast-paced approach that jibes well with her hustle and play-creation.

“All of her experience playing at the highest level will be invaluable to her when she starts her Vandal career,” Newlee said. “I have wanted Ash to be a Vandal since she started coming to my camp at the age of 9. I knew she was going to be special then.”

Wallace, being a dual-citizen of hoops hotbeds, has basketball in her genes. By elementary school, she began forming the coordination, vision and passion to excel in the game down the road.

Sobotta, a former neighbor of the Wallaces in Lapwai and close friend of the family, picked up on it about 12 years ago.

“She just had that knack for awareness. Whether it was a soccer field or basketball court, it’s that natural instinct of knowing what to do,” Sobotta said.

Wallace spent many of her days as a youth at the Pi-Nee-Waus Community Center courts in Lapwai, sometimes honing her skills for five hours per night.

“I was playing one-on-one with those girls in high school when I was a little kid,” she said.

Her parents, Rory and Starr, were past basketball standouts, and her aunt, Natahnee Spencer, played at Lewis-Clark State. Her grandfather, Shawn Spencer, flourished as a longtime Lapwai coach.

“She’s just grown up in a gym with her family,” Sobotta said. “She always finds a way to play, even during her off-time.”

Wallace was able to squeeze in a few lower-tier Adidas tournaments with the Blazers this summer — the larger of them in Arizona and Indianapolis.

Amid the uncertainty of the coronavirus pandemic, she’s clinging to hopes of playing out her final year alongside younger sister Kendall, one of many who constantly accompanies her to courts.

The Wallace family recently took a vacation to Mexico. Upon returning, instead of unwinding, Ashlyn opted to shoot some hoops “before I did anything else.”

So, in search of a rebounder, she grabbed her phone.

“It’s nonstop. There’s never a day off, that’s for sure,” the new Vandal point guard said.

Idaho rounded out its women’s hoops recruiting class with the addition of a guard and a post.

Jordan Allred, a 5-foot-9 guard from Orinda, Calif., averaged 16.2 points per game last season for Miramonte High School. She already is a member of the 1,000-point club heading into her senior season.

Madison Rubino, a 6-foot post from Snohomish, Wash., is a senior at Glacier Peak High School. Last season, she recorded the game-winning block to secure a third-place trophy at State.