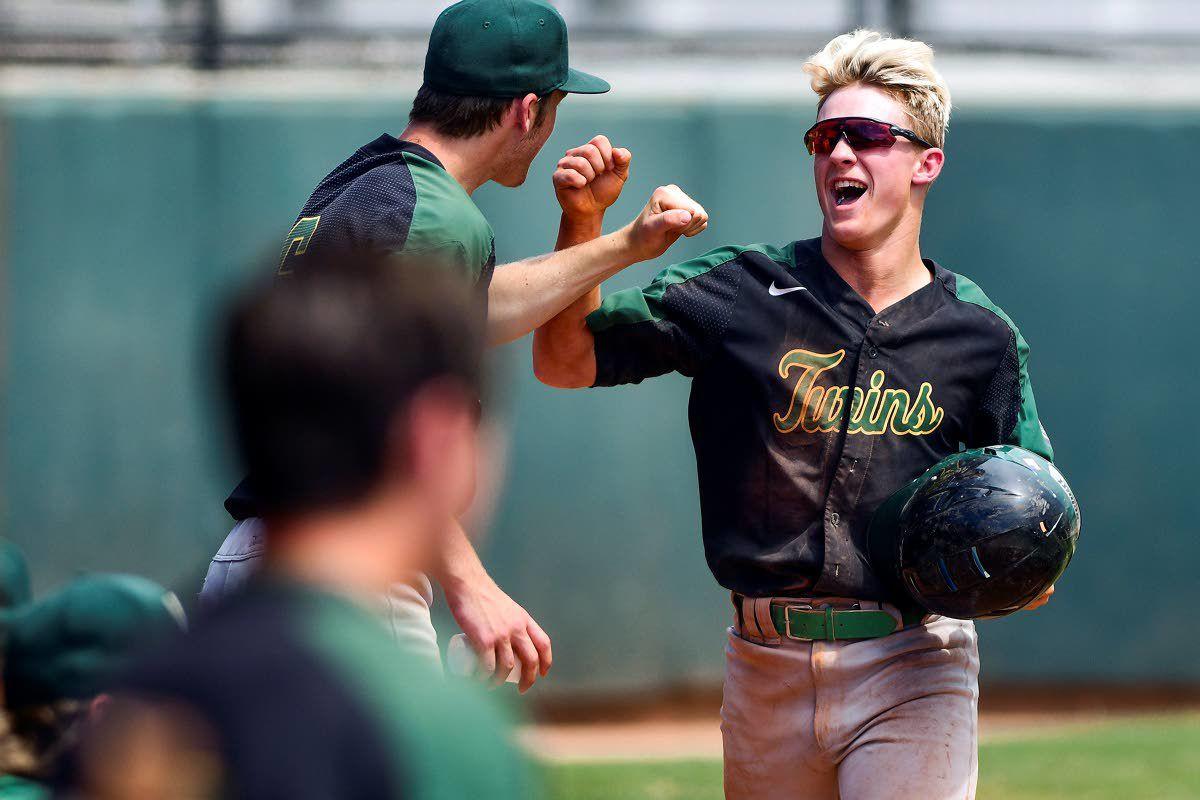 In this 2019 file photo, Lewis-Clark Twins player Brayden Turcott (right) celebrates after scoring a run against Post Falls. The Lewis-Clark American Legion Executive Board voted 12-5 on Wednesday to cancel the 2020 summer season. 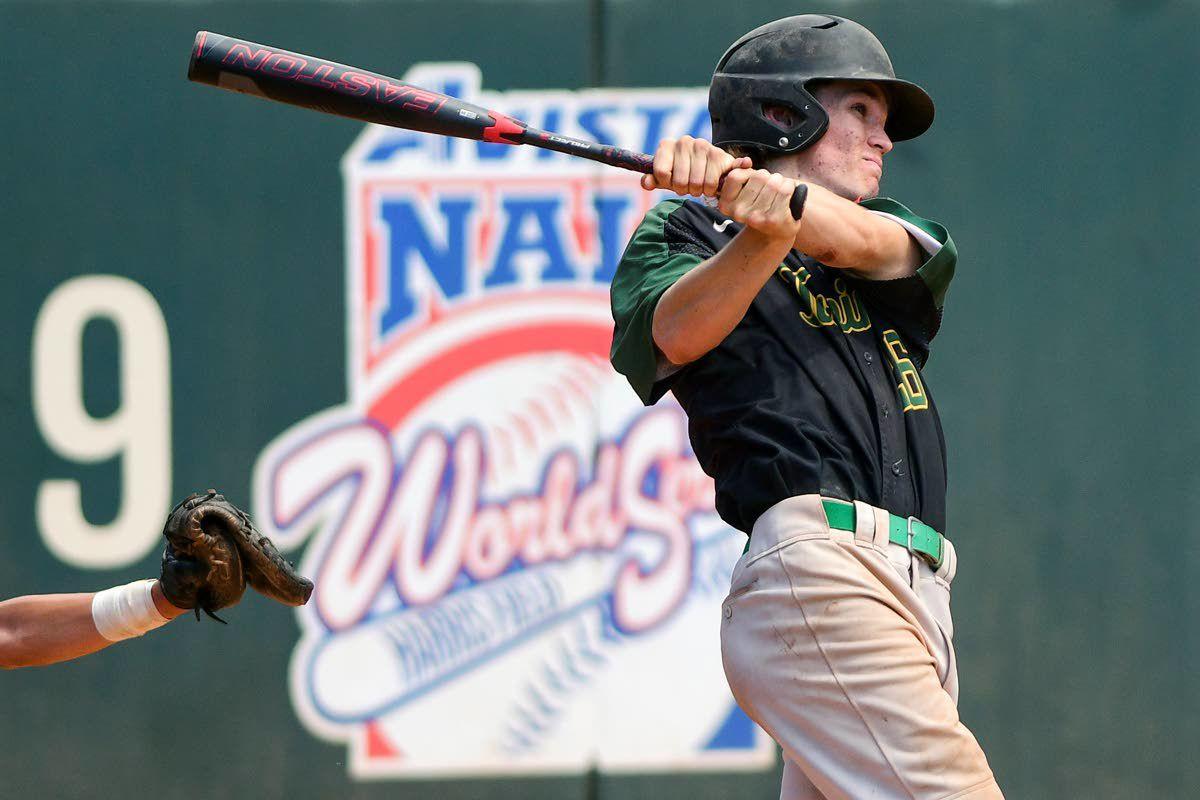 In this June 13, 2019 file photo, Lewis-Clark Twins&#x2019; Dj Ricard makes contact with a Post Falls pitch during the first game of an American Legion doubleheader at Harris Field in Lewiston.

In this 2019 file photo, Lewis-Clark Twins player Brayden Turcott (right) celebrates after scoring a run against Post Falls. The Lewis-Clark American Legion Executive Board voted 12-5 on Wednesday to cancel the 2020 summer season.

In this June 13, 2019 file photo, Lewis-Clark Twins&#x2019; Dj Ricard makes contact with a Post Falls pitch during the first game of an American Legion doubleheader at Harris Field in Lewiston.

The final domino for any chance to see baseball in a coordinated way in the valley has fallen. And it’s not one people in the area who love the national pastime will want to hear.

Despite having robust conversation in a video conference call between Lewis-Clark American Legion Post 13 Executive Board members Wednesday, the group voted 12-5 to cancel the 2020 summer season because of the coronavirus pandemic

“We’re going to be postpone the season for the best interests of the community and of the program,” said Patti Meshishnek, the executive board president. “I have mixed feelings on this because I was very optuimistic early on that we’d be platying. But some of our biggest hurdles we just couldn’t overcome.”

The group has numerous issues to talk through since their previous meeting May 6. They included trying to schedule games, insurance liability issues and protection and safety of not just the players, but the fans.

Meshishnek said the board took into account a suvey of all the parents of the program — which includes the Double-A level Twins, the Single-A level Cubs and the B-level Bucs, who were going to compete for the first time this year — as well meetings with the coaching staff and the major supporters.

“We had a good, robust conversation,” said Meshishnek, who noted a total of 30 committee members participated in the video conference and it did not get heated at any time. “When the topic came up to be voted on, it was hard for a number of our members to vote.”

This comes after a few chaotic weeks of starting, stopping, the re-starting the effort to play Legion baseball this summer.

Moscow Baseball Organization president Dennis Wilson told the Moscow-Pullman Daily News on Tuesday the Idaho American Legion Board of Directors voted 9-2 last week to provide a season in a change of heart. So the MBO reconvened and voted unanimously to also go forward with Legion baseball in Moscow. The Blue Devils Single-A and junior teams will move forward with a season.

Almost a month ago, the Americanism Commission of the American Legion, in consultation with national commander James William “Bill” Oxford, anounced the cancellation of all eight regional tournaments as well as the World Series for this year because of the coronavirus pandemic. However, the national organization left it in the hands of leaders at the local level to make determinations on their seasons.

On May 6, the chairman for baseball for the American Legion in Idaho, Charles “Abe” Abrahamson, said there would be a season, and it would begin in the middle of June and run through Aug. 1.

Then two days later, the national comission, led by Richard Anderson, canceled the Legion’s sponsorship for the entire 2020 season. It did give an out to allow teams to play as independents without adhering to the code of conduct, or the most important part, supplying insurance policies to each post regarding liability.

It caps a succession of events and sports cancellations that have taken place around the world because of the COVID-19 pandemic.

Babe Ruth Baseball and Softball in Lewiston canceled their summer options May 6. Lewiston Little League, which tried to formulate plans to conduct a season, found they couldn’t do so and decided May 11 to abandon an attempt to play an organized season. That group still is attempting to conduct some sort of free activities for children.

“What really tipped us over was when national canceled,” Meshishnek said. “When Little League, Babe Ruth and the NAIA World Series canceled, we started to question why we would play.”

The state Legion organization is following Idaho Gov. Brad Little’s progressive plan for reopening the state from stay-at-home orders. The state currently is under Stage 2 of the plan, which began May 16 and allows gatherings of 10 or fewer people.

Stage 3, set to begin May 30 if there is no significant increases in COVID-19 cases, would allow gatherings of 10 to 50 people, opening the possibility of practices with a full team. June 13, which tentatively is the start of Stage 4 pending requirements being met, is the earliest date games could be played.

District tournaments will take place July 16-18 for B-level teams, while Double-A and Single-A level tournaments run July 21-23. The annual state tournament will begin with its banquet July 27 while games will be July 28-Aug. 1.

“If we lose some of the teams in our District A, then it became who would we play,” Meshishnek said. “We worked on this for two months. It’s not an easy decision, but it’s the best decision for our community and our program.”

In the United States, the Center for Disease Control’s website has reported 1,528,235 confirmed cases, with a total of 91,664 deaths (these numbers typically lag a day behind). According to the Johns Hopkins University School of Medicine website, the number of cases in the U.S. climbed to 1,551,853, with a total of 93,439 deaths, as of 10:30 p.m. Pacific on Wednesday.

Of course, Meshishnek was disheartened for those players who would not get a chance to play, but said the bottom line was safety.

“We’ve got some seniors in their last year and they didn’t get to play, and that’s sad,” Meshishnek said. “But this is a pay-to-play program, and if you can’t offer them a two-to-three month schedule, you have to question whether its feasible.”

Stephan Wiebe contributed to this report.