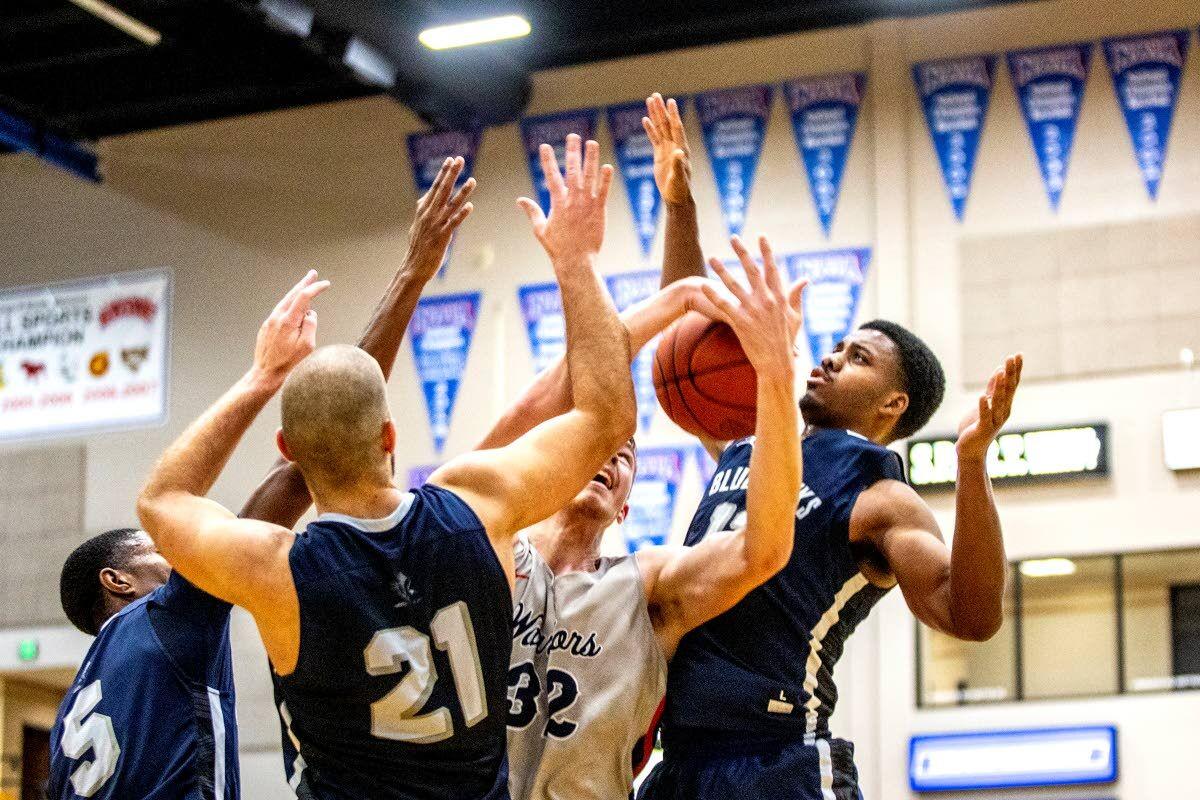 Lewis-Clark State senior forward Trystan Bradley grabs a rebound in between three Dickinson State (N.D.) players during a Dec. 31 nonconference game at the Activity Center. During the Warriors’ recent 6-1 run, Bradley tied, then broke his career high in points. LCSC moved up three spots to No. 4 in the latest NAIA coaches’ top 25 poll released Wednesday. 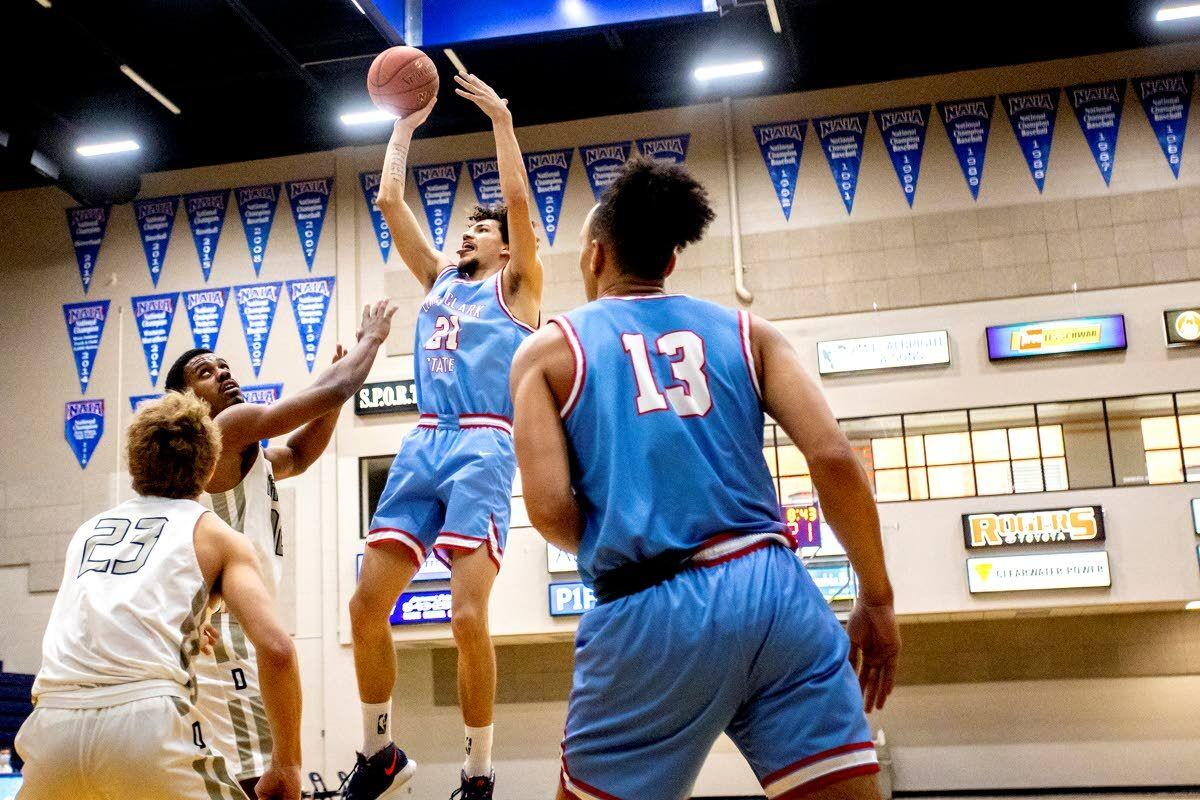 Lewis-Clark State junior guard Nathan Fromm shoots the ball during a Jan. 1 nonconference game against Dickinson State at the Activity Center. Fromm set a career high with 19 points in an 88-79 victory Saturday against then-No. 5 Arizona Christian.

Lewis-Clark State senior forward Trystan Bradley grabs a rebound in between three Dickinson State (N.D.) players during a Dec. 31 nonconference game at the Activity Center. During the Warriors’ recent 6-1 run, Bradley tied, then broke his career high in points. LCSC moved up three spots to No. 4 in the latest NAIA coaches’ top 25 poll released Wednesday.

Lewis-Clark State junior guard Nathan Fromm shoots the ball during a Jan. 1 nonconference game against Dickinson State at the Activity Center. Fromm set a career high with 19 points in an 88-79 victory Saturday against then-No. 5 Arizona Christian.

Having to start, stop, start and stop once again because of COVID-19 issues early in the season, the Lewis-Clark State men’s basketball team has relished the opportunity to be able to step onto the court any chance it has gotten during the first couple of months of the season. So having a stretch of seven games in 11 days recently enabled the team not only to get some action in on the court, but to be able to bond off it.

That’s mainly because the Warriors started the new year playing five games on the road, four of them in Arizona, and two against a top-five opponent. Winning the majority of those games on that trip paid dividends in the end.

LCSC (10-1) rose three spots in the latest NAIA coaches top 25 poll Wednesday, moving from No. 7 to No. 4, achieving its second-highest ranking ever.

“Rankings are a nice show of respect and notoriety for our program, but we know ultimately we have a lot of improving to do to get to where we want to be,” third-year coach Austin Johnson said.

Unfortunately, COVID-19 issues have played a part in more scheduling issues. The men’s game scheduled for 5 p.m. Saturday at the Activity Center against No. 23 College of Idaho was canceled because of virus issues among the Warriors. Also, LCSC announced the women’s doubleheader scheduled for 6 p.m. Friday and 2 p.m. Saturday at home against Simpson (Calif.) also was canceled because of COVID-19 issues within the Red Hawks’ program.

The Warriors’ previous best ranking was No. 3 in the poll that was released Feb. 19, 2020. It was at that point LCSC was 25-1, but then lost two consecutive games before rallying to win the Frontier Conference regular-season and tournament titles before the pandemic hit and shut down the sports world.

The Warriors, who had swept a pair of games Dec.18-19 against NCAA Division III tournament team Whitworth in their toughest test of the season at that point, one-upped that this past weekend. Despite falling 81-76 at then-No. 5 Arizona Christian on Friday, LCSC bounced right back Saturday and got a career-high 19 points from junior guard Nathan Fromm in an 88-79 victory.

That wasn’t the only career high set by a Warrior player during the trip. Senior Trystan Bradley, a former Lewiston High School standout, tied his best point total, then surpassed it 48 hours later. Bradley, a 6-foot-8 forward, tallied 27 points in an 85-71 LCSC win Jan. 4 against William Jessup in a netural-site game in Caldwell, Idaho. He then scored 30 points, adding nine rebounds, in the Warriors’ 83-56 blowout victory Jan. 6 against Benedictine Mesa (Ariz.).

LCSC was able to finally rest most of its starters, with four of them playing just 26 or less minutes, in cruising to a 76-50 win Sunday that finished their almost two-week nonstop run. In the stretch, the Warriors went 6-1, making at least 50 percent of its shots in four of those games while turning the ball over 10 or fewer times in three of those games.

“(That) stretch was pretty wild to pull off logistically, and the fact that we went 6-1 says so much about our players,” Johnson said. “They handled all of the adversities with an elite confidence level. (I was) very impressed with their toughness and togetherness. Hopefully, we can keep moving the season along and enjoy more of those moments together as a team.”

After a 99-48 loss at Carroll College on Nov. 28, the Warriors have won four of their past five games, including gaining a bit of revenge on the Saints when they earned a 60-50 victory Dec. 20 at the Activity Center.

LCSC’s previous game was a 75-39 domination of the College of Idaho on Saturday at the Activity Center.

The next scheduled games for the men’s team are a doubleheader Jan. 22-23 against Yellowstone Christian at the Activity Center. The teams played earlier in the season, with the Warriors winning 82-54 on Dec. 4 and 98-49 on Dec. 5.

The women’s team next will play Jan. 22-23 at Seattle Pacific.