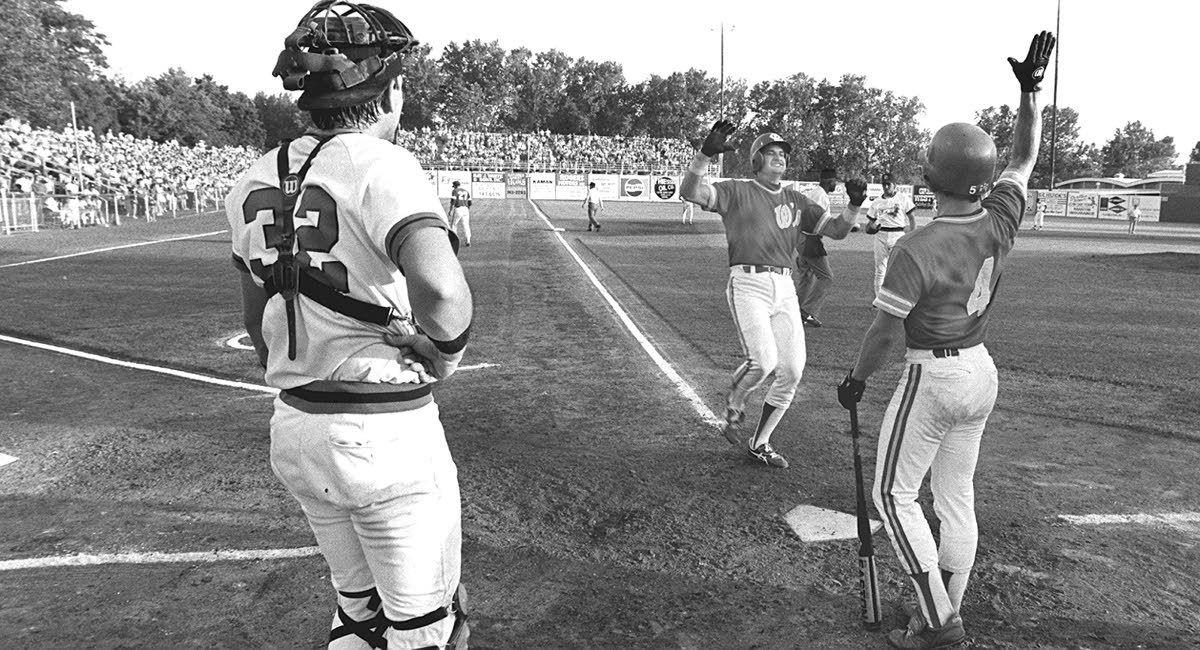 Barry Kough/TribuneLewis-Clark State’s Duane Church celebrates at home plate after hitting a home run over the left-field wall during a 1986 NAIA World Series game against Grand Canyon. Church was a part of the team the next year, when the Warriors started a run of six consecutive titles. 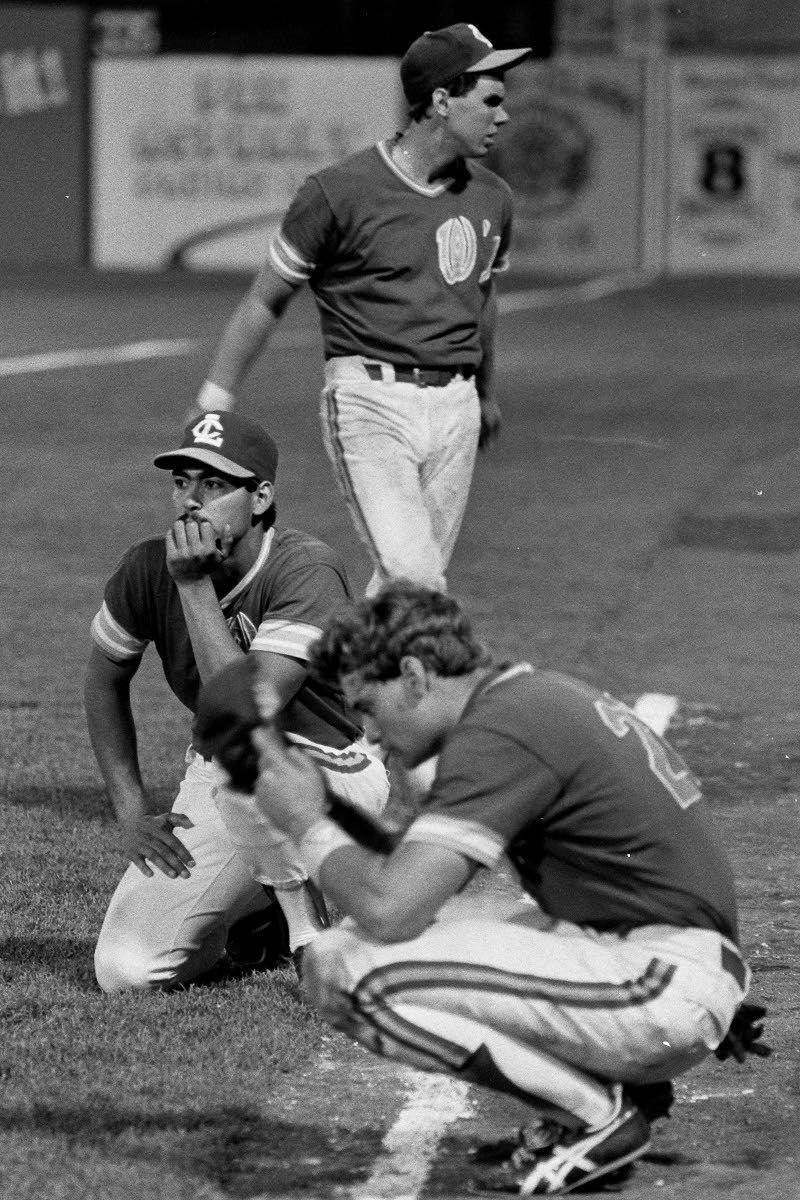 Tribune file photoIt didn’t happen often, but L-C players look dejected after falling in the 1986 Series. They came back and won in 1987.

Barry Kough/TribuneLewis-Clark State’s Duane Church celebrates at home plate after hitting a home run over the left-field wall during a 1986 NAIA World Series game against Grand Canyon. Church was a part of the team the next year, when the Warriors started a run of six consecutive titles.

Tribune file photoIt didn’t happen often, but L-C players look dejected after falling in the 1986 Series. They came back and won in 1987.

In preparation for a nationally televised baseball game on the road against the Pac-10’s Arizona, the University of Minnesota sought a tune up.

As the story goes: the eventual NCAA Regionals-qualifying Golden Gophers called around, and found an open slot against an NAIA program competing at an event hosted by nearby Grand Canyon College.

After some hesitation on the Division I school’s part, Minnesota and Lewis-Clark State were set to square off on March 29, 1987.

“From what I’ve heard, they called up (GCU coach) Gil Stafford, and said, ‘Who can we play for a warm-up?’ And he said, ‘LCSC will be there,’” recalled Lewiston’s Rusty Harris, one of an abundance of stars on that Warriors team. “Their coach says, ‘Who are they? Got anyone else?’”

Outfielder Montie Phillips remembers the Gophers denigrating L-C in local media, poking fun at the school’s classification and asking, “Who even is this team we’re playing?”

“We might have hit 10 home runs that game,” Phillips said. “We kept our foot on the gas, didn’t let up. (Former coach Ed) Cheff talked about that a lot: ‘Once you get them down on the ground, keep them there. Don’t give them a chance to get back up.’ They found out they couldn’t swing a bat with us, and we went through most of their staff.”

The NAIA World Series winners of 1987 sparked a run of six consecutive titles at Harris Field. Those Warriors were among the most well-rounded, talent-laden and ruggedly tough teams to ever be fielded at the school. They were star-studded, top-to-bottom, arguably more so than ever before or after, and with a whole lot more stories like the aforementioned one. And a handful of them had been reared in this valley.

They went 55-10, winning 25 of 26 games at one juncture — counting two victories against the University of Iowa. They came out on top in another 15 matchups against D-I teams, and only lost three times to NAIA foes. In essence, they were built like they belonged in a Power Five conference.

“Most of our rivals were Division I teams, so I think it made it easier for us to play at the Series, like taking candy from a baby, more or less,” Phillips ribbed. “The guys there (at the tournament) were still good, but that was a level we were accustomed to, with every team, every day.”

Altogether, their batting average was barely under .400. They slugged an outrageous .669 and hit an eye-popping 143 home runs. Four players had 15-plus, and the super-slugging Phillips brothers (Montie and Lonnie) combined for 46 homers and 202 RBI.

Many of these Warriors’ records, especially those compiled during their astounding Series run, should forever stand ... unless there were to be some sort of anomaly.

“Like I said 33 years ago, ‘How could you not hit with this lineup?’ The Phillips brothers, Rusty Harris, Brett Holley, Alan Mauthe, Duane Church, Ray Atkinson, Steve Decker — I mean, you couldn’t have asked for better,” said Lewiston’s Pat Mackey, a converted outfielder who hit .449 with 89 RBI overall and batted an astonishing .741 (20-for-27) in six wins in the Series, earning MVP honors. Obviously, that’s still a record.

“Like I said then, ‘By the time I was up, they already had two or three runs in. The ball looked like a softball coming down.’”

The Warriors’ opponents’ ERAs stood at 12.82, against LCSC’s 4.62. The Warriors’ pitching staff averaged seven strikeouts per game with four walks. Of note: Lewiston’s Toby Baldwin, Galen Sonntag and Gus Knickrehm went a combined 24-0; and the group boasted memorable Steves by the surnames Callahan and Reed, the latter a future longtime major leaguer. Ed Ramirez still owns the all-time Series mark for strikeouts by a reliever with 13 in 1988.

“You don’t need a whole lot of pitching when you have a bunch of guys hitting over .400,” laughed Holley, a .429 batter in 1987, “but we had some absolutely great pitchers. Reed was kinda the whipped cream on that team. He just seemed to be the guy whenever we needed a big win. We all had our little runs. One guy would get hot for a weekend, with a supporting cast around him, then another guy the next weekend.”

As for the defense? Harris acknowledged it was among the best he’d been a part of. Cheff had a knack for teasing out new positions for players, then morphing them accordingly. There were several instances of that in 1987.

“That’s just how Ed recruited. He recruited skill sets,” said Harris, whose single-season record of 131 runs scored still stands. “He wanted the best lineups. He saw certain things in people, and he was a great judge of talent.”

Added Cheff, the renowned 34-year Warriors coach known for preaching grindstone work ethic: “You might like a guy, there’s not a lot of room for him at shortstop (for example), but he’s a player, and he can hit and run. If he has the attributes — he might be a high-character guy with great competitiveness — maybe he can be a left fielder.”

LCSC surged through the Series, taking Games 1 and 2 against Anderson and Elon by a combined score of 33-5. L-C had its closest outing against Emporia State (Kan.), a 13-10 decision, then proceeded to thump Southern Arkansas 23-3, then heated rival Grand Canyon 25-11. A raucous environment in the final didn’t really faze the onslaught.

LCSC 11, Emporia State 4. That made it three rings in four years.

“From the first pitch of the tournament, it felt like, ‘OK, we’re going to win every game; we’re going to make this brief, and stamp our mark on it,’” said Church, who played catcher, infielder and designated hitter throughout his career. “It was all pretty spectacular. So many great players.”

“That’s what we leaned on all year — we were going to be able to score runs — but it’s not like you slight the pitching,” Cheff said.

For tournament MVP Mackey, it was extra sweet. Surrounded by some teammates he’d grown up with, Mackey led his hometown college with a week-long display that has yet to be duplicated.

“It wasn’t something I expected, I just wanted to help us win a ring. And we had everything we needed to win,” he said. “I’m not big on living in the past, but I do take pride in those records. They’re made to be beat, but I hope they aren’t. It’s very humbling to be remembered this far along.”

But really, it was sweet all around for the Warriors, who had a similarly stout roster the year before, when they fell in extra innings to GCU in an excruciating title game. A liner dropped just in front of outfielder Larry Price’s glove with two outs, and the Lopes’ clinching run came in.

The call has been disputed. To some, it appeared Price caught it.

“It was the catalyst for a very good team to become a great team,” Church said. “Ed taught us in a number of drills: ‘Don’t make a play close enough that an umpire might make a bad call.’ He didn’t want to play in close games, he wanted to test us. You see that a lot from 1987 on.”

It was particularly palpable that year, when games were — in fact — not close, often against higher-tier competition. LCSC won by an average margin of 13-5.

After 1986, Cheff and the Warriors had additional fire. The team continued its maturation through strenuous practices, many featuring the coach smacking hard-hit grounders at the infield for extended periods. And yet again, Cheff had assembled fall and spring schedules that might’ve been daunting elsewhere. L-C’s reputation was beginning to blossom.

Chipped in Montie Phillips: “We weren’t intimidated by anyone. We put in a lot of work, and anyone could take it out of the park. There was a lot of talent in that group, and we thought we should be winning every game. It didn’t matter who it was. (Cheff) made you fearless.”

Throughout the remainder of what would have been this year’s NAIA World Series, KOZE-AM (950) will rebroadcast Lewis-Clark State championship games of years past. Today, the station will re-air the 2015 title game between LCSC and St. Thomas (Fla).

All games are set to air at 6 p.m. each night through Friday. Mike Tatko, Jay McCall, Denny Grubb and Brian Danner will have a pregame show before each broadcast.