Teams gather on the infield for the opening ceremony of the 2000 NAIA World Series as fans fill the stands at Harris Field on the campus of Lewis-Clark State College. This year was supposed to be the 64th edition of the event, but because of the coronavirus pandemic it was canceled. Recently, the NAIA extended the contract for Lewiston to conduct the Series by one year, pushing the deal out to 2025. 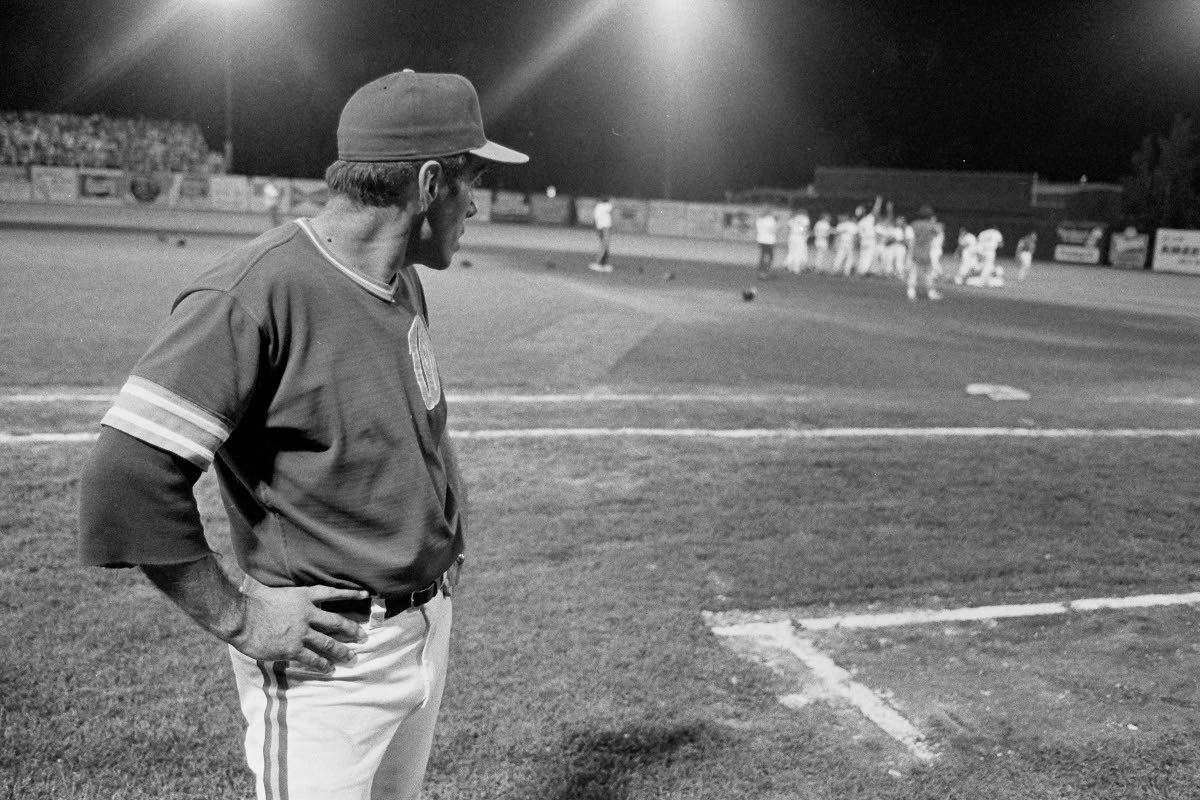 For LC Coach Ed Cheff, it was a rare moment to watch the other team, Grand Canyon, win the 1986 World Series.

Teams gather on the infield for the opening ceremony of the 2000 NAIA World Series as fans fill the stands at Harris Field on the campus of Lewis-Clark State College. This year was supposed to be the 64th edition of the event, but because of the coronavirus pandemic it was canceled. Recently, the NAIA extended the contract for Lewiston to conduct the Series by one year, pushing the deal out to 2025.

For LC Coach Ed Cheff, it was a rare moment to watch the other team, Grand Canyon, win the 1986 World Series.

The NAIA World Series has become part of the valley’s lifeblood, that much is indisputable. For it to have worked — and continued to flourish — baseball would have to be the athletic bedrock of this community, which it is.

Long before Cheff and athletic director Dick Hannan convinced the NAIA to make Lewiston the Series’ home for the first time in 1984, baseball was woven into the area’s athletics history.

There were the massively successful Bengals and the Lewis-Clark Twins American Legion teams, headed by the late, celebrated coach Dwight Church. There also was the 24 years of minor-league baseball for the Lewiston Broncs, who went defunct in 1974.

“I remember being young and going to Broncs games, and being the Twins’ ballboy,” said Duane Church, a Lewiston native, standout Lewis-Clark State catcher/infielder in the mid-1980s and Dwight’s son. “I watched great ballplayers. Those were your heroes, and you keep chasing them. ... There was a general love for watching the game in the valley.”

Then there were the Warriors, who grew from regional contenders in the mid-to late 1970s, to a national power boasting 19 titles — 16 at home — and 139 players drafted into pro baseball.

LCSC not only preserved a track record of baseball interest, but boosted it to a peak that kept climbing, especially with Cheff at the helm from 1977-2010, incorporating a storied grindstone method that pushed everything to new heights, and remains ongoing. Church highlighted an ultra-competitiveness and “refusal to quit” that cropped up under Cheff, then persisted into the future.

And to check each L-C roster is to see a multitude of local-bred players, many of whom have achieved stardom at the NAIA’s top level.

“Baseball’s ingrained in this society,” said current LCSC coach Jake Taylor, an infielder with the Warriors in 1992 when they won the title, “and it’s been like that long before myself. The people here established a culture.

“It truly is a baseball town. I remember being recruited here and hearing, ‘It’s the mecca of baseball on the West Coast.’”

So it’s not hard to see why the community has latched onto the tournament so ardently. If it weren’t for its cancellation because of concerns with the spread of the coronavirus, Harris Field would be playing host to its 21st consecutive Series this week, and 29th overall.

“The baseball coaches really got behind the idea, because the Series didn’t have much stature (before the 1980s); it had very little community support,” Cheff said. “They knew there was some history in Lewiston.”

Since its first time staging the Series 36 years ago, Lewiston has beefed up its facilities and the relevance of the tournament, which is covered in full by local media. Even decades ago, other sites couldn’t compare, in terms of baseball allure. And at other sites, there weren’t host-team players taking time out of their practices to construct tournament amenities.

“That ’84 team probably worked more hours on the facility than it practiced,” said Gary Picone, a former Warriors player, coach and athletic director who helped the Series return to Lewiston in 2000 after an eight-year absence — moved in the first place simply because the Warriors kept winning.

Despite gripes about home-team bias and a lack of true neutrality, the ­tournament has fashioned the pageantry, exposure, game-time environment and crowds the sport typically only sees at the highest level — in a classification where that’s not the norm. Just last year, Harris Field had its 1,000,000th fan walk through its gates for the Series. About 600 volunteers give up their Memorial Day weekends to help it run smoothly.

“When I think about the Series, I think about this place — this region, really — and how it’s maintained this support and enthusiasm for such a long period of time,” Picone said. “If you care about something, you can run it a few times. You just have to generate enthusiasm. But to do it 20-some times, that speaks to the investment, and how the region has adopted and rallied around this thing.”

Warriors athletic director Brooke Henze said the Series pays a handful of salaries for L-C staffers, and has an economic impact of between $2 million to $3 million annually on the community. It’s meaningful financially for other NAIA programs too.

The primary component of the hosting bid written up by Picone and Co. 20 years ago was that visiting teams would be reimbursed for certain expenses, travel costs in particular.

“That was a whole new concept in the NAIA,” Picone said. “The history was here, and that got us over the top.”

It would’ve been difficult then for Picone to envision what it would become. Now, it’d be tough to imagine a spring without the tradition, which has spawned local cult followings for NAIA teams that are far from here, as well as the innumerable must-see games and annual oddities — and untimely rainstorms aplenty.

“The community caught it, and doesn’t want to let it go,” former LCSC coach Jeremiah Robbins said. “Obviously, there’s an economic impact, but it goes beyond that. I’ve met families that park their RVs there the entire week. It’s a time to give to something bigger than themselves. It’s unmatched.

“The community has always been proud of its baseball. You’ve had some legends there, and all the people volunteer their time to make something great. Why move it when no one else does what they do?”

Lewiston’s Series contract with the NAIA runs out in 2025, but “we want to keep it here as long as we possibly can,” Henze said. She said the past couple of months have been disorienting, knowing the community will be without its staple.

But a one-year hiatus won’t alter a culture that began to be cultivated a century ago, then reached a new pinnacle thanks to Lewis-Clark State’s striking track record.