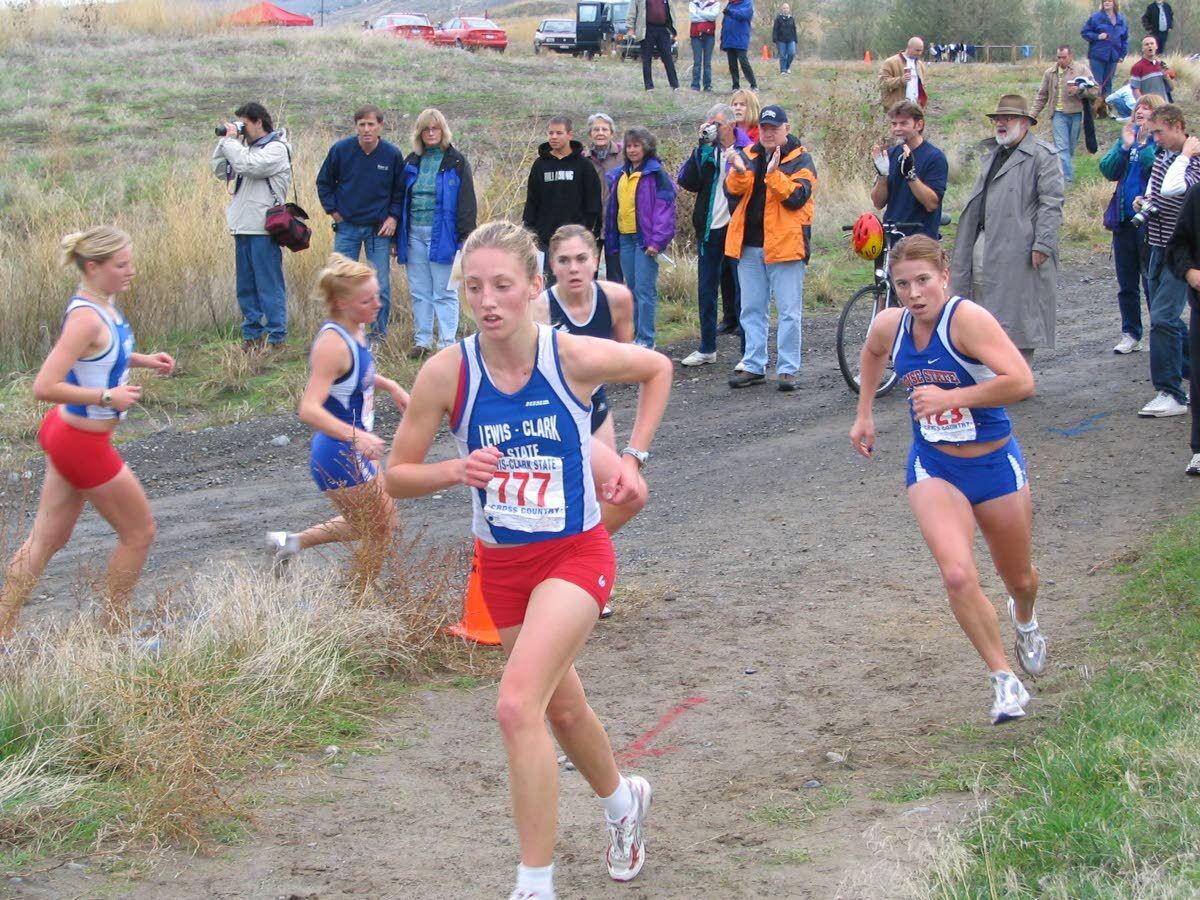 Tausha Kuzmic (Patterson) is shown running for the Lewis-Clark State cross country team in about 2004. Kuzmic won the NAIA women’s marathon at the 2005 national meet, setting the school record. She will be inducted into the LCSC athletic Hall of Fame in a ceremony in April. 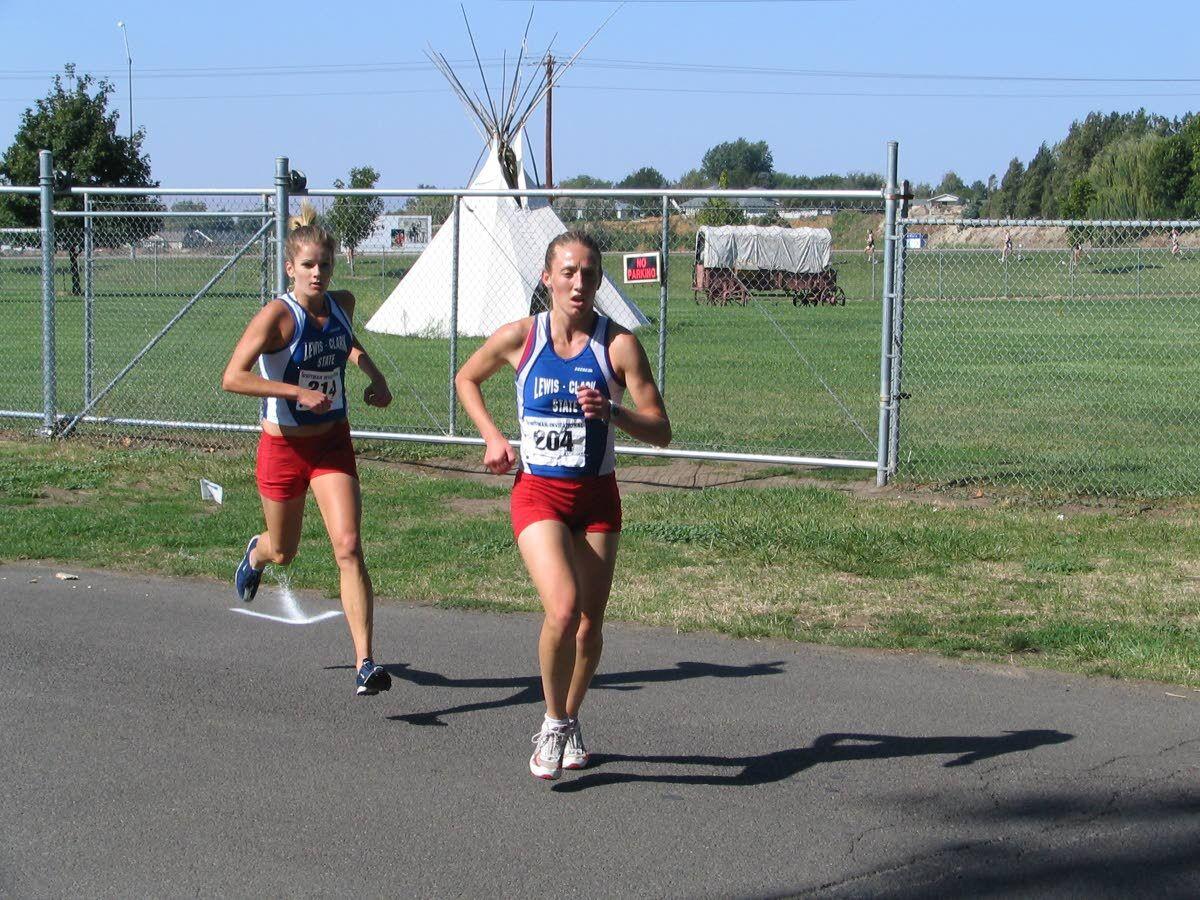 Tausha Kuzmic (Patterson) runs during her time at Lewis-Clark State.

Tausha Kuzmic (Patterson) is shown running for the Lewis-Clark State cross country team in about 2004. Kuzmic won the NAIA women’s marathon at the 2005 national meet, setting the school record. She will be inducted into the LCSC athletic Hall of Fame in a ceremony in April.

Tausha Kuzmic (Patterson) runs during her time at Lewis-Clark State.

This is the first in a series of profiles of 2021 inductees into the Lewis-Clark State athletic Hall of Fame.

Early in her freshman year in the Lewis-Clark State track and cross country program, Tausha Kuzmic scanned the team bulletin board and zeroed in on a newspaper story about a former Warrior distance runner.

She admired the runner, Marissa Thompson, but that wasn’t exactly the point. She felt a yen to surpass the woman’s accomplishments.

“That’s going to be me on that board,” she thought.

Two decades later, she’s headed for more than a bulletin board. In a ceremony in April at the Clearwater River Casino, she’ll be inducted into the school’s athletic Hall of Fame.

Kuzmic (KUZ-mick), who’s now a nurse in Florida and goes by Tausha Patterson, capped her four-year LCSC career in 2005 by winning the women’s marathon at the NAIA national outdoor track and field meet. In the first marathon of her life, she covered the 26.2 miles in 2 hours, 57 minutes, 56 seconds, which remains a school record.

This was early in the career of coach Mike Collins, who now has headed the cross country team for 23 years and the track program for almost as long. Kuzmic gave Collins his first national title, and he was especially struck by its timing: It coincided with her final year of nursing school, which perhaps was just as grueling as the race.

Since signing Kuzmic out of Nampa, Idaho, in 2001, Collins always had seen her as persistent and overachieving. As a freshman competing in the NAIA national cross country meet in 2001, she somehow lost a shoe early in the race and stopped to retrieve it. She put it back on, resumed running and finished 45th. The LCSC contingent she spearheaded that year, in qualifying as a team for the women’s national meet, began a streak of achieving that feat that now stands at 19.

But during her march to that marathon title, her workouts were more smart and consistent than intense because she was juggling them with lengthy nurse-training sessions at a hospital.

Kuzmic, who works in the cardiac intensive-care unit of a hospital in Tampa, Fla., seems to embrace that overachiever tag and attributes her resolve partly to her family background. As the seventh of 10 children — and the first girl — she had no choice but be assertive.

“Six older brothers,” she marveled during a recent phone interview. “They basically — well, dating was a little difficult, because they were all about, ‘OK, who’s this guy? Take down his license plate.’ They were pretty protective, which was great but at the same time a little overbearing.”

Three of those older brothers were distance runners, so workouts were a family affair. Kuzmic began entering 5-kilometer races as a child and wound up winning an Idaho state cross country title as a senior at Vallivue High School in Caldwell.

In her nursing career, of course, her work ethic is invaluable these days in the midst of the coronavirus pandemic.

“Oh my goodness, it’s crazy,” she said. “There’s so much learning to do and so many changes that occur. You try to follow the CDC guidelines as well as you can. But even the CDC — this virus is new and they’re trying to do their best giving us instruction. One day we’re told to do something and the next day it all changes and you’re doing something else. You have to be very patient.”

Kuzmic is married to another former LCSC runner, Chris Patterson, the first Warrior man to qualify for the NAIA cross country meet. His military service is what took them to Florida, and he now works in information technology in the medical field. They have a daughter, Syrena, who is almost 2.

In Kuzmic’s first few years after graduation, she ran four more marathons while pursuing a berth at the U.S. Olympic trials. An old hamstring injury and her shifting priorities prompted her to abandon that goal, but she continues to compete in fun runs.

She plans to travel to Lewiston for the Hall of Fame ceremony April 24. If some young runner reads a media account of the induction and resolves to outdo her someday, Kuzmic laughingly said she’s fine with that.

But that would be a tall order.

“If not for her,” Collins said, “our running program as a whole would not be where it’s at.”