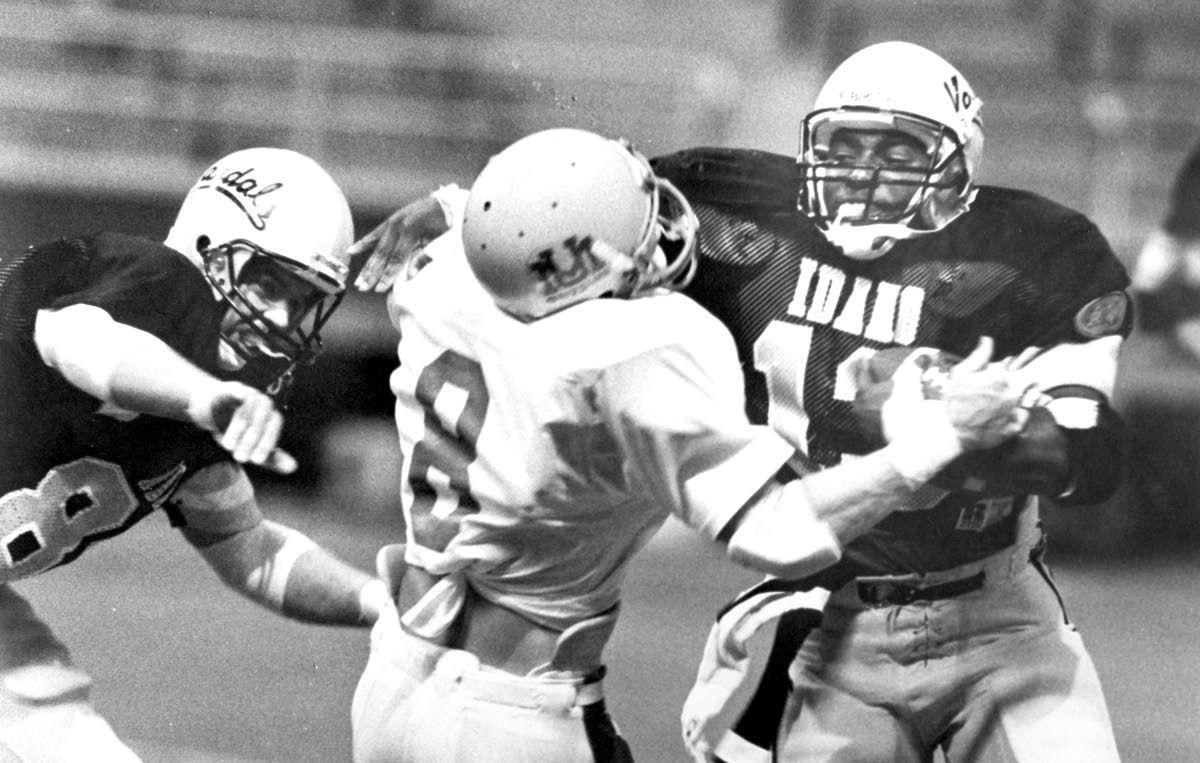 Tribune fileIdaho running back Larry Leverett (right) pushes aside Montana safety Nate Odden during a game in 1987 at the Kibbie Dome in Moscow. The Vandals won 31-25 to claim the Little Brown Stein for the sixth straight time. 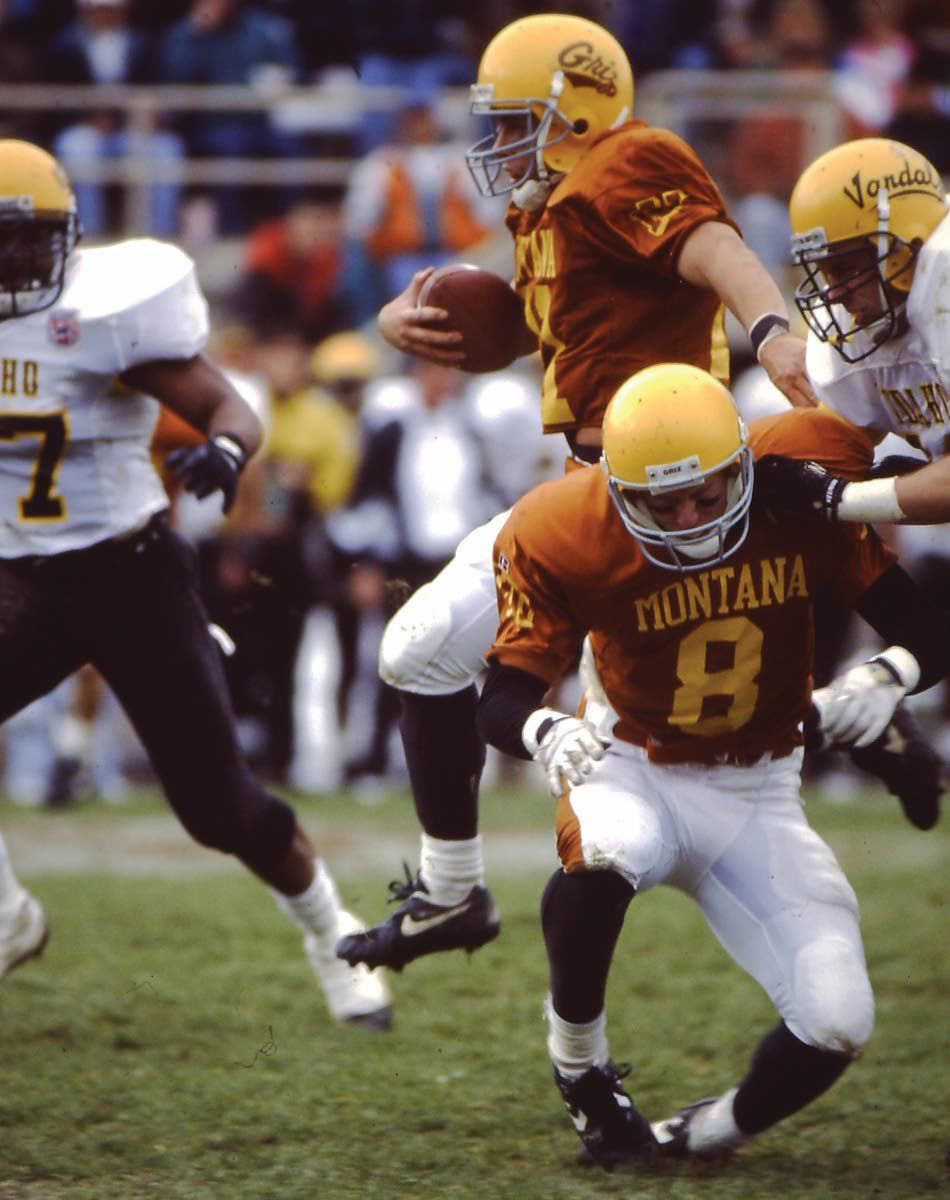 Montana AthleticsMontana quarterback Dave Dickenson (with ball) runs during the game against Idaho in 1994. 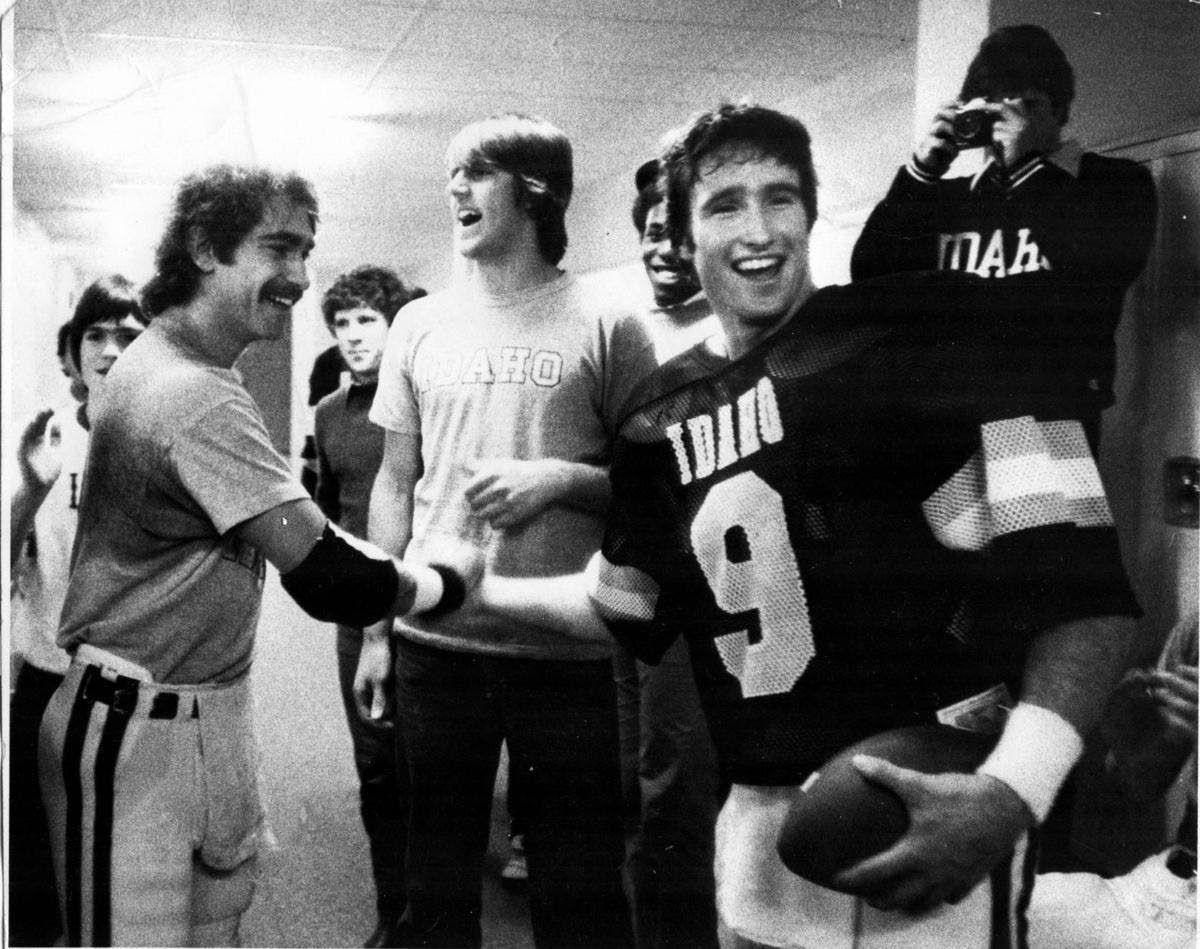 Tribune fileIdaho running back Larry Leverett (right) pushes aside Montana safety Nate Odden during a game in 1987 at the Kibbie Dome in Moscow. The Vandals won 31-25 to claim the Little Brown Stein for the sixth straight time.

Montana AthleticsMontana quarterback Dave Dickenson (with ball) runs during the game against Idaho in 1994.

When Idaho junior quarterback Ken Hobart sauntered out of the tunnel before a 1982 Big Sky Conference game against Montana at the old Dornblaser Field, he had his helmet tilted up, resting on his head.

The former All-American wishes he would’ve had it strapped.

“You had to watch out for flying potatoes in Missoula,” Hobart said. “I was wearing contact lenses, and then I went, ‘Ahh!’ It was like someone poured bleach in my eye.”

It wasn’t an auspicious start for the 14th-ranked Vandals, playing their first year under head coach Dennis Erickson, a Montana State grad.

They were battered 40-16 by standout quarterback Marty Mornhinweg and the underdog Grizzlies. Hobart called his outing “one of my worst” out of 47 played in an illustrious career.

“My eye was beat red,” Hobart said. “Then after that, to not knowing where I was or who I was, getting throttled. It was just one of those days.”

But like clockwork in this battle for the elusive Little Brown Stein wooden traveling trophy, there was a turning point just ahead for Idaho.

Six weeks later, the rolling Vandals and slumping Big Sky champion Griz met in the Division I-AA playoffs in Moscow — it was each teams’ first playoff appearance, and both took off from there.

Hobart was efficient; star linebacker Sam Merriman made four consecutive tackles on a goal-line stand and UI won 21-7 on a soggy turf, inside a leaky-roofed Kibbie Dome.

The result ramped up the long-running rivalry to a level of ferocity that remained until the Vandals departed the Big Sky for a higher classification in 1996.

“Games like that are what college football’s all about,” said Hobart, who went 3-2 against UM. “It was always intense. We got it cracking, though.”

Said Hobart’s former teammate, all-league safety Boyce Bailey: “That season elevated the Montana rivalry. We had a bad taste in our mouths, then the NCAA sent (UM) to Moscow. Combine all that, and everyone’s got heated motivation.”

The 116-year-old feud didn’t surpass Idaho’s rivalry with in-state foe Boise State. But unlike Broncos-Vandals, the Stein game from 1982-95 featured perhaps the best stretch of back-and-forth competition UI’s had with a single opponent.

Idaho owned a 10-6 edge in that period. Both teams were ranked in six of those meetings, and oftentimes, favorites were toppled. The Broncos were steadily talented, but UI never had trouble with them — it won 12 straight against BSU from '82-93.

“They were always high-ranked teams, and we were the same,” 1986-88 UI coach Keith Gilbertson said. “There was always a lot riding on it. We were usually right at the top of the standings, fighting to be champions.”

They combined for eight Big Sky titles. In the playoffs, "the team that won, the other team usually went farther," said current UI coach Paul Petrino, who took part as an assistant coach for the Vandals from 1992-94.

College Football Hall of Famer John Friesz, who starred as Idaho’s quarterback from 1987-89, can attest to all that contention.

In November 1988, the three-time All-American was picked off four times, including the game-clincher with fifth-ranked UI down two, in the red zone, and about a minute to go.

“Just a dumb call on my part,” Gilbertson said of UI’s lone regular-season loss that year. “But at the same time, we won a bunch of games against them (3-1), so I must’ve made some good ones too.

“And John had some wonderful games against Montana.”

The Vandals claimed their next nine games en route to a league title. Almost prophetically, Friesz and Gilbertson got another crack at UM at home in the playoffs.

Friesz, who was born in Missoula, went for 400 yards and three touchdowns, and UI smacked UM 38-19.

“Constantly a lot at stake,” Friesz said. “I was so excited, so thankful for another opportunity against them. To beat them felt very, very good.”

Although Friesz had a career day the year after — throwing for 437 yards in a nationally-televised 30-24 win against the Griz — he said the 1988 regular-season game still sticks with him.

Probably because it was strange, antithetical to Friesz's usually glitzy performances week in and week out.

It was simply a perfect fit in the long line of wacky, unforgettable moments produced by the pass-first offenses and bruising defenses of the Stein games, which the Vandals mostly controlled in the 1980s on the shoulders of Hobart, Scott Linehan, Friesz, a stable of UI greats surrounding them, and Erickson’s coaching tree positioning them for success.

“That was such a unique bunch. They were real competitive, real smart teams,” Gilbertson said.

According to some former players, coach John L. Smith (1989-94) put a premium on the UM game because:

3) The programs were always fighting for recruiting grounds.

The Griz owned the series in the early-1990s, with Lewiston grad Brad Lebo quarterbacking before all-time UM great Dave Dickenson took over in 1993. Savvy coach Don Read led the charge from 1986-95.

“It was a mutual respect,” Friesz said. “It was, ‘You guys better strap your chin straps a little bit tighter this week.’ There was never ill will, just good battles among teams that were perennials.”

There was UI’s second-half comeback from three scores down in 1984. It enlivened the struggling 2-5 Vandals, who won 40-39 on a late touchdown, then won their past four.

“You’re just scratching your head, like, ‘Is this the same team?’” Bailey said. “That catapulted us, really changed the next few years of Idaho football.”

Then there was the 1990 dominance of former Big Sky MVP Jeff Robinson.

The No. 17 Vandals cruised past No. 19 Montana thanks to two interceptions by Robinson — a defensive end — on attempted screens. His second, with the clock hitting zeroes in the first half and defensive coaches already in the locker room, went down in the annals of UI football history.

Robinson took the pick from his own 20-yard line, but began to run out of gas around UM’s 30, as Griz skill players caught up. He lateraled it to fellow D-end Billy Sims, who rumbled the rest of the way for a crucial score in the 35-14 win.

A year later, Montana and Lebo swiped the series momentum by rallying from down 21-0 in the Dome to stun UI 35-34 in overtime on a blocked PAT, stuffing Idaho’s playoff hopes. Underachieving Montana took Idaho down another peg in 1992, when it embarassed the No. 2 Vandals and picked apart their nickel defense 47-29 in Missoula.

“That crowd was right on top of you,” Shelt said of the always-rowdy environment in Missoula. “You learn real quick. That’s an event. (The crowd) was throwing little 1-ounce shooters of Jack Daniels and tagging some of us on the helmets.

“The coaches were like, ‘Don’t you dare take those helmets off.’”

Dickenson bagged consecutive shootouts against Vandal legend Doug Nussmeier, the school’s all-time passing leader. Both teams were top 10 in 1993-94. In the latter season, both were 7-0.

“It just continued when greats left; new ones stepped up,” Shelt said.

As did Eric Hisaw, an unsung two-year quarterback who came at the tail end of the Vandal gunslinger pantheon. In 1995 — the teams’ last conference tilt — Hisaw, a senior, erupted for five first-half touchdowns in a record-shattering showing. Phillips pointed at the game as the “most memorable” of his Vandals career.

Hisaw threw six touchdowns to snap No. 6 UM’s four-game Stein winning streak; Dickenson broke three Griz passing records; the teams combined for 1,006 yards and unranked UI held on 55-43 after being up 33 at the half.

And of course, Montana won the Division I-AA national championship that year, its first.

First-year UI coach Chris Tormey said after the game that he’d almost had a heart attack. It was a fitting time to take a break from Little Brown Stein play — it was back-and-forth ridiculousness incarnate, and another turning point.

“That’s something I can look back on — I can still smell the air of the Kibbie Dome, I could tell you the plays, how it worked, what downs,” Hisaw said.

“It was just two perennials, going toe-to-toe, like every year.”