Lewiston TribuneABOVE: Dennis Erickson (center) leads the Idaho Vandals onto the Kibbie Dome turf for a game against Weber State during his first year as coach of the Vandals in 1982. BELOW: He’s shown coaching the Seattle Seahawks in 1998. Erickson is being inducted into the College Football Hall of Fame tonight in New York. 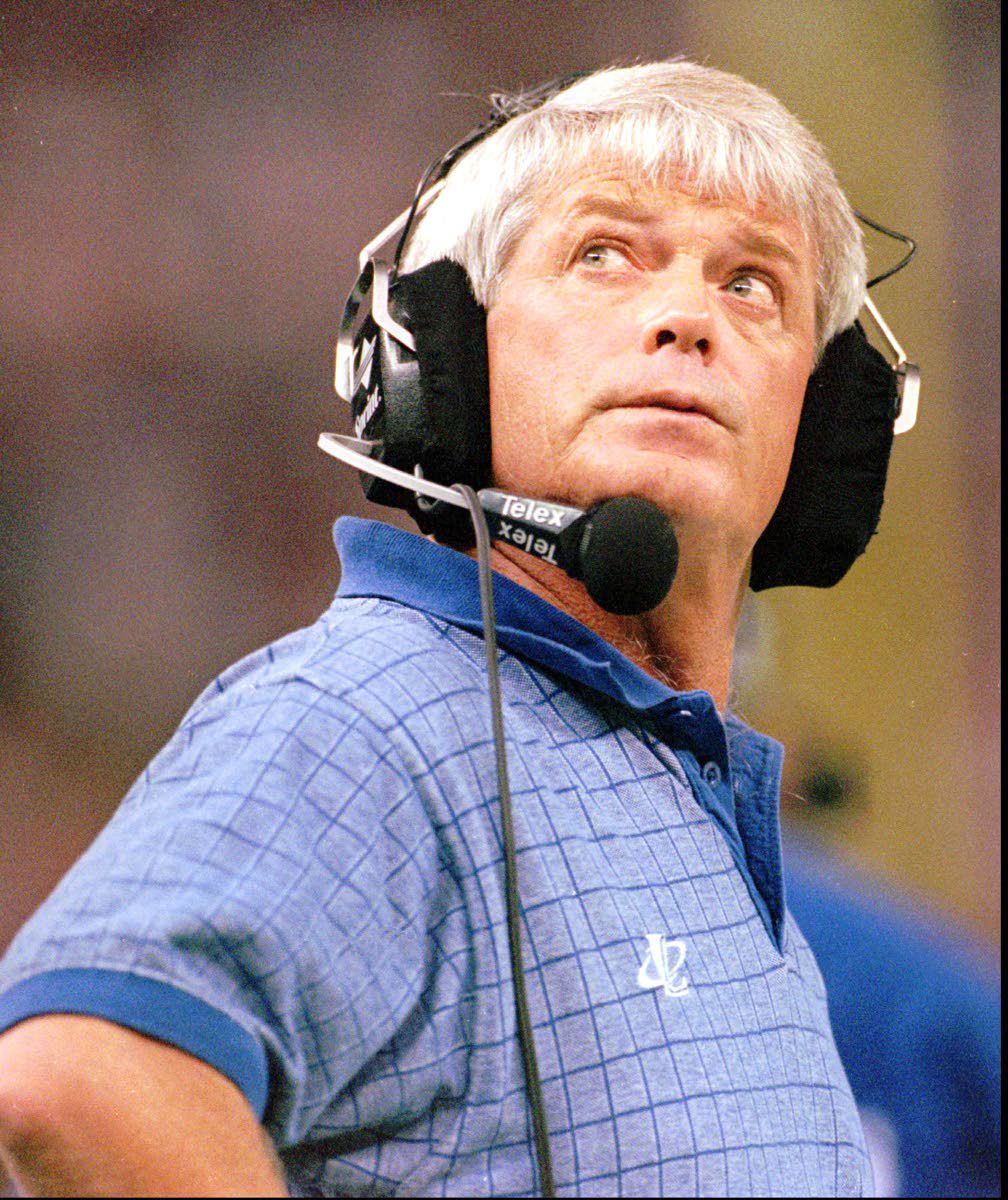 Seattle Seahawk coach Dennis Erickson watches the replay screen during their loss to Denver Oct. 11, 1998 in Seattle. "We need to get on a roll," says Erickson, if they are going to make the playoffs. This week, the Seahawks have some time to work on their problems as they have a bye week. (AP Photo/Barry Sweet, File) 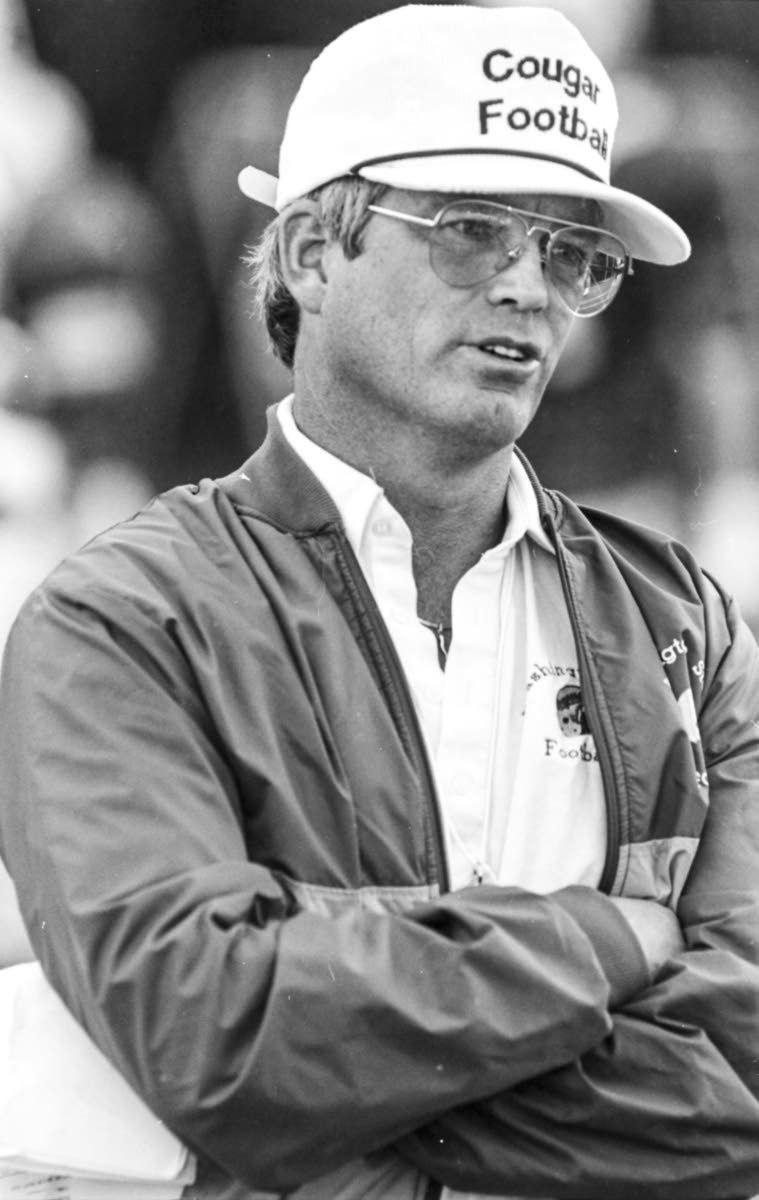 Lewiston TribuneABOVE: Dennis Erickson (center) leads the Idaho Vandals onto the Kibbie Dome turf for a game against Weber State during his first year as coach of the Vandals in 1982. BELOW: He’s shown coaching the Seattle Seahawks in 1998. Erickson is being inducted into the College Football Hall of Fame tonight in New York.

Seattle Seahawk coach Dennis Erickson watches the replay screen during their loss to Denver Oct. 11, 1998 in Seattle. "We need to get on a roll," says Erickson, if they are going to make the playoffs. This week, the Seahawks have some time to work on their problems as they have a bye week. (AP Photo/Barry Sweet, File)

Living as he does on the shores of Coeur d’Alene Lake in northern Idaho, Dennis Erickson is accustomed to encountering friends from the football world. Several of them own property in the area.

But one of them, Denver Broncos general manager and former star quarterback John Elway, must evoke distinctive memories. As a high-school player four decades ago, he played an indirect but significant role in the development of Erickson’s coaching philosophy.

Tonight, the former Idaho and Washington State coach will join Elway in the College Football Hall of Fame. He and 14 others, but only one other coach (Joe Taylor), will be inducted in a ceremony at the Hilton Midtown in New York.

Considered one of the prime developers of the now-ubiquitous spread offense, Erickson, 72, owes his introduction to such schemes to a three-year stint as offensive coordinator at San Jose State under Elway’s father, Jack, who himself was in the throes of a romance with the spread.

Jack Elway had spent the previous three years coaching Cal State Northridge near Los Angeles, where his son was a quarterback of distinction at Granada Hills High. The boy was immensely talented but he was also benefiting from a bold idea hatched by Granada Hills’ unconventional coach, Jack Neumeier.

It was a formation that used one running back — as opposed to the standard two or three — and put an emphasis on throwing the ball to any of three or four wide receivers. In other words, it was an early version of the spread. When Erickson later got a chance to see it, he was blown away.

“It really jumped out at you, because it created mismatches,” he said by phone Monday from New York.

San Jose State and its unusual offense went 22-11-1 during Erickson’s time there, stunning a Baylor team in 1980 that would finish 10-2. The next season, the Spartans claimed a conference title.

Years later, defensive coaches learned to blunt the one-back’s effectiveness by inserting extra defensive backs. But during Erickson’s early years with the spread, first at San Jose and later as head coach at Idaho, defenses tried to make do with traditional tactics.

“Nobody was playing nickel or dime or any of that stuff, so you have a linebacker on a slot receiver,” Erickson said. “When you’ve got a linebacker trying to cover (then-UI receiver) Eric Yarber, it’s not a real good matchup. We did that to Baylor. We spread them out so they ended up having Mike Singletary covering a receiver, as opposed to knocking the crap out of you on the ground.”

Erickson and the spread prospered at Idaho, Wyoming and Washington State, where the Cougars’ impressive 1988 season propelled him to then-powerhouse Miami. When he’s enshrined in the Hall tonight, his two national titles with the Hurricanes will get prominent mention.

In the Pacific Northwest, though, he’s best remembered for successful rebuilding projects at Idaho,WSU and especially Oregon State, where in 1999 he led the Beavers to their first winning season in 29 years. A season later, they went 11-1 and beat Notre Dame in the Fiesta Bowl.

Those years are dear to Erickson.

“Obviously, the deal at Miami was two national championships, but that was almost as hard as the rebuilding projects,” he said. “To keep that level for six years, it’s hard. Rebuilding was a lot of fun.”

Erickson supposedly retired in 2016 after a four-year stint as an assistant at Utah. But nobody close to him was surprised when he accepted the head-coaching job last year with the Salt Lake Stallions, a member of the Alliance of American Football that met financial problems and disbanded in April after just eight weeks’ worth of games.

Erickson doesn’t rule out another comeback. In the meantime his innumerable connections — he has a preternatural ability to remember the names of people he hasn’t seen in years — help him stay close to the game.

Last spring he attended Oregon State drills conducted by one of his former Beaver players, Jonathan Smith. He remains close to the program at his alma mater, Montana State. When his son Bryce was head coach at Lake City High in Coeur d’Alene, Erickson spent a year assisting him prior to the Stallions gig.

For Erickson, football itself has always been more enjoyable than its peripheral aspects, even the critical ones like recruiting and the unexpected ones like adulation. But he’s not playing down tonight’s Hall induction.

“It’s the biggest honor you can get in this profession, college coaching,” he said. “I’ve been doing this close to 50 years. I enjoyed every second of it. It wasn’t a job to me, it was fun. I was raised on it. My dad (the late Pinky Erickson) was a high-school coach and worked for me at Idaho as a volunteer. I’ve been in locker rooms since I was in first grade.”

“The San Francisco thing was just stupid,” he said. “I didn’t do my homework. I should never have taken that job.”

He enjoyed his time with the Seahawks but expresses one regret. Now that the spread offense has finally broken through to the NFL, he believes he should have ignored advice he was getting and stayed true to his roots.