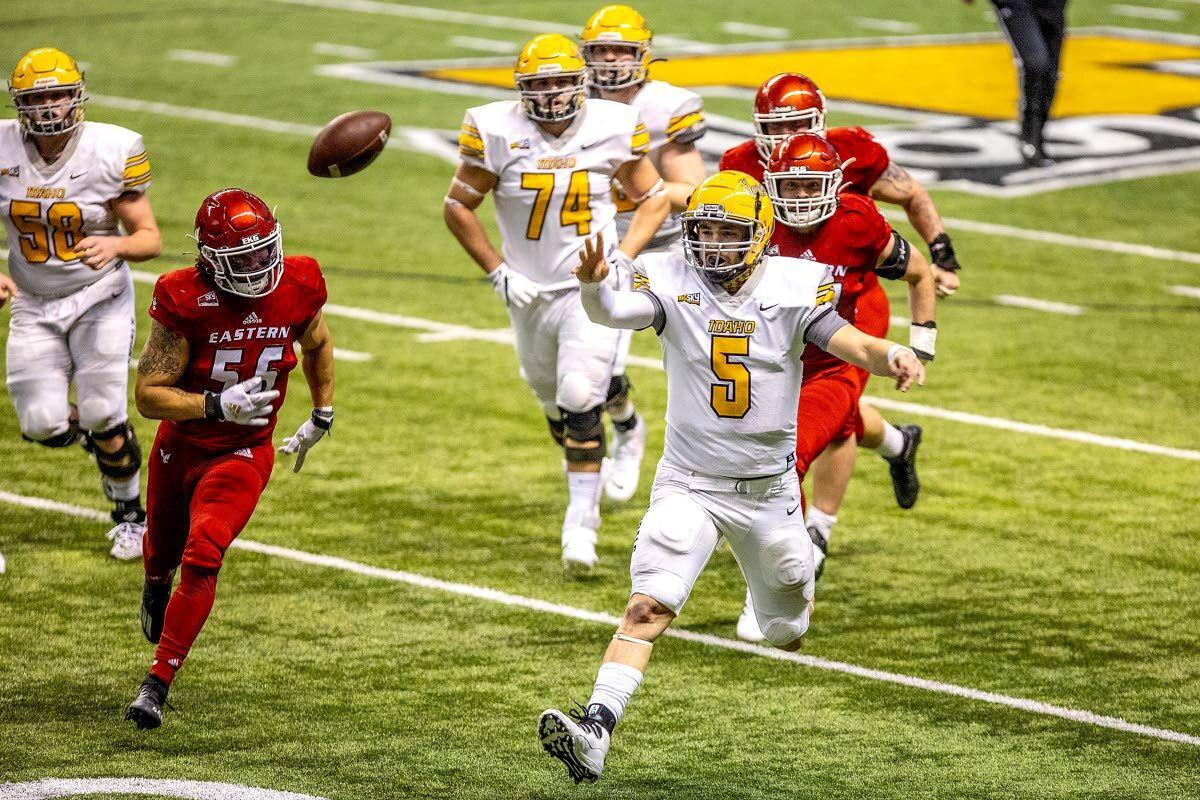 Idaho quarterback Mike Beaudry flips the ball to a receiver during a Feb. 27 Big Sky Conference game against Eastern Washington at the Kibbie Dome. 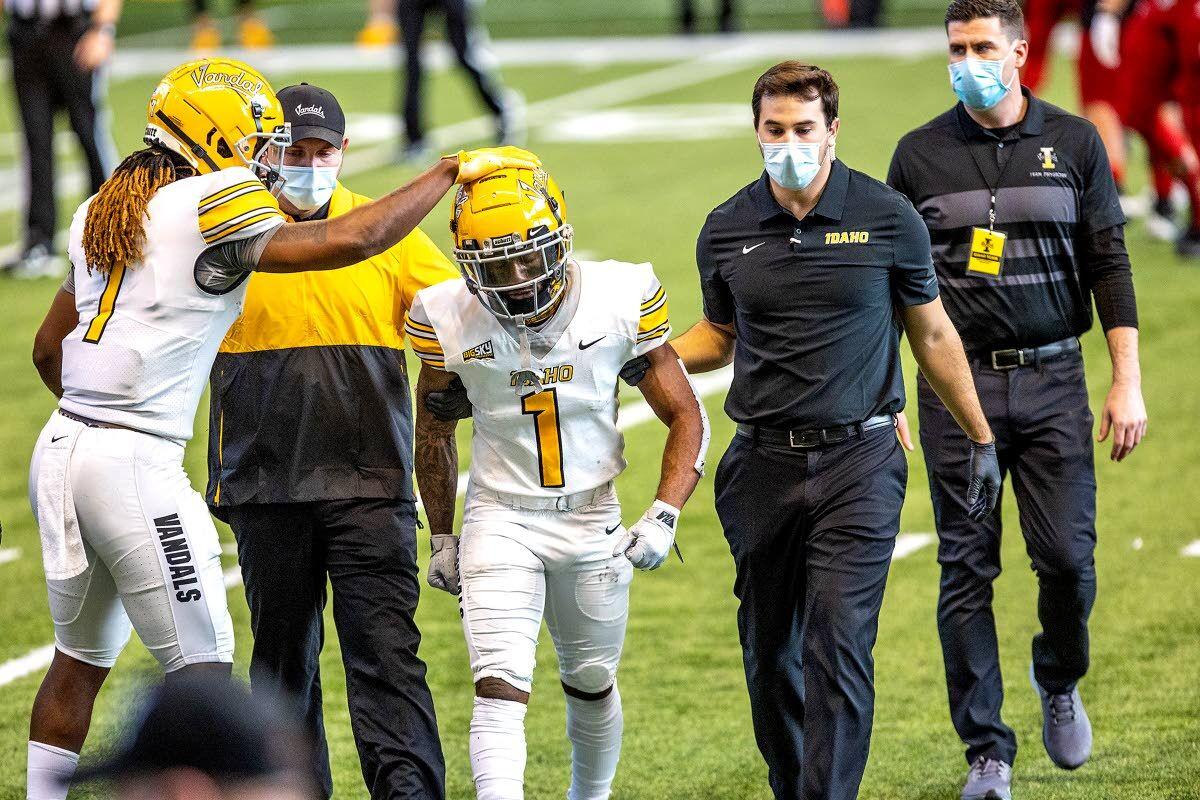 Idaho receiver Jermaine Jackson (center) is questionable for today’s game against UC Davis because of an injury he suffered Feb. 27 against Eastern Washington.

Idaho quarterback Mike Beaudry flips the ball to a receiver during a Feb. 27 Big Sky Conference game against Eastern Washington at the Kibbie Dome.

Idaho receiver Jermaine Jackson (center) is questionable for today’s game against UC Davis because of an injury he suffered Feb. 27 against Eastern Washington.

“It’s not, ‘Oh, I hope we can win,’” said fourth-year coach Dan Hawkins, who in 2018 led his alma mater to a Football Championship Subdivision playoff win against Northern Iowa before the Aggies fell to eventual runner-up Eastern Washington.

UC Davis has produced a couple of the better FCS talents of the past few seasons under the wily Hawkins, the classification’s coach of the year in 2018 who’s most responsible for flipping the program’s outlook.

In Year 2 with Hawkins in charge, the Aggies claimed a share of the Big Sky championship, and finished as a top-10 team.

Last season, UC Davis stumbled to a surprising 5-7 mark, failing to recreate the offensive fireworks of 2018, during which it scored 42 points per game.

The Aggies also played a daunting schedule — featuring the likes of No. 1 North Dakota State and three top-10 conference opponents — but Hawkins said the 2019 group still had the abilities of a playoff contender.

As does this one.

“I didn’t do a very good job coaching. That’s what it came down to,” he said. “I like our guys. I like our talent and our culture. We have a ton of potential ... but at some point, we’ll have to achieve.”

The same thing could be said about the 19th-ranked Idaho Vandals (1-0), who at noon today will entertain UC Davis in Big Sky action in the Kibbie Dome.

The subject of “potential” has been a talking point since UI rejoined the league in 2018, but translating talent into achievements thus far has been an unsuccessful venture for the Vandals, who went a combined 9-14 in two disappointing seasons to open their second stay in the BSC.

The expectations have grown as well for UI, particularly after its fairly complete 28-21 Week 1 defeat of then-No. 12 Eastern Washington, in which the Vandals bottled up All-American quarterback Eric Barriere and got some late dazzle from their offense.

Idaho, ranked for the first time since 1995, can boost its spring playoff resume with a victory against an Aggies team that many predict to be the Vandals’ second-toughest foe of this six-game schedule.

“We can’t get comfortable, ranked or not. There’s a lot of things we need to improve on — we did enough (last) weekend to get a win, and we need to continue to take steps forward,” safety Jaxon Woodward said. “We can’t be complacent.”

The Aggies open their season vs. the Vandals — COVID-19 issues within Cal Poly’s program forced last week’s UC Davis/Mustangs game to be postponed.

Rodrigues is the only one with experience. In six appearances as Maier’s backup the past two seasons, he completed 12 of 21 passes for 126 yards.

“You’ll probably see a few play,” Hawkins said. “The good news is I think we have several guys that can play.”

But UI seems most concerned with Gilliam, a versatile weapon in UC Davis’ up-tempo, no-huddle offense who’s as dangerous running the ball as he is catching it. Gilliam played every offensive snap in two contests last season.

“He’s probably one of the best running backs in the conference the last couple years,” Idaho coach Paul Petrino said. “He can really change direction. ... He’s special. He’s as good a player as there is in this conference.”

Added Woodward: “Their running back is a stud, but I think one of our best traits is run-stopping. We’ve got an awesome front seven, I think one of the best in the nation.”

On offense, Idaho will seek to get its ground game going after being limited to 70 yards by EWU. Transfer quarterback Mike Beaudry will be making his second start behind a rebuilt offensive line that might be without its starting center. Receiver Jermaine Jackson also is questionable with an injury.

It’s hard to know what to expect from a UC Davis defense that welcomed a new coordinator from Oregon in Matt Coombs. If Coombs’ time with the Ducks is any indication, the Aggies primarily will field a 3-3-5 scheme, with their front set apart by its speed and disguised blitz packages.

“We had a new quarterback and two freshman offensive linemen playing, so a lot of times that dictates what you can and can’t do,” Petrino said.

“You anticipate a little three-down and four-down. But they’ve got great players. They’ve got a good program, so it’ll be a great battle.”