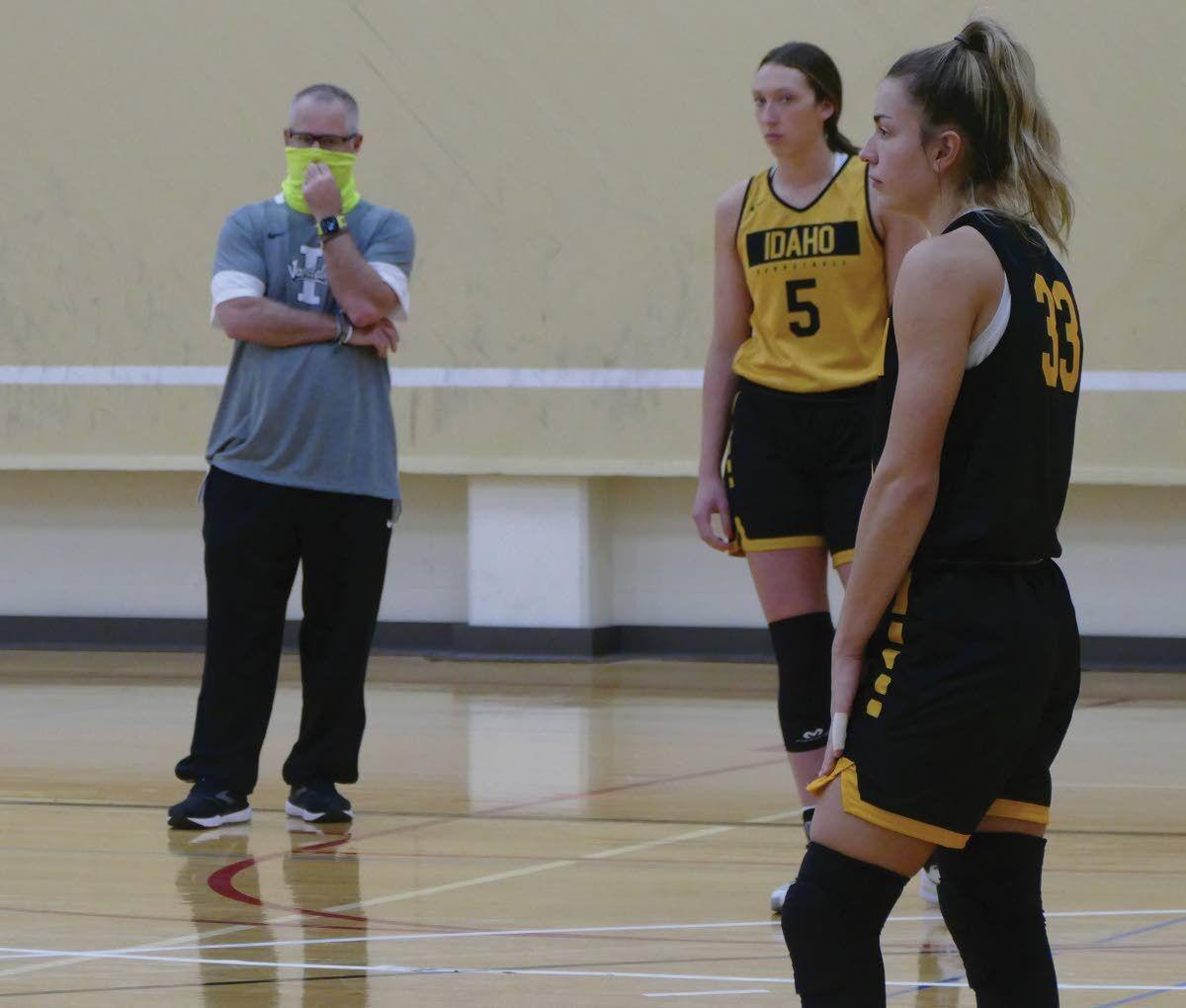 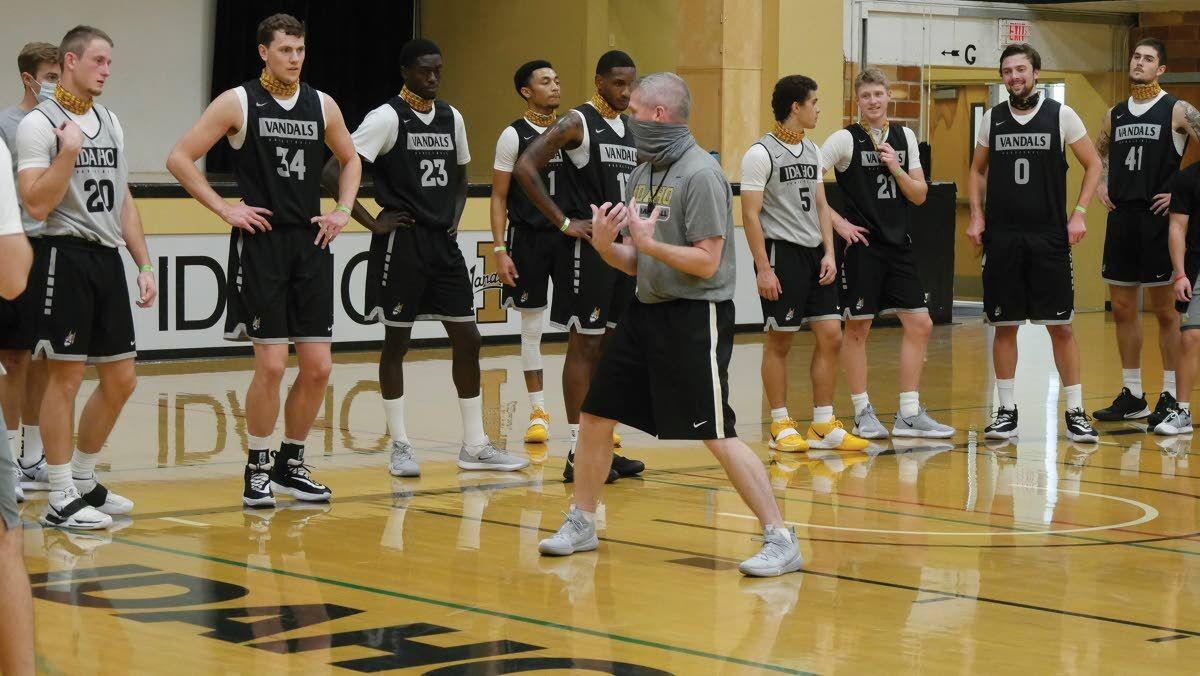 Idaho men’s basketball coach Zac Claus (center) gives instructions during a practice Wednesday. The Vandals will have to replace top scorer Trevon Allen from a team that finished 8-24 a season ago.

Idaho men’s basketball coach Zac Claus (center) gives instructions during a practice Wednesday. The Vandals will have to replace top scorer Trevon Allen from a team that finished 8-24 a season ago.

MOSCOW — The feeling of returning to the basketball court is a little more special this season for the Idaho men’s and women’s basketball teams.

After a sudden end to the season in the spring, which cut the UI women’s season one game short of the Big Sky Conference title, and a tumultuous offseason amid the coronavirus pandemic, the Vandals are back on the court. The UI men began official practice Friday and the women started Wednesday.

“There’s a lot in the ol’ mixing bowl right now that we’re fighting through,” women’s coach Jon Newlee said Wednesday in a Zoom interview. Media are not permitted to attend practice. “... Now, we’re just excited to get on the floor all together and get after it.”

Schedules are yet to be released, but Newlee said conference games could begin as soon as early December. The official start of the NCAA season is Nov. 25, and the Big Sky will have two regular-season league games in the same location each week to reduce travel.

The Vandals also will play all their home games this season in Memorial Gym instead of Cowan Spectrum.

“We’re so happy to have the opportunity to play, you could tell us we’re going to go down and play outside on campus here and we’d sign up for it,” men’s coach Zac Claus said.

The rebuilding Vandal men are coming off an 8-24 season and must replace leading scorer Trevon Allen, who is playing professionally in Poland. Allen’s 21.6 points points per game will be tough to replace and likely will take multiple players stepping into increased roles this year.

With five newcomers and three others who have yet to see the court, leaders like Blakney and Thacker are tasked with bringing everyone up to speed.

“The seniors have been fabulous this whole time,” Claus said. “They were great this summer in terms of interacting with the incoming guys, and now that we’ve had the ability to get going with workouts, they’ve been awesome.”

The Vandal women, meanwhile, might be deeper than they were during a 22-9 campaign a year ago. Idaho was set to play Montana State in the Big Sky tournament championship game in March when the season was canceled because of COVID-19 concerns.

The sting of that loss lingered for much of the offseason, Newlee said.

“It hurt for a long time,” he said. “... When we met for the first time as a group this year, I talked to them via Zoom and it was brutal. We really thought we were going to win that game and go to the NCAA tournament.

“(But) just like if you go to the NCAA tournament the year before, the next year nothing is given to you. You’ve got to work just as hard and start from scratch, and that’s kind of the attitude that we’ve taken with the team.”

As the teams get to work preparing for the season, Claus and Newlee emphasized the importance of planning for unknowns. A COVID-19 breakout could mean missing multiple players, or games.

Newlee said players have been tested once per week since they returned to campus, which will increase to three times per week going forward.

Newlee said he’d like to see uniform coronavirus protocols throughout the conference and the country. He said he’s been talking to other universities about proposals to the NCAA to reconsider the 14-day quarantine requirement for a team with positive cases “’cause I just don’t know how you’re supposed to have a season if somebody gets (COVID-19) and everybody is out for 14 days, even if they haven’t had close contact or anything like that. I think that needs to be addressed.”

Claus said he’s coming up with plans just in case multiple players will have to miss playing time because of quarantine.

“It’s having to wonder in the back of your mind in terms of if something happens to two or three or four guys, how we have to adjust,” Claus said.

For now, both teams are underway like a normal October. The focus is on basketball, as much as it can be.

“It’s the new normal,” Newlee said. “I tell them: You just gotta focus on what we do when we’re all together … When you’re at practice, focus on practice and don’t let the outside noise drive you crazy.”