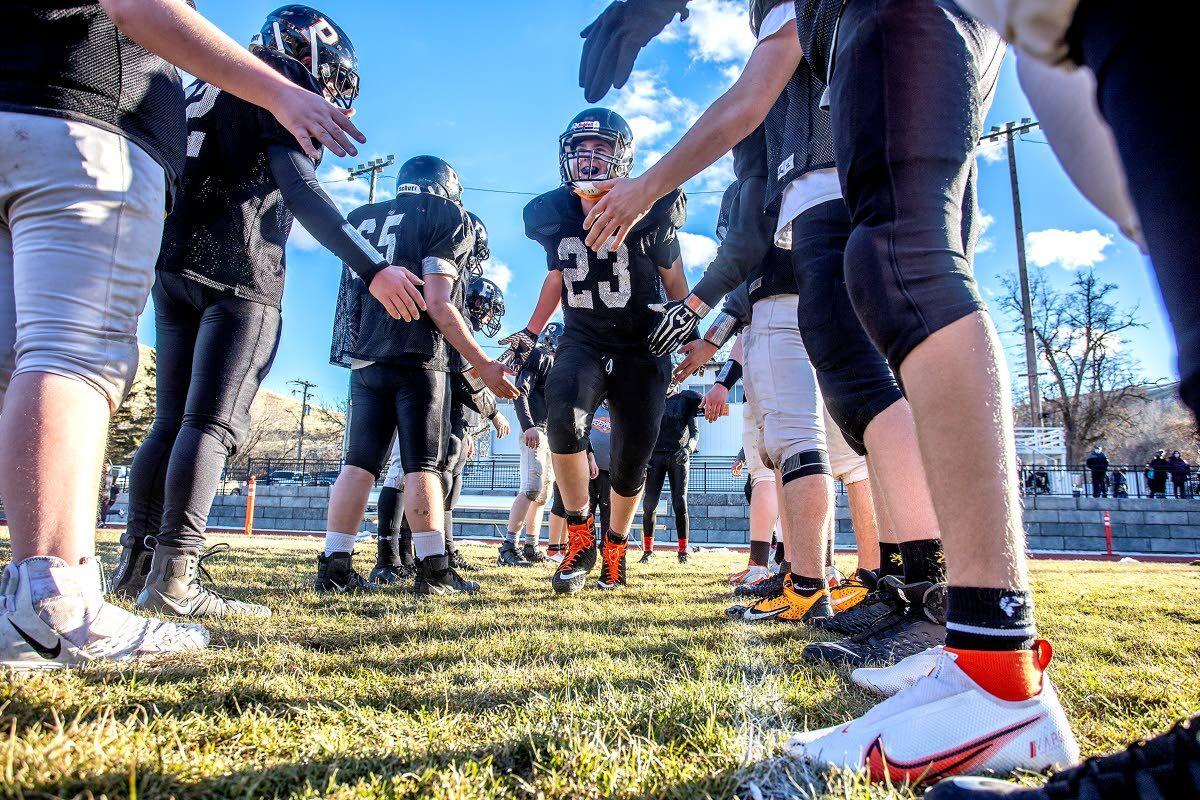 Pomeroy’s Trevon Kimbel gets fives from his teammates before Wednesday’s practice. The Pirates opened their season Friday with a victory. 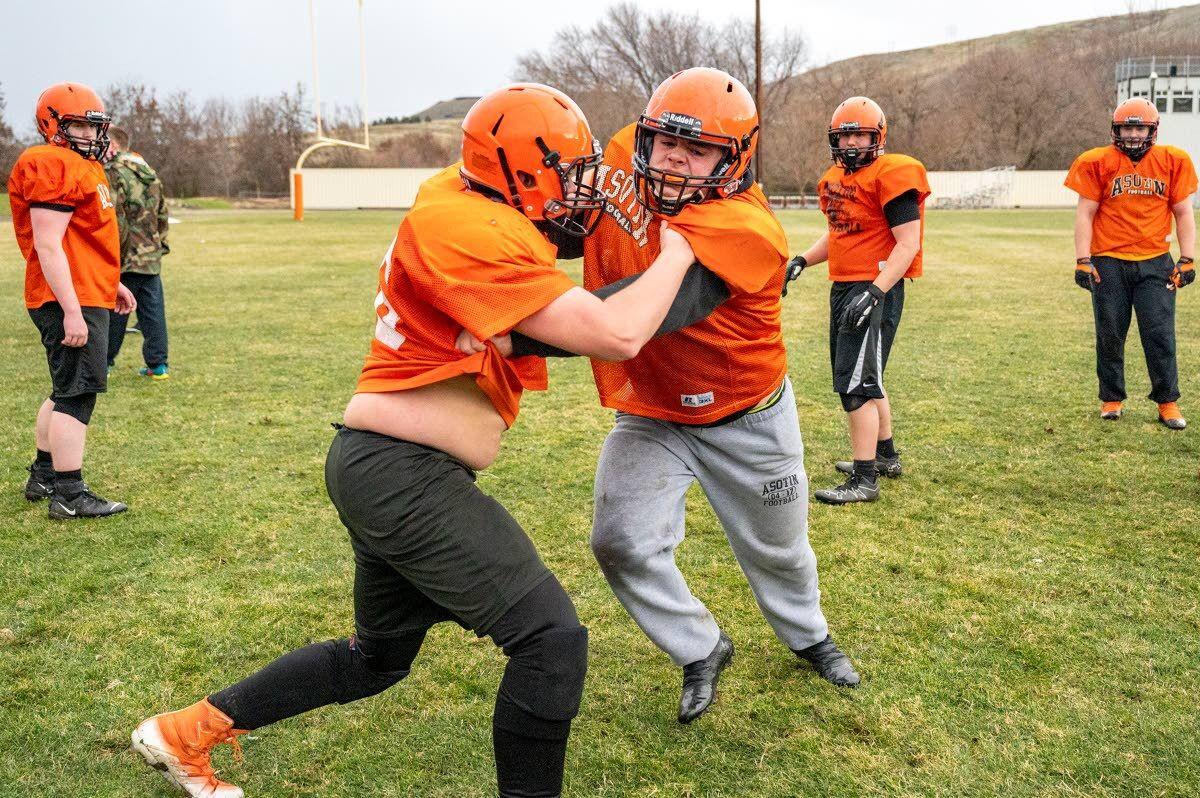 Asotin offensive linemen work with defensive linemen on blocking techniques during Tuesday’s practice. The Panthers open the season at 7 p.m. Friday at home against Davenport.

Pomeroy’s Trevon Kimbel gets fives from his teammates before Wednesday’s practice. The Pirates opened their season Friday with a victory.

Asotin offensive linemen work with defensive linemen on blocking techniques during Tuesday’s practice. The Panthers open the season at 7 p.m. Friday at home against Davenport.

After months sitting idle watching their counterparts in Idaho see action, three area small-school Washington football teams are hungry for their own turn on the field in this modified season.

The Pomeroy Pirates’ Northeast/Southeast 1B League already began with a 34-24 home victory Friday against Wilbur-Creston, and will continue at 5 p.m. today as they host Wellpinit. Their 2B neighbors Colfax and Asotin each make season debuts this Friday, as the Bulldogs travel to face Liberty of Spangle while the Panthers tackle Davenport at Asotin.

This year’s schedule will see all three teams play league rivals exclusively through five-game regular seasons and single-game postseasons in which they face opponents who finished adjacent to them in regular-season standings. There will be no regional crossovers or state playoffs in Washington.

In its opener, Pomeroy trailed 16-6 through just under two full quarters of play, but had the final touchdown of the first half and added a 12-0 run in the third quarter to achieve its winning advantage. Quarterback Trent Gwinn, who at the start of his junior year already has established himself as the second-highest scorer in school history, ran for three of the Pirates’ five total touchdowns and threw to sophomore Trevin Kimble for a fourth.

This week’s game against the visiting Redskins are an unfamiliar foe made part of the Pirates’ league through redistricting for this unique season. They fell 98-0 against Odessa in their opener last week.

“I just want our boys to have a really good experience in the spring playing football,” Pomeroy coach Kyle Kimble said. “They’ve had a lot of things thrown at them in the last year, and to get back to a little bit of normalcy. ... Just that whole little slice of normal that they’re able to get has been really, really fun to watch.”

Colfax held a preseason jamboree Saturday to help “shake off the rust” from going 15 months without game play, as coach Mike Morgan put it. The Bulldogs defeated Liberty 33-20 during their 2019 campaign and took first in 2B Bi-County league standings; they will be playing to repeat both feats starting at 7 p.m. Friday at Spangle.

“We lost a really good senior class, but we had a really solid junior class right behind them,” Morgan said.

Returning all-leaguers like quarterback Layne Gingerich and running back Jacob Brown (who has signed a letter of intent to play for College of Idaho this fall) headline the Colfax roster, which numbers 33 players in all for what Morgan calls a “typical” turnout. As a team, the Bulldogs are fairly balanced with a slight preference for the run game relative to the passing game.

“I do understand that you have to throw the ball,” Morgan said. “It’s fun — the kids like it — but I don’t know if you can throw the ball 60 times a game. That would go against everything I believe in, so we’re still going to play pretty run-heavy ball. We’ve had some success here, and I hope to continue that.”

Asotin, which will travel to Colfax next week for an area showdown, also kicks off at 7 p.m. Friday for its game against Davenport.

“Preparation’s been good,” Panthers coach Jim Holman said. “It’s been different, but at the same time, the kids are just excited to be back to playing, so good intensity and lots of smiles for sure.”

Like Morgan, Holman describes his team as a “pretty good mix” with a “bit more run than pass.” Returning leaders include senior running backs Jack Gilmore and Brayden Barnea, while junior Preston Overberg is stepping up as starting quarterback. Asotin finished a close second in league to Colfax in 2019, and will be looking to flip that script.

“I think it’s pretty wide open,” Holman said of the 2B league field. “I think it will definitely be an interesting four or five weeks here.

“Excited for the guys to get a chance to have a season,” he continued, expressing a common sentiment among the coaches. “It’s been a long time since we’ve had a game; you know, we had to kind of sit on the sidelines and watch our peers in Idaho have their season, and so we’re excited for it to be our turn.”