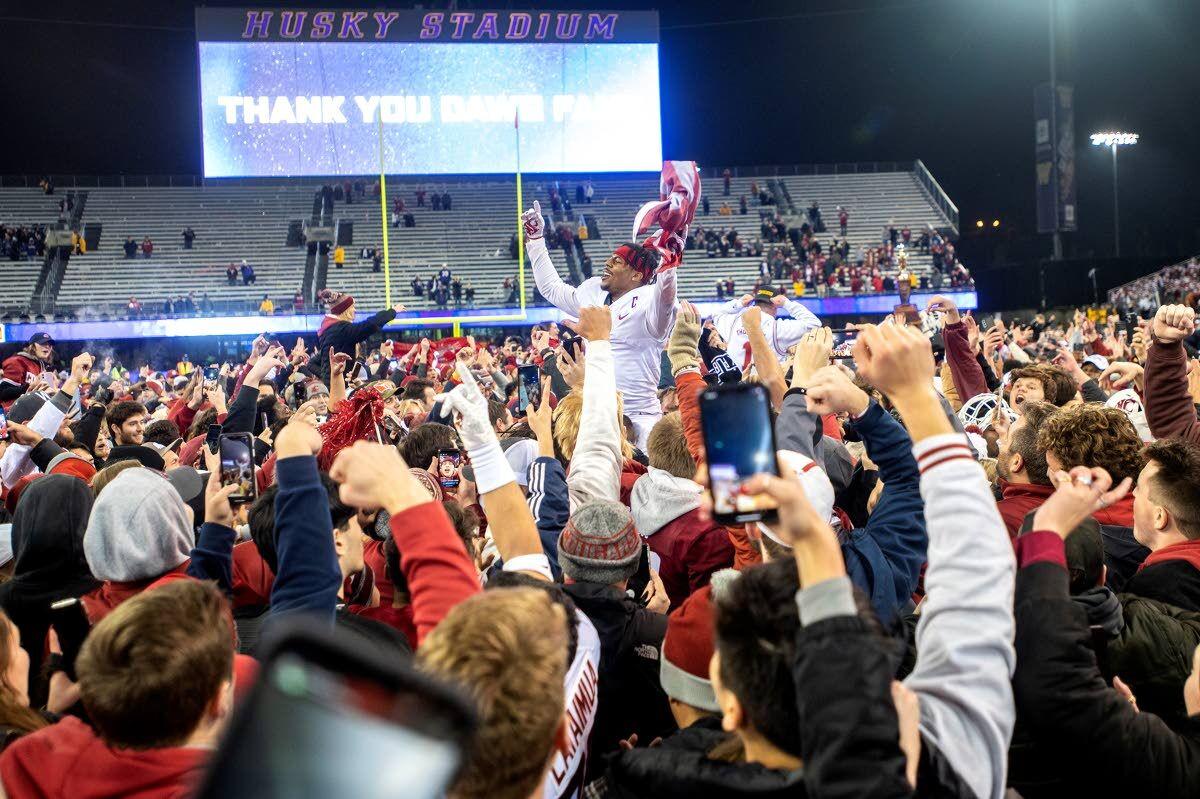 Washington State receiver Travell Harris, center, celebrates with fans after the Cougars beat Washington 40-13 in the 113th edition of the Apple Cup at Husky Stadium in Seattle. 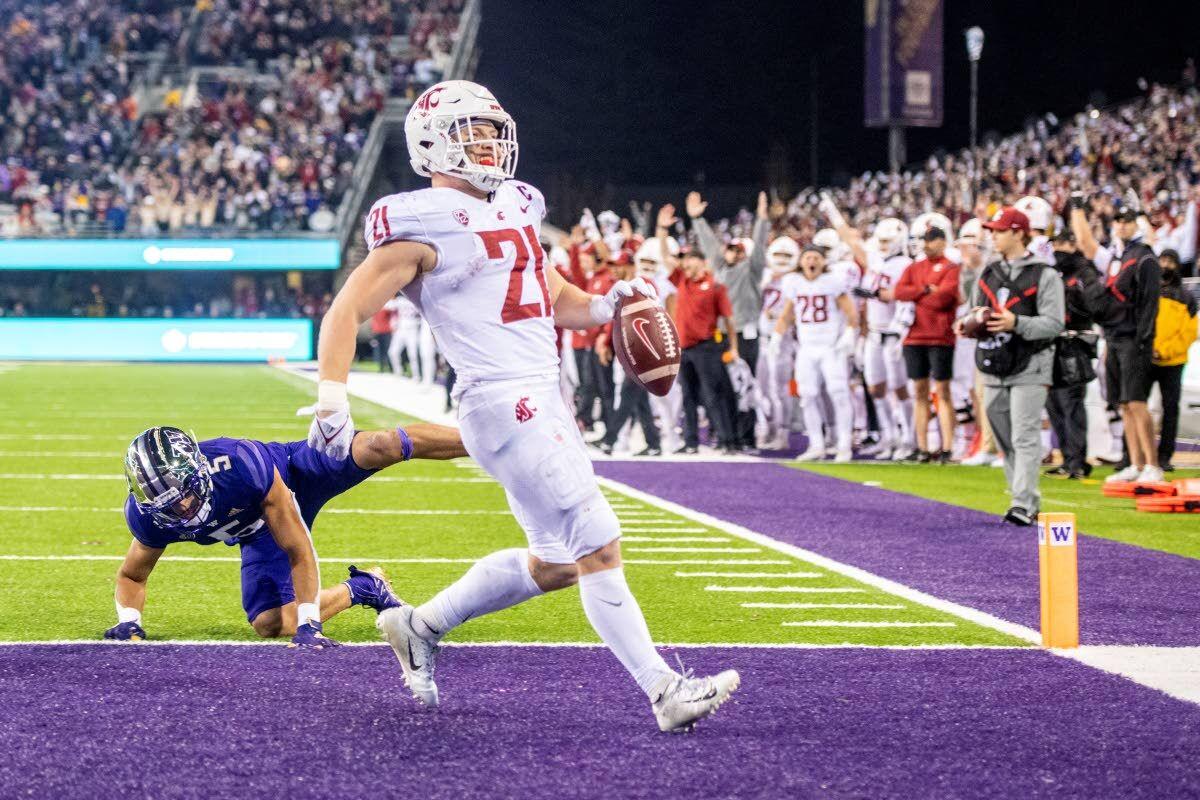 Washington State running back Max Borghi walks in for a touchdown during the third quarter of Friday's Apple Cup game against Washington at Husky Stadium in Seattle. 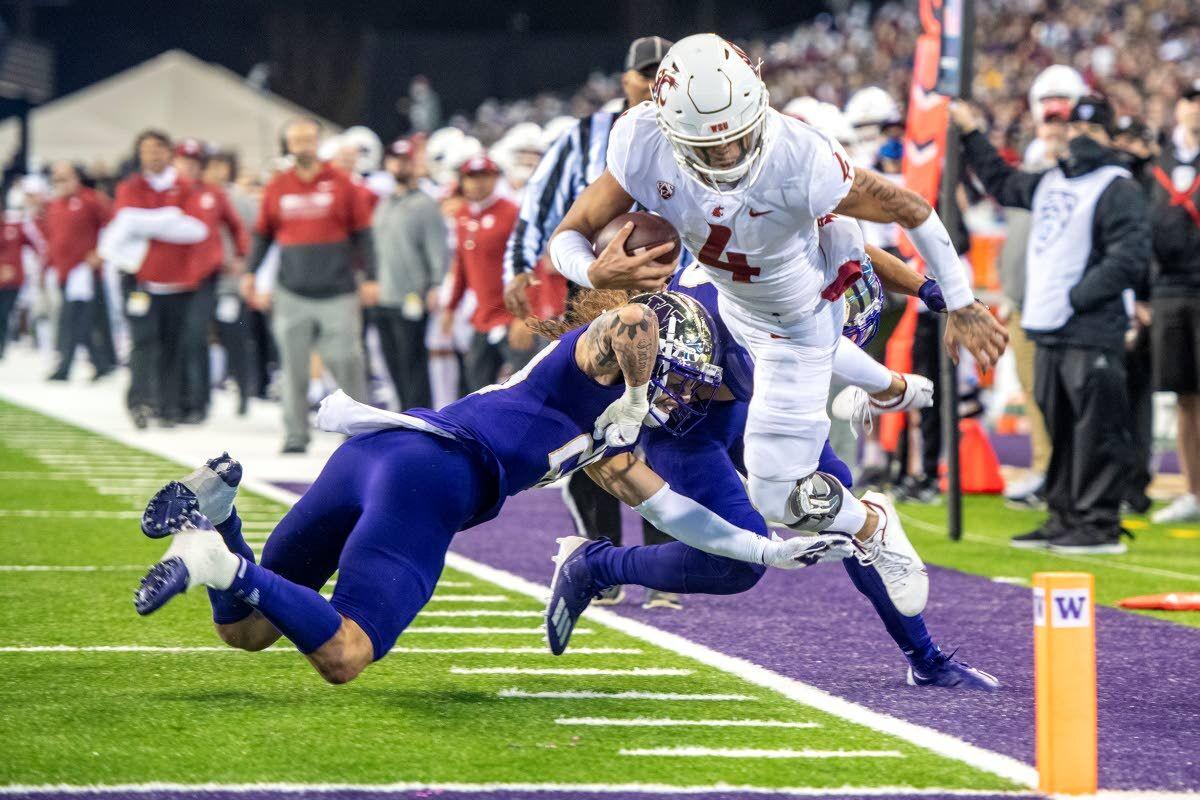 Washington State quarterback Jayden de Laura, top, is tackled by two Washington defenders as he leaps toward the pylon during the third quarter of the 113th Apple Cup on Friday at Husky Stadium in Seattle.

Washington State receiver Travell Harris, center, celebrates with fans after the Cougars beat Washington 40-13 in the 113th edition of the Apple Cup at Husky Stadium in Seattle.

Washington State running back Max Borghi walks in for a touchdown during the third quarter of Friday's Apple Cup game against Washington at Husky Stadium in Seattle.

Washington State quarterback Jayden de Laura, top, is tackled by two Washington defenders as he leaps toward the pylon during the third quarter of the 113th Apple Cup on Friday at Husky Stadium in Seattle.

De Laura missed only once in his first 22 pass attempts and Dickert produced a big selling point in his pursuit of Washington State’s permanent coaching job Friday as the Cougars emphatically ended their seven-game losing streak against arch-rival Washington.

The final score of 40-13 at Husky Stadium marked WSU’s largest winning margin in the 113-year history of the Apple Cup.

The Cougars also stayed alive in their improbable bid for the Pac-12 North championship, which will be theirs if Oregon State upsets Oregon today. Kickoff is at 12:30 p.m. in Eugene, Ore.

“There’s still a lot left out there for us,” said Dickert, the Cougs’ interim coach the past five games. “We’re big Beaver fans going into tomorrow. I’m just excited about what these guys have done. They’ve given me everything they had, and they never flinched.”

The Cougars (7-5, 6-3) scored less than four minutes into the game and led the rest of the way, flipping the script of an intrastate rivalry that had settled into an extended tape loop of Husky dominance beginning in 2013. Wazzu’s average losing margin during that stretch was 21 points.

“Our guys did it,” Dickert said. “We weren’t worried about the past. We were worried about being 1-0. That’s the only thing that we could control, and that’s what we went out and did.”

It was also Wazzu’s first Apple Cup win in Seattle since 2007.

Leading the way was de Laura, who completed 27 of 32 passes for 245 yards, with no interceptions. In a postgame celebration that saw WSU fans storm the field, the sophomore quarterback “planted” the Cougars’ flag on their rival’s field. This was his first Apple Cup, because last year’s version was canceled because of the pandemic.

Dickert, the second-year defensive coordinator who was handed interim reins of the WSU program when Nick Rolovich was fired Oct. 18 for refusing to be vaccinated, improved to 3-2 as head coach and immeasurably enhanced his chances of winning the permanent job, despite being only 38 and never having been a boss before.

In chilly but dry conditions, Max Borghi rushed for 129 yards and two touchdowns as the Cougars outgained Washington 209-10 on the ground, thriving in the trench wars against an opponent that had outrushed them by an average of 212-42 in their seven previous clashes.

“If they’re going to drop eight,” Borghi said of the Huskies’ customary tack in recent Apple Cups, “we’re going to run down their throats, and that’s exactly what we did.”

Armani Marsh intercepted two passes, returning one for a touchdown, and Justus Rogers and Derrick Langford Jr. swiped one each as the Cougs’ predatory defense continuously harassed Sam Huard, a true freshman quarterback who was given his first start by a struggling Husky team (4-8, 3-6) looking for a spark.

“Definitely a little bit of frustration, obviously the past seven years or eight years,” Marsh said. “It hasn’t gone our way, so we’ve been looking forward to this. It’s been a long time coming and it feels good to get a great team W over the Huskies.”

The Cougars weren’t ultra-efficient in the red zone, settling for three Dean Janikowski field goals, but a short Borghi run pushed the WSU lead to 20-7 early in the second half, and Rogers’ 58-yard interception return set up a 2-yard touchdown run by Deon McIntosh that made it 30-7 early in the fourth quarter.

When Marsh tacked on his 38-yard interception return for a score midway through the period, the Cougars became the first UW opponent in 87 games to score at least 35 points.

“I told every young guy on this team,” said Borghi, a senior, “make sure this Cup never comes this way again. It’s ours now.”

JAYDEN DE LAURA passed 27-for-38 for 245 yards, with no interceptions, to lead the Cougars, who also got 129 rushing yards and two touchdowns from MAX BORGHI. Nickelback ARMANI MARSH intercepted two passes, returning one for a touchdown, and JUSTUS ROGERS returned a pick 58 yards.

Leading 13-7 at halftime, the Cougars set the tone for the second half by inducing a Washington three-and-out and driving 78 yards for a touchdown by Borghi, who carried four times on the 10-play drive.

If Oregon State defeats Oregon today, the Cougars win the Pac-12 North title and face Utah in the conference championship game at 5 p.m. Friday at Allegiant Stadium in Las Vegas. If Oregon beats OSU, the Cougars’ next outing will be an undetermined bowl game. Bowl selection day is Dec. 5.

For more photos from the game, click on this link.