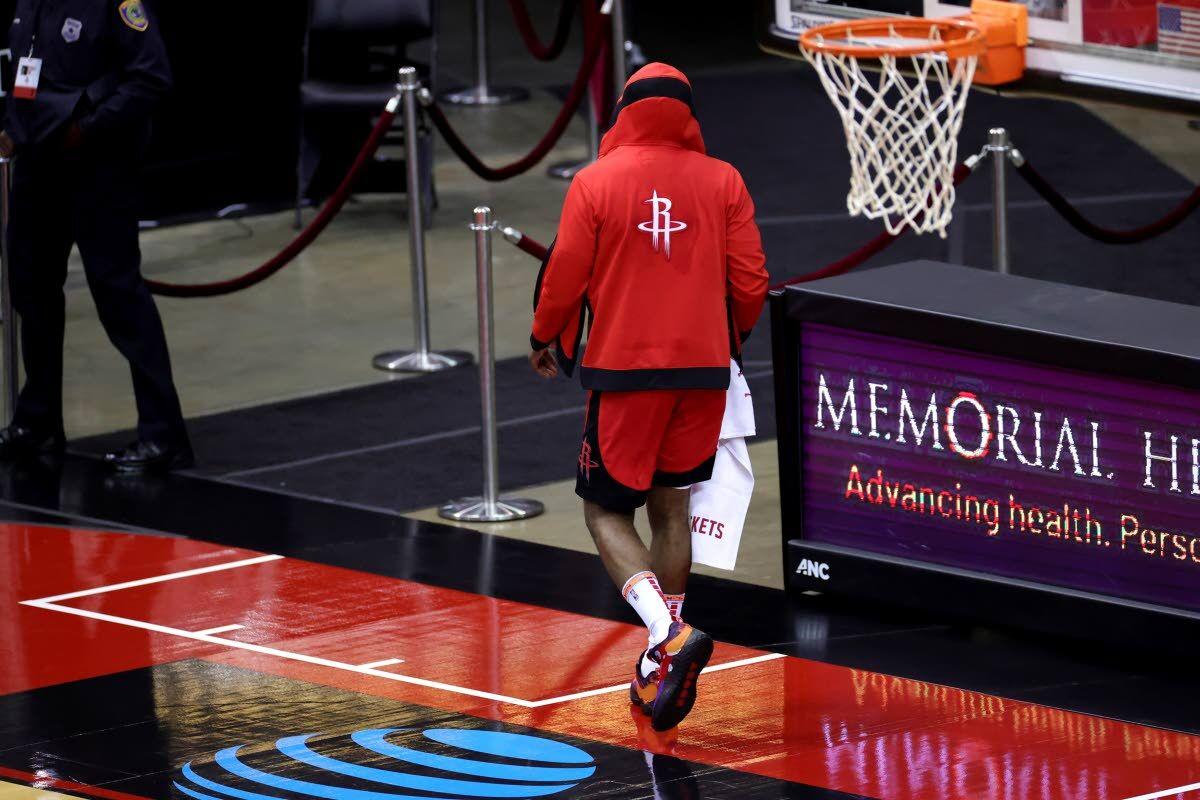 James Harden was traded to the Brooklyn Nets by the Houston Rockets in a deal that sent the disgrunted player to a team that now will have three 20-point-per game scorers. 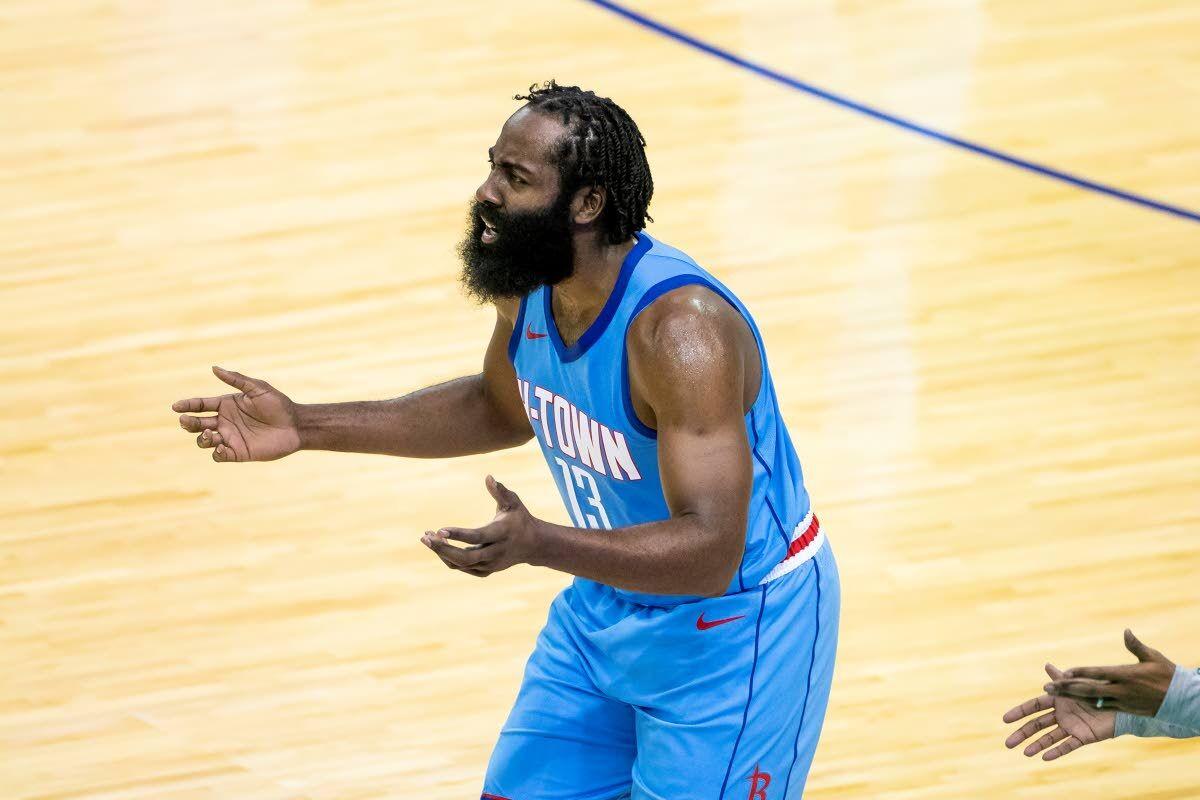 Houston Rockets guard James Harden (13) reacts to a call during the team's NBA basketball game against the Los Angeles Lakers on Tuesday, Jan. 12, 2021, in Houston. (Mark Mulligan/Houston Chronicle via AP) 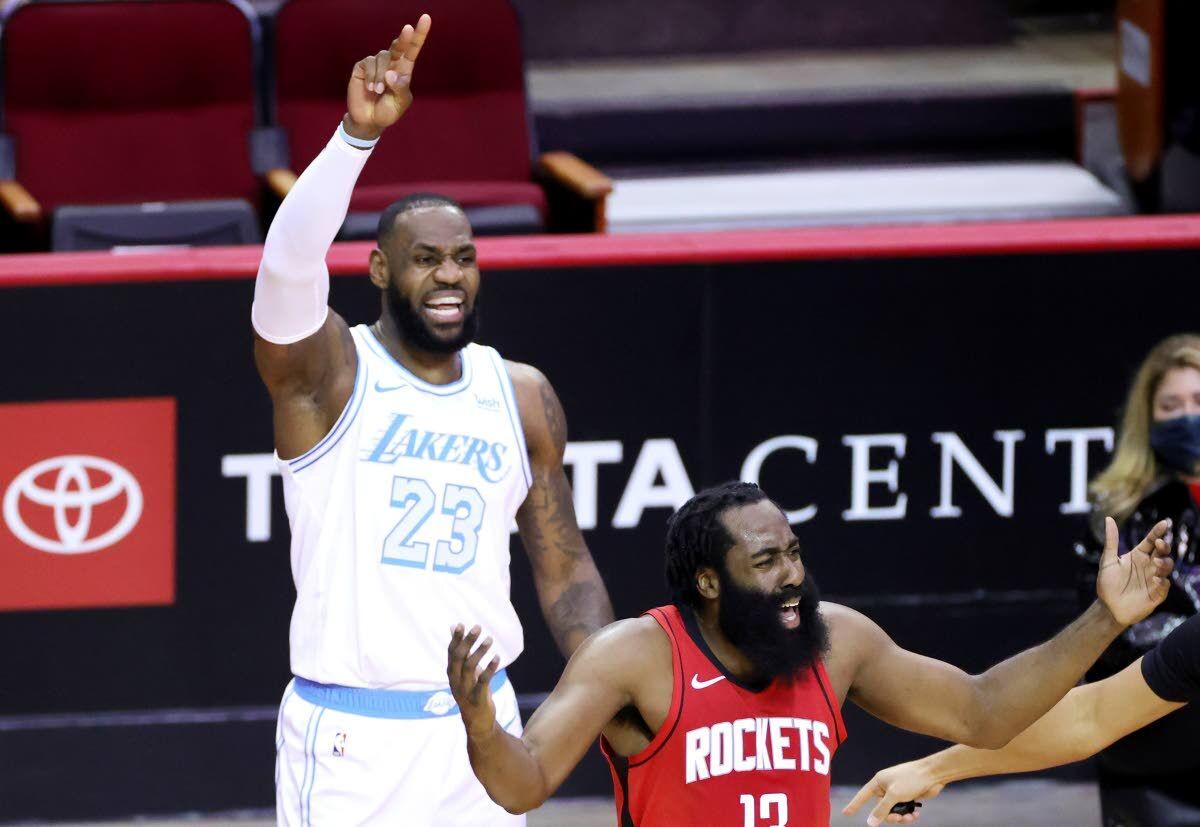 James Harden, right, of the Houston Rockets, reacts to a call ahead of LeBron James, left, of the Los Angeles Lakers during the first quarter of an NBA basketball game Sunday, Jan. 10, 2021, in Houston, Texas. (Carmen Mandato/Pool Photo via AP) 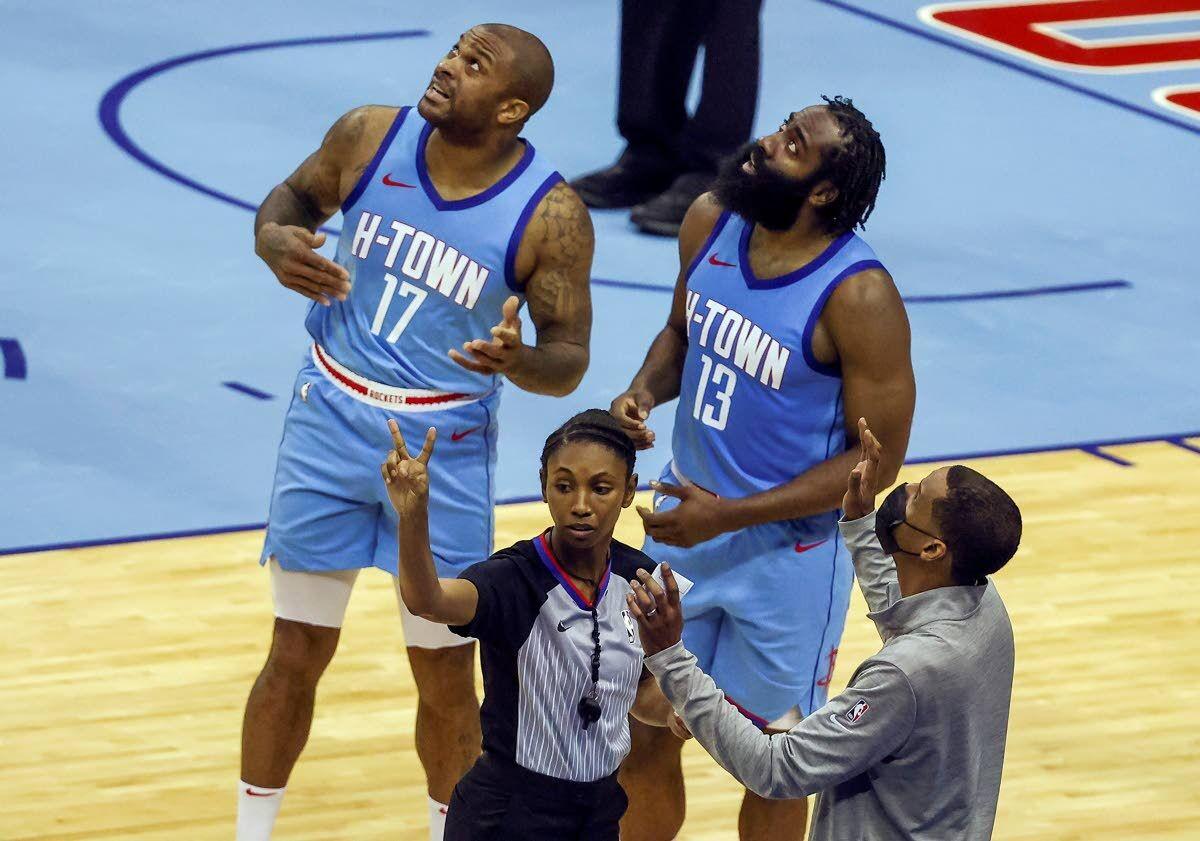 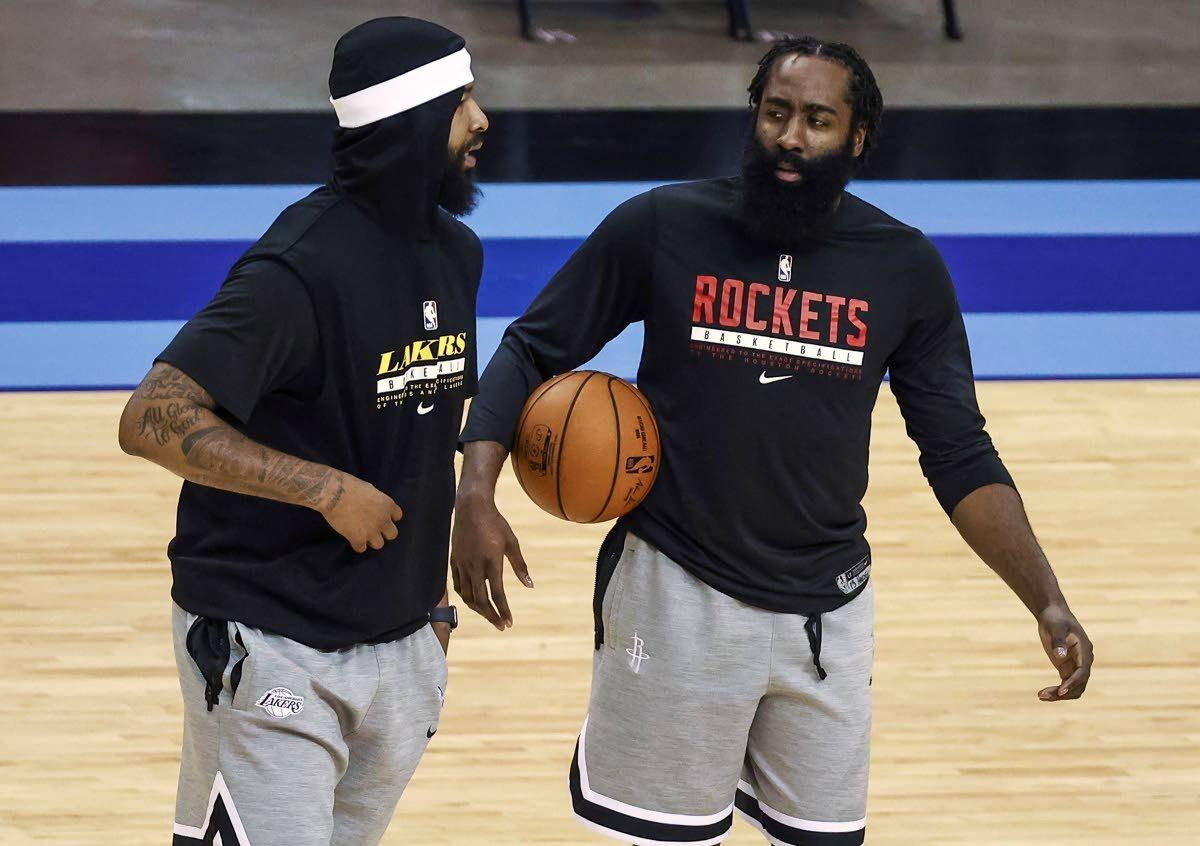 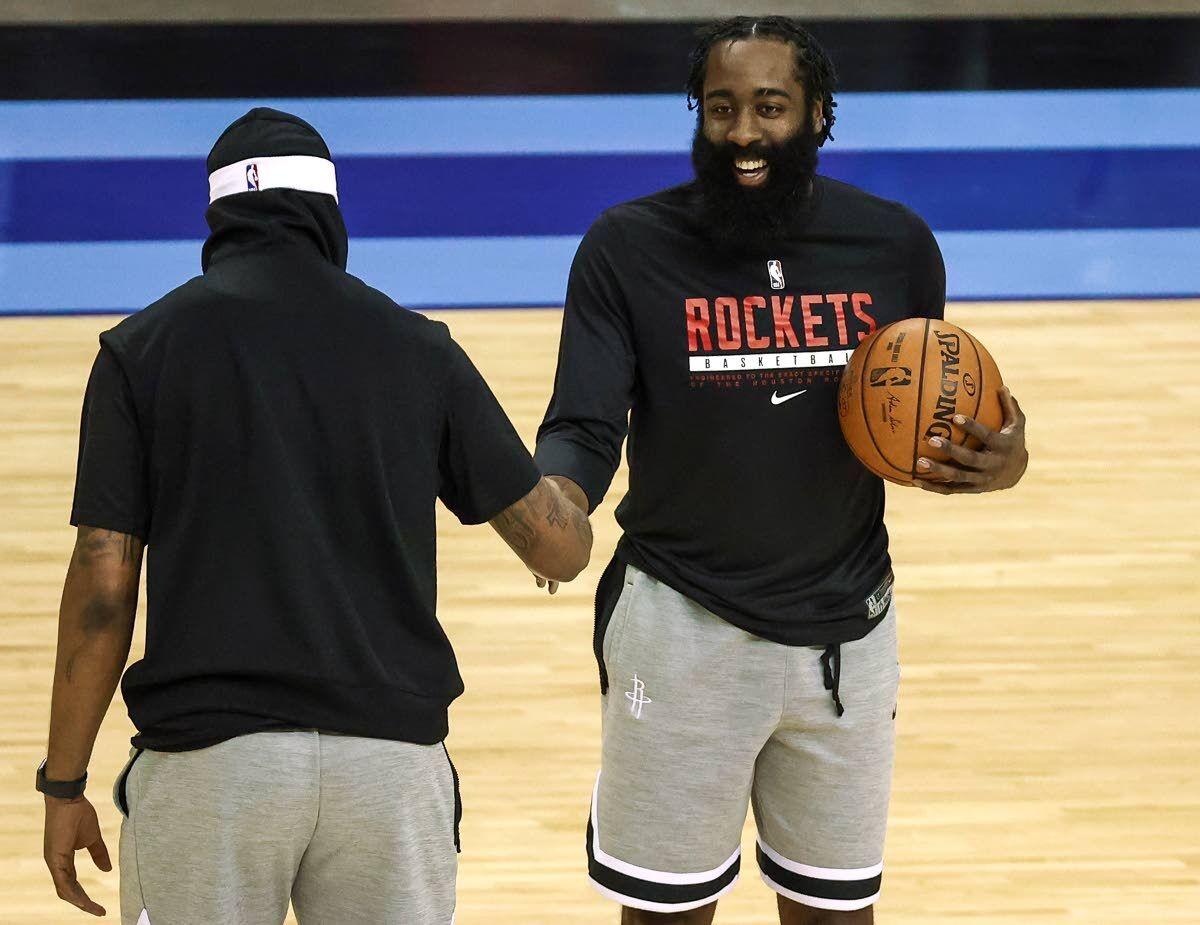 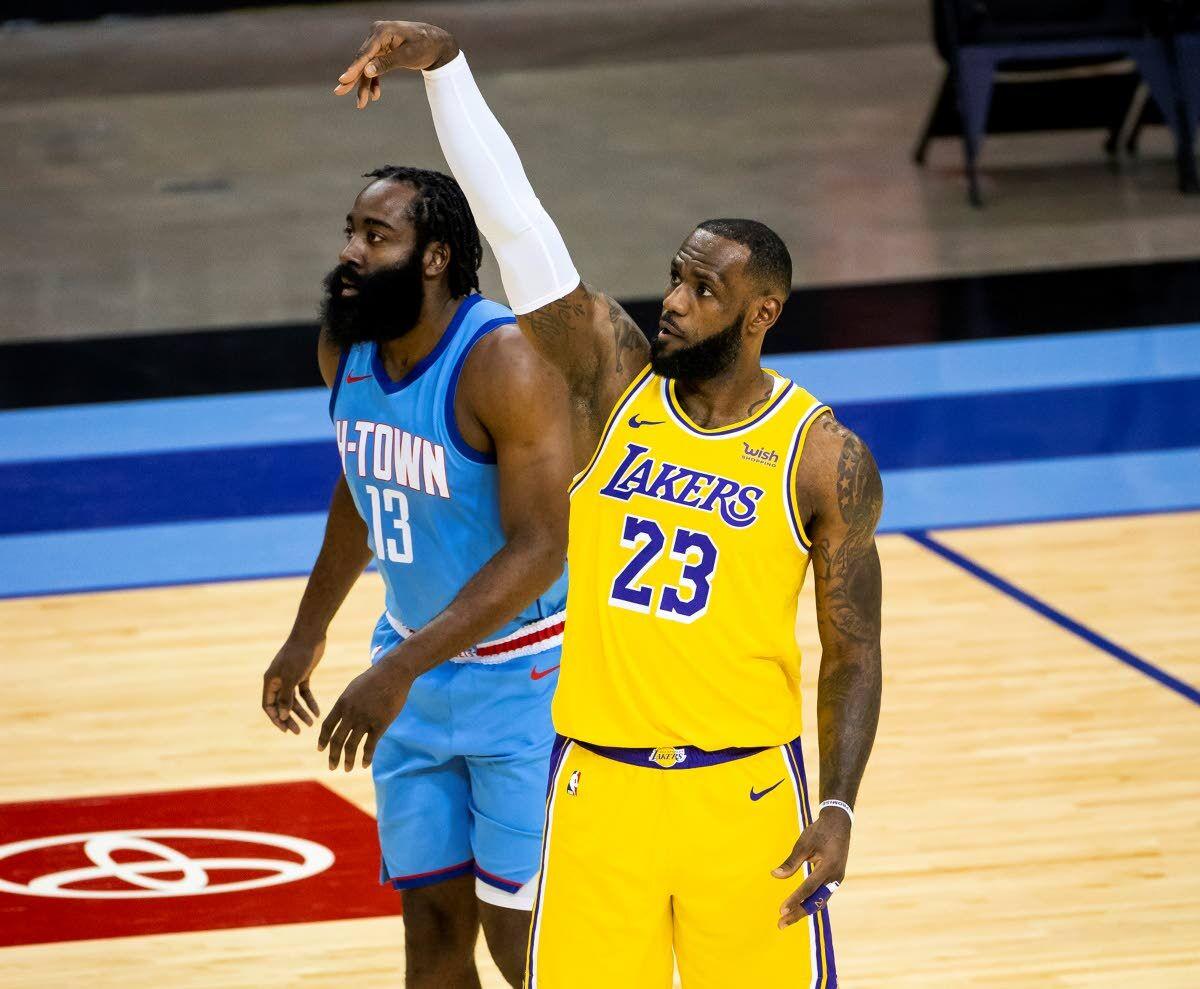 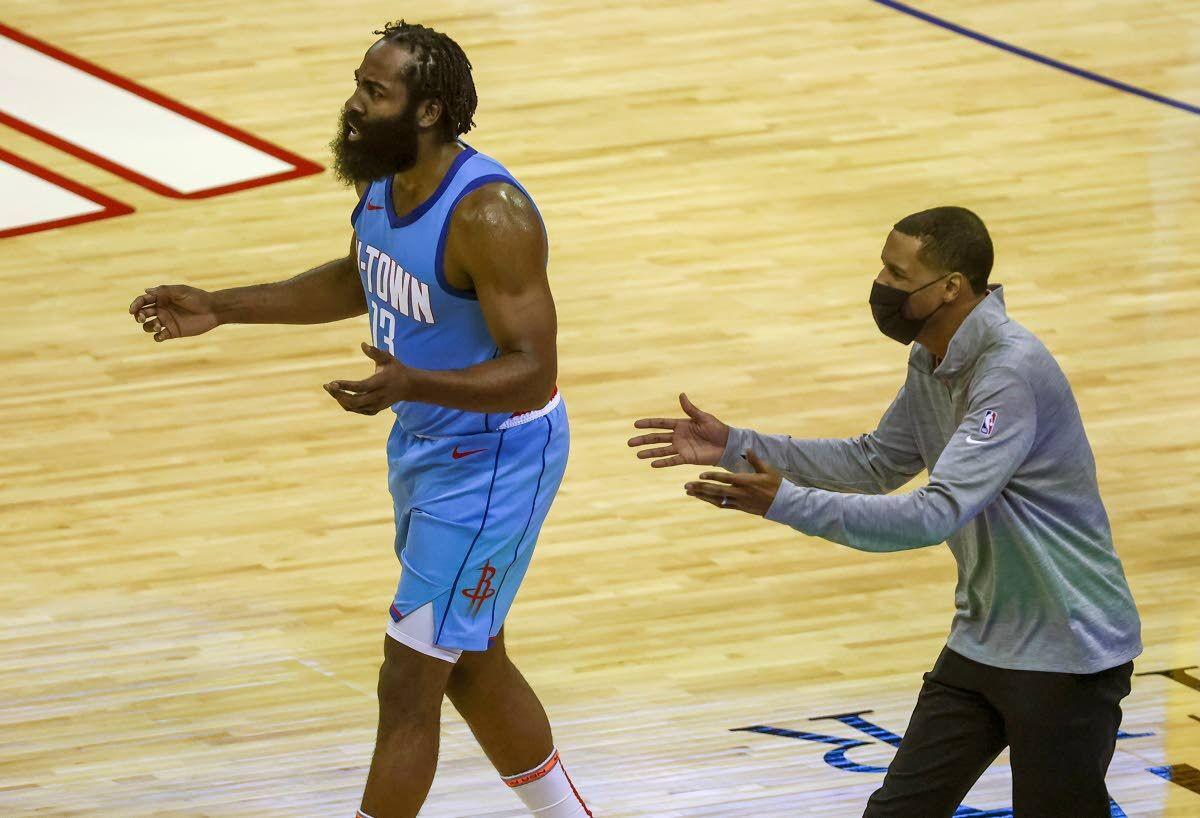 James Harden was traded to the Brooklyn Nets by the Houston Rockets in a deal that sent the disgrunted player to a team that now will have three 20-point-per game scorers.

Houston Rockets guard James Harden (13) reacts to a call during the team's NBA basketball game against the Los Angeles Lakers on Tuesday, Jan. 12, 2021, in Houston. (Mark Mulligan/Houston Chronicle via AP)

James Harden, right, of the Houston Rockets, reacts to a call ahead of LeBron James, left, of the Los Angeles Lakers during the first quarter of an NBA basketball game Sunday, Jan. 10, 2021, in Houston, Texas. (Carmen Mandato/Pool Photo via AP)

James Harden is heading to Brooklyn, joining old teammate Kevin Durant and Kyrie Irving to give the Nets a potent trio of the some of the NBA’s highest scorers.

The Nets agreed to acquire the three-time scoring champion from the Houston Rockets on Wednesday in a move he has sought for weeks, said a person with knowledge of the situation.

Harden is the centerpiece of a four-team deal that also involves Indiana and Cleveland, according to the person who spoke on condition of anonymity because the trade call with the NBA — which signs off on all deals — has not been completed.

Once it is, the Nets will be able to trot out a lineup of three players capable of scoring 25 or more points on any night in a collection of firepower to rival any Big Three in recent years.

They are loading up for a title run with three of the highest-paid players in the league. All are under contract through 2022-23, with Harden and ­Durant each set to earn more than $40 million in each of the next two seasons.

In the meantime, the Nets were short-handed for their game against the New York Knicks, where coach Steve Nash declined to discuss Harden but did confirm the players the Nets were trading were not in the building.

Off to a 6-6 start in his rookie season, now the former point guard and two-time league MVP will have to mold an offense that keeps the ball moving with three players worthy of having it in their hands.

“It’s a simple game but it becomes complicated when you put different personalities and players on the floor,” Nash said. “Our group’s done a really good job being unselfish this year and trying to move the ball and work together so I’ve been proud of that.”

The blockbuster deal provides a needed boost amid a period of drama for both franchises. It was struck less than 24 hours after Harden seemed to deliver a farewell address of sorts after the Rockets’ loss to the Los Angeles Lakers on Tuesday, and just before Irving was set to miss a fifth consecutive game for personal reasons from the Nets.

At least four draft picks and additional pick swaps also are part of the deal, the person said. Other key players: Victor Oladipo goes from Indiana to Houston, and Caris LeVert goes from Brooklyn to Indiana, the person said. The Cavaliers will get Jarrett Allen and Taurean Prince from the Nets in the deal, a person familiar with the trade said.

Harden, who has cycled through Chris Paul and Russell Westbrook as teammates in recent seasons, didn’t think much of the roster the Rockets had around him this season.

“We’re just not good enough ... I love this city. I literally have done everything that I can,” Harden said Tuesday. “I mean, this situation is crazy. It’s something that I don’t think can be fixed.”

It couldn’t, and now he’s gone.

Brooklyn expects Harden to leave all that behind him and that his transition to the Nets is smooth. He should be happier in Brooklyn, having teamed with Durant in Oklahoma City when they were younger and remaining close still.

It was obvious the end was nearing earlier Wednesday, when the Rockets told him they didn’t want him at practice after his inflammatory comments about the team.

“We felt it was best for James and best for the group for him not to come to practice,” first-year coach Stephen Silas said. About two hours later, ESPN and The Athletic first reported Harden was being moved.

The disgruntled superstar, who was unable to get the Rockets past the Western Conference finals, had remained quiet through months of reports that he was unhappy in Houston. Silas called the drama surrounding Harden an “all-around messed up situation.”

The Nets were ready to swoop in, after a shaky defense during the early season proved their best chance to beat teams might be to outscore them.

They can certainly do that now. Durant is averaging 29.9 points in his first season back from surgery to repair a ruptured Achilles tendon, and Irving was scoring 27.1 per game before leaving the team last week. Harden, who appears to be out of shape after joining the Rockets after training camp began, is averaging 24.8 points this season after three consecutive seasons above 30, culminating in MVP honors in 2018.

The Rockets are just 3-6 this season and only Minnesota has a worse record in the Western Conference. The team clearly is in disarray and new arrival John Wall called the situation “rocky.”

Harden won each of the past three scoring titles by notable margins — 2.3 points over Anthony Davis in 2017-18, 8.1 points over Paul George in 2018-19 and 3.8 points over Bradley Beal last season. His average so far this season ranked 18th in the NBA, well off his usual pace.

It could pick back up again in Brooklyn, where Nash’s assistant running the offense is Mike D’Antoni, Harden’s coach during his best seasons in Houston.

D’Antoni didn’t return after last season and it quickly became clear Harden out as well. He was a no-show when camp opened and later was fined $50,000 for conduct detrimental to the league after attending an indoor event without a mask in violation of the NBA’s health and safety protocols.