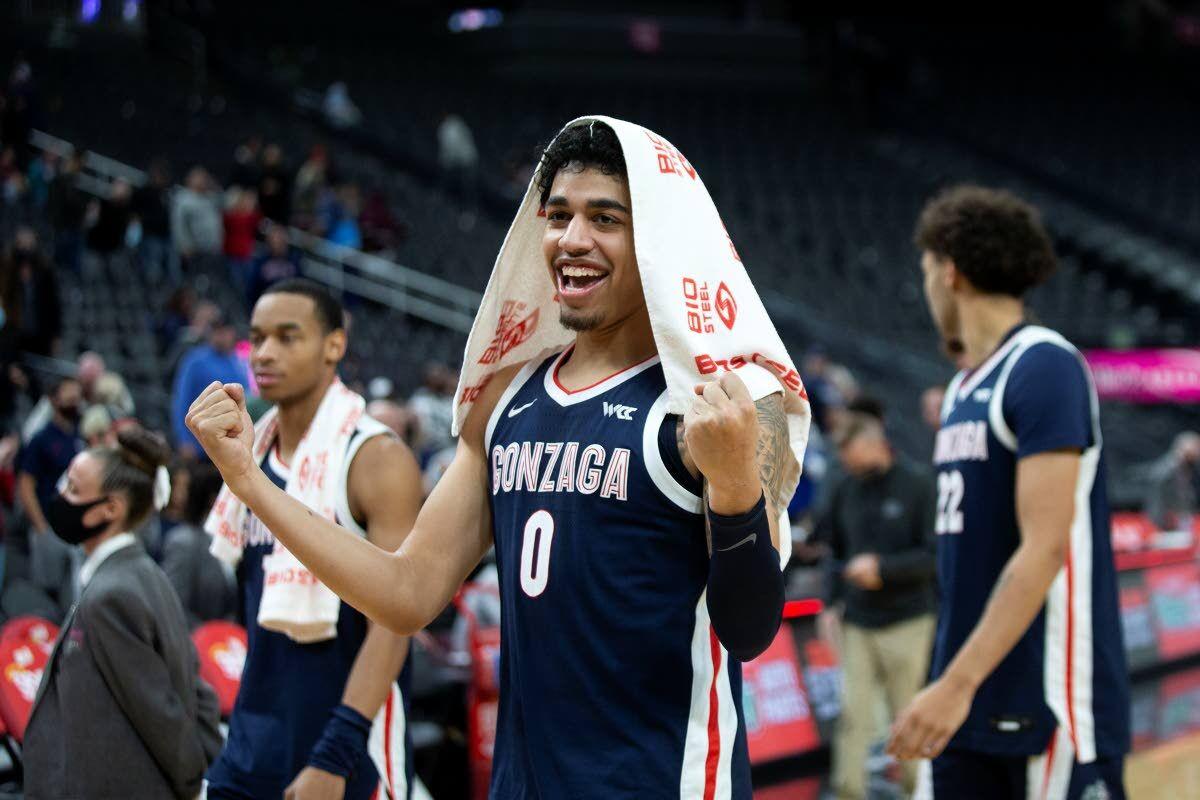 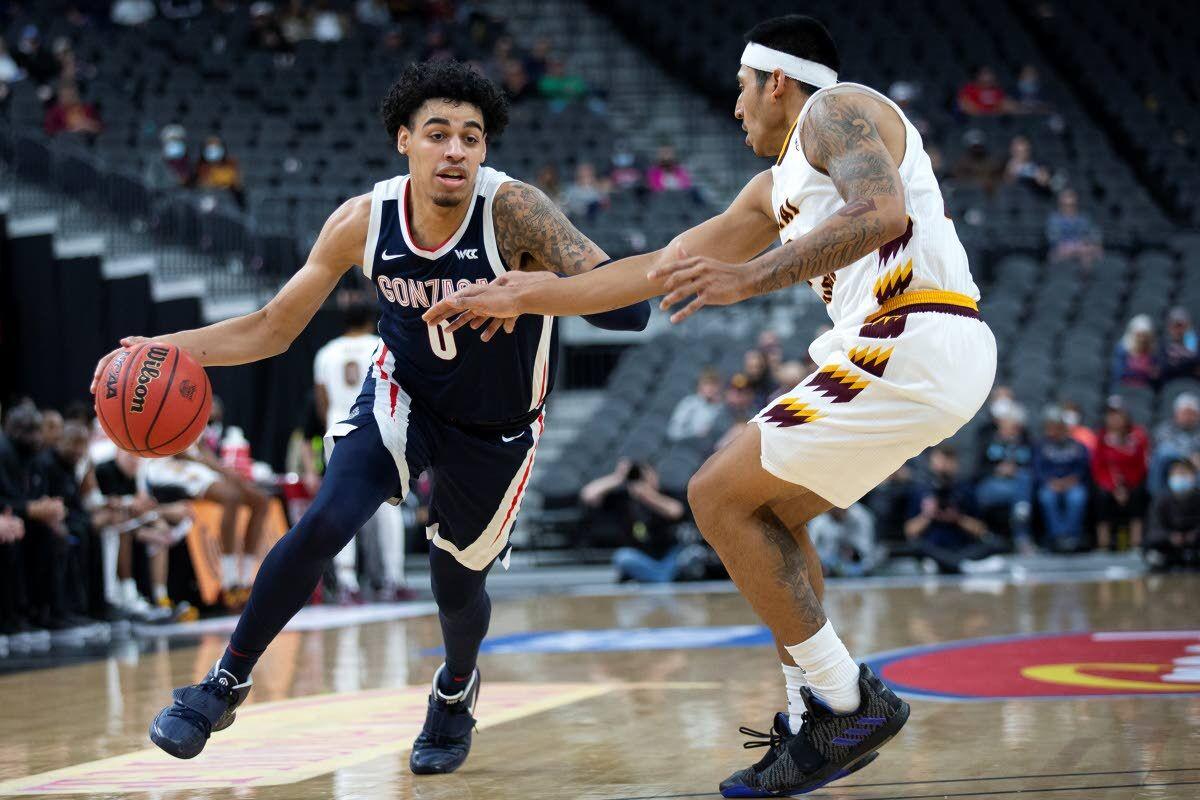 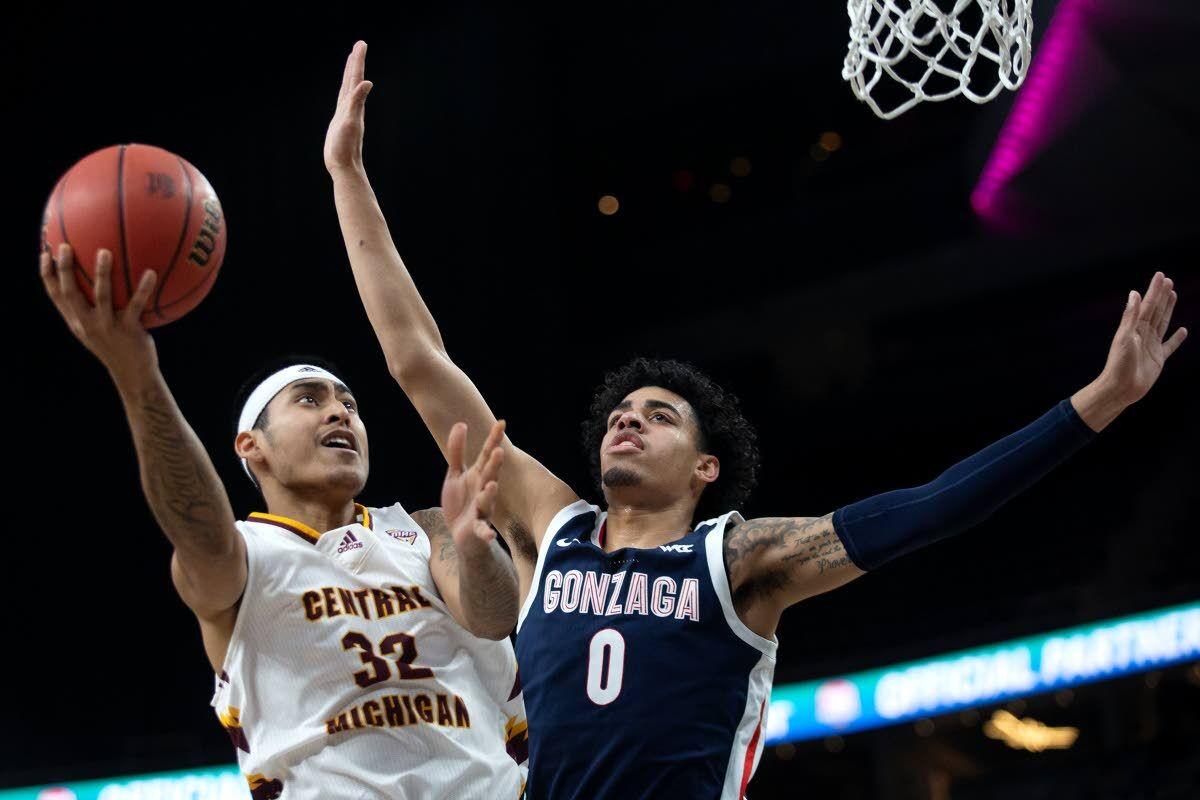 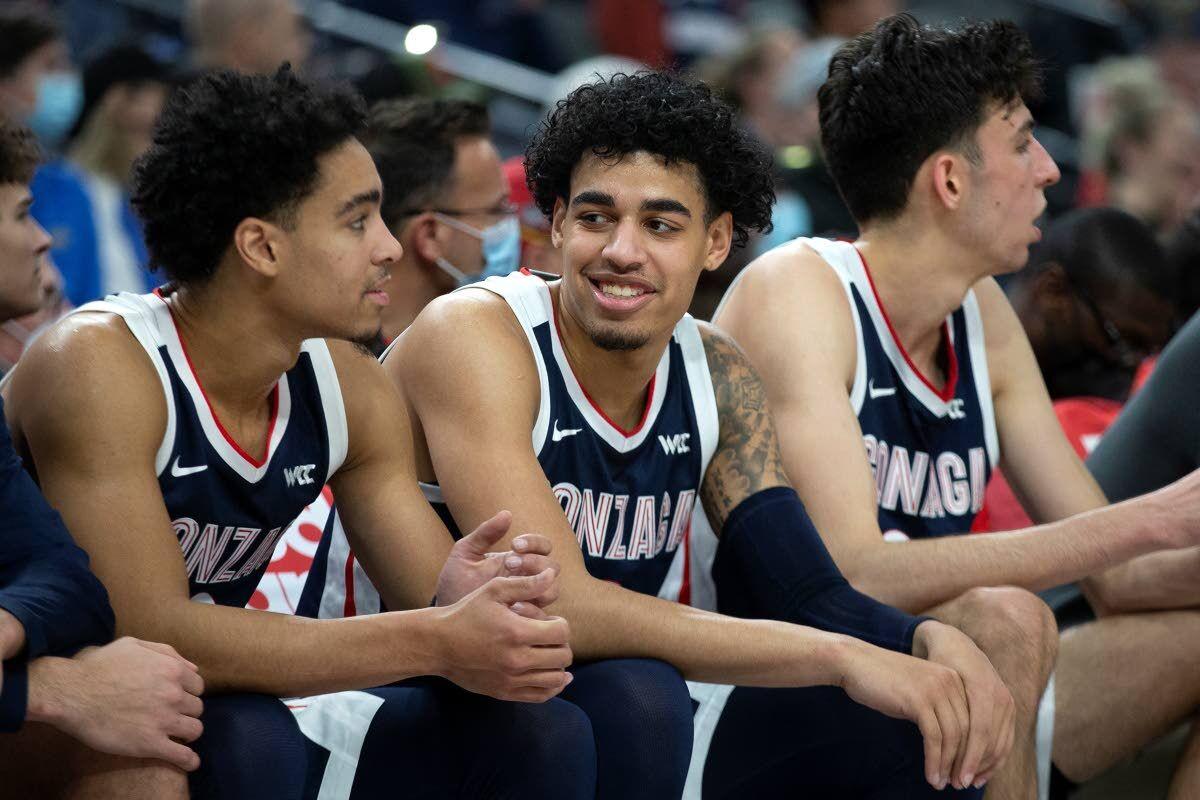 Gonzaga guard Julian Strawther, center, sits on the bench during the first half of the team's NCAA college basketball game against Central Michigan on Monday, Nov. 22, 2021, in Las Vegas. (AP Photo/Ellen Schmidt) 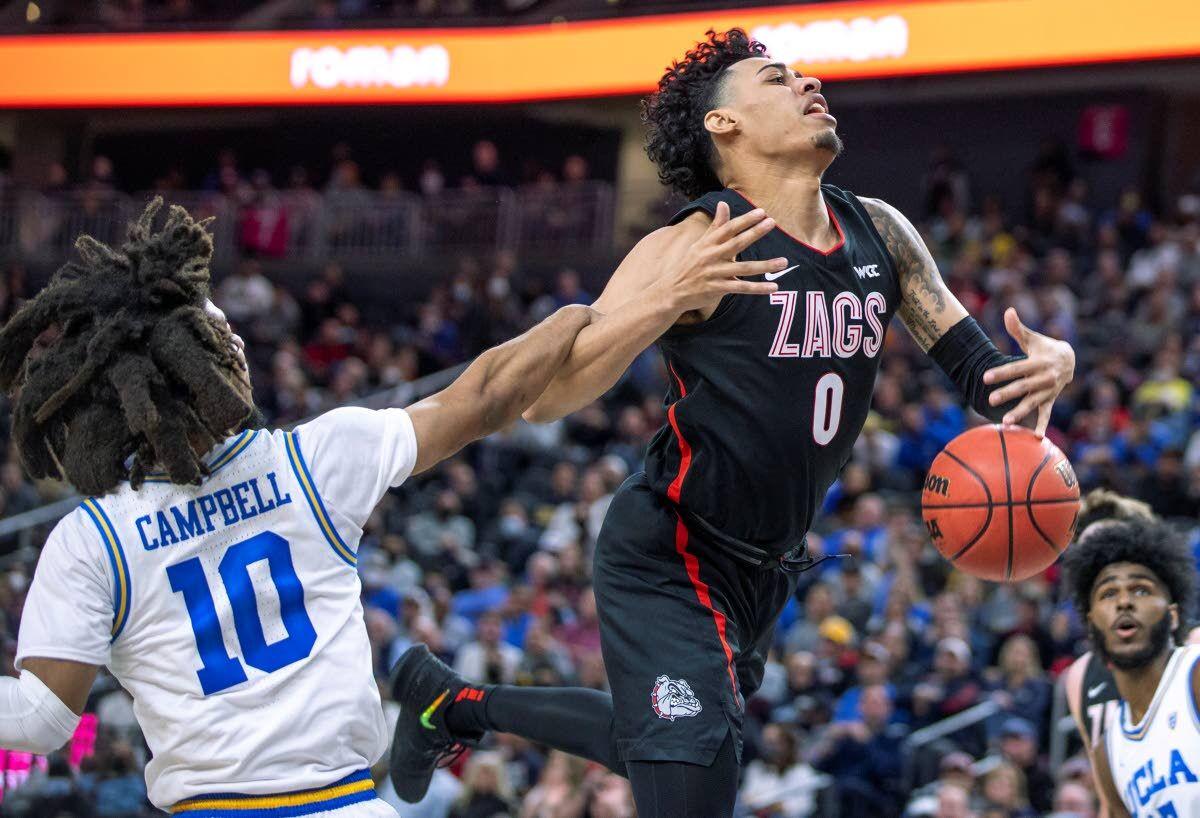 UCLA guard Tyger Campbell (10) fouls Gonzaga guard Julian Strawther (0) on a drive to the basket during the second half of an NCAA college basketball game on Tuesday, Nov. 23, 2021, in Las Vegas. (AP Photo/L.E. Baskow)

Gonzaga guard Julian Strawther, center, sits on the bench during the first half of the team's NCAA college basketball game against Central Michigan on Monday, Nov. 22, 2021, in Las Vegas. (AP Photo/Ellen Schmidt)

UCLA guard Tyger Campbell (10) fouls Gonzaga guard Julian Strawther (0) on a drive to the basket during the second half of an NCAA college basketball game on Tuesday, Nov. 23, 2021, in Las Vegas. (AP Photo/L.E. Baskow)

After playing just seven minutes in last season’s West Coast Conference tournament in his hometown of Las Vegas, which fans were not allowed to attend because of the pandemic, the 6-foot-7 swingman has starred for the Zags in front of enthusiastic crowds.

Moments after top-ranked Gonzaga smashed No. 2 UCLA 83-63 in Tuesday’s championship game of the Empire Classic, dozens of relatives and friends cheered and teared up as the Bulldogs let Strawther hoist the trophy with a grin that shone like the lights of the Las Vegas Strip.

Strawther, a sophomore, averaged 13.5 points, six rebounds and 28 minutes in the two games at T-Mobile Arena.

“It’s been really exciting for all of us to see how far he’s come since last season,” said Strawther’s father, Lee. “He put in an enormous amount of work this past summer to get where he is now. But seeing him in person, at home, as an important piece of the No. 1 team in the country, and watching him grow and thrive, is something I’m sure we’ll never forget.”

Strawther is particularly glad to be with family this week, with one more game to come when the Bulldogs meet No. 5 Duke on Friday. His mother, Lourdes, affectionately known as Cookie, died in 2011 after a battle with breast cancer. While this will be his 10th Thanksgiving without her, the 19-year-old carries the memory of her support.

“She was at my first basketball game and she came to every single one leading up to when she passed away,” said Strawther, who represented his mother’s homeland by playing for Puerto Rico’s 19U team in the 2019 FIBA World Cup. “I know she’s with me still and I know that every time I step on the floor my family is watching and I got something to be proud of.”

Strawther is averaging 14.3 points per game, which ranks second on the Bulldogs, and is third in minutes at 25.5 and rebounds at 5.7. He averaged 7.4 minutes and 3.4 points as a freshman while playing behind Corey Kispert, who’s now with the Washington Wizards.

Strawther, who is shooting 54.7 percent from the floor and 48.3 percent from 3-point range, has increased his career high in scoring four times this season. His best was 19 points on 60 percent shooting in a 92-50 win against Bellarmine.

“It’s been a big game of waiting my turn and making sure I put in the work to make sure that when I did get the opportunity that I didn’t fold and I could make the most of it.”

In the offseason, Strawther traveled back and forth from Las Vegas and Spokane, bulking up and honing in on what coach Mark Few and his staff identified as areas where he needed to improve. The Zags’ coaching staff sees Strawther filling a big role on another stacked roster that’s expected to make a run at what would be the program’s third trip to the national title game.

“He’s been great and he’s kind of what we expected of him, quite frankly,” Few said. “And that’s the same thing that Corey Kispert did. It’s just what you do at Gonzaga, that’s just how it happens and we reward those guys that are patient and actually the game rewards those guys that are patient, that work. That’s what the program is all about. It’s a credit to Julian, the type of person he is.”

The type of person his family can be proud of too. Strawther has a constant reminder of his family’s support, a tattoo on the left side of his chest with a message his mother once wrote on a basketball.

“My beautiful son, Julian. Mommy loves you so very much forever, and ever. Love Mommy.”