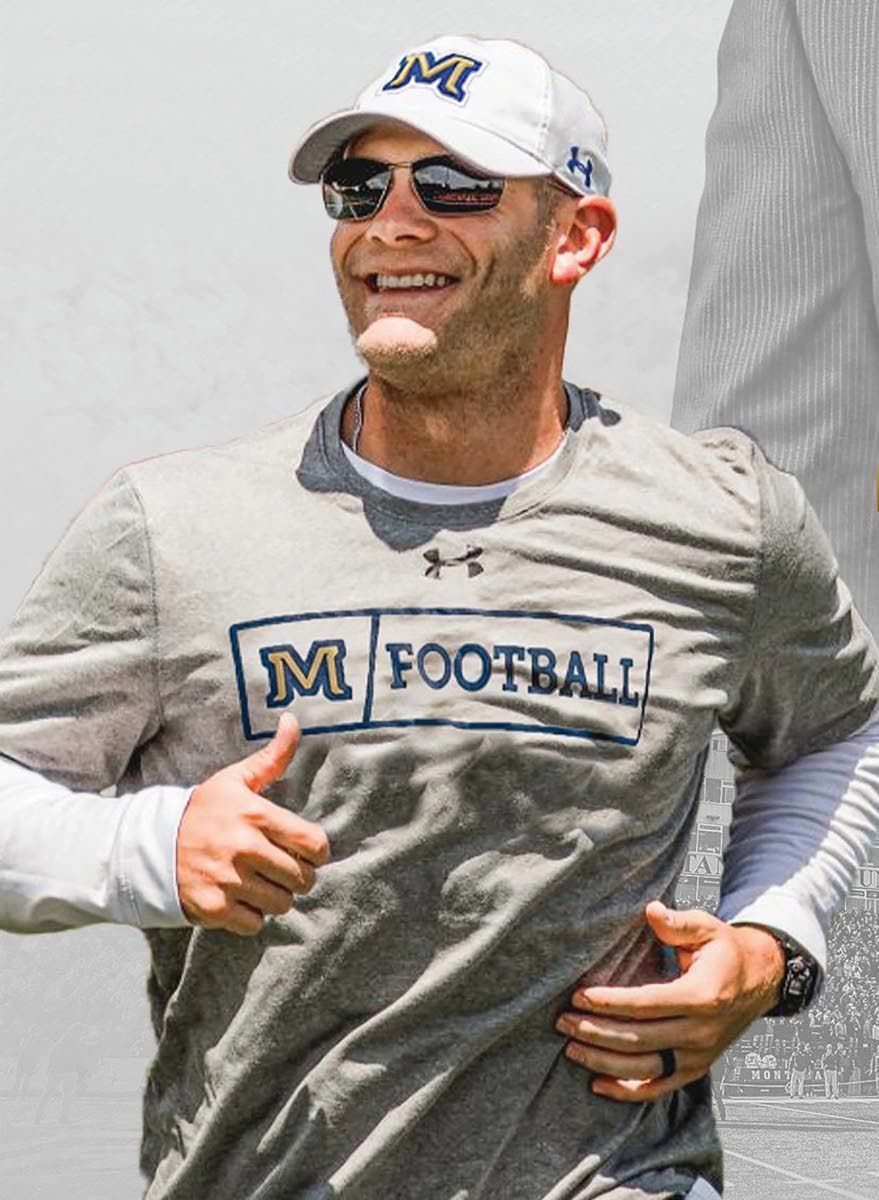 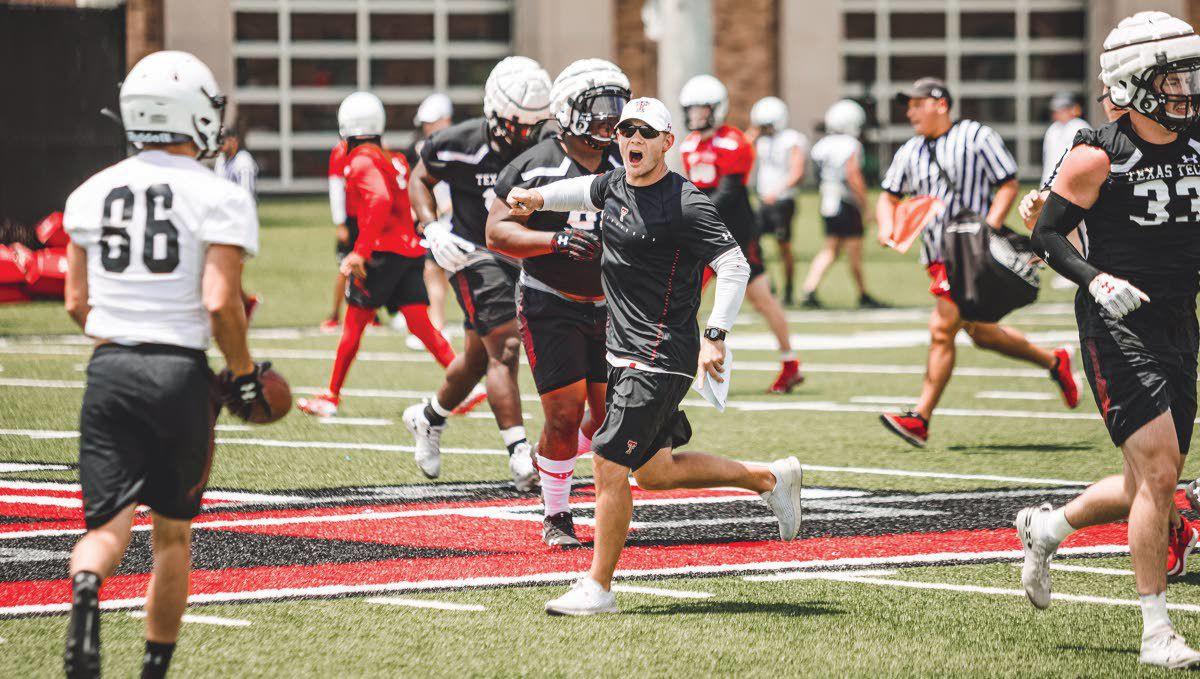 Former Genesee football player Justin Udy (center) shouts instructions at players during a 2019 practice when he was the quality control assistant at Texas Tech. The Class 1A Idaho football player of the year in 2006 was named Montana State’s offensive coordinator and quarterbacks coach in February.

Former Genesee football player Justin Udy (center) shouts instructions at players during a 2019 practice when he was the quality control assistant at Texas Tech. The Class 1A Idaho football player of the year in 2006 was named Montana State’s offensive coordinator and quarterbacks coach in February.

It’s a warm summer day on the Palouse in 2005, and Justin Udy wakes up at dawn to begin work in the wheat fields overlooking the Lewis Clark Valley, where he drives a combine harvester for farmers Jim and Diane Evans.

The work day is done when the sun goes down, and that’s when Udy hits the weight room at Genesee High School to prepare for the upcoming football season.

If the lights are on at the football field, Udy and his Bulldog teammates go to the field to throw some extra routes. The next day, they repeat it all over again.

That’s how it started for Udy, the former Genesee quarterback and freshly named offensive coordinator at Montana State in Bozeman, Mont.

About 13 years after lighting up Class 1A fields in Idaho, Udy is hoping to do the same in the NCAA’s Big Sky Conference with the Bobcats.

Udy’s journey to Bobcat Stadium — where some 20,000 fans regularly fill the stands — had many stops along the way, but it all started in the small Idaho town of about 900 people.

There, Udy helped lead the Bulldogs to the small-school state title in 2005 — part of a run of three consecutive appearances in the state final.

“Justin was just a great, really hard-working kid,” said Jason Hanson, the current Deary football coach and a former Genesee assistant under Jason Hanson (yes, same name but no relation). “He was a kid who set goals and honestly he would stop at nothing to reach those goals, and include his teammates in why he was doing it.

“Everybody was better around him because of Justin.”

Udy’s football career includes stops as a player and graduate assistant at Eastern Oregon, and, most recently, an offensive quality control assistant at Texas Tech.

But long before that, he was a dual-threat quarterback for the Bulldogs.

Udy, a 2007 Genesee graduate, credits the class ahead of him — with players like Carl Jensen, T. J. Flodin and Warren Booth — for helping build Genesee into a powerhouse in the mid-2000s. The Bulldogs’ three straight trips to State spanned 2004-06, and they won the state basketball title in 2007.

Sports are king in Whitepine League country, and Udy said it was a combination of major support from the community, school and coaches that led to the teams’ success.

“The thing you gotta remember, you drive down there and K-12 is in one building,” Udy said. “When I was going through, you had connections and relationships with kids that were in elementary school, who would come to games and have a shirt with your number on it. And they would support you almost like you were a professional or college player already, because the community was so tight-knit.”

Udy said games against Troy always were the biggest. Bleachers were limited, so fans would cram in around the field wherever there was space.

“It felt like every time we played them, it was the state championship,” Udy said. “Those were the games you kind of lived for and look back on.”

Genesee’s first big season in that stretch was in 2004. The Bulldogs weren’t expected to do much coming off a two-win season, and they surprised everyone by advancing all the way to the state title game.

On the way, they walloped Wallace 92-44 — a game in which Udy accounted for seven touchdowns.

The Bulldogs fell in the championship that year to Raft River — the alma mater of Udy’s dad, Dan — but the stage already was set for future success.

Genesee went 12-0 the next season in 2005, capped with a 44-20 championship win against Garden Valley at Bronco Stadium in Boise.

Udy passed for three touchdowns and rushed for another in the championship. He accounted for 199 yards of total offense.

After the game, Udy shared an emotional moment with his dad, the Genesee offensive coordinator at the time, and his brother and teammate, Jaymon.

“I’ve had a handful of times where I’ve seen my dad emotional, and that was one of them,” Justin said. “I remember I got to share that with my brother, who ended up getting to play a lot in that game and how special that was.

“All that work finally paid off. I knew in that moment after we won that we really did do something special.”

The next season, the Bulldogs made it back to the state final, this time falling to Council and future-NFL player Matt Paradis. But Genesee made up for it with a 25-1 season and a state title in basketball.

Justin was named the Class 1A football player of the year in 2006. He garnered success as a dual-threat quarterback with the speed to take advantage of the open space in eight-man football, combined with the accuracy to also find his open receivers.

“Justin easily, in my opinion, could’ve played just about any position on the field,” Hanson said. “You could’ve put him at center and he probably would’ve been a first-team all-state center.”

Udy’s play earned him a scholarship at Eastern Oregon for the next leg of his football journey. That’s where he discovered he wanted to be a coach when his playing time was done.

His then-coach Tim Camp gave him the opportunity to get started as a graduate assistant. From there, Udy had stops at South Dakota School of Mines, Utah State and Texas Tech last season. The Red Raiders averaged 30.5 points and 474 yards per game in 2019.

Udy said he grew up a fan of Big Sky football, and is grateful for the opportunity to be closer to friends, family and the community that helped shape him.

And Udy isn’t the only small-town coach from Idaho on the staff at MSU. Head coach Jeff Choate graduated from St. Mary’s High School in 1988.

“It’s really awesome (to see),” Hanson said. “If you set goals and set your mind to something, you can achieve it — it doesn’t matter what size school you come from.”