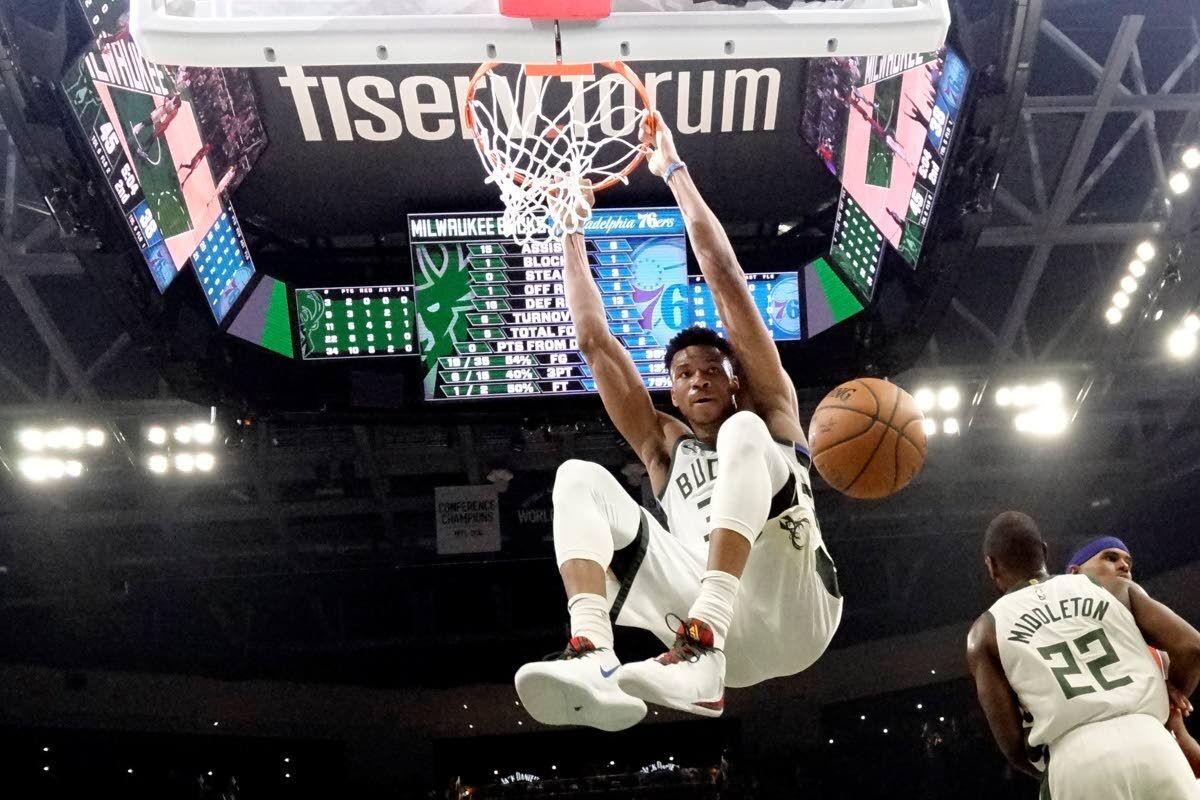 Milwaukee’s Giannis Antetokounmpo dunks during the first half of a Feb. 22 game against Philadelphia. The NBA returns with two games today in an eight-game sprint to the finish of the regular season with 22 teams. 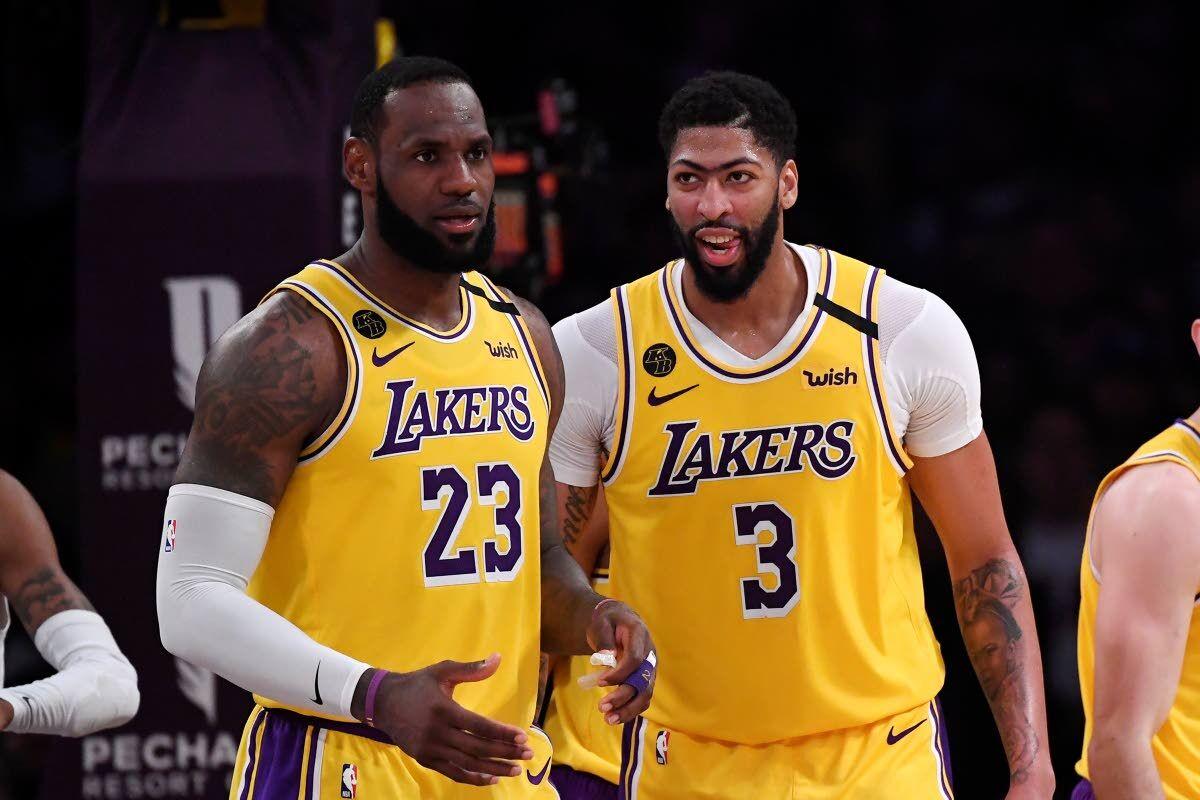 FILE - In this Feb. 21, 2020, file photo, Los Angeles Lakers forward LeBron James, left, stands with forward Anthony Davis during the second half of an NBA basketball game against the Memphis Grizzlies in Los Angeles. James and Davis had the Lakers on course to contend for another NBA title before the coronavirus pandemic upended their first season together. The superstars see no reason they can’t continue their quest in Orlando, and Davis even thinks the Lakers’ chances have improved.(AP Photo/Mark J. Terrill, File) 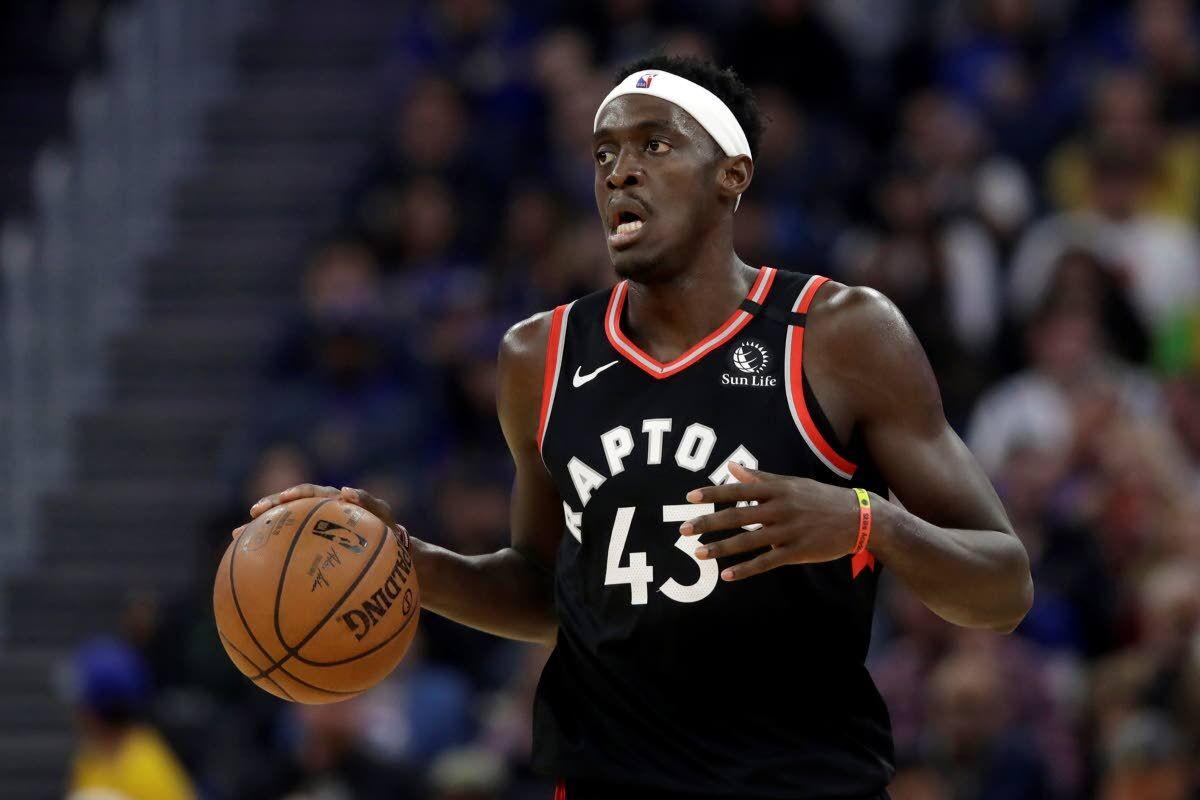 Milwaukee’s Giannis Antetokounmpo dunks during the first half of a Feb. 22 game against Philadelphia. The NBA returns with two games today in an eight-game sprint to the finish of the regular season with 22 teams.

FILE - In this Feb. 21, 2020, file photo, Los Angeles Lakers forward LeBron James, left, stands with forward Anthony Davis during the second half of an NBA basketball game against the Memphis Grizzlies in Los Angeles. James and Davis had the Lakers on course to contend for another NBA title before the coronavirus pandemic upended their first season together. The superstars see no reason they can’t continue their quest in Orlando, and Davis even thinks the Lakers’ chances have improved.(AP Photo/Mark J. Terrill, File)

LAKE BUENA VISTA, Fla. — Games were canceled. Practice facilities were shuttered. A season ended unceremoniously for eight teams. The draft process was delayed, as was free agency. Some players tested positive for the coronavirus. Many more took to the streets and used their voices to demand justice and equality as racism and police brutality sparked a nationwide conversation.

The world has changed since the NBA stopped March 11.

But for 22 franchises, there is a goal that remains in place.

The NBA, at long last, officially is back. A reopening night doubleheader inside the bubble at Walt Disney World awaits today, when New Orleans takes on Utah before a matchup of the top two teams in the Western Conference — the Los Angeles Lakers and Los Angeles Clippers.

There won’t be any fans in attendance, health and safety protocols that painstakingly were written in response to the coronavirus pandemic will be paramount, and teams can’t shower in the arena after games. But after 20 weeks of waiting, wondering and worrying, the 2019-20 NBA season is ready to hit the restart button with a champion scheduled to be crowned in October.

“Nobody’s life is pretty much how they planned it to be at this point with the pandemic, so you take it for what it is,” Clippers forward and reigning NBA Finals MVP Kawhi Leonard said. “Everybody is happy that a champion will be crowned this year, and if that’s the 2020 championship, then we want it. You know, that’s how I look at it. This is what the layout is, as far as to go out there and complete this journey.”

The field for the 16-team playoff bracket that will be finalized in August already is largely filled — 12 of the 22 teams at Disney have clinched spots and Dallas is on the brink of another one. It leaves three teams vying for two spots in the Eastern Conference, and six teams for one spot in the Western Conference.

For the front-runners like the NBA-leading Milwaukee Bucks and West-leading Lakers, the eight remaining games before the playoffs are about tuning up their games. For most of the other teams that have clinched berths, it’s about securing the best possible playoff seed. And for the hopefuls, it’s about finding a way to get into the field and stay at Disney at least a couple weeks longer than planned.

“We want to get back to work,” said San Antonio coach Gregg Popovich, whose Spurs will aim to become the first franchise in league history to make 23 consecutive playoff appearances. “We want to do what we’re all used to doing. We want to do as much as we can, safely, to energize the country, to play the games we all love. And as long as we can do that safely, it’s a big win for everybody.”

Starting Friday and running through Aug. 14, there will be at least four and sometimes as many as seven games per day, spread out in a three-arena corner of the Disney complex. There will be many instances where three games are happening at once. There also will be days that have games running for more than 10 consecutive hours.

After no basketball for what seemed like forever, a hoops smorgasbord awaits.

The biggest names are here: reigning MVP Giannis Antetokounmpo of the Bucks, LeBron James of the Lakers, scoring champion James Harden of Houston, plus the reigning Finals MVP and All-Star Game MVP in Leonard. Of the 25 players on this season’s All-Star rosters, 23 are at Disney and a 24th — Indiana’s Domantas Sabonis — could return if his injured left foot heals.

Also here: the defending champions. Toronto lost Leonard and Danny Green to the Clippers in free agency in the offseason — more than a year ago now. Then the Raptors laughed off suggestions they wouldn’t be good enough to make the playoffs. They enter the restart holding the No. 2 seed in the East, looking every bit like a team capable of another very deep run.

“We’ve been through it,” Raptors guard Fred VanVleet said. “We never got the respect before the last couple months of last season. We’re not used to getting pats on the back or flowers, so it’s not really that different.”

There are eight teams not here — Golden State, which went to the NBA Finals the past five seasons before sputtering through an injury-plagued year this season, among them. The others whose seasons ended March 11: Minnesota, Cleveland, Detroit, Atlanta, New York, Charlotte and Chicago.

Ratings for the games at Disney are expected to be big. Every game will be televised, as usual. A sprint to the playoffs is about to begin.

The longest timeout in NBA history finally is done. Game on, again.

“The intensity is going to start to pick up with the games just meaning much more,” Philadelphia forward Al Horford said. “This is the position you want to be in.”