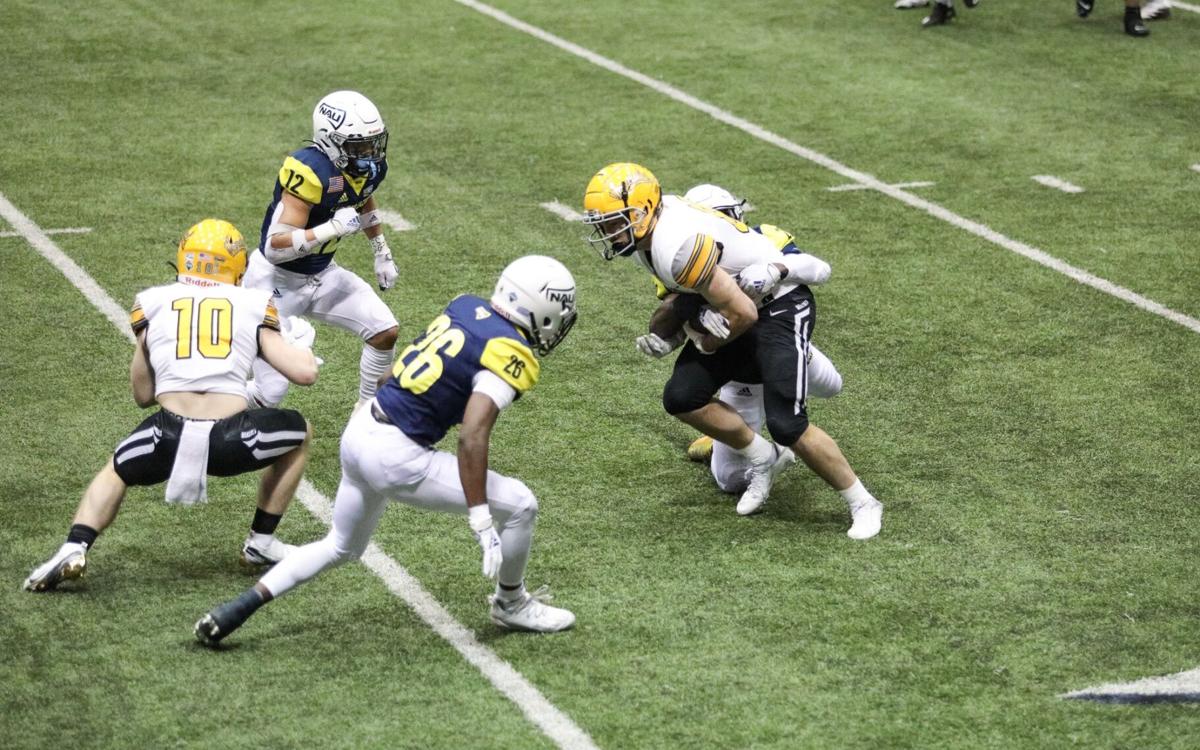 Idaho receiver Hayden Hatten, with ball, tries to break out of a Northern Arizona tackle during the Vandals’ loss to the Lumberjacks on Saturday at Walkup Skydome in Flagstaff, Ariz. Hatten posted 135 yards on seven receptions. 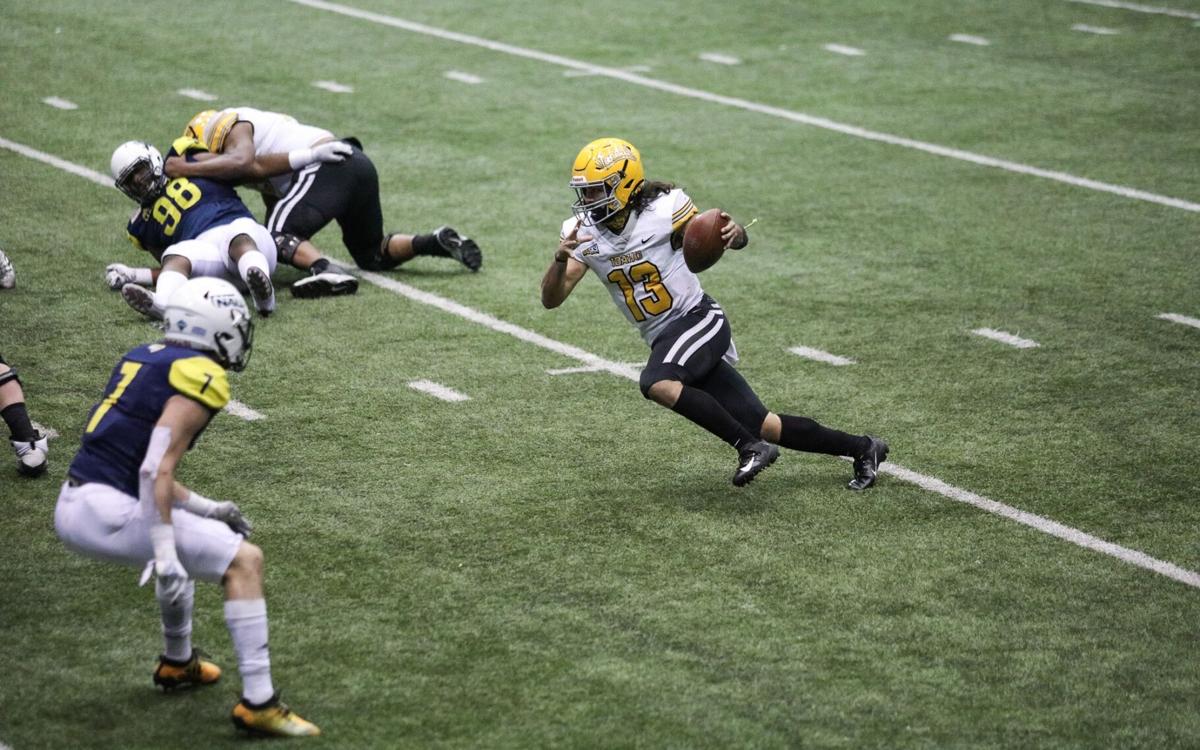 Idaho quarterback Zach Borisch, with ball, looks for a rushing lane during the first half of the Vandals’ loss to Northern Arizona on Saturday at the Walkup Skydome in Flagstaff, Ariz. Borisch registered 78 rushing yards on 15 carries.

Idaho receiver Hayden Hatten, with ball, tries to break out of a Northern Arizona tackle during the Vandals’ loss to the Lumberjacks on Saturday at Walkup Skydome in Flagstaff, Ariz. Hatten posted 135 yards on seven receptions.

Idaho quarterback Zach Borisch, with ball, looks for a rushing lane during the first half of the Vandals’ loss to Northern Arizona on Saturday at the Walkup Skydome in Flagstaff, Ariz. Borisch registered 78 rushing yards on 15 carries.

There’s an argument to be made whether Idaho’s spring-season football finale was unimportant in the grand scheme of things and thus, forgettable.

Either way, the Vandals are probably planning to flush most of this one from their collective memory.

UI was shut out in the second half Saturday and never found the end zone in a 19-9 loss to fellow Big Sky also-ran Northern Arizona at the Walkup Skydome in Flagstaff, Ariz.

The Vandals (2-4) conclude their bizarre, delayed, pandemic-racked campaign fifth in the conference. They had half a normal season's worth of playing experience, if nothing else.

They fell to 1-10 in BSC road games since rejoining the league in 2018. Their lone win came last season, a 60-53 overtime shootout against NAU in Flagstaff.

While the offensive fireworks were almost nonexistent on this year's closing trip, the season’s trend of weekly aberrations persisted to the end.

Idaho fielded another surprise, platooning quarterbacks early on. The Vandals divvied the reps between 6-foot-5 pro-style signal-caller Mike Beaudry and run-first Zach Borisch, a utility player who broke out under center with an exceptional ball-carrying showing in a tight loss April 10 at Eastern Washington.

The rotation was employed throughout the first quarter. Beaudry wound up taking the majority of snaps thereafter.

The Vandals were running schemes more typical of their balanced M.O., but could not replicate the production or energy seen last weekend in Cheney, Wash., when UI and the No. 9 Eagles traded momentum until the late stages.

Beaudry began in a groove, completing 10 of his first 11 passes. From the second series of the second quarter on, the grad transfer went 9-for-21.

He totaled 212 yards through the air and was sacked four times as NAU’s typically shoddy defense dialed up effective pressure, rattling UI’s youthful offensive line and Beaudry, who posted 41 yards on 10 scurries out of crumbling pockets.

Borisch returned midway through the third after disappearing from the lineup for 20 minutes. He spearheaded a promising, ground-and-pound series that ended just past midfield on a fourth-down Beaudry incompletion.

Borisch logged 78 yards on 15 carries. He had 55 yards in the first quarter. His lost fumble on the first play from scrimmage didn't result in anything for NAU.

“I was trying to still use Zach for the running game. He ran well,” Petrino said. “At times, (the Lumberjacks) were putting things in there to stop that package. Mike, at times, threw the ball well. ... Both of them did some good things, but we didn’t do enough all the way around.”

The Vandals’ lethargic offense went three-and-out twice in the second half. Two other slow-burning possessions went lifeless after a first down.

A 10-point deficit with 10:50 left in the fourth felt insurmountable. Idaho managed 31 points against No. 9 EWU last weekend, yet could hardly pass midfield versus the Lumberjacks, who own the worst defense UI saw this season.

Beaudry led a last-ditch effort, sparked by a 20-yard pitch-and-catch to star Arizonan receiver Hayden Hatten, who bailed UI out often, torching his home-state foes for 135 yards on seven catches (103 on five in the first half).

Beaudry was sacked twice in NAU territory, however, once on fourth down. The Lumberjacks milked the final seven minutes off the clock.

“They blitzed us and played (man coverage) on some key down and distances,” Petrino said. “There were a couple of times we beat the guys at the line and we were wide open, and either we missed or didn’t see them, or didn’t protect long enough.”

Idaho’s offense chugged along well throughout the first half, stacking up 298 yards against only 135 for NAU. Completing drives was the issue.

Settling for field goals on three of its first four series, UI took a 9-3 lead at 7:28 in the second quarter after a career-long 51-yard boot from Cade Coffey. NAU went on to score the following, and final, 16 points.

Idaho went 2-for-12 on third downs and recorded its lousiest scoring output against a Lumberjack outfit that entered the game at the bottom of the BSC in several defensive categories. On a postgame radio show, coach Chris Ball said NAU also was thin in its secondary because of contact-tracing protocols.

“We were a lot more consistent last week, honestly — driving the ball and staying on the field,” Petrino said.

“We got all kinds of yards in the first half, but we didn’t get enough points. Ultimately, that came back and hurt us.”

Beaudry and Borisch guided a snap-swapping, 11-play, 94-yard march on Idaho’s third drive of the game, which stalled inside the 10 via holding penalty.

Nonetheless, Idaho found itself up 6-0 in a relatively encouraging start.

In response, ’Jacks running back Draycen Hall shed five Vandal defenders, scampering 43 yards on a dump-off pass from quarterback Keondre Wudtee (13-for-23, 244 yards). Backed up in the red zone, Idaho’s defensive front held, as had been the case for much of the afternoon.

Later in the second quarter, NAU punter DJ Arnson pinned the Vandals at their 2. The Lumberjack defense whisked UI off the field, then tipped Coffey’s punt to set up a short touchdown pass from Wudtee to an uncovered Coleman Owen with under two minutes to go until intermission.

UI squandered a chance shortly after. A 34-yard snag from Hatten got UI in Coffey’s range, but his 34-yard try (on third down, with nine seconds remaining) bounced off the left upright, ending the first half with NAU in front 10-9.

UI rolled up 169 ground yards on 35 attempts (an average of 4.83 yards per). But the Vandals were pressed into passing situations on third downs.

Despite that, the front seven fared well, clamping down in the red zone, holding the Lumberjacks to 76 yards rushing and accumulating 11 tackles for loss.

Charles Akanno captained the veteran Idaho unit with two TFLs and a sack.

“It’s tough when you don’t have two of your best players, but I thought our young linebackers stepped up and played hard,” Petrino said.

So there was meaningful development for the Vandal newbies.

Ahead of a fast-approaching fall season, they’ll probably try to flush most everything else.

Clark reported from Lewiston. He may be contacted at cclark@lmtribune.com, on Twitter @ClarkTrib or by phone at (208) 627-3209.

Pressure from NAU’s front forced Idaho’s listless offense into a three-and-out early in the fourth quarter — its seventh consecutive empty possession — with the Vandals trailing 16-9 and in need of a spark. Lumberjack receiver Brandon Porter broke free for a 24-yard reception and an Idaho personal foul followed, putting the hosts in Aguilar’s range. His 34-yard kick stretched the lead to 10 points, an insurmountable margin for UI with 10:50 left.

The Vandals conclude their shortened, delayed spring season at 2-4. They’ll begin preparations for their traditional fall season this summer, then retake the field Sept. 4 at the Kibbie Dome against Division II opponent Simon Fraser.