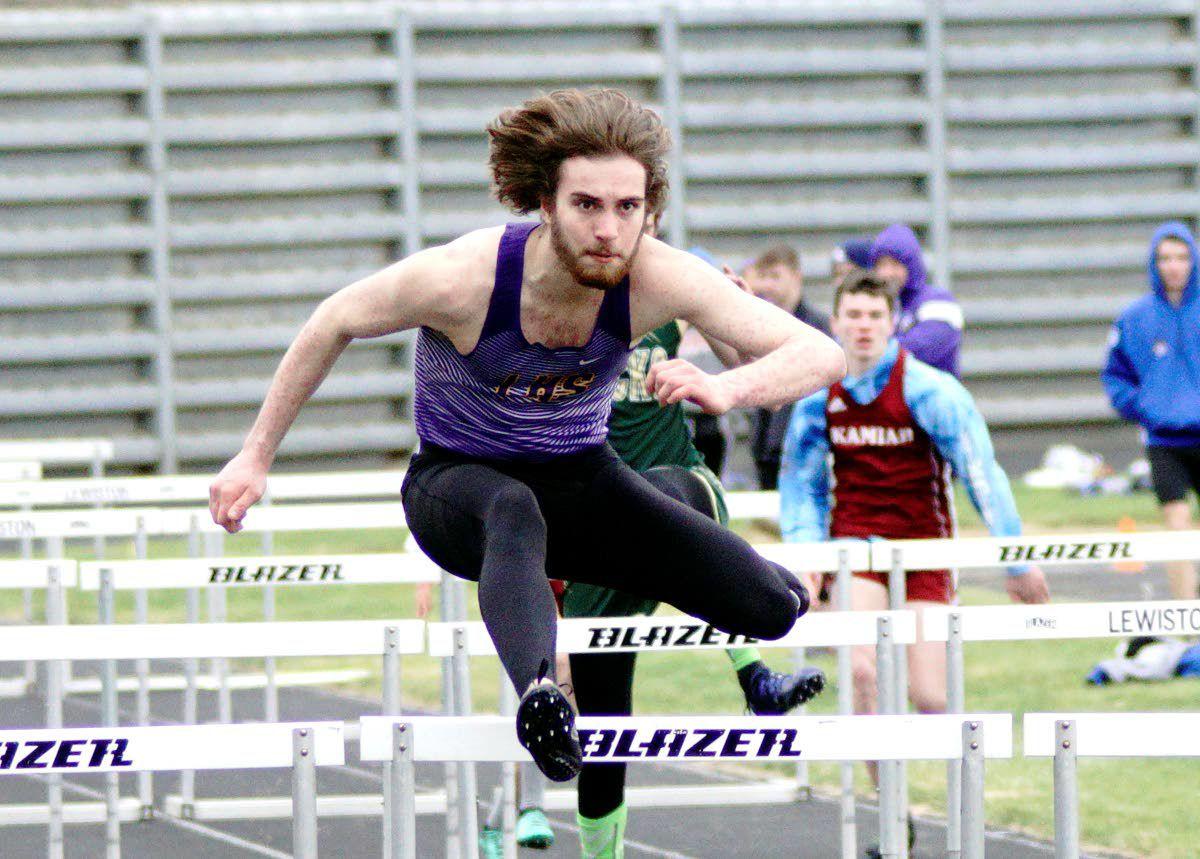 Lewiston High senior Harrison Smith surges to a first-place finish in the boys’ 110-meter hurdles in the Lewiston Invitational track meet March 14 at Vollmer Bowl in Lewiston. He also won the 300 hurdles, anchored a relay triumph and placed third in the high jump. But because of the coronavirus pandemic, the Bengals haven’t had a chance to compete since that day. 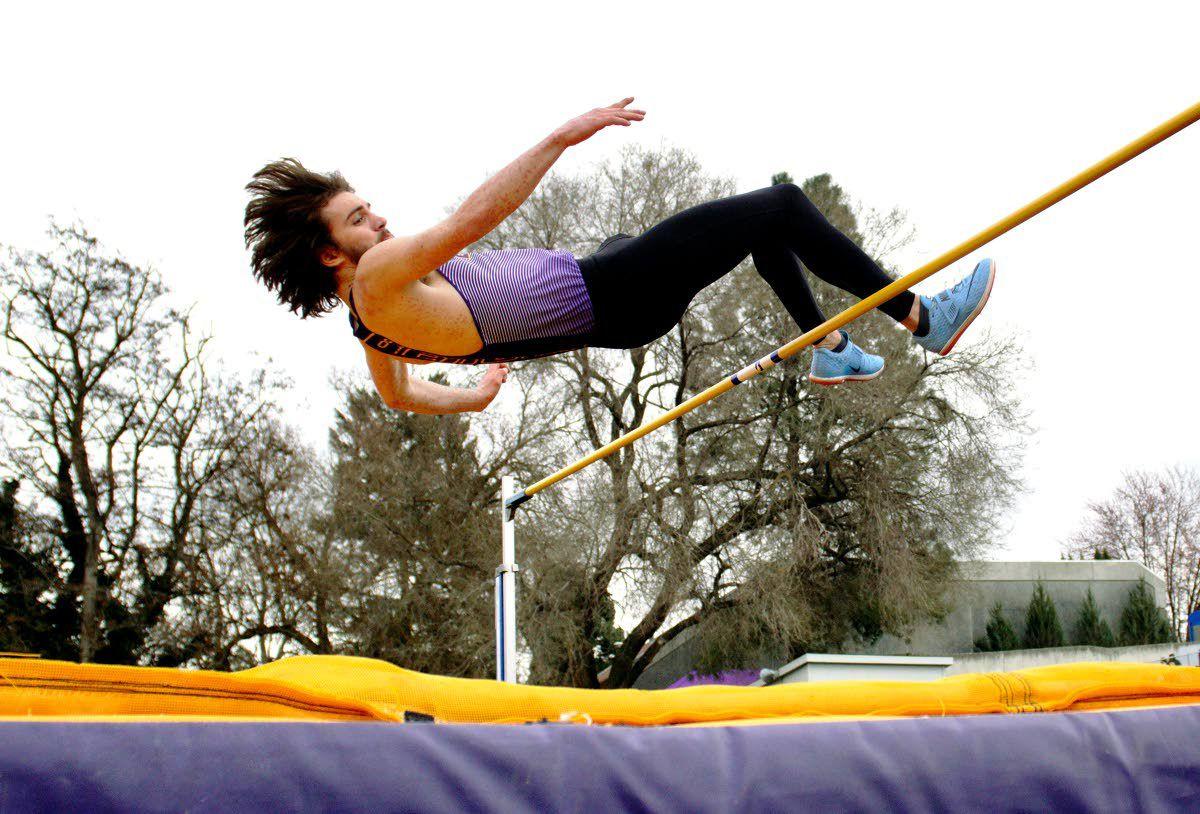 Lewiston's Harrison Smith clears the bar in the high jump on his way to a third place finish Saturday during the Lewiston Invite.

Lewiston High senior Harrison Smith surges to a first-place finish in the boys’ 110-meter hurdles in the Lewiston Invitational track meet March 14 at Vollmer Bowl in Lewiston. He also won the 300 hurdles, anchored a relay triumph and placed third in the high jump. But because of the coronavirus pandemic, the Bengals haven’t had a chance to compete since that day.

Lewiston's Harrison Smith clears the bar in the high jump on his way to a third place finish Saturday during the Lewiston Invite.

Third in a series profiling high-school seniors whose quests were placed on hold in recent weeks by the coronavirus pandemic.

During his junior track and field season at Lewiston High last year, Harrison Smith’s long-legged stride in the 300-meter hurdles sometimes worked against him.

Like many young hurdlers, he had yet to master the art of alternating his lead leg when surmounting the obstacles. As the race became more taxing in the homestretch, he was sometimes forced to shorten his strides as he approached a hurdle, costing him valuable split-seconds.

Midway through the 5A final in that event at the Idaho state large-school meet at Eagle, Smith appeared to be running in third place. He wound up seventh, and Bengals coach Keith Stuffle thought he could have done better. Quite a bit better.

Smith spent the offseason working on the problem. He turned out for summer track, where the length of his favored hurdles race was 400 instead of 300 meters. He made the transition smoothly and drew confidence from it. He continued to work out through the fall and winter.

On the first day of LHS hurdles training last month, he showed Stuffle the fruit of his labors. For the first time ever in a full-speed 300-meter, he sailed over a hurdle with what is generally his trail leg.

“You can win State this year,” the coach said.

Because of the coronavirus pandemic, Idaho high-school sports have been suspended and may be scrapped altogether as soon as today. The Bengals squeezed in just one wind-whipped meet before the ban was imposed, the Lewiston Invitational on March 14, when Smith won two hurdles races, anchored a relay victory and placed third in the high jump.

Fortunately for Smith, his eggs aren’t all in one basket.

He sports a 3.98 grade-point average, showing a particular flair for math and science. (His parents, Paul and Angela Smith, make their living in wind energy and accounting, respectively.) Sociable and charismatic, he’s long been involved in choir and student government, serving as LHS president this year. At track meets at Vollmer, he seems innately attuned to his teammates, and vice versa.

There’s not much track background in his family, but Smith was introduced to the 300 hurdles by Stuffle’s son Zion, who won state titles for the Bengals in 2013 and ’14.

“Hurdling, there’s not a lot of people who do it — it’s a unique thing,” Smith said by phone Sunday. “I’ve never been the quickest guy in any sport. With track, I found out that if you run correctly you can get so much better. With hurdles, it’s the same thing — you can almost feel it. You can feel yourself doing things correctly.”

Smith accomplished enough last year to open a few doors to college track. On his way to placing seventh in the state 110-meter hurdles, he lowered his personal record to 14.91 seconds, which essentially locked up an opportunity at Spokane Falls Community College, for example.

But his options are limited by the lack of a full senior season. It’s a similar story for LHS senior distance runner Caden Byrer, a late-bloomer who placed sixth in the state cross country meet last fall.

Last spring, Smith clocked a PR 40.49 in the state prelims of the 300 hurdles, and the winning time wound up being 39.43 (by a 2019 senior, by the way). A year later, that clocking seems doable for Smith, largely because of his refined technique.

Early in the race, he generally takes 14 strides between hurdles. In the past he was forced to switch to 16 when fatigue set in. Now he can switch to 15 and save time.

“Harrison couldn’t commit — he was at that stage in his hurdles career where he was not able to 15-step,” Stuffle said of last year. “When he pushed all-out — and he has that beautiful open stride — he could come up on the hurdles and end up stutter-stepping. He wouldn’t commit to that other leg. Now he does.”

Said Smith, “It’s just a different ballgame if you get that alternation.”

In any case, his main focus is academics. He plans to enroll at the University of Idaho in the fall and maybe work toward an engineering degree. Perhaps he’ll try out for the school’s nonsanctioned club in hockey, a sport he pursued for 14 years as a youngster.

As for track and field, he’s not sure. College courses in subjects like calculus will require an undistracted focus. Does his potential in track make it worth adding another element to the mix, either at UI or elsewhere? What exactly is his potential?

So far this spring, he’s not getting many answers to those questions. Maybe he’ll have to live without them.

“I’m still working out as much as possible, doing whatever I can to get better,” Smith said. “It’s looking pretty grim but I’m still optimistic. There’s not much you can do either way.”