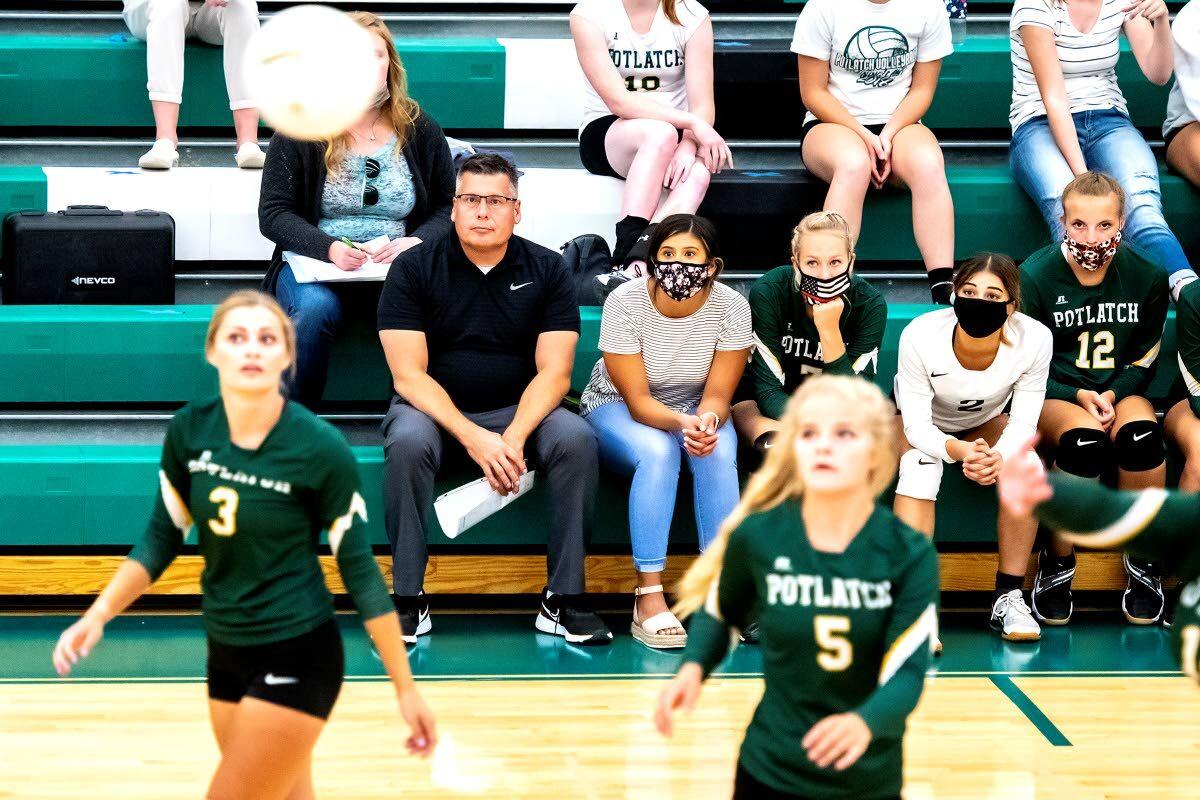 Potlatch volleyball coach Ron Dinsmoor (back left) sits next to daughter Rachel Malm, his assistant, while watching a Whitepine League Division I volleyball match against Prairie on Sept. 10. 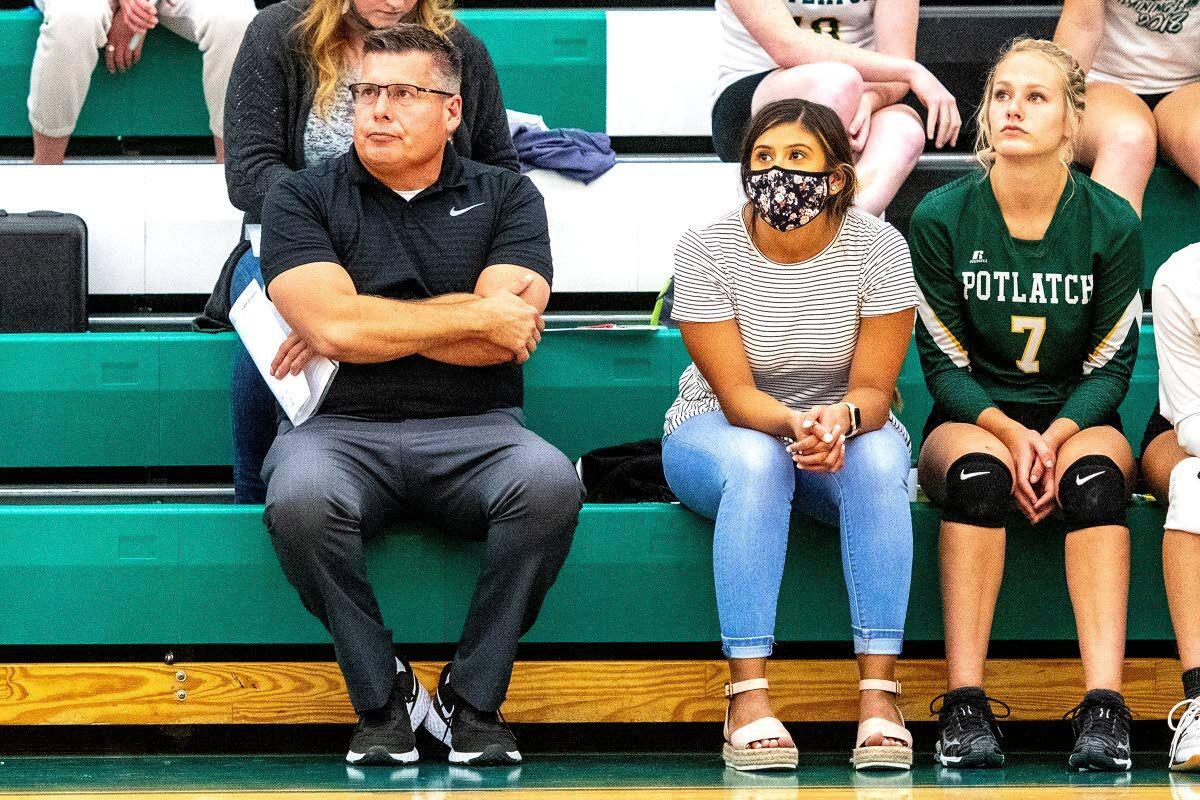 Potlatch volleyball coach Ron Dinsmoor (left) and daughter Rachel Malm spend time together on their ride from the valley putting together practice or game plans for the Loggers.

Potlatch volleyball coach Ron Dinsmoor (back left) sits next to daughter Rachel Malm, his assistant, while watching a Whitepine League Division I volleyball match against Prairie on Sept. 10.

Potlatch volleyball coach Ron Dinsmoor (left) and daughter Rachel Malm spend time together on their ride from the valley putting together practice or game plans for the Loggers.

POTLATCH — When Ron Dinsmoor took the volleyball coaching position at Othello, Wash., in 1989 as a 23-year-old physical education teacher with no previous experience in the sport, little did he know 30 years later he’d be coaching alongside his daughter at Potlatch.

Dinsmoor, 54, is in his fourth season as the Loggers’ coach, and this year he’s joined by his daughter, 24-year-old Rachel Malm, who coaches junior varsity and serves as the varsity assistant.

It’s full circle for the pair of Pullman High School grads — 1984 for Dinsmoor and 2014 for Malm, who went on to play libero and defensive specialist at Big Bend Community College.

Dinsmoor first coached Malm when she was 10 years old, and later they coached club teams together in Pullman. But now, they finally get to share the sideline for the first time on a daily basis.

“For me it’s really cool ’cause the JV match is first, so I get to sit in the stands and watch my kid coach,” said Dinsmoor, who also is the CLUB ZZU volleyball director in Pullman. “Normally, I’d have to drive somewhere to watch her coach.”

The two make a good team since they know how the other acts as a coach and can help balance each other out.

“I like just seeing what he does, and it’s good I can kind of look at the other side and give little reminders to calm him down,” Malm said, laughing. “It’s been really great. We’ve had a long volleyball journey, so it’s been great to do it together.”

With Dinsmoor now living in Clarkston and Malm in Lewiston, where she’s in her final semester at Lewis-Clark State, the pair get extended time together on the hour-long drive to Potlatch for practice and back-and-forth from matches.

Some of that is spent talking about their day. The rest is extra time to plan for practice or discuss how a match went.

“My favorite thing is just the conversations we get to have on the way to practice,” Malm said. “Just learning new skills and knowledge from him and being able to challenge him and share my ideas.

“We have really good conversations together and we really care about those girls, so it’s cool to just come together (with) our passions and dedication for those girls and the team, and just bring it all together.”

But Potlatch has been on the rise in recent seasons in Idaho’s best Class 1A-Division I conference. The Loggers are 6-1 this season and last season finished third in the league at 7-5 (10-5 overall).

“We’re not there yet, but we’re getting there,” Dinsmoor said. “If Rachel can help us get there, how cool would that be?”

From unlikely background to state champion

Dinsmoor never had played, coached or spent much time watching volleyball when he was picked as the coach at Othello as a fresh Washington State graduate.

So Dinsmoor took to attending coaching clinics in the Seattle area to learn everything he could about the sport.

His lack of experience ended up working in his favor because he was able to learn everything right the first time, he said.

“I think that probably helped my coaching career because I didn’t have any bad habits because I’d never played or coached before,” Dinsmoor said. “So I got all the current information from really, really good high school coaches, college coaches and club coaches, so that probably actually really helped me.”

After five years at Othello and another as an assistant at 4A Kent Meridian, Dinsmoor’s career took off at Garfield-Palouse.

Dinsmoor led the Vikings to Washington Class B state titles in 1999 and 2004. He took Gar-Pal to State five consecutive years before he retired the first time after the 2004 season.

But his volleyball career wasn’t done.

He was asked to become director of the Pullman Volleyball Club in 2005 and still serves as director at CLUB ZZU, which he started in 2011.

Unlike her dad, Malm grew up on the volleyball court.

She was 2 when Dinsmoor took charge at Gar-Pal, and remembers going to practices as a young child. The Viking players were her heroes.

“I just remember loving the players that he had,” Malm said. “They were just so cool and they were just my idols. I loved being around that, being in the gym and being able to bounce the ball around or just be around them.”

Malm first took the court as a player when she was 10 and continued to play club, middle school and high school volleyball.

She had a wake-up call as a freshman at Pullman when she didn’t make the JV team at first.

“Every eighth grader from her club team made JV except her,” Dinsmoor said. “She was devastated. I think she thought because her last name was Dinsmoor and because of the club team, she was going to get put on JV.”

The cut was an eye-opener for Malm. She later made her way onto the JV team, then spent the next three years on varsity, qualifying for state as a sophomore.

Her play with the Greyhounds landed her a spot on the roster at Big Bend in Moses Lake.

“She never would’ve made it to play collegiately if she hadn’t had that eye-opener (as a freshman),” Dinsmoor said.

Even while she still was playing in college, Malm would sometimes help out with club teams in Pullman. As club coaches, Malm and Dinsmoor helped lead ZZU teams to titles in Spokane and Denver. However, it never was a full-time coaching gig until this season at Potlatch.

It’s still unknown how far the Loggers will go this year or in the future with juggernauts like Troy standing in the way.

But win or lose, Dinsmoor and Malm still will have that hour-long drive back to the L-C Valley every night.

Maybe someday, Dinsmoor will be the assistant and Malm will be the one with the clipboard.

“Volleyball will always be our connection,” Dinsmoor said. “My goal would be to be her full-time assistant someday if I can. If I’m still alive and kicking and she would need me, I could be her assistant somewhere.”