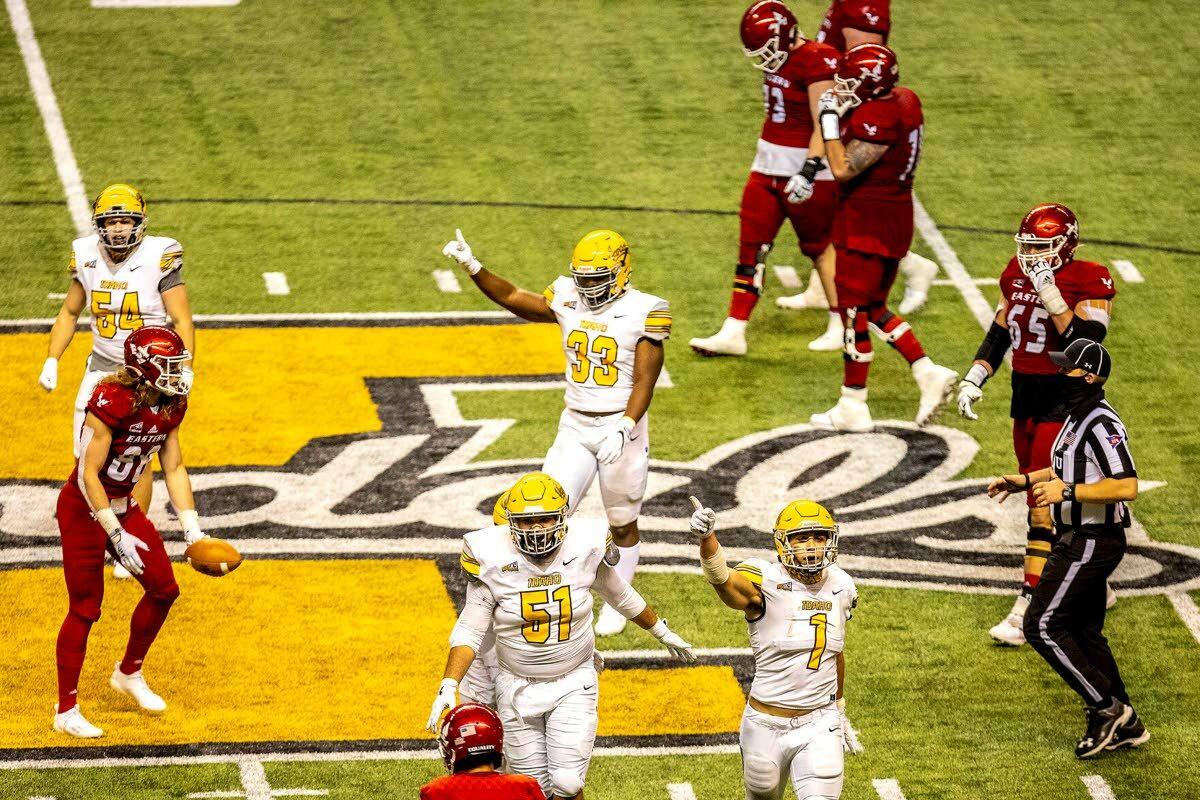 Idaho players celebrate their 28-21 win against Eastern Washington on Feb. 27 at the Kibbie Dome in Moscow. 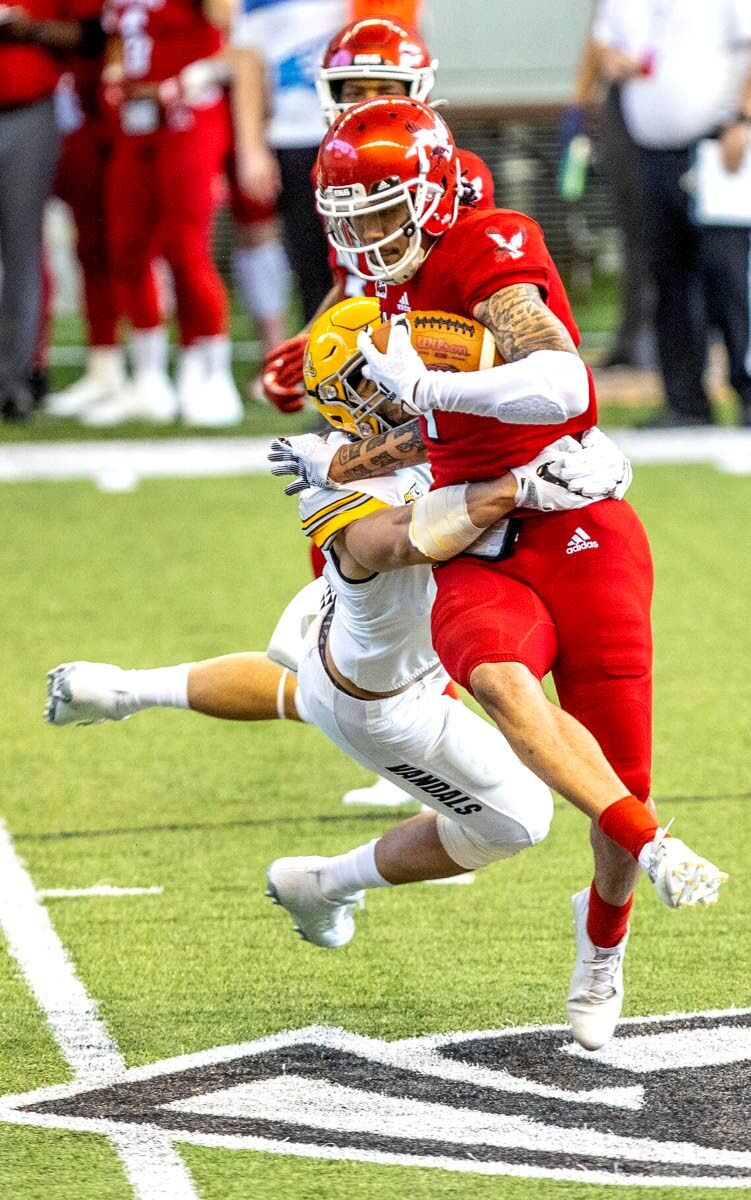 Eastern Washington receiver Talolo Limu-Jones, with ball, is brought down by Idaho linebacker Christian Elliss during the Vandals’ 28-21 win Feb. 27 at the Kibbie Dome in Moscow.

Idaho players celebrate their 28-21 win against Eastern Washington on Feb. 27 at the Kibbie Dome in Moscow.

Eastern Washington receiver Talolo Limu-Jones, with ball, is brought down by Idaho linebacker Christian Elliss during the Vandals’ 28-21 win Feb. 27 at the Kibbie Dome in Moscow.

In preparing for a rare, same-season college football rematch, Idaho dug deeper into its playbook.

Expect the Vandals to toss some curveballs Eastern Washington’s way when the Big Sky rivals square off at 1 p.m. today on “The Inferno” at Roos Field in Cheney, Wash.

With several games worth of film on hand, including a Week 1 meeting between the sides, “out-scheming” becomes more challenging.

To upset the No. 9 Eagles (4-1) — and muddy EWU’s Football Championship Subdivision playoff prospects — the Vandals (2-2) likely will need to work in a few surprises while operating close to flawless elsewhere.

Eastern is riding a school-record 16-game winning streak on its red turf. The Eagles outscored opponents 52-23 on average during the stretch.

“It really comes down to execution. You’ve gotta execute what you’re doing in all three phases,” the eighth-year Vandal boss continued, “but also make them have to adjust to some new things you’re doing.”

And his Eagles haven’t dropped a game since UI’s 28-21 Kibbie Dome comeback win Feb. 27. The Vandals erased a 14-0 deficit and quarterback Mike Beaudry connected with Hayden Hatten for the game-winner with 54 seconds remaining.

EWU coach Aaron Best was one of several key pieces absent then. He drew a positive COVID-19 test just days before.

“We’re playing a team we haven’t beaten in a while. It’ll be fun and new for me,” Best said.

“I do know this: We’re going back home and we love to play on the Red.”

Idaho also popped Eastern in 2019 in Moscow. UI led 28-0 at halftime, then held on to win 35-27 — the decision contributed greatly to EWU being kept out of the playoffs.

The Vandals can play spoiler again. If they succeed, there’s a slight possibility the playoff selection committee reconsiders an earlier notion that Big Sky teams with two losses are disqualified from contention.

The Eagles, with a win in their season finale, can lock up a spot.

“The ability to do better in Round 2 is exciting for us,” Best told the Spokesman-Review. “Now that we’re 4-1, (we) have a chance to substantiate something we wanted to earn from the start of the season: a seventh game.”

The most recent showdown at Roos, in 2018, went convincingly to EWU, 38-14. The feud enjoys more parity now.

UI’s defensive front seven fared well in rattling Barriere and hampering Eastern’s dynamic offense in the first game, holding EWU about 150 yards and 20 points under its per-game averages. The Eagles’ 579.8 yards and 41.2 points per game rank No. 2 and 5 in the FCS, respectively.

“Stop their quarterback. That’s still the main goal,” said Walker, who leads the Big Sky in tackles per game (15.7). “As long as we contain him and understand that’s the main threat, we have a chance.”

Petrino emphasizes time of possession versus Eastern. A three-man UI rushing game has improved steadily this year, and probably will be leaned on to sustain possessions with the Vandals’ quarterback situation up in the air.

“We gotta stay on the field as long as possible,” Petrino said. “The very best way to contain (Barriere) is to have him stand on the sideline.

“Then do a good job of getting pressure on him and not giving him very long to throw the ball. If he moves and makes time, then he makes big plays.”

EWU handled No. 11 UC Davis 32-22 in Cheney on April 3, while the Vandals couldn’t find an offensive groove in a 24-22 loss to Idaho State in Pocatello.

Sophomore signal-caller Nikhil Nayar took the reins from the injured Beaudry in the second quarter, but struggled, completing just 11 of 34 passes. Freshman CJ Jordan was not available.

It’s unknown who’ll get the nod, or how many receivers will be present after UI had just three to work with last week.

Eastern’s defense, albeit overshadowed by the offense, has been solid, limiting opponents to a 35.6-percent conversion rate on third downs and a 6-for-19 mark in the red zone.

“They have a good linebacker corps, good safeties,” Hatten said. “The whole team is good.”

Barriere sits in the top three in most individual FCS offensive categories. He’s passed for 1,879 yards and 16 scores, completing 64.3 percent of his attempts.

Receivers Talolo Limu-Jones and Freddie Roberson have combined for 998 yards and five touchdowns.

The Eagles were plagued by frequent drops Feb. 27, and Barriere went 32-for-57. His pass-catcher pool is deeper now.

Eastern, like Idaho, hasn’t escaped weekly roster uncertainty. Twenty Eagles have made their first career starts this season, and inexperience is prevalent on Idaho’s offensive line and in its secondary.

ATTENDANCE NOTE — Only some student-athlete guests and EWU students will be admitted because of coronavirus protocols.

FRONTIER EXPERIENCE — Petrino’s father, Bob Petrino Sr., coached at Carroll College, and Paul played and was an assistant there in the days when Frontier Conference members met league adversaries twice.