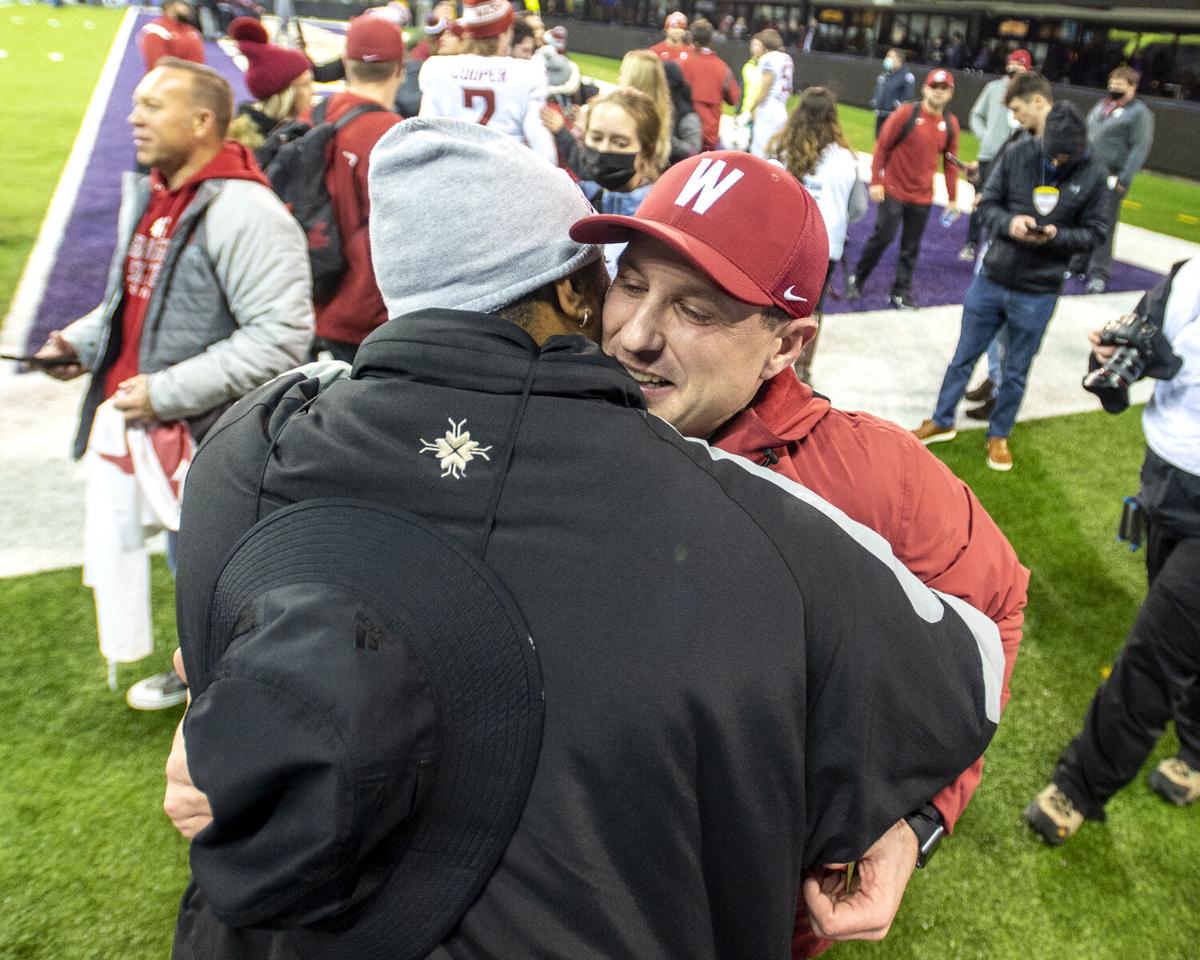 Jake Dickert receives a hug after Washington State beat Washington in the 113th Apple Cup on Friday at Husky Stadium in Seattle. Dickert was named the permanent head coach of the football program Saturday, agreeing in principle to a five-year contract. 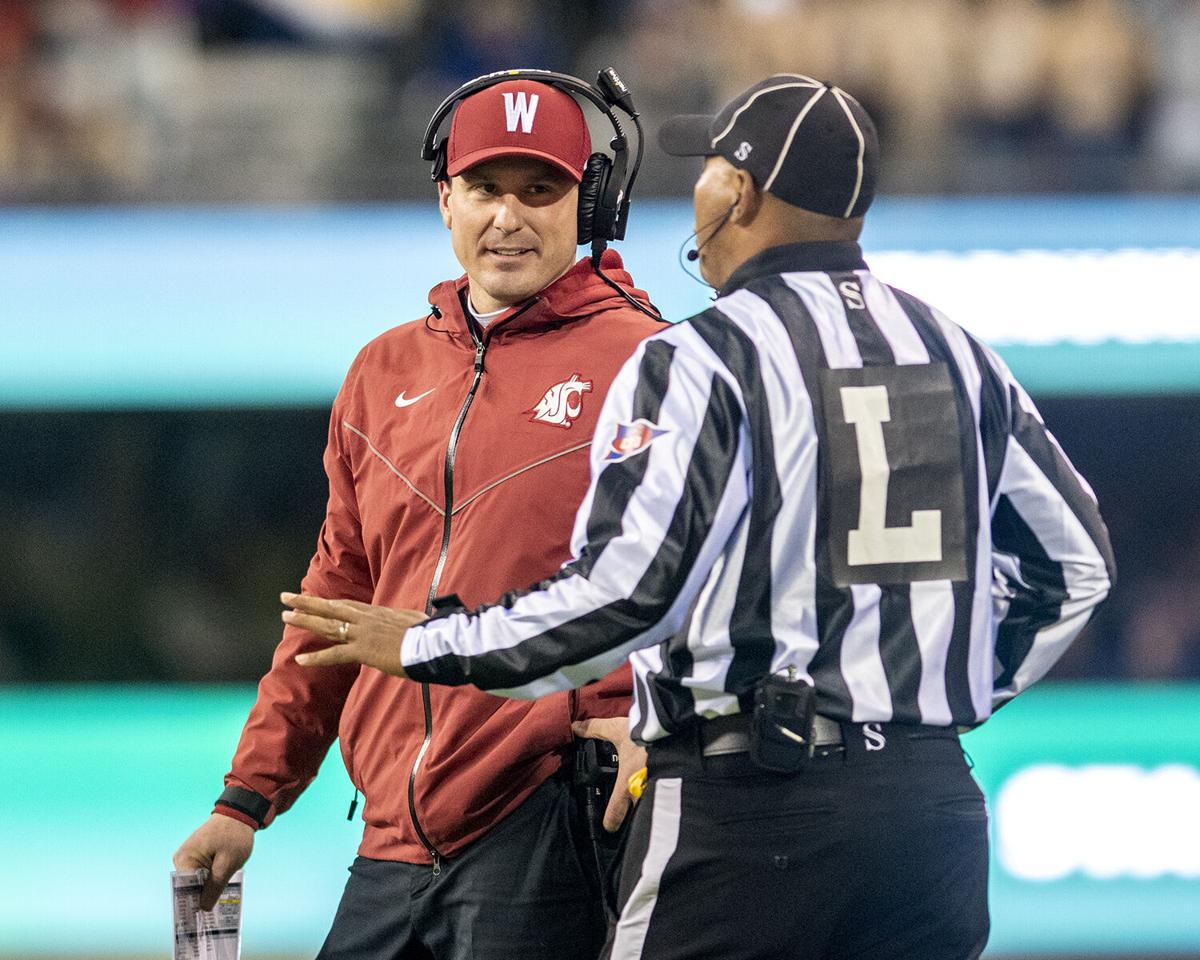 Jake Dickert led Washington State to its first Apple Cup victory since 2012. His reward was being named the permanent head coach of the program Saturday.

Jake Dickert receives a hug after Washington State beat Washington in the 113th Apple Cup on Friday at Husky Stadium in Seattle. Dickert was named the permanent head coach of the football program Saturday, agreeing in principle to a five-year contract.

Jake Dickert led Washington State to its first Apple Cup victory since 2012. His reward was being named the permanent head coach of the program Saturday.

Jake Dickert didn’t score an extra football game for his team Saturday, but he scored a new job title.

The Washington State defensive coordinator, who has served as the Cougars’ interim coach the past five games, was named head coach on a permanent basis, hours after the team’s unlikely bid for a Pac-12 North title had been thwarted by a game result in Oregon.

Dickert’s promotion was reported by multiple outlets before WSU confirmed it with a news release at about 8 p.m., saying the coach has agreed in principle to a five-year contract. A news conference will take place this coming week.

“We are thrilled to have Jake Dickert step into the head coaching role,” school president Kirk Schulz said in the release. “Coach Dickert was able to bring together a team that has been through so much in the past two seasons and inspire them to not only keep going, but to fight harder.”

Dickert, 38, was named interim coach Oct. 18 when WSU fired Nick Rolovich and four of his assistants for failing to comply with a state vaccination mandate. The Cougars have gone 3-2 since then, with an impressive upset win at Arizona State and their first Apple Cup victory since 2012, snapping a seven-game losing streak in the series.

“When we made a coaching change midway through the season, we needed to find a special leader to guide this program going forward, and we have found that with Jake,” WSU athletic director Pat Chun said in the release. “His ability to steady this program and keep it focused over the past six weeks has been very impressive. Jake has a championship mentality which has been on display since late October and we are fortunate to have him guiding Cougar Football for many years to come.”

Dickert won widespread praise for overseeing a smooth coaching transition, quickly replacing the departed coaches with a combination of in-house moves and outside hires. Five days after Rolovich’s firing, the Cougars made a credible showing in a 21-19 loss to a BYU team now ranked 13th nationally.

Dickert also has impressed in his defensive coordinator’s role this season, leading an undersized unit that has wreaked havoc on opponents’ passing attacks and held seven foes to fewer than 27 points. His coaching style is energetic, demanding and detail-oriented, and his manner with the media has been engaging and upbeat.

“I’m probably biased, because he’s my position coach as well as the D-coordinator, before he even stepped up to the interim head-coach role,” WSU linebacker Justus Rogers said after Friday’s 40-13 Apple Cup victory against Washington in Seattle. “I’m a big coach Dickert fan.”

This is the first head coaching role for Dickert, who grew up in Wisconsin and assisted at several small schools in the Midwest before getting his first Football Bowl Subidivison job in 2017 at Wyoming. He coached safeties there for one season before becoming defensive coordinator.

Rolovich hired him upon landing the WSU job in January 2020, and Dickert has said his familiarity with small-town life has made it a good fit for him.

“Coach Dickert loves Pullman, understands what it means to be a Coug, and, most importantly, puts his players first,” Schulz said. “He is an asset to this program, and to WSU.”

Dickert and his wife of a decade, Candice, have a daughter, Rylee, and two sons, Jett and Jace.

The Cougars’ 11th-hour bid for the Pac-12 North championship fell short when Oregon defeated Oregon State 38-29 earlier in the day at Autzen Stadium in Eugene, Ore.

The previous day, the Cougars had done everything in their power to claim that crown, thumping Washington.

The Cougs will cool their heels for a stretch and await their bowl invitation, having reached the six-win minimum for consideration by defeating Arizona two games ago. Bowl selection day is Dec. 5.

Oregon won the North with a 7-2 conference record, followed by WSU at 6-3 and Oregon State at 5-4. So the Ducks face South champion Utah in the league title game this Friday at Allegiant Stadium in Las Vegas.

A Beaver win against UO would have created a three-way tie atop the North standings, and the Cougars (7-5) would have claimed the title by virtue of their 4-2 record within the division.