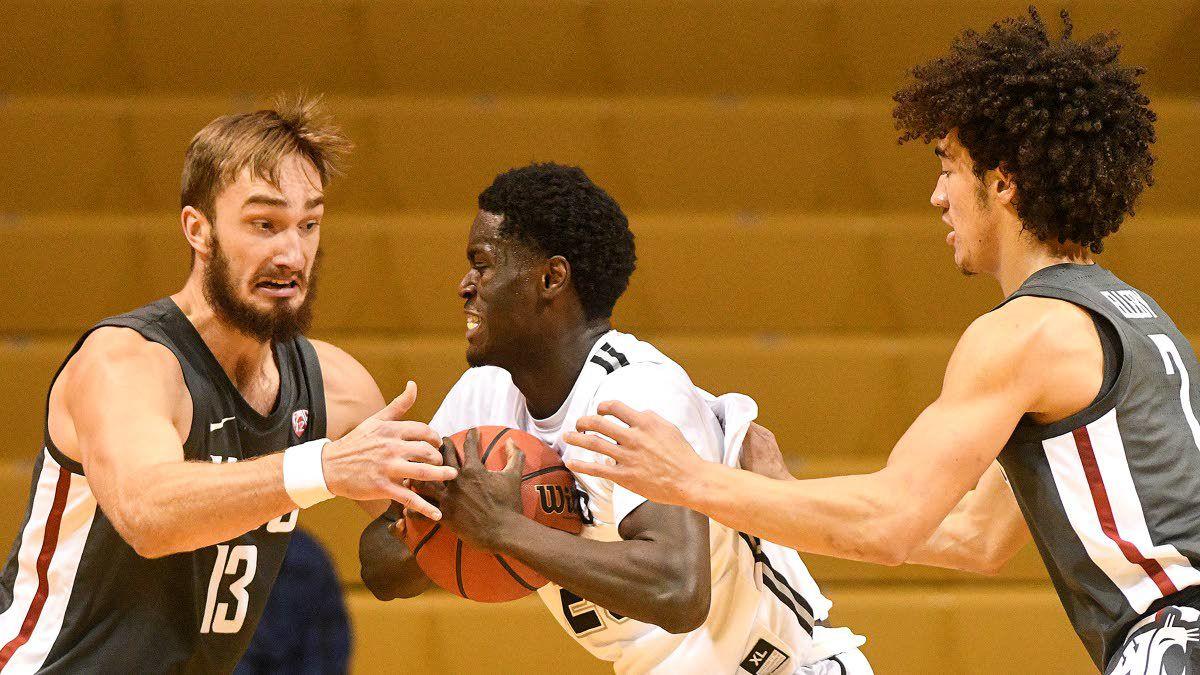 Washington State forwards Jeff Pollard (left) and CJ Elleby fight for a rebound with Idaho forward Babacar Thiombane (center) during the second half of a nonconference game Dec. 4 at Cowan Spectrum. The Cougars average 16.44 takeaways per game and are fifth in the country in turnover margin at plus-7. 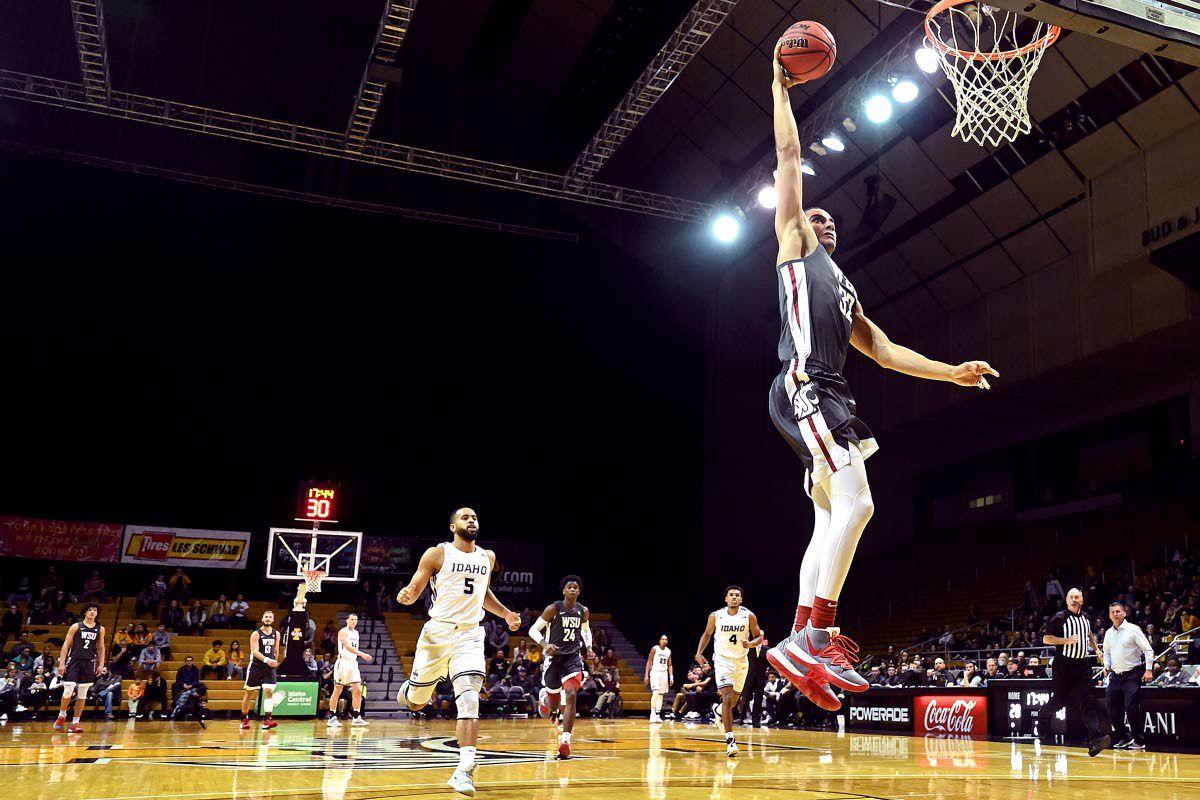 Tribune/Pete CasterWashington State forward Tony Miller (with ball) has 37 points and 12 rebounds in his past three games. 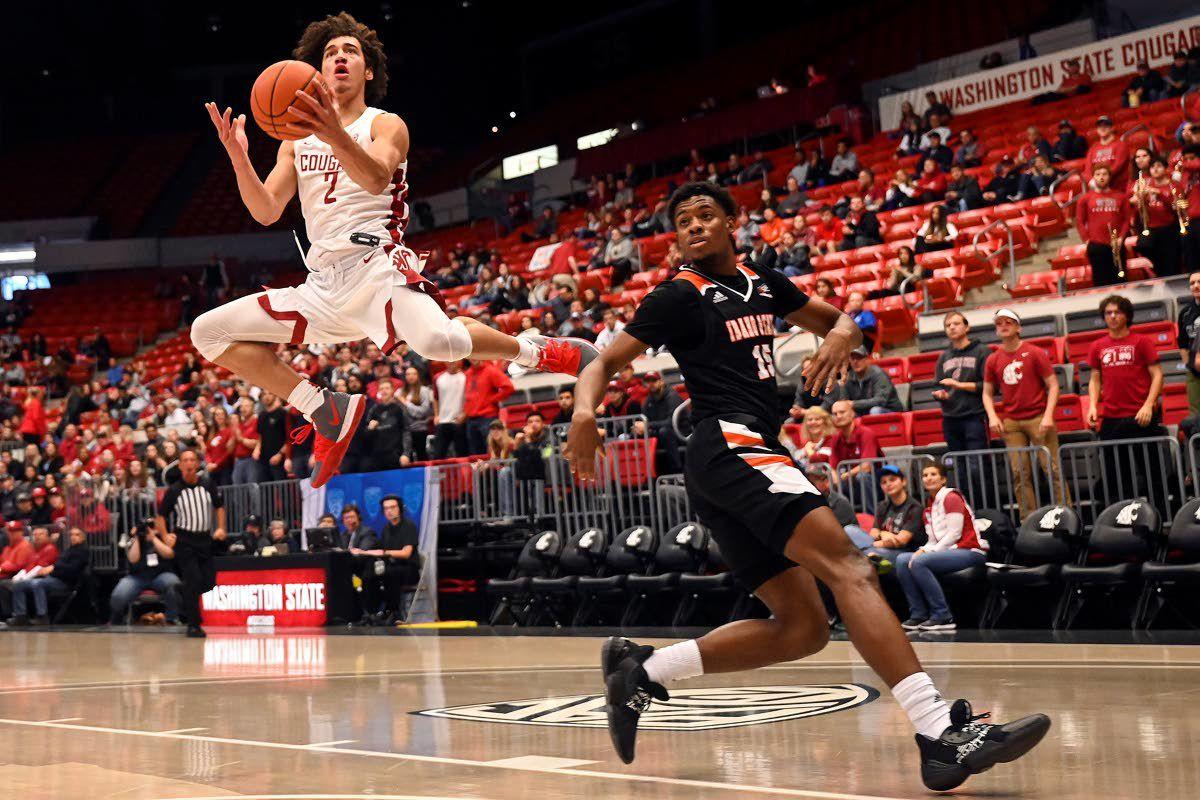 Washington State forward CJ Elleby (2) hangs in the air as he lets Idaho State forward Coreyoun Rushin (15) pass by on his way to a fast-break layup during the first half of a non-conference game on Sunday afternoon at Beasley Coliseum in Pullman.

Washington State forwards Jeff Pollard (left) and CJ Elleby fight for a rebound with Idaho forward Babacar Thiombane (center) during the second half of a nonconference game Dec. 4 at Cowan Spectrum. The Cougars average 16.44 takeaways per game and are fifth in the country in turnover margin at plus-7.

Tribune/Pete CasterWashington State forward Tony Miller (with ball) has 37 points and 12 rebounds in his past three games.

Washington State forward CJ Elleby (2) hangs in the air as he lets Idaho State forward Coreyoun Rushin (15) pass by on his way to a fast-break layup during the first half of a non-conference game on Sunday afternoon at Beasley Coliseum in Pullman.

PULLMAN — Surely, Washington State knows its wins mostly will be earned on the defensive end this season.

Cougars men’s basketball coach Kyle Smith has admitted that — like during his rebuilds at Columbia and San Francisco — offensive consistency tends to come incrementally when defense is the prime emphasis.

Smith’s seeing some of that again thus far.

“Defensively — being our mantra — we’re trying to get there, we’re not deviating from that,” Smith said, commending his team’s lockdown showings in its 78-65 win against Idaho last week, then signature 63-54 toppling of NCAA tournament mainstay New Mexico State on Saturday.

While the first-year Wazzu boss with a mind for basketball analytics has maintained “we’re playing a little better offensively,” he’s also accepted his Cougars’ grind-it-out defense has somewhat made up for an offense pained by hasty takes, haphazard passes and untimely giveaways.

It’s prompted Smith to coin a placeholder nickname ahead of WSU’s tilt at 1:30 p.m. Sunday with UC Riverside (Pac-12 Network).

“Instead of ‘Nerdball,’ (you) might wanna call it ‘Uglyball,’” he said, chuckling.

“We’re playing a little better offensively. Turning it over more than we have, but I think that’s a byproduct of trying to play the right way, with more purpose.”

WSU commits 9.4 giveaways per game, the fewest in the nation.

Long droughts have been crippling. So too has the lack of a true second scoring option behind 6-foot-6 super-sophomore forward CJ Elleby, whose 20.1 points per game rank third in the Pac-12.

Perimeter play, in particular, has been a strong suit of Wazzu’s defense. They often pick off errant swing passes, furnishing simple chances at the hoop and propping up an offense that has struggled to set itself up in the halfcourt.

The trend was evident in WSU’s previous two games, when it helped establish an edge the Cougar defense held in both second halves, despite the slow-developing offense and rough 3-point shooting.

“Our guards didn’t produce good numbers offensively, but man, we controlled (the NMSU game Saturday), and it started with the defense,” Smith said. “Our post play’s been good; we gotta go there more, gotta play through those guys more.”

Senior forward Jeff Pollard has added a slight level of consistency on both ends. He functions as WSU’s “quarterback of the defense,” he noted.

“Jeff is vanilla. He’s great, he does everything well, he’s so dependable,” Smith said after the win against the Aggies. “He’s fundamentally sound. He hits all the cliches for someone from Bountiful, Utah.”

Montana transfer forward Tony Miller is beginning to emerge as a bulky presence (6-6, 210 pounds) with a scoring touch. He’s poured in 37 points on 82.4 percent shooting and collected 12 rebounds in the past three games. He knocked in his first-career 3 against the Aggies.

“We like to have five guys out there that can make a 3,” Smith said. “That makes us really hard to guard.

“(Miller) can play some 4 and 5. I like that he’s settled in and given us a little scoring there.”

Casper College (Wyo.) transfer guard Isaac Bonton, the expected No. 2 scorer who was billed as a slasher and proficient long-ball threat in the preseason, is averaging 13 points per game, but is 12-of-51 from beyond the arc so far.

“We’ve had some injuries and illnesses in the backcourt,” Smith said. “We’re just still not steady out there.”

With former Pac-12 scoring champion Robert Franks beside him last year, Elleby was “Robin,” Smith said. He’s got to assume the “Batman” role now, which he’s done, maturing on defense and becoming more aggressive as a ballhandler.

Smith, who’s tasked Elleby with penetrating opponents’ paints, said his standout forward has improved on the glass, and with comfortability and facilitation.

“I have to remind myself that he’s 19,” Smith said. “When we talk about good scorers — get to the foul line, get offensive rebounds — I said, ‘That’s an area you need to be the guy offensively. We’re gonna play through you but you gotta find a way to do that.’”

Elleby said he’s being more vigilant on offense, and not rushing or shooting early in the shot clock, both of which were tendencies last year. Along with his top-three-league scoring spot, Elleby is 14th in the conference with 6.2 rebounds per game and fifth with 1.9 steals per game.

“I can pick my spots a little more and get my teammates going,” said Elleby, who tested the NBA draft waters in the spring but returned to hone himself. “That’s opened it up for me.”