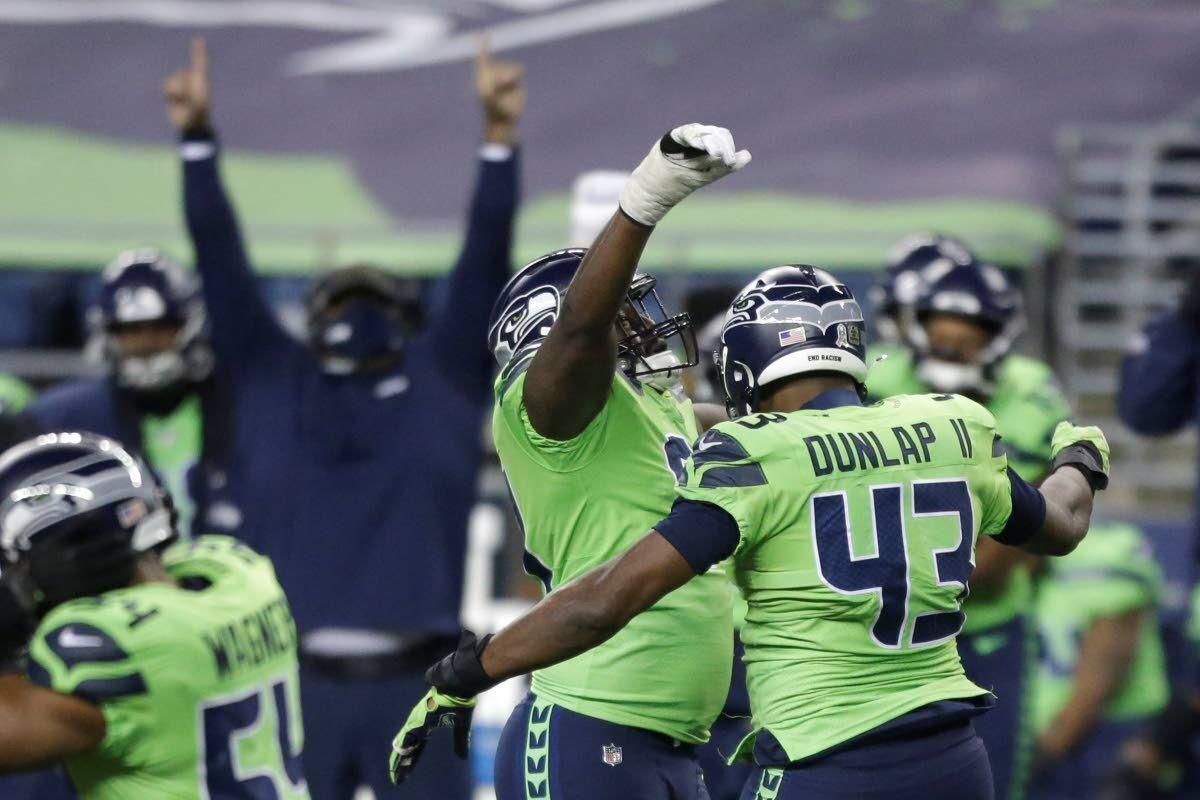 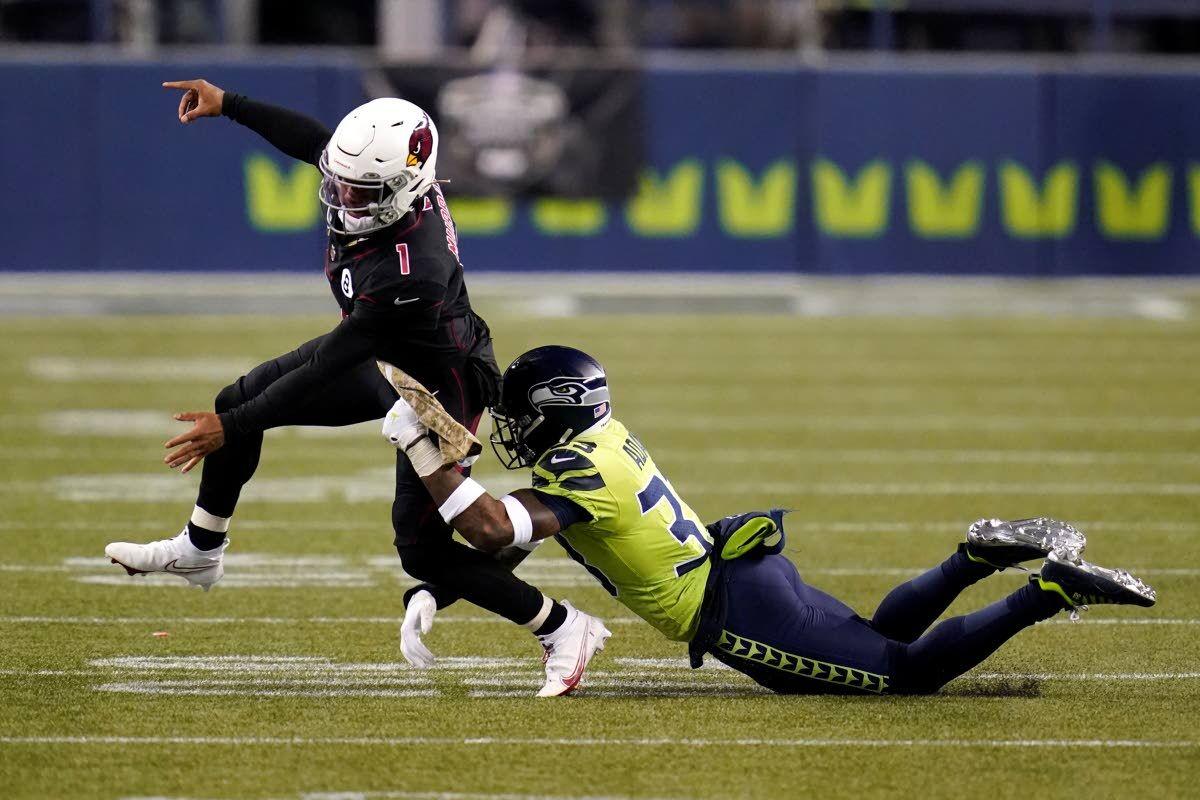 Seattle Seahawks strong safety Jamal Adams, right, gets to Arizona Cardinals quarterback Kyler Murray (1) just as Murray gets a pass off, during the second half of an NFL football game, Thursday, Nov. 19, 2020, in Seattle. (AP Photo/Elaine Thompson) 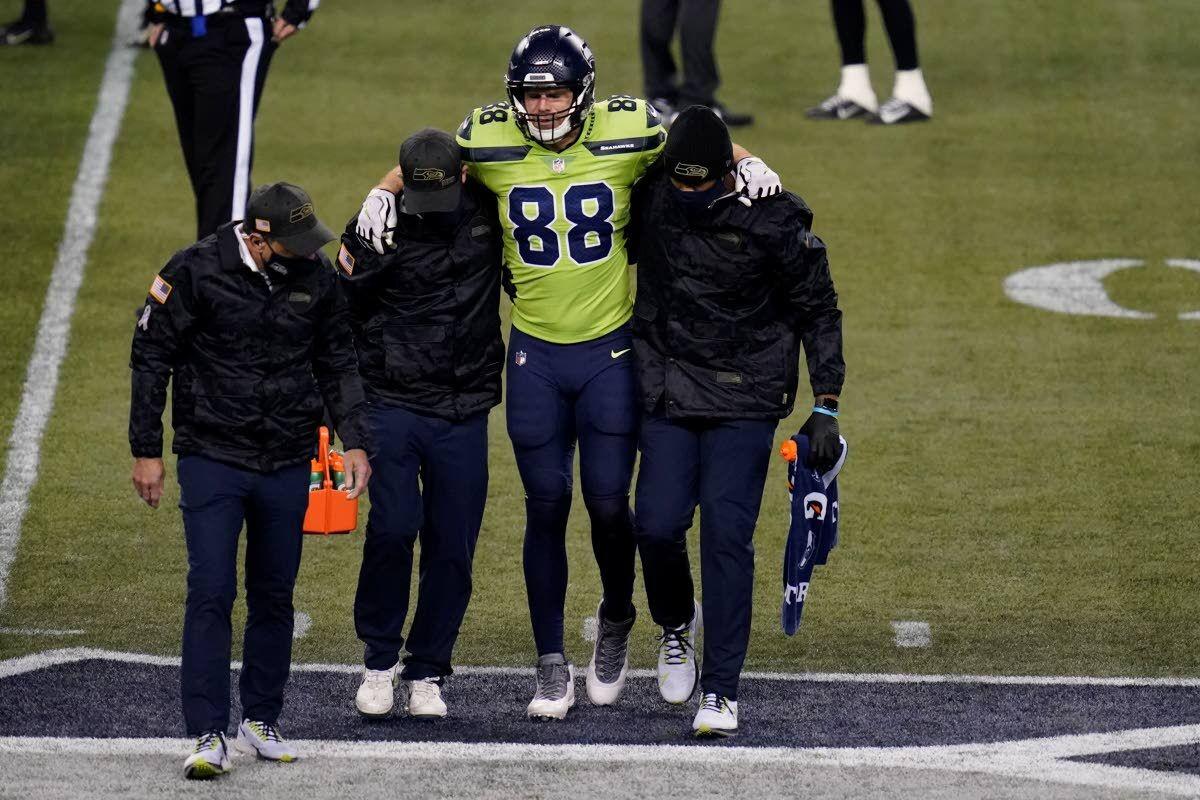 Seattle Seahawks tight end Greg Olsen (88) leaves the field with an injury during the second half of an NFL football game against the Arizona Cardinals, Thursday, Nov. 19, 2020, in Seattle. (AP Photo/Elaine Thompson) 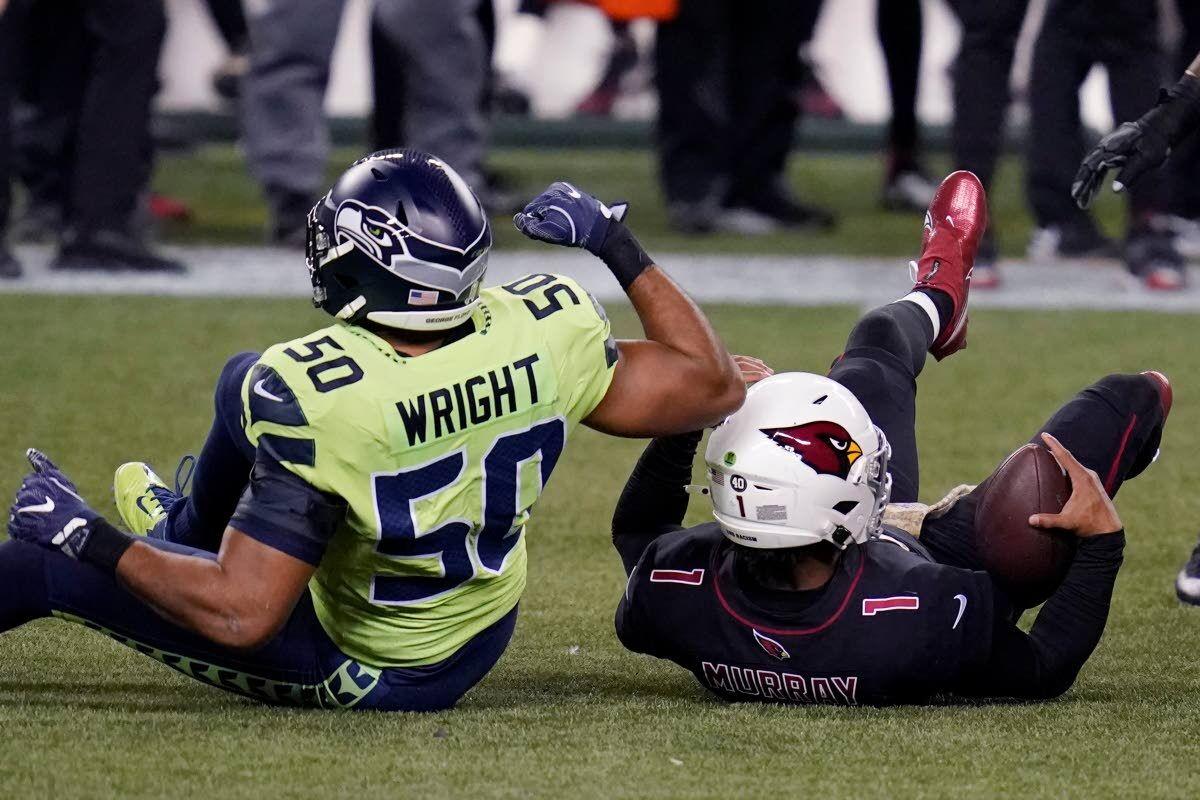 Arizona Cardinals quarterback Kyler Murray (1) is tackled by Seattle Seahawks outside linebacker K.J. Wright (50) during the first half of an NFL football game, Thursday, Nov. 19, 2020, in Seattle. (AP Photo/Elaine Thompson)

Seattle Seahawks strong safety Jamal Adams, right, gets to Arizona Cardinals quarterback Kyler Murray (1) just as Murray gets a pass off, during the second half of an NFL football game, Thursday, Nov. 19, 2020, in Seattle. (AP Photo/Elaine Thompson)

Seattle Seahawks tight end Greg Olsen (88) leaves the field with an injury during the second half of an NFL football game against the Arizona Cardinals, Thursday, Nov. 19, 2020, in Seattle. (AP Photo/Elaine Thompson)

Arizona Cardinals quarterback Kyler Murray (1) is tackled by Seattle Seahawks outside linebacker K.J. Wright (50) during the first half of an NFL football game, Thursday, Nov. 19, 2020, in Seattle. (AP Photo/Elaine Thompson)

SEATTLE — On the night before the game that might be a tipping point in their season, the Seattle Seahawks’ defense held a meeting of accountability.

The defense, once the envy of the NFL, had become a punchline this season. Ken Norton Jr., the coordinator, was tired of it. So one by one, Seahawks defenders went through aspects of their base defense and each player recited his responsibilities.

A simplistic idea, but with a productive result.

“It was a remarkable meeting of accountability. Guys were great and that means they’ve learned really well,” Seattle coach Pete Carroll said Friday. “Instead of the coaches saying it, the players were saying the stuff and talking about assignments and all, and it was just a real nice step forward. But it was powerful in a way.”

While one meeting wasn’t a cure, it certainly appeared to help. Seattle (7-3) turned in its best defensive performance of the season in Thursday’s 28-21 win against the Arizona Cardinals. Seattle snapped a two-game losing streak and avoided losing three in a row for the first time since 2011.

After being the weakest link to a potential championship team, Seattle’s defense finally held its own with a focused, disciplined performance. The Seahawks held the best run team in the NFL to 57 yards rushing. They sacked Kyler Murray three times. They held DeAndre Hopkins to five catches despite playing with two backup cornerbacks.

Coupled with an offense that saw Carlos Hyde run for 79 yards and take some pressure off Russell Wilson by providing balance, the Seahawks rediscovered what for them has been a traditional method of winning. It’s also one that would serve them well moving forward into the final stretch of the regular season.

“We always have this growth and this trajectory of continuing to grow and get better,” Wilson said. “I think that the exciting part for us is that we all sense that, we all feel that and we can control that too.”

WHAT’S WORKING — Don’t look now, but Seattle has a pass rush. Really. The biggest defensive worry coming into the season might have been solved. Including the three sacks of Murray, the Seahawks have 13 sacks in the past three games after having just nine over the first six games.

The addition of Carlos Dunlap has been a massive boost. Dunlap had two sacks against Arizona.

“We think the sky is the limit,” Dunlap said. “We continue to get guys back healthy and get in rhythm.”

WHAT NEEDS HELP — The Seahawks were quick to credit rookie Damien Lewis for jumping in at center for the first time at any level of his football career. But it had its rough moments, including a sack on the first play, a muffed snap and a key holding call. Lewis is exceptional at right guard and should be back at his normal spot in Week 12 with Ethan Pocic expected to return after missing two games due to a concussion.

STOCK UP — Defensive end L.J. Collier had two significant plays. Collier was responsible for Seattle’s first sack on Murray in the first quarter, and the quarterback seemed bothered by his right shoulder the rest of the night. But it was Collier’s play in the fourth quarter that change the tenor of the game. With Arizona backed up near its goal line, Collier beat former Seattle lineman J.R. Sweezy with a quick inside step. Sweezy was flagged for holding in the end zone and the safety gave Seattle a 25-21 lead. By the time Arizona touched the ball again, it was 28-21.

STOCK DOWN — Seattle’s vaunted fans. Yeah, it’s strange to say so, but the Seahawks are 5-0 this year at home without any fans in the seats. They were 4-4 last season. The Cardinals also committed four false start penalties in the empty stadium.

Seattle will be heavily favored in its next two home games against the Giants and Jets, before closing out the home slate against the Rams. Seattle hasn’t gone unbeaten at home since 2012.

INJURIES — Seattle likely lost tight end Greg Olsen for the rest of the regular season due to torn plantar fascia in his left foot. Carroll said the timeline is likely four to six weeks that Olsen would miss. The Seahawks also are uncertain the severity of the sprained ankle suffered by right tackle Brandon Shell in the fourth quarter.

But for the most part, Seattle is on the verge of getting healthy. Starters Pocic, running back Chris Carson and cornerback Shaquill Griffin are all expected back against Philadelphia. And there could be more reinforcements coming soon with rookie defensive end Darrell Taylor and running back Rashaad Penny possibly returning in December from long-term injuries.

KEY NUMBER — 93: Wilson won his 93rd game, moving past Peyton Manning for the most wins by a quarterback in the first nine seasons of his career.

WHAT’S NEXT — Seattle gets an extended break before entering the softest part of its schedule Nov. 30 at Philadelphia. The expectation will be for the Seahawks to sweep the next four games against the Eagles, the two New York teams and Washington, who have a combined 8-28-1 record entering this week.