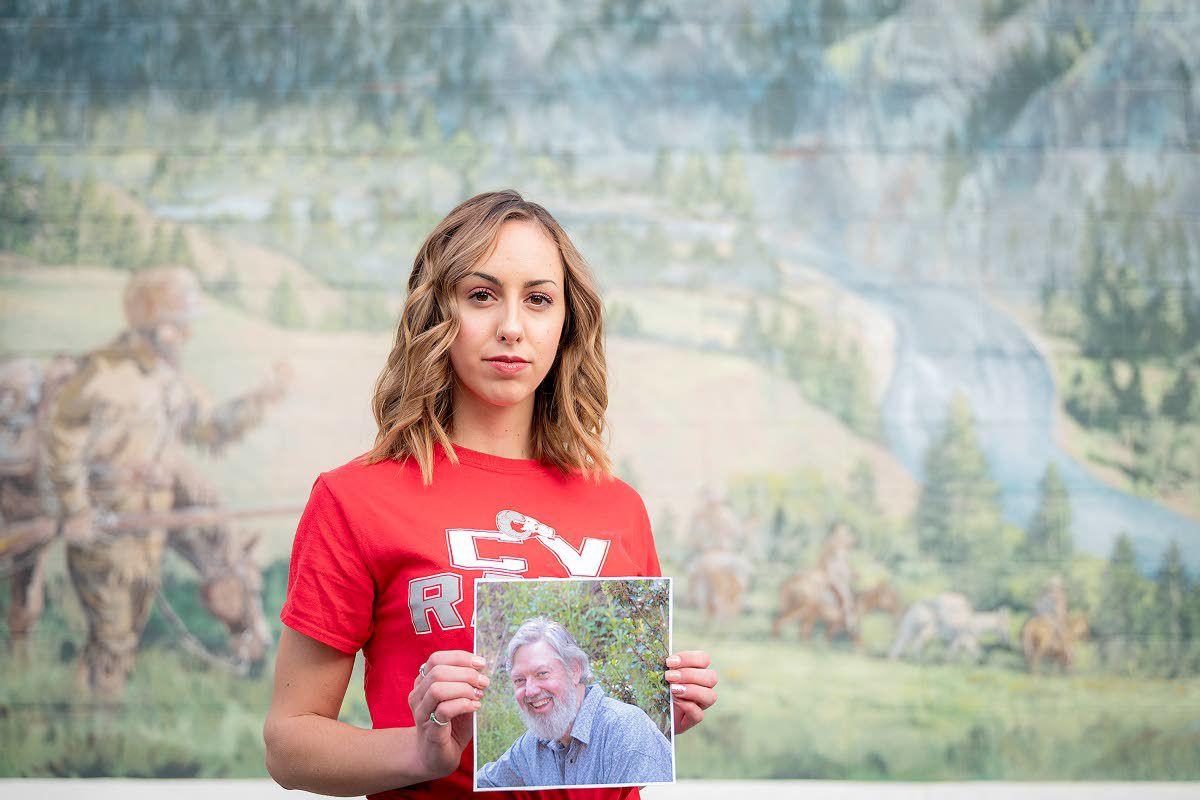 Pete Caster/TribuneMelanie Gianopulos, 18, a senior at Clearwater Valley High School, holds a picture of her father, Timothy, in downtown Kooskia on Wednesday. Timothy died of congestive heart failure on Sept. 12, 2019. Melanie has organized a fun run in his memory and to raise awareness and funds to help patients with congestive heart failure at St. Mary’s Hospital in Cottonwood. The Run With Your Heart 1.6-mile fun run, for competitors of all ages, starts at 10 a.m. Saturday at Clearwater Valley High School in Kooskia. 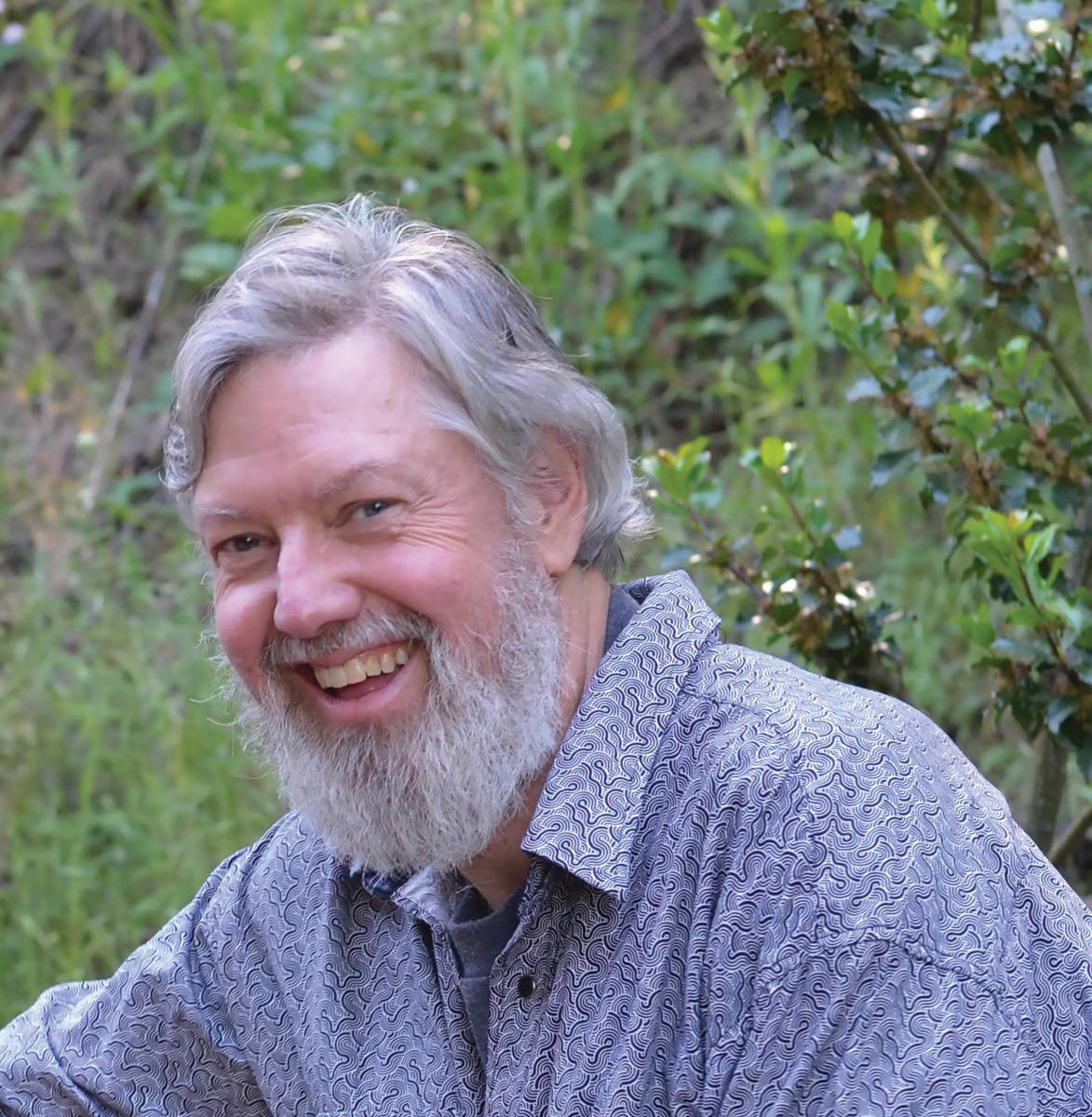 Pete Caster/TribuneMelanie Gianopulos, 18, a senior at Clearwater Valley High School, holds a picture of her father, Timothy, in downtown Kooskia on Wednesday. Timothy died of congestive heart failure on Sept. 12, 2019. Melanie has organized a fun run in his memory and to raise awareness and funds to help patients with congestive heart failure at St. Mary’s Hospital in Cottonwood. The Run With Your Heart 1.6-mile fun run, for competitors of all ages, starts at 10 a.m. Saturday at Clearwater Valley High School in Kooskia.

Looking back, Melanie Gianopulos can only be grateful for last summer.

Her father had been diagnosed with a heart condition in April 2019, and his treatment required making periodic trips from the Gianopulos home, in the remote hills east of Kooskia, to St. Mary’s Hospital, on the Camas Prairie in Cottonwood.

Melanie, a senior track and cross country athlete at Clearwater Valley High School, generally served as his chauffeur for those journeys during the summer, and they often would make a day of it, enjoying the scenery of north central Idaho and stopping for lunch and conversation.

Those memories are something she can cling to.

Timothy Gianopulos died of congestive heart failure at their home in September at the age of 60. The next several weeks were indescribably difficult for Melanie, she said, but her love of running helped her cope.

As a tribute to her father and what she calls the pursuit of “heart health,” she will conduct an approximately 1.6-mile fun run on Saturday at the Clearwater Valley campus, the culmination of her senior project at the school. It’s called “Run With Your Heart,” and proceeds will go to the cardiac rehabilitation center at St. Mary’s Hospital.

“I knew from my freshman year I wanted to do a fun run as my senior project,” she said this week. “But after my dad passed away, I knew I wanted to make this project in honor of him. So that’s why I’m having all the proceeds go toward St. Mary’s. That place really made an impact on me.”

Timothy, together with his wife, Cherylee, had been a big supporter of Melanie’s career as a distance runner. The youngest of their children will head into track season as a three-time defending district champion in the Class 1A girls’ 3,200 meters, and she placed third in the Idaho 1A cross country meet in 2017. On Sunday, she signed with the cross country and track program at Lewis-Clark State.

“Melanie’s parents were always at the finish line waiting for her,” CVHS assistant track coach Lara Smith said. “So as a track community in Kooskia, we were all heartbroken at his loss. You kind of wondered, as a senior athlete – you don’t know what they’re going to do. They’re all kids. But I’m really proud of her for putting this together as a senior project.”

Cross country in the fall already had been a challenge for Melanie because of an ankle injury — she had stepped on a loose stone during a workout — that derailed her progress early in the season.

As with many heart patients, Timothy’s prognosis had been hard to define, and his death Sept. 12 caught the family by surprise. It was Melanie who discovered the body that morning before school, because she’d wanted to say good morning and ask to borrow the car. She describes feeling a numbness the rest of the day, and her grief wound up taking a slow, unpredictable path. At a cross country meet in Troy, exactly a month after her father’s death, she broke out in tears during the race and didn’t know how to stop them. Accustomed to leading the pack, she was passed late in the race by runners she’d never seen before. She placed 12th.

Her grades, too, began to slip. Although she never sought counseling, she said depression isn’t too strong a word for what she was experiencing.

“I just didn’t feel motivated to do anything,” she said. “I was just dwelling on so many things I could have done with my dad — all the times he asked me to go on a hike or watch a movie or just do anything with him. I should have hung out with him, I should have asked more questions about his experiences in life. I should have tuned in more when he would tell us stories.”

Timothy Gianopulos, the son of a Greek immigrant, was born in New Jersey, grew up in Woodstock, N.Y., and met his future wife while both were visiting Mexico. They lived, among other places, on the Hawaiian island of Kaua’i and in Alaska before moving to Idaho two decades ago and launching a wood-reclaiming business, Ancestral Wood Products, which remains a going concern after Timothy’s death.

Their eldest two children played basketball at CVHS, but Melanie gravitated to the more individual pursuit of distance running. Her parents, although unfamiliar with the sport, wound up being enchanted by it. Melanie remembers holding a comfortable lead in a cross country race and seeing her dad staked out at a juncture of the course. He held out his arm, and she gladly slowed down slightly to high-five him. A coach later scolded her for giving up valuable seconds, but she’d won the race.

“I think some people could feel her pain and thought maybe the best thing was to take some time off from running,” Cherylee said. “And I never thought that. It wasn’t about winning. When you work hard — chop a lot of firewood — you’re doing something. You can think while you’re doing these things, right? You can process. If you just sit in your room and get depressed because you lost a loved one, does that help you more? Or does it help you more to do something that you love, and your dad loved watching you do? We all work through emotion and loss in our own way, but I think the running helped her.”

Toward the end of the season, Melanie began to get on top of her grief. Her academics picked up (she has a grade-point average of 3.26), and she qualified for the state meet for a third consecutive year, placing 24th.

“I don’t feel like I’ll ever be ready to move on,” she said. “but I’m starting to find a way to cope with the pain. Good supportive friends have helped me, and especially my family.”

Organizing the fun run has been part of her self-prescribed therapy. Naturally, the project is rife with details she might not have anticipated, but she persuaded Freedom Northwest Credit Union in Kooskia to provide 100 bottles of water for contestants, and she recruited other sponsors as well.

She initially wanted to stage the run near Heart of the Monster, the geological feature at the Nez Perce National Historical Park, but she was denied permission out of safety concerns. But she seized on another way to reinforce her “heart” theme — by scheduling the run the day after Valentine’s Day.

“The reason I’m doing this,” she said, “is I hope it will encourage people to stay healthy, take care of your loved ones and cherish the times that you have with them.”