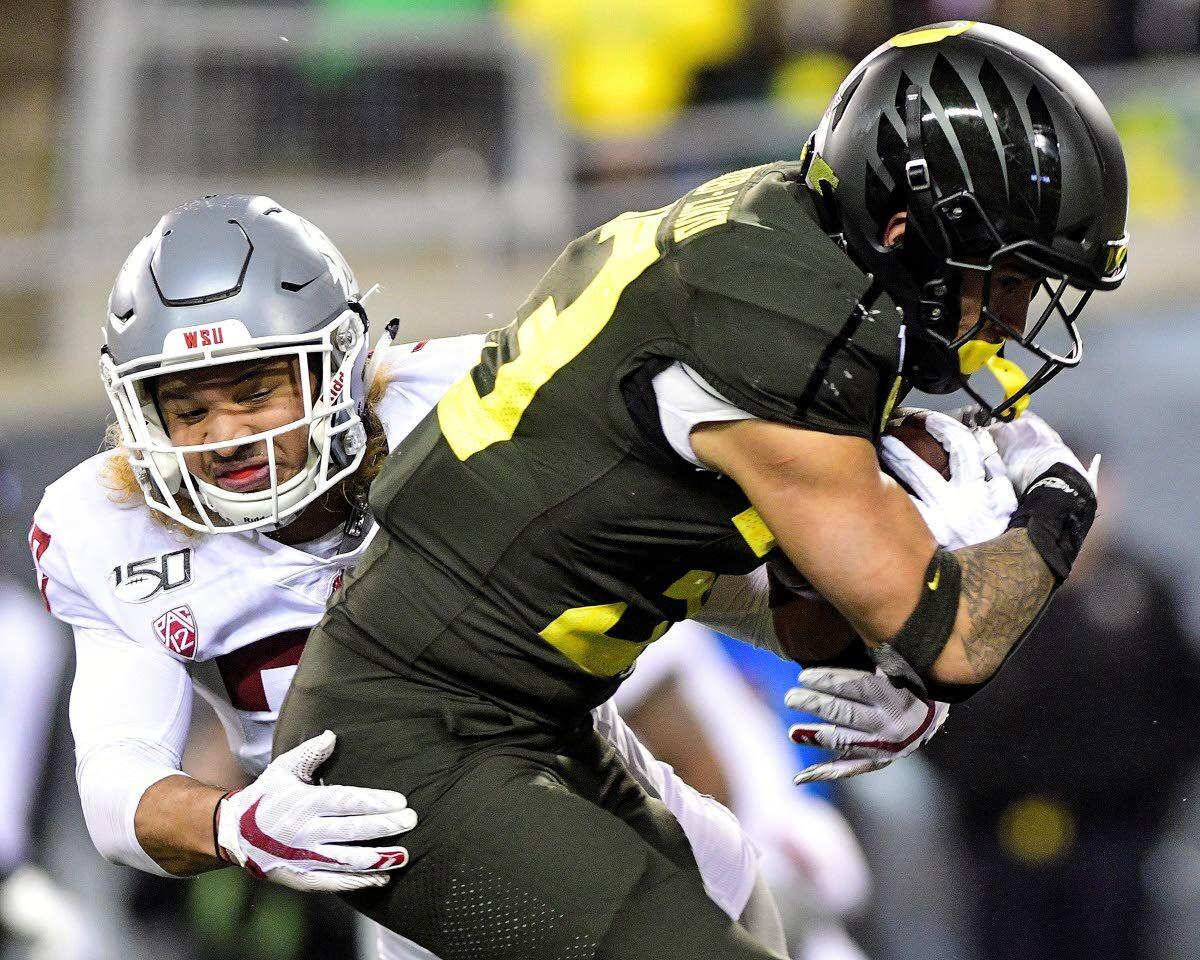 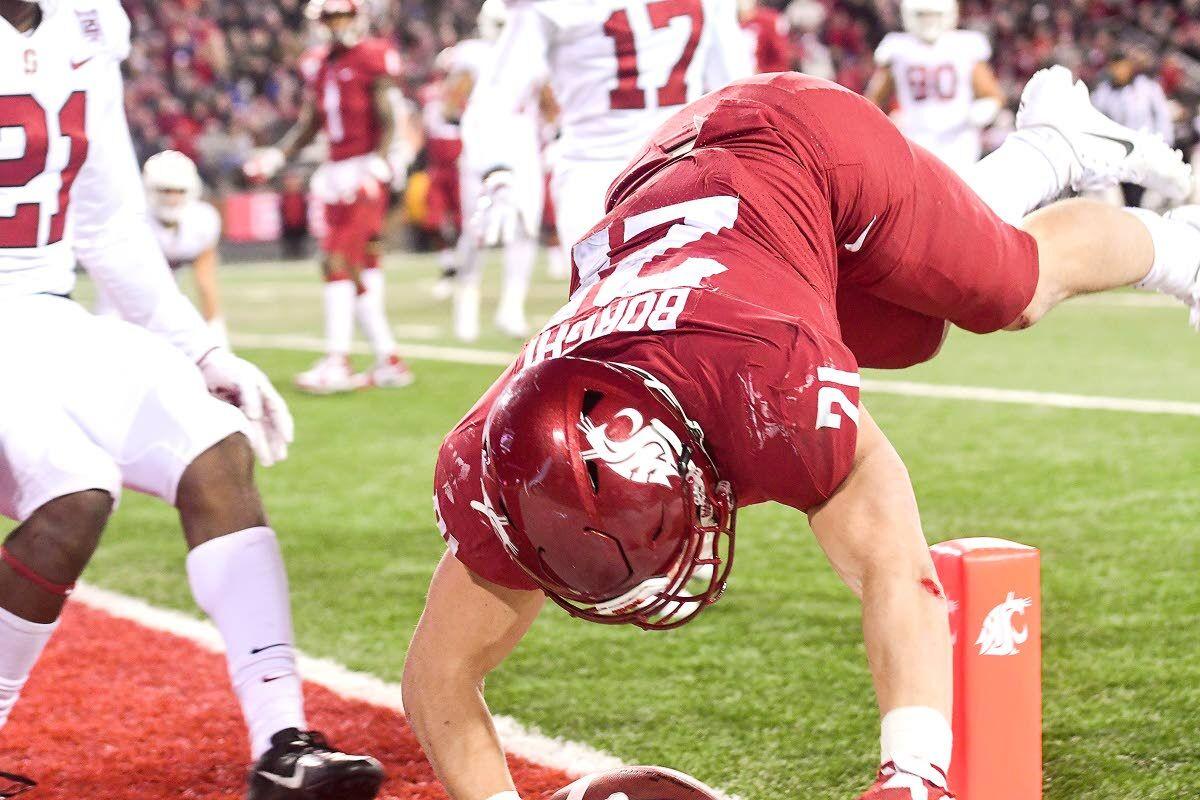 Washington State running back Max Borghi dives over the pylon and into the end zone for a touchdown in the fourth quarter of a 2019 Pac-12 Conference game against Stanford. Borghi and the Cougars will face Utah in the opening game of the 2020 season Sept. 26 after the conference announced the schedule Friday.

Washington State running back Max Borghi dives over the pylon and into the end zone for a touchdown in the fourth quarter of a 2019 Pac-12 Conference game against Stanford. Borghi and the Cougars will face Utah in the opening game of the 2020 season Sept. 26 after the conference announced the schedule Friday.

On one hand, Washington State and its first-year coach open the season with two home games. On the other hand, those games are against the defending divisional champions.

Nick Rolovich is just grateful for an influx of clarity as he tries to steer a course for a college football program in the face of the coronavirus pandemic.

The Pac-12 announced a revised schedule Friday that has the Cougars starting with home games Sept. 26 against Utah and Oct. 3 vs. Oregon.

The 10-game, conference-only schedule scrambles the Cougars’ original Pac-12 slate and adds an extra opponent, USC, in a game to be played Nov. 7 in Los Angeles. The league already had canceled nonconference games, and the new starting date for all teams, Sept. 26, is almost a month later than usual.

As with all football schedules across the nation, the Pac-12 revision is contingent on state-by-state restrictions and the arc of the pandemic in the coming weeks. At this point, there’s no plan to allow fans at the games.

If games need to be postponed because of the virus, they can possibly be rescheduled for bye weeks or the weekend of the Pac-12 championship game, Dec. 12-13.

“I’m just glad there’s a schedule out, so we can kinda start moving forward,” Rolovich said in a video conference.

The WSU schedule includes five home games. In addition to the early-season tests against defending South champion Utah and North champ Oregon, the Cougs host California on Oct. 17, Arizona State on Nov. 14 and Washington on Nov. 27 — another in a recent spate of Friday versions of the Apple Cup.

Rolovich issued no complaints about the schedule, but he acknowledged the difficulty of opening against Utah. Hired in January, he faces the challenge of implementing new offensive and defensive systems without the aid of spring drills, which were scotched by the pandemic.

He noted an increased importance of identifying areas of emphasis in order to develop particular strengths. In the Utes, the Cougs face the longest-tenured coach in the league, Kyle Whittingham, entering his 17th year.

“Very physical football team, a well-coached football team,” Rolovich said. “They’re going to be sound on fundamentals, they’re going to have toughness. I know they’ve got some positions to replace, but there have been systems in place, at least on defense, for a while, and their culture has been set.”

The Cougars last week began mandatory individual workouts and on Monday plan to enter the special two-week phase introduced by the NCAA to try to offset the loss of spring drills.

During that phase, teams are allowed 20 hours per week of walkthroughs, weight training, conditioning and film study. Rolovich plans to split his team into two offensive and two defensive groups for these sessions.

He said he hasn’t been told when conventional preseason workouts — actual football practice, in other words — will be allowed. Normally, that phase would begin 29 days before season openers.

Rolovich complimented the resilience and patience in recent weeks of his players and the league.

“It was pretty amazing to be a part of,” he said of the rescheduling process, “and I think the conference did a really nice job. I thought there was a good amount of camaraderie and honesty in the room when we talked about scheduling.

“We had many drafts as things started changing, and I think our guys have started getting prepped for five different (season-opening) teams during the summer, just because of how things were looking.”