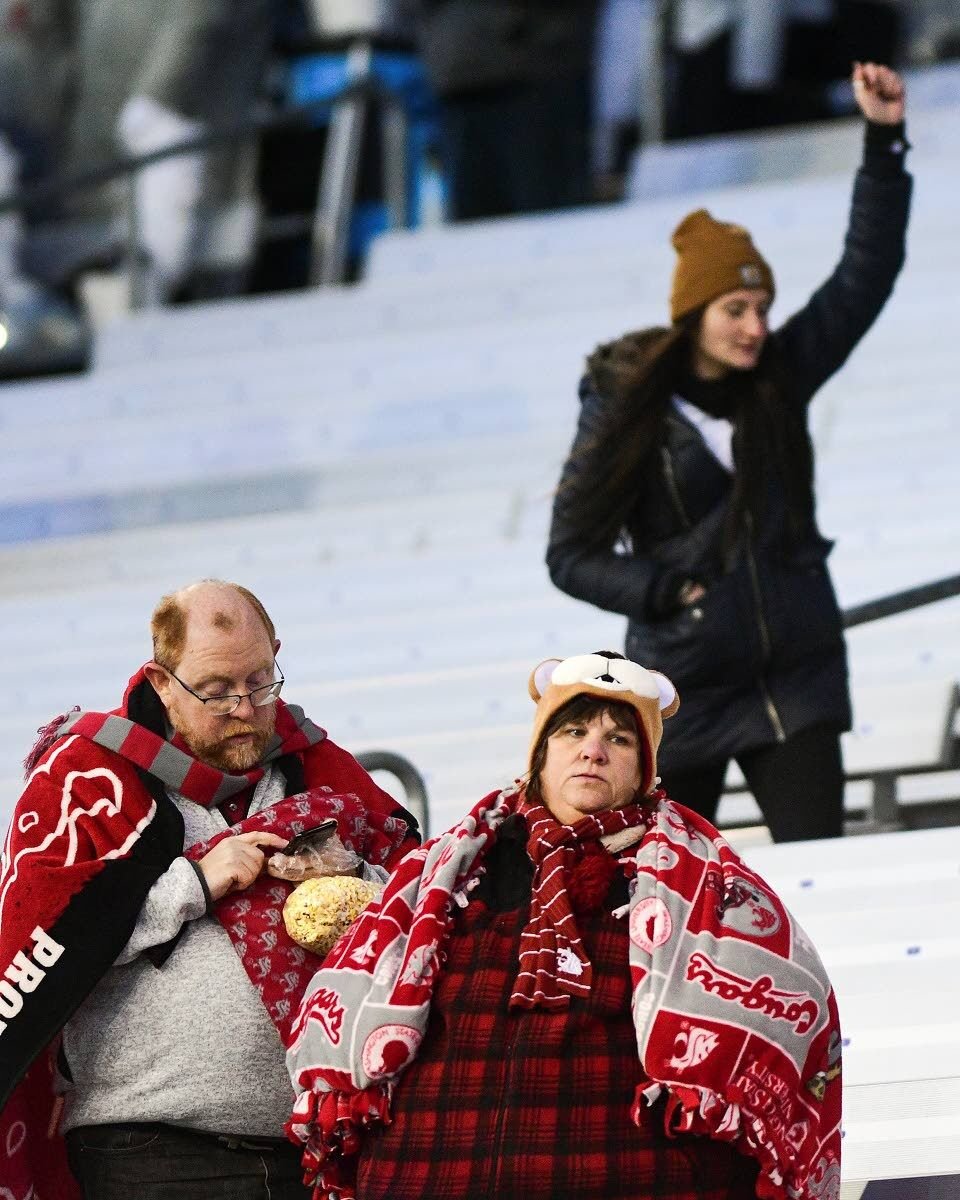 A pair of Washington State fans stand in dismay after the Cougars lost to Washington for the seventh consecutive time on Nov. 29, 2019. 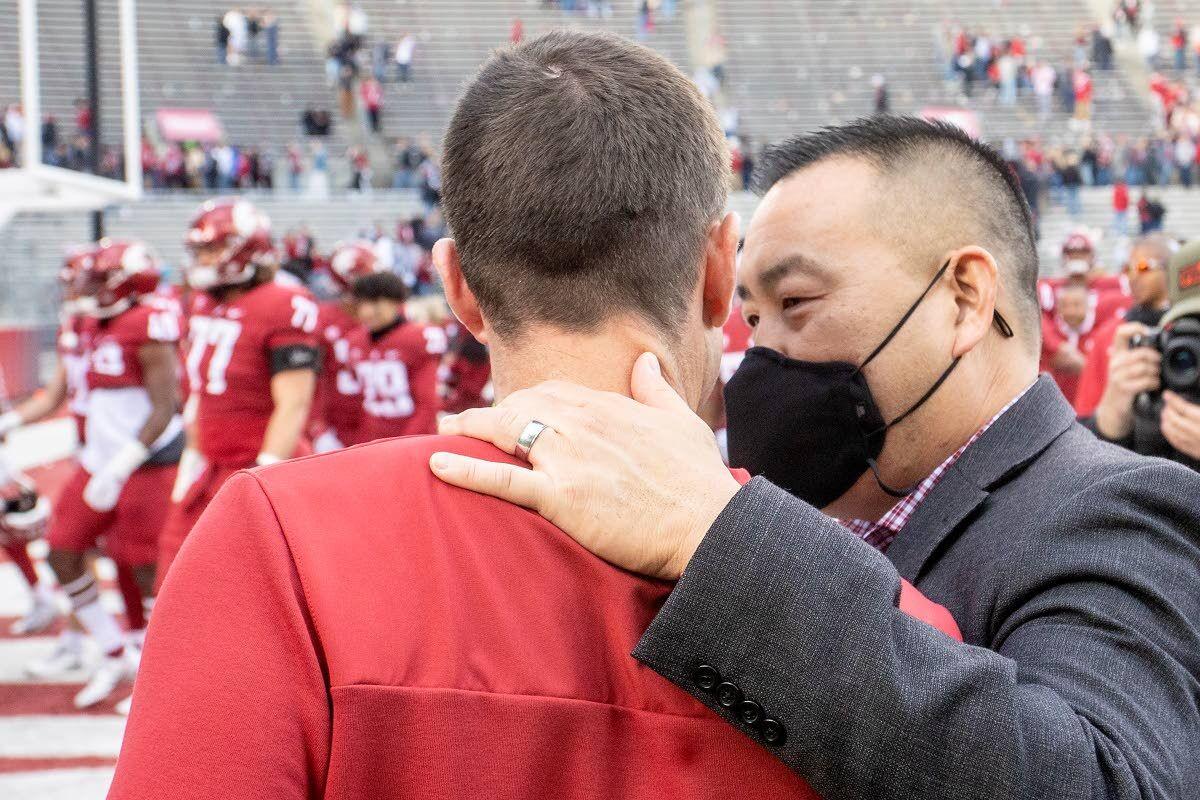 Washington State athletic director Path Chun, right,  talks to interim coach Jake Dickert after an Oct. 23 nonconference game against BYU at Gesa Field. The Cougars look to break a seven-game losing streak to Washington when the teams play in the 113th edition of the Apple Cup at 5 p.m. today at Husky Stadium in Seattle.

A pair of Washington State fans stand in dismay after the Cougars lost to Washington for the seventh consecutive time on Nov. 29, 2019.

Washington State athletic director Path Chun, right,  talks to interim coach Jake Dickert after an Oct. 23 nonconference game against BYU at Gesa Field. The Cougars look to break a seven-game losing streak to Washington when the teams play in the 113th edition of the Apple Cup at 5 p.m. today at Husky Stadium in Seattle.

The way Washington State players and coaches are viewing it these days, breaking their Apple Cup hex isn’t about game-day or game-week effort.

“If you want to win rivalry games,” Cougars interim football coach Jake Dickert said this week, “there’s got to be a greater commitment. We’ve got to be committed daily to ‘What are we doing to try to win this game?’ And not just game week. What are we doing 365 days a year to compete?”

With last year’s game in Pullman getting canceled because of the pandemic, the Cougars’ frustrations have been festering for two years since their 31-13 loss at the University of Washington in 2019, which nudged their losing streak in the rivalry to seven in a row.

They’ll try to vent the frustrations today in the 113th Apple Cup, pitting a resurgent Cougar team vying for the Pac-12 North championship against a star-crossed Husky crew playing its final game of the season.

The contest will pit two interim coaches who unintentionally, and in different ways, symbolize an awkward football season on each side of the state.

At Washington State, Dickert took the reins Oct. 18 when Nick Rolovich and four of his assistants were fired for refusing to be vaccinated against the coronavirus. (It was Rolovich who introduced the idea of a yearlong commitment to the Apple Cup, but Dickert subscribes to it.)

At Washington, former WSU safety Bob Gregory was elevated Nov. 14 when Jimmy Lake was canned for various on- and off-the-field reasons.

“We’re all mercenaries anyway, as coaches,” Gregory said when asked if it’s awkward for a Cougar to be coaching for the other side, which he’s done since 2014. “Whoever pays us, and puts food on the table for our kids, that’s who we’re rooting for.”

With both interim coaches also serving as defensive coordinators, and enjoying success in those roles, it’s reasonable to expect a low-scoring game, a notion reinforced by a forecast calling for rain showers and temperatures in the 40s.

For the Cougars, that could mean more reliance than usual on running backs Max Borghi and Deon McIntosh, who proved their readiness by rushing for 139 and 73 yards, respectively, in a 44-18 home win last week against Arizona.

If their numbers are called a lot, it will be a stark departure for the Cougs, who never rushed for more than 85 yards in their seven consecutive Apple Cup losses under Rolovich’s predecessor, Mike Leach. They also never scored more than 17 points in those games.

When Wazzu quarterback Jayden de Laura does throw the ball, he’ll need precision and accuracy against a UW pass defense that statistically ranks No. 1 in the nation, led by cornerbacks Trent McDuffie and Kyler Gordon and nickelback Brendon Radley-Hiles.

The Huskies have been banged up at running back, but they can nonethless be counted on to run the ball a lot. Second-year freshman quarterback Dylan Morris has thrown 12 interceptions against 14 touchdown passes, and there’s speculation the Dawgs might instead start true freshman Sam Huard, son of former UW quarterback Damon Huard.

The Cougs have been disruptive to opposing aerial attacks, but starting safety Daniel Isom and backup cornerback Chau Smith-Wade are doubtful with injuries. So is the Huskies’ Cade Otton, a gifted tight end with Lewiston family ties.

With all the tumult in these programs, and with the Wisconsin native Dickert participating in his first Apple Cup, there hasn’t been the usual amount of rivalry reminiscing and cultural observations this week.

But Gregory did lip service to the latter.

“Everything is different,” he said, comparing UW to WSU. “We’re on the west side, they’re on the east side. Big school, small school.

“Pickup trucks vs Audis,” he continued, this time putting the Pullman reference first. “Beer vs. Champagne. Everything is different about this rivalry.”

The schedule includes two more chances for the Pac to damage its nonconference record.

No, it won’t be Rolo and Jimmy in the broadcast booth.

Cougar fans are donning orange for this one.

It’s never a good sign when the top story line is the job security of a coach who’s 7-4.

No. 5 Notre Dame at Stanford

Tough scenario for the Bears, who need to beat L.A. schools this week and next to become bowl eligible.