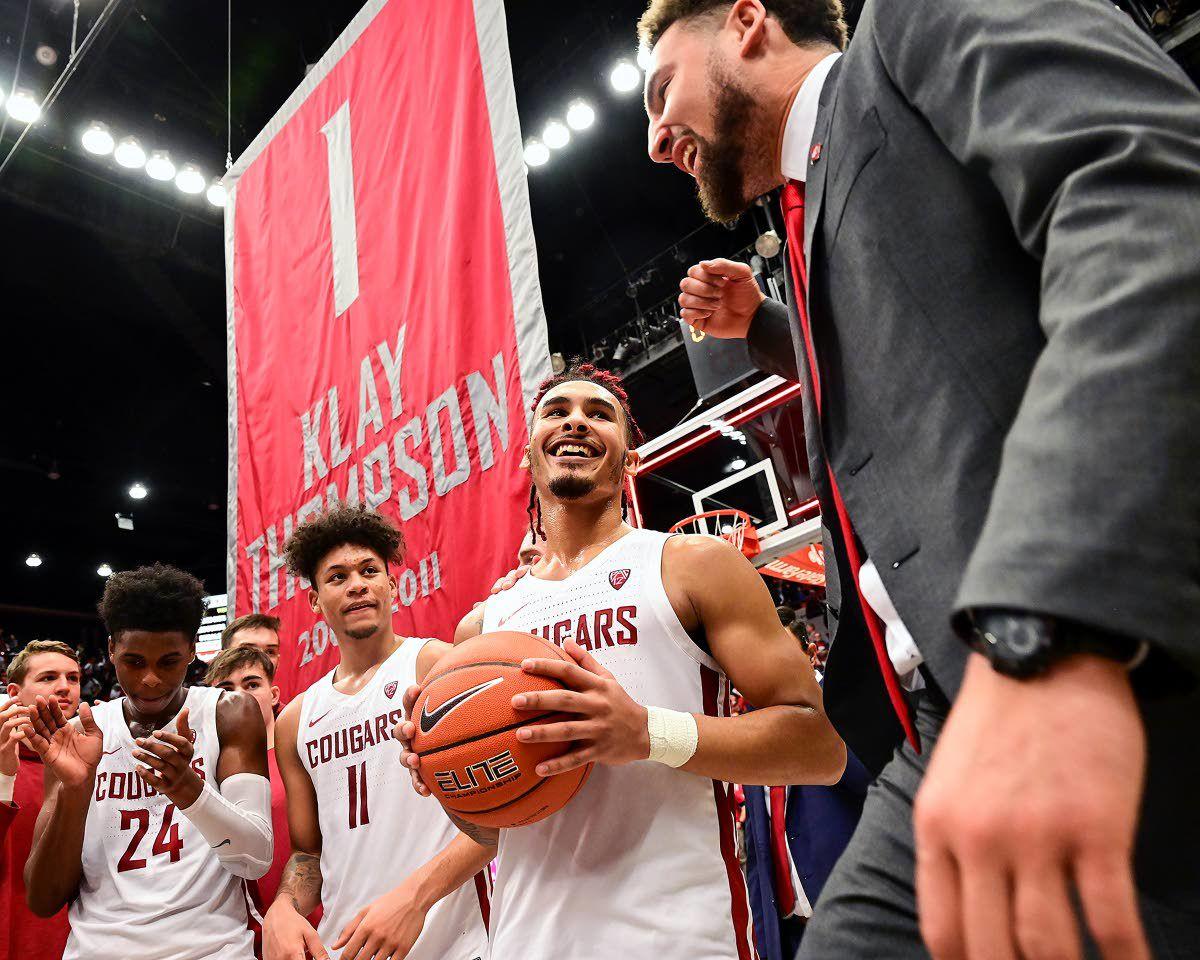 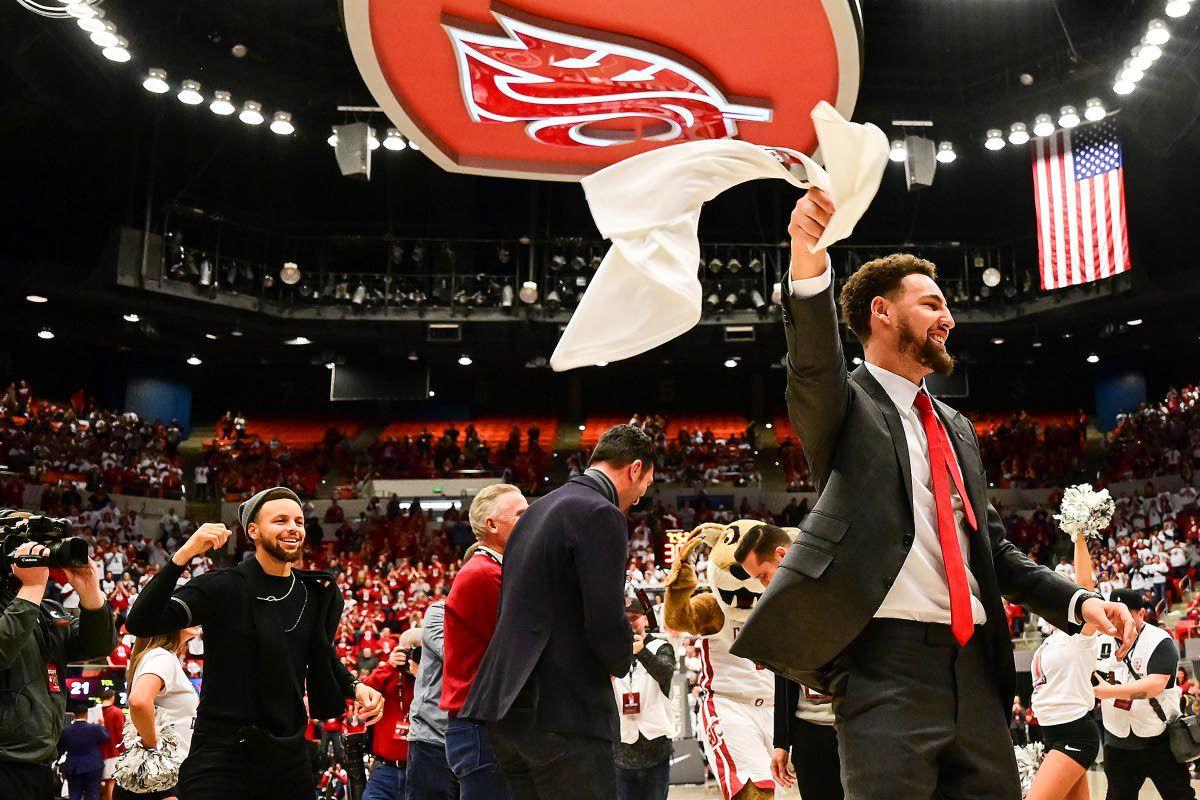 Former Washington State standout guard and current Golden State Warrior Klay Thompson (right) and his teammate Steph Curry (left) try to get the crowd excited during a break in the action in the first half of a Pac-12 Conference game on Saturday afternoon at Beasley Coliseum in Pullman.

Former Washington State standout guard and current Golden State Warrior Klay Thompson (right) and his teammate Steph Curry (left) try to get the crowd excited during a break in the action in the first half of a Pac-12 Conference game on Saturday afternoon at Beasley Coliseum in Pullman.

PULLMAN — It’ll be an image forever etched in the collective memory of the Washington State faithful — Klay Thompson kneeling on the Beasley Coliseum hardwood, his No. 1 painted on a massive crimson banner to his right and his lips planted on Friel Court’s crimson logo.

“I’m so grateful for where basketball’s taken me. It’s taken me to China, Brazil, New Zealand, Spain, around the world,” said Thompson, a five-time NBA All-Star, three-time world champion as a deft-shooting Golden State Warrior and a 2016 Olympic gold medalist. “But there’s nowhere like Pullman.

Thompson, WSU’s most celebrated alumnus (2008-11), had his uniform retired during halftime of his program’s eventual 89-76 win against Oregon State on Saturday. He joins Steve Puidokas (1973-77) as the only Coug men’s basketball players to have their numbers hang near the ceiling.

“Can’t believe that’s going to hang there forever,” he said.

Surrounded by relatives and friends, Thompson was energetic and emotional throughout the afternoon. He goaded the crowd of 10,380, which did its best to please him. Ironically, it was WSU’s largest draw since Thompson’s junior (and final) season, and the lot of attendees were donning Thompson memorabilia.

From the sideline, he provided fuel for his Cougars, whom he tirelessly cheered on after any positive possession. He appeared a die-hard fan in his support, sported a crimson and gray suit, and after the game, he took time to sign autographs for dozens of spectators.

“Being a Coug means you’re family,” Thompson said during a halftime news conference. “When I go worldwide and I hear ‘Go Cougs,’ it’s an immediate connection. The community here, the college experience, it’s rare to get.… Being a Coug is family, it’s loyalty, it’s friendship, it’s just having your brother or sister’s backs.”

During an impassioned speech at intermission, he thanked just about everyone he could think of, most of whom made the trip to the Palouse. He talked of his family, coaches, teammates, the “beautiful wheat fields” and former WSU boss Tony Bennett’s “vision” for the now-6-foot-7 guard who always takes the tougher defensive assignments.

He spoke on his initial visit to Pullman, during which he met with the 2007-08 Sweet 16 team, “a brotherhood,” he called it.

“When I saw that team, I wanted to be a part of that,” he said. “I saw what they did for the city, I saw the love they got from everyone.”

Thompson choked up a little, and said he gets “chills” in the arena because it reminds him of his late grandfather, Jerry, who passed away in 2017.

“I know my dad played in the league, but everyone always asks me where my competitive fire came from. It definitely came from my grandfather.”

Looking on a few steps away were Thompson’s parents, Mychal — a former second overall NBA draft pick in 1978 — and Julie. Brother Mychel stood beside them, as did Thompson’s girlfriend, actress Laura Harrier.

Fellow Warriors guard Stephen Curry, not a fan of the cold, attended on behalf of his longtime Splash Brother. Golden State executive (and Thompson’s former teammate) Zaza Pachulia, and Warriors owner Joe Lacob were also there. The Coliseum went loony upon their arrival.

“Steph’s like a brother to me, big brother,” Thompson said. “I look up to him so much, and for him to come out and show support means so much to me.”

A good half-dozen of No. 1’s former Cougar teammates came back home, too.

“No matter what uni I put on — hopefully a Warriors one for the rest of my career — I will always be a Coug,” said Thompson, who’s likely out for the season after sustaining an ACL injury in last year’s Finals against Toronto.

“Being in this kind of environment keeps you humble. Everyone’s the same, no one’s better than anyone else,” Mychal Thompson said. “That’s the attitude he’s had, being in a close-knit community like Pullman.”

“I remember when I was a junior, just itching to get to the league, but right when I left, I missed Pullman so much,” Thompson said. “I missed my friends, I missed being able to walk everywhere, go eat, live not a cheap life but actually my dollar went a long way. I just missed being a student.

“That’s what I told these young guys (WSU’s team), is just enjoy these moments, immerse yourself in the city and your team, and try to be as present as you can, ’cause it goes by like that.”

Thompson arrived in Pullman on Friday afternoon, then proceeded to retrace some teenage steps. He got a bite at Taco Del Mar, walked the “old halls of Bohler,” took a peek at his old dormitory and duplex, got nostalgic at the recreation center and toured the school’s new facilities.

He rooted on WSU’s women’s team that night. In the afternoon, he showed up to the Cougars men’s practice, and chatted it up with his successors and coach Kyle Smith, whom he’d endorsed for the Wazzu job last March.

“Once he showed up, practice was basically over,” Smith said. “... He’s a pretty unassuming, humble guy, and has no reason to be because he’s won three world championships and two gold medals (one for FIBA). I think he was really touched by the whole thing.”

From the crowd, to the ceremony itself and the several tribute videos — featuring Kerr, Bennett, Curry, Duke coach Mike Krzyzewski and others — Thompson said the day “surpassed all my expectations.”

After Bennett left Pullman for Virginia in 2009, Thompson “had to step into that spotlight, that main go-to-guy role” under new coach Ken Bone. He said Bone gave him the “green light” to direct the team. In turn, it made Thompson, the school’s No. 3 all-time scorer (1,756), “so much stronger.”

“They really believed in me from the jump.… I had so much help along the way,” said Thompson, who elected to enter the NBA draft after his junior year. He went 11th overall to Golden State, where he’s become a fan favorite as one of the NBA’s best-ever shooters, an all-defensive player, back-door cutting virtuoso and an elite in the clutch.

But “being the big man on campus in Pullman — there’s nothing better,” he quipped.

“It was just so much fun to have that ability to inspire people. I felt that before I even got to the NBA, playing on the Palouse. Especially to the people that live in Pullman, how much this institution means to them, that’s who I play for.”