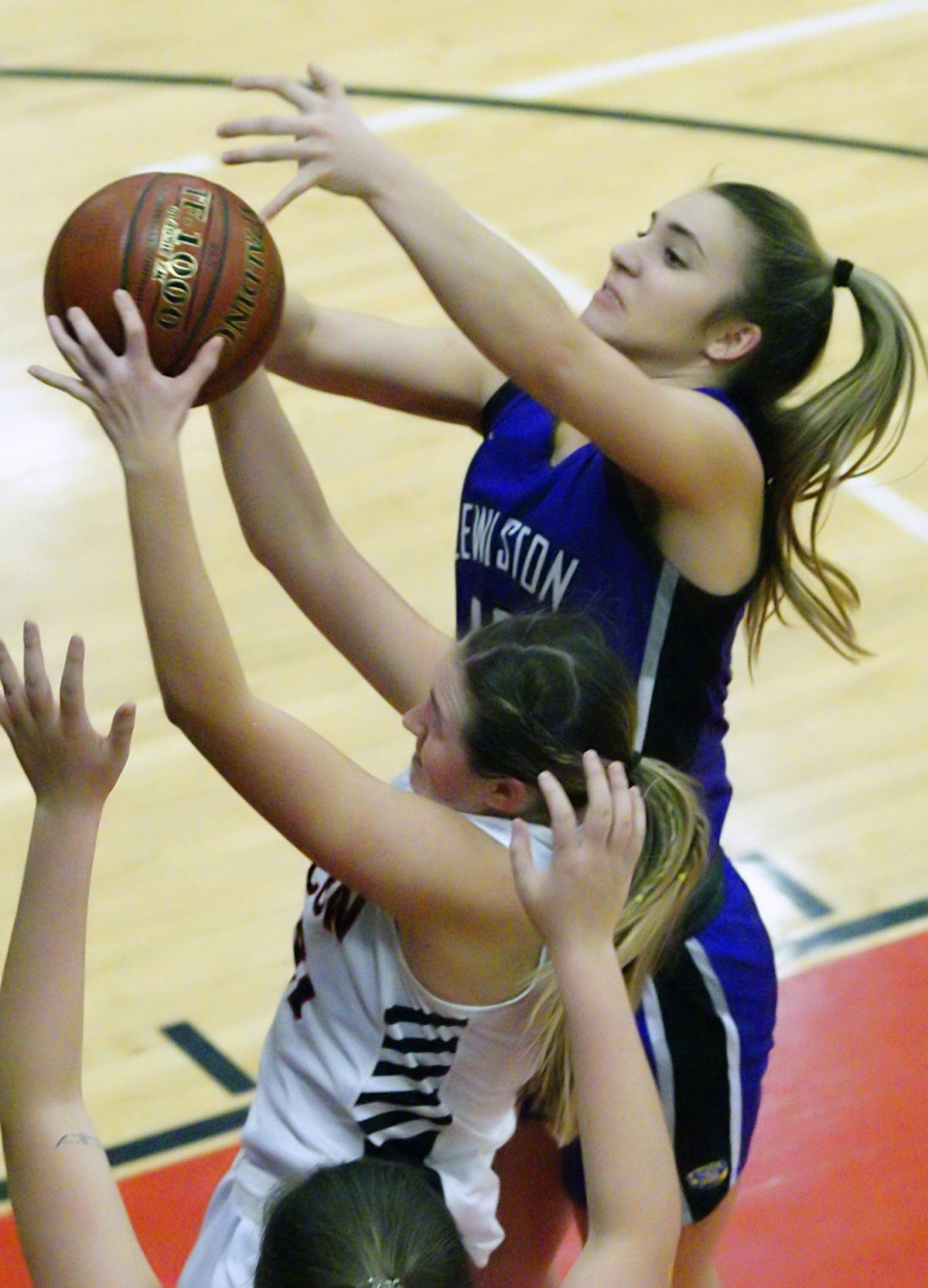 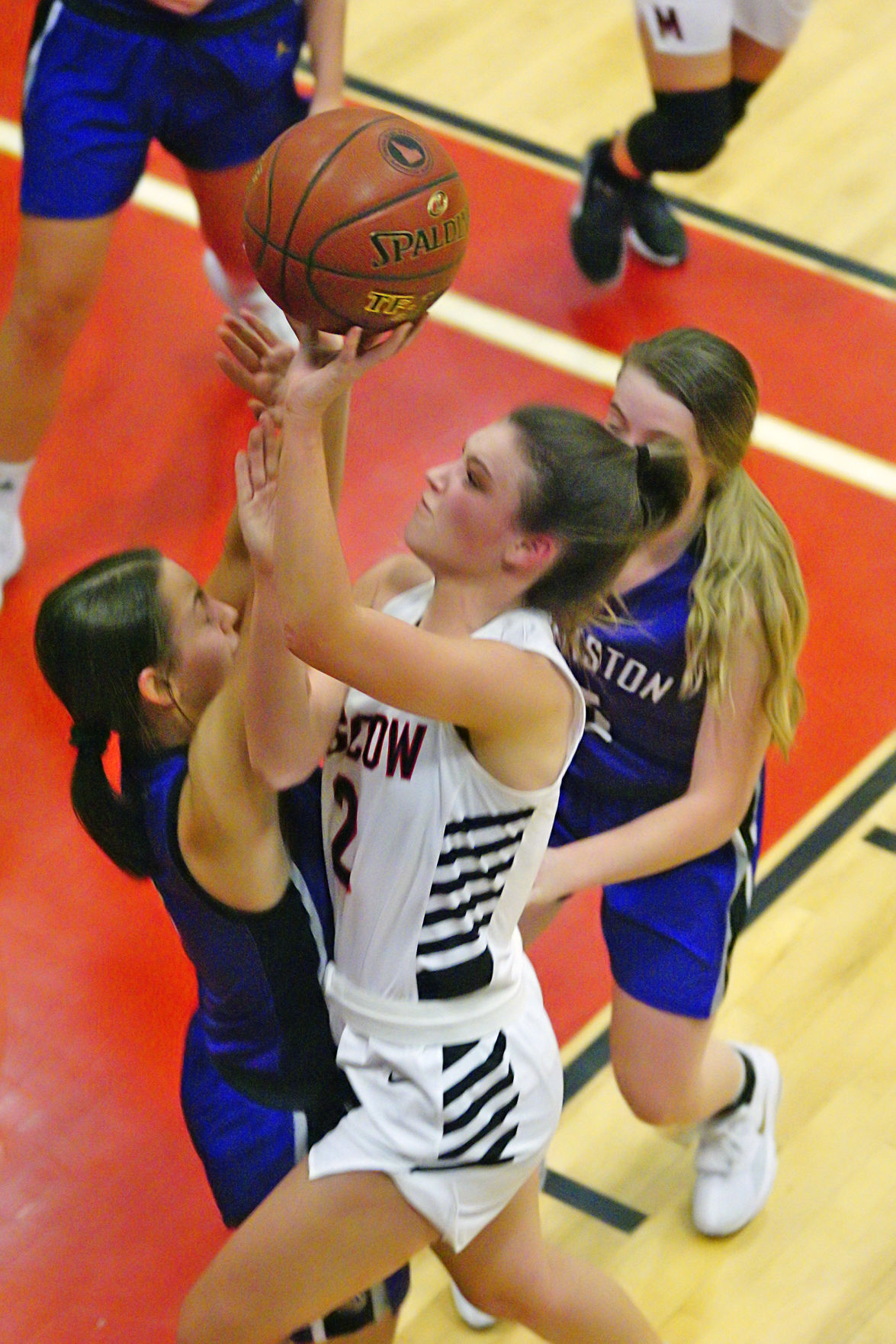 Moscow's Megan Watson (center) crashes into Lewiston's Emily Collins while driving for a shot Tuesday night. Watson was called for a charge on the play.

Moscow's Megan Watson (center) crashes into Lewiston's Emily Collins while driving for a shot Tuesday night. Watson was called for a charge on the play.

MOSCOW — Never mind the 52 takeaways, Tuesday’s game between Lewiston and Moscow at the Bear Den came down to the fouls.

Most importantly, who could capitalize on them.

Moscow went 0-for-10, while Lewiston hit 18 of its 24 from the line, the final two by Caitlin Richardson to put the game away for Lewiston, 28-23, after a tense final minute where the lead was only a possession away.

“Last year, we shot 38 percent for the whole year,” second-year Bengals coach Steve Lear said. “This was a huge improvement.”

Richardson, who led all scorers with 13 points — she made four of the Bengals’ seven field goals — took advantage of a Moscow turnover, flipping in a reverse lay-in off a long pass with 20 seconds remaining to push her team’s edge to three points.

A few seconds later, the Bengals (1-3) forced another steal, and Richardson got to the free-throw line, where she nailed two to seal it.

“I don’t really get nervous anymore,” the 6-foot senior post said of her late-game heroics. “In practice, we shoot 100 free throws, it feels like.”

Said Lear of his star player: “I don’t think she realizes it, but she could easily play at the next level.”

Richardson’s four clutch points came after the Bears (0-3) trimmed what felt like an insurmountable seven-point deficit with back-to-back 3s by Megan Heyns and Megan Watson, the latter finding her mark with about two minutes left to play.

Lewiston, which trailed by as many as six, had trouble earlier in the contest with Moscow’s restrictive zone defense. The Bengals continuously attempted to press the issue inside, to little avail before halftime.

“We did a great job getting into their passing lanes and anticipating,” said Moscow coach Karlee Wilson, a Lewiston grad and former University of Idaho point guard. “Our girls were flying around like crazy and really frustrating their guards being able to pass to their posts.”

Despite being held scoreless in the second quarter, Moscow was able to keep it at an arm’s reach with its defense, and ample second-chance opportunities. Lewiston was able to keep the Bears at bay with consistency from the line and a rejuvenated third quarter.

All but two of the Bengals’ first-half points were on free throws.

“We played really good half-court defense,” Wilson said, “but when most of their points come from the line, we just gotta stop fouling.

“We gotta value the ball a bit better, be able to attack and draw fouls from them, then make our free throws.”

The Bears were led by Watson’s nine points and eight steals. Richardson spearheaded the Bengals with eight rebounds, and Lewiston’s Jenika Ortiz chipped in five points on 5-of-7 from the stripe in a game where every point was crucial.

“We just gotta fake it, and make it,” Richardson said of beating the zone. “We need to slow it down and have confidence in ourselves.”

Lear faulted himself for Lewiston’s initial inability to penetrate Moscow’s defense. But after halftime, the Bengals’ offense became more fluid, and made safer passes — mostly inside to Richardson, who ignited an 11-0 spurt that set a nine-point edge and made up for a four-minute Lewiston dry spell in the final period.

“It wasn’t their fault, it was mine; we haven’t taught them an effective zone attack,” Lear said. “I just told the team, ‘Rest assured, we’re gonna get a lot better.’”