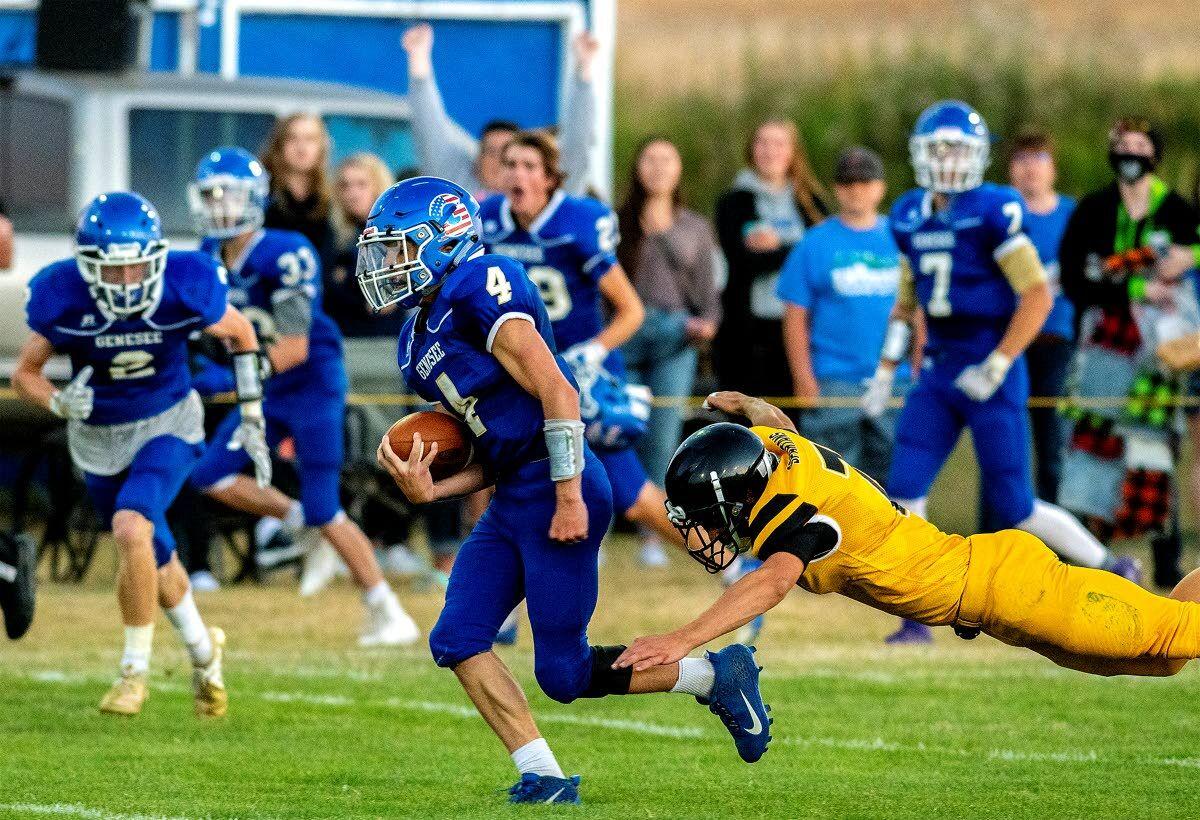 Genesee quarterback Angus Jordan runs as Timberline’s Chase Hunter attempts to make a tackle during Friday’s nonleague game. Jordan had four touchdown passes, including the game-winner with about a minute to go, to give the Bulldogs the victory. 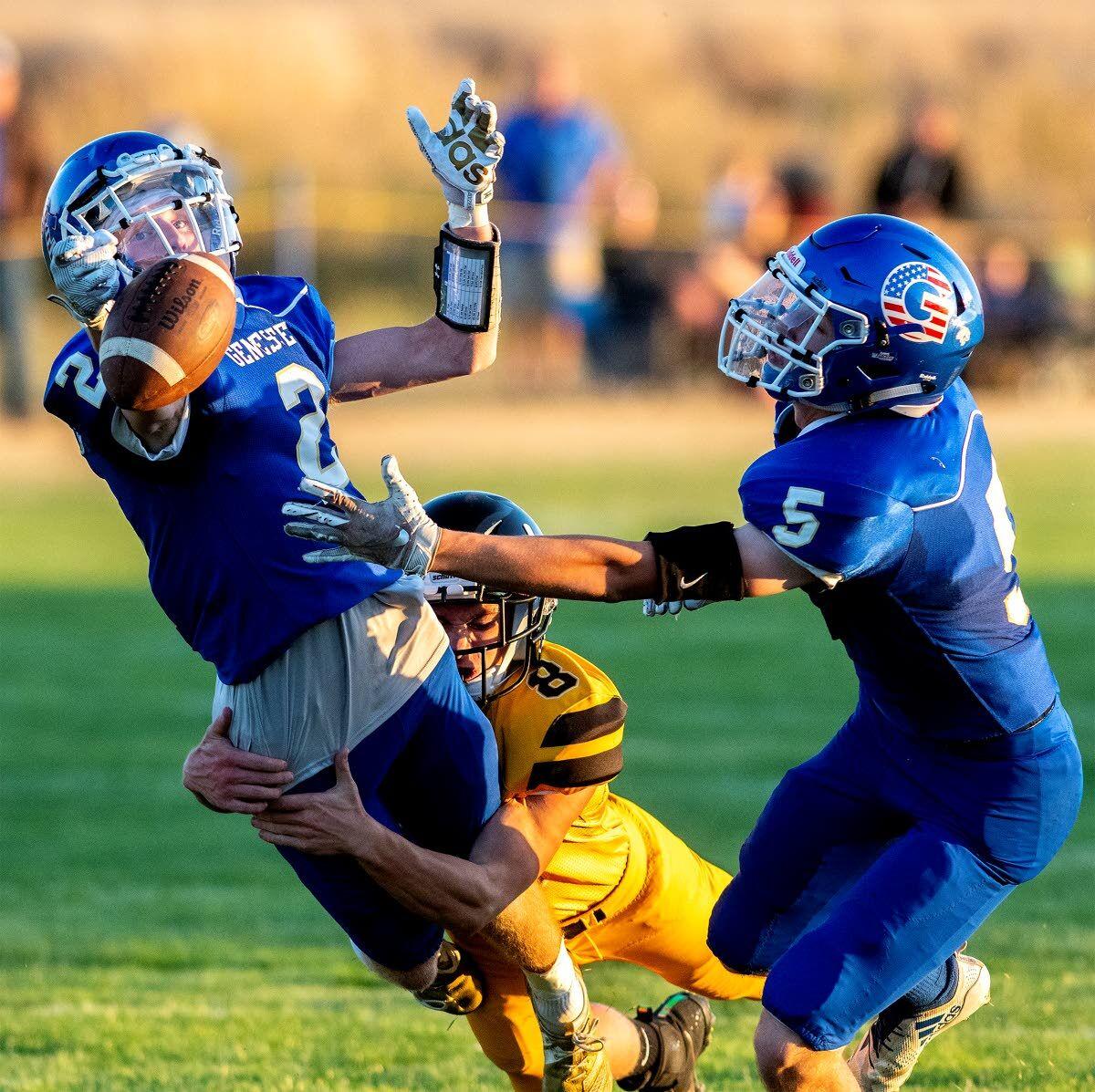 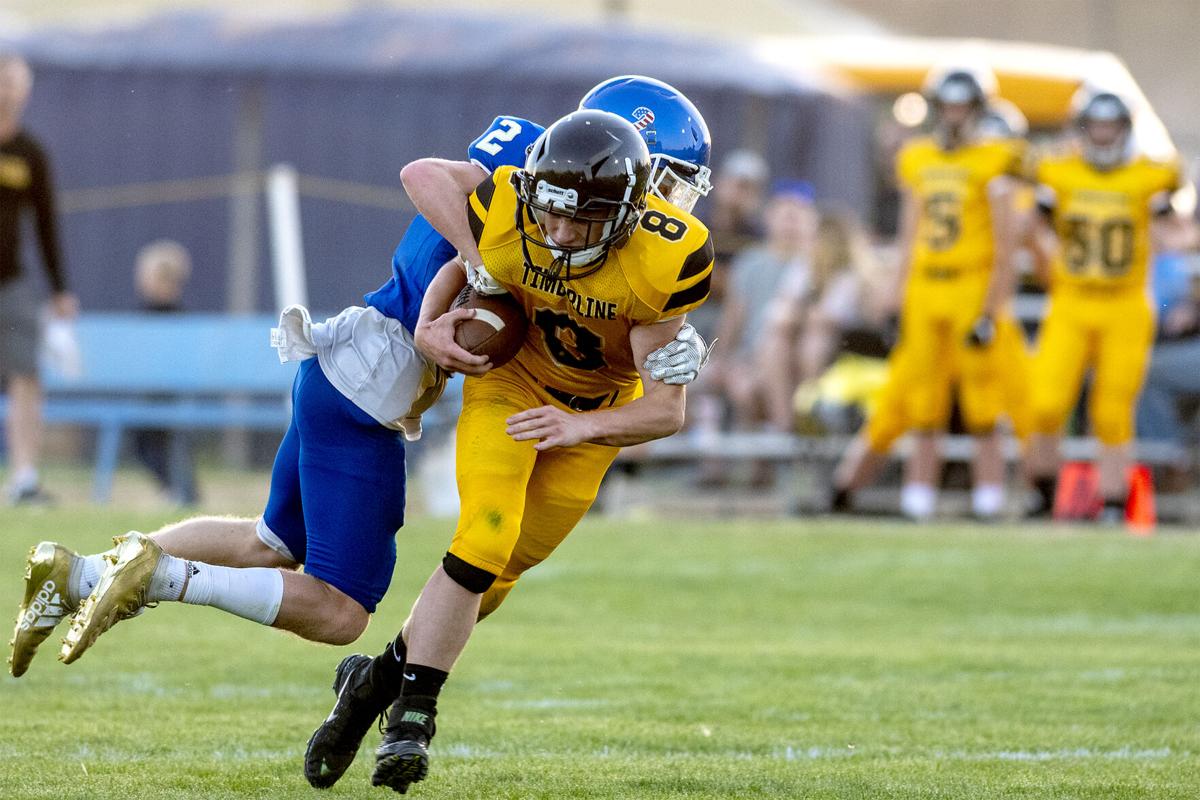 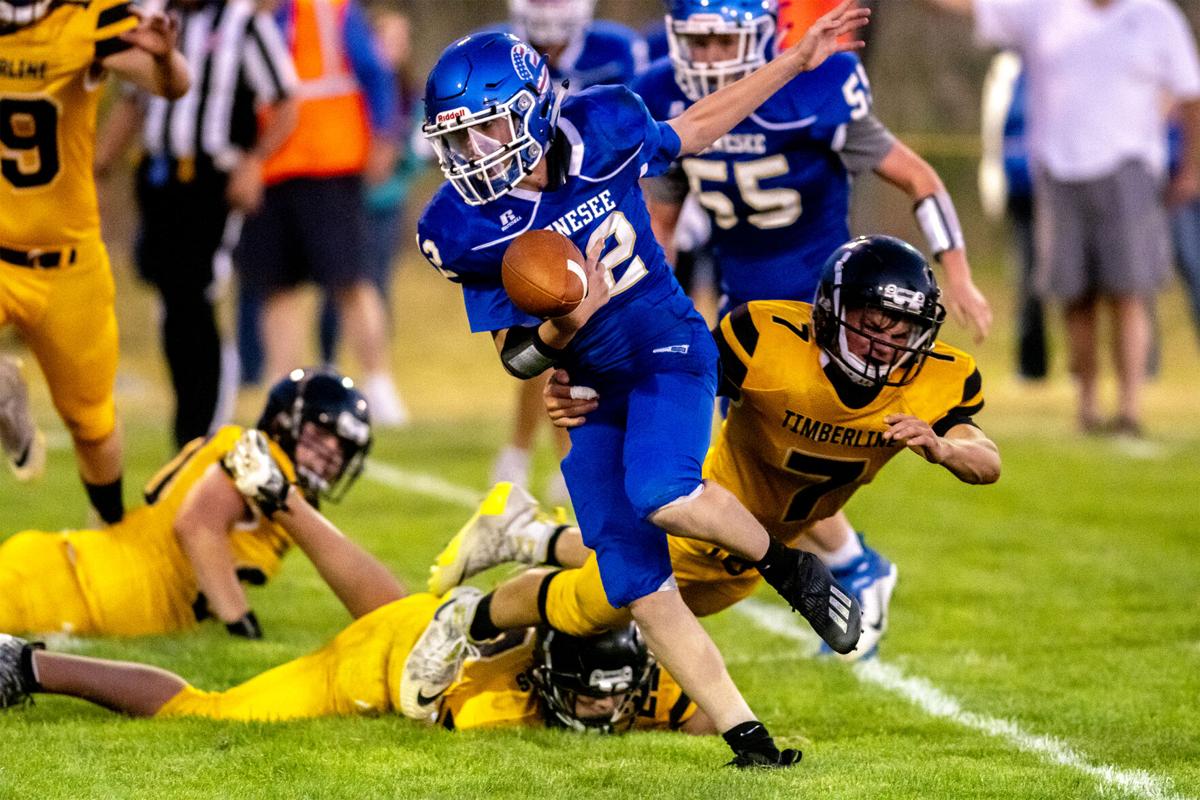 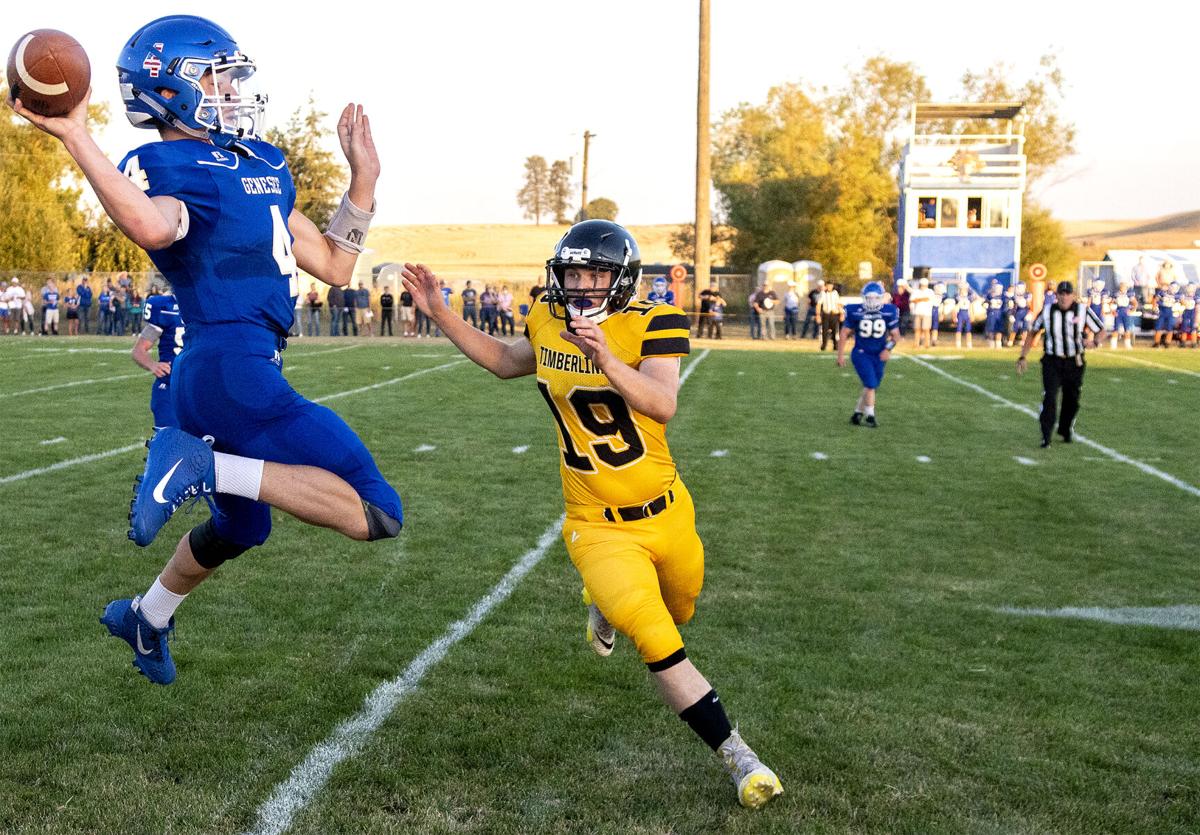 The Bulldogs' Angus Jordan leaps into the air for a throw. Genesee defeated Timberline 30-24 in Genesee on Friday. 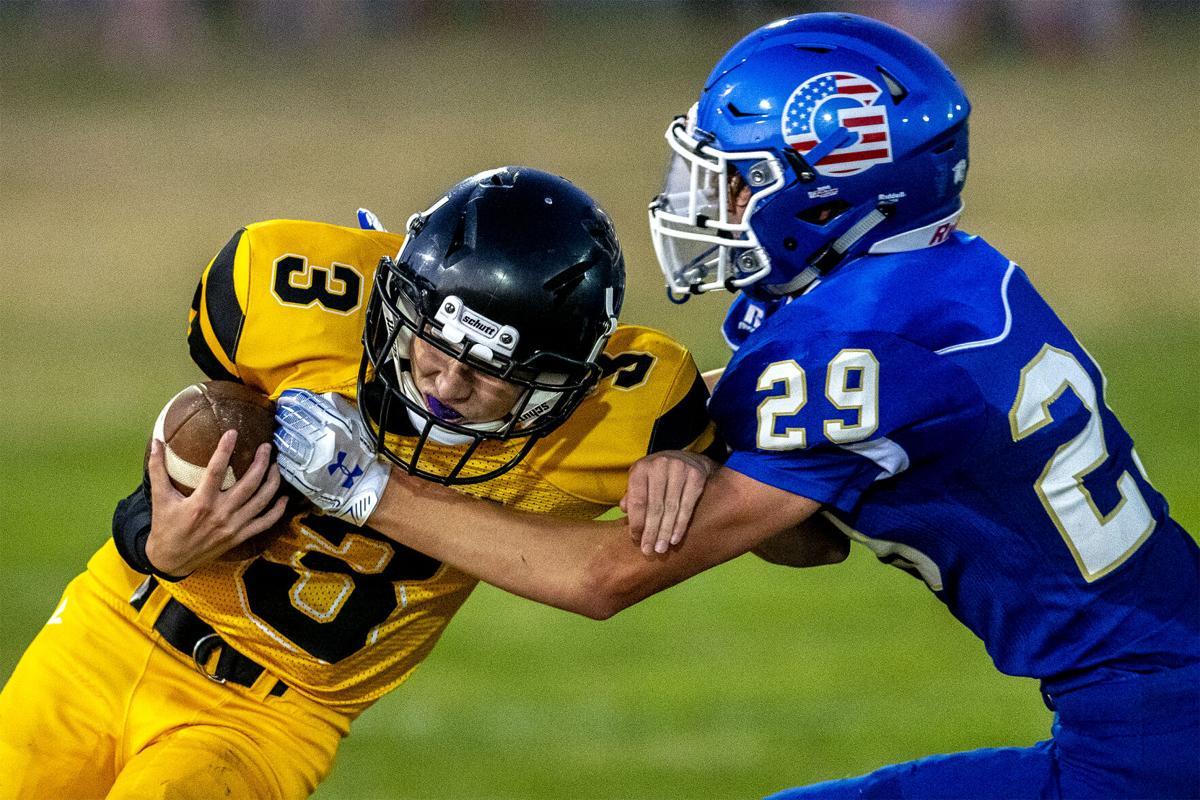 The Spartans' Parker Brown tries to push past the Bulldogs' Owen Crowley. Genesee defeated Timberline 30-24 in Genesee on Friday. 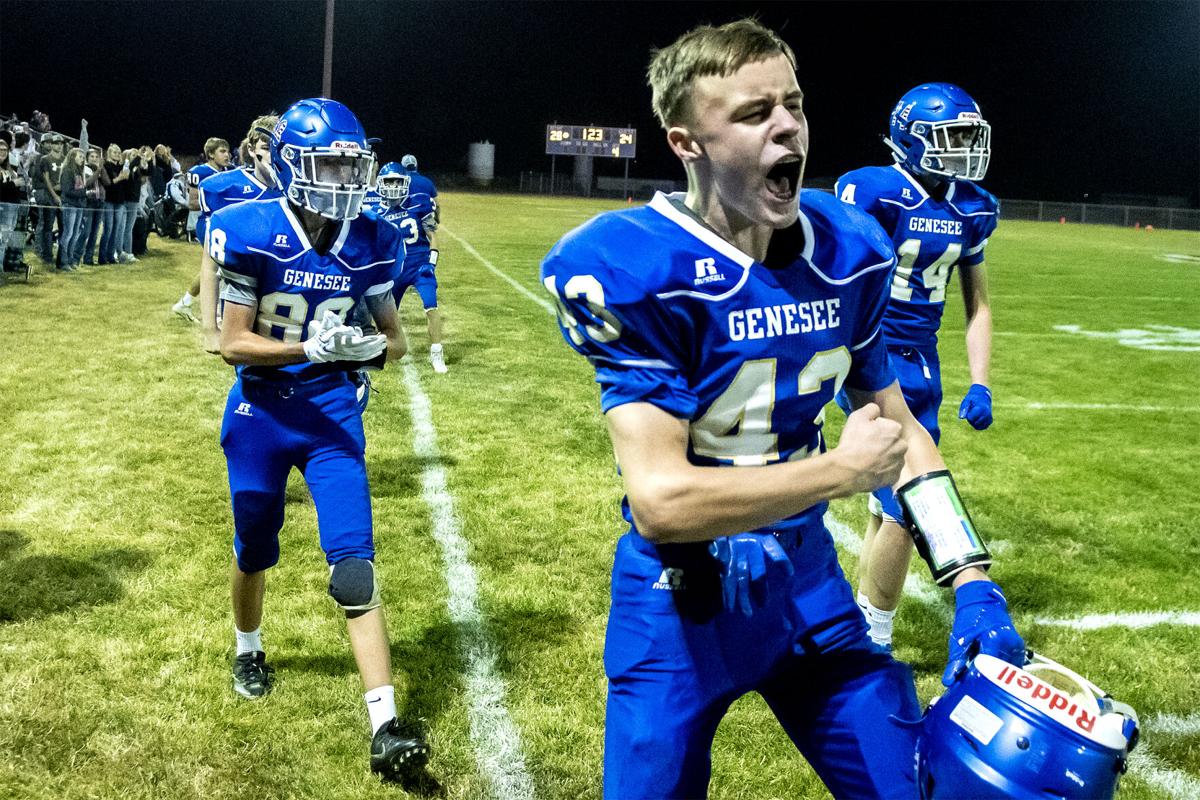 Bulldogs' Teak Wareham cheers on his team with teammates on the sidelines as Gensee scores to take the lead in the fourth. Genesee defeated Timberline 30-24 in Genesee on Friday.

Genesee quarterback Angus Jordan runs as Timberline’s Chase Hunter attempts to make a tackle during Friday’s nonleague game. Jordan had four touchdown passes, including the game-winner with about a minute to go, to give the Bulldogs the victory.

The Bulldogs' Angus Jordan leaps into the air for a throw. Genesee defeated Timberline 30-24 in Genesee on Friday.

The Spartans' Parker Brown tries to push past the Bulldogs' Owen Crowley. Genesee defeated Timberline 30-24 in Genesee on Friday.

Bulldogs' Teak Wareham cheers on his team with teammates on the sidelines as Gensee scores to take the lead in the fourth. Genesee defeated Timberline 30-24 in Genesee on Friday.

GENESEE — Much of the talk concerning small-town football on the Palouse has centered on how Genesee High School would benefit from its co-op with its wheat-field neighbors across the border to the west in Colton.

The Bulldogs, as it turns out, really have a lot to like in regards to their Washingtonian influx, which includes sophomore starting quarterback Angus Jordan.

Jordan, in his first varsity start as an Idahoan prep standout, capped off a wizardly opening day with a gutty, 61-yard touchdown pass to senior Dawson Durham, effectively putting away nonleague foe Timberline with the clock ticking under a minute.

Jordan’s heroics boosted the Bulldogs to a 30-24 win on a picturesque Friday here, a decision in which the Class 1A-Division I hosts had to come back to earn against a battling Pierce/Weippe Spartans team from the D-II ranks.

“I’ve never really played quarterback before, so I had to figure out the ropes (in the first half),” said Jordan, who passed for each of the Bulldogs’ four scores, and ended with approximately 180 yards on about 15 carries.

“But once we got that defense tired and I had some time, we knew we could come back.”

On his game-winner, Jordan — working out of shotgun — flipped around left, scampering away from a swarm of Timberline defenders. He looked to run, then spotted Durham all by himself, waving his hands about 25 yards away in the middle of the field.

Jordan straightened his shoulders and uncorked it, dropping a ball right into Durham’s waiting arms.

“For a sophomore, he’s playing like a senior,” first-year Genesee coach Alex Schnebly said. “His football IQ’s there. That final pass between him and Dawson, that’s what this team’s about, it’s about playing all four quarters, and keeping plays alive, going 100 percent.”

The Bulldogs, who were down 18-6 at the half, appeared revived in the third. On the quarter’s second play, Jordan spotted Durham sprinting free downfield, from left to right, and floated one right into the breadbasket.

Durham galloped 45 yards for the touchdown to make it 18-14.

“We were breaking down on fundamentals, but we came back out, had a lot more energy, which we didn’t in the first half,” said Durham, Genesee’s quarterback last year.

“To be honest, (coaches) stayed out of the locker room (at halftime),” Schnebly said. “... It was straight all our senior leadership.”

On the ensuing possession, Genesee put the clamps on Timberline’s ground game, which had been pesky all night with quarterback Rylan Larson at the helm (he rushed for more than 100 yards).

But Genesee induced a quick four-and-out, and Jordan followed by making some players miss, then flipping a short ball to Owen Crowley to take the lead, 22-18.

Two series later, the Spartans — who’d been rolling the dice on risky fourth downs throughout the game — shocked onlookers with a 96-yard jailbreak of a scoring play, a lofted pass from Larson down the right sideline to Parker Brown on a fourth-and-9 from the Spartans’ 5-yard line.

Timberline had many flashes, most notable among them a third-quarter Larson interception and an early rip-away fumble recovery, which Larson almost scored on, and a fourth-quarter strip-sack by Hunter Bower.

Yet the Spartans eventually were worn down by a larger and deeper Bulldogs outfit, which made the visitors’ lives difficult with a tough blitz led by Durham, Jaxon Moehrle and Cy Wareham — the latter of whom added a 14-yard receiving score in the second quarter, which he tipped to himself on an out route, plus an interception to end the game.

“Genesee did an outstanding job throwing that blitz at me all game, and I didn’t have an answer for it,” said Timberline coach Pat Christopherson, who added it was a “great game to build off. I love playing these guys a division above us.”

The Bulldogs, admittedly, entered with some jitters among their sideline. It showed in the first half, when Timberline made two red-zone stops, forced two takeaways and capitalized on missed tackles to milk the clock and finish drives with points. But the long and athletic Genesee team was able to tease out more offense than its opponents, and got more of a push from a defensive line that totaled approximately nine tackles for loss.

“There’s always nerves,” Schnebly said. “I had nerves, the players had nerves, and I was probably a little bit worse than them. ... but that was a great game. That’s why we play football, that’s why I’m out here coaching.”

And of the Washington-Idaho collective — the only one there is — he said: “I know a lot of it has revolved around Colton joining Genesee, but I think this game makes a statement. ... It’s a singular team with a singular goal.”