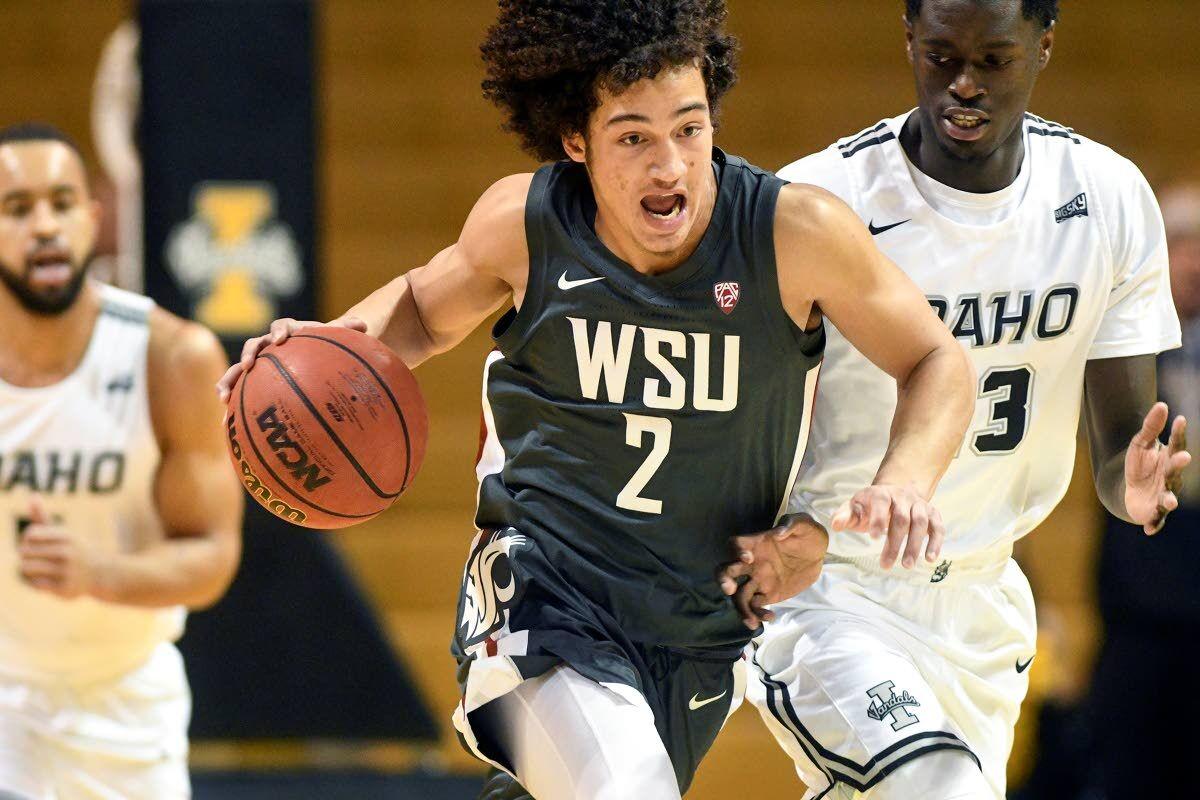 Growing up, former Washington State forward CJ Elleby (center) was a fan of the Portland Trail Blazers, partly because his hometown Seattle SuperSonics had moved to Oklahoma City when he was young. On Wednesday, Elleby saw his dream come true as he was picked No. 46 by the Trail Blazers in the NBA draft. 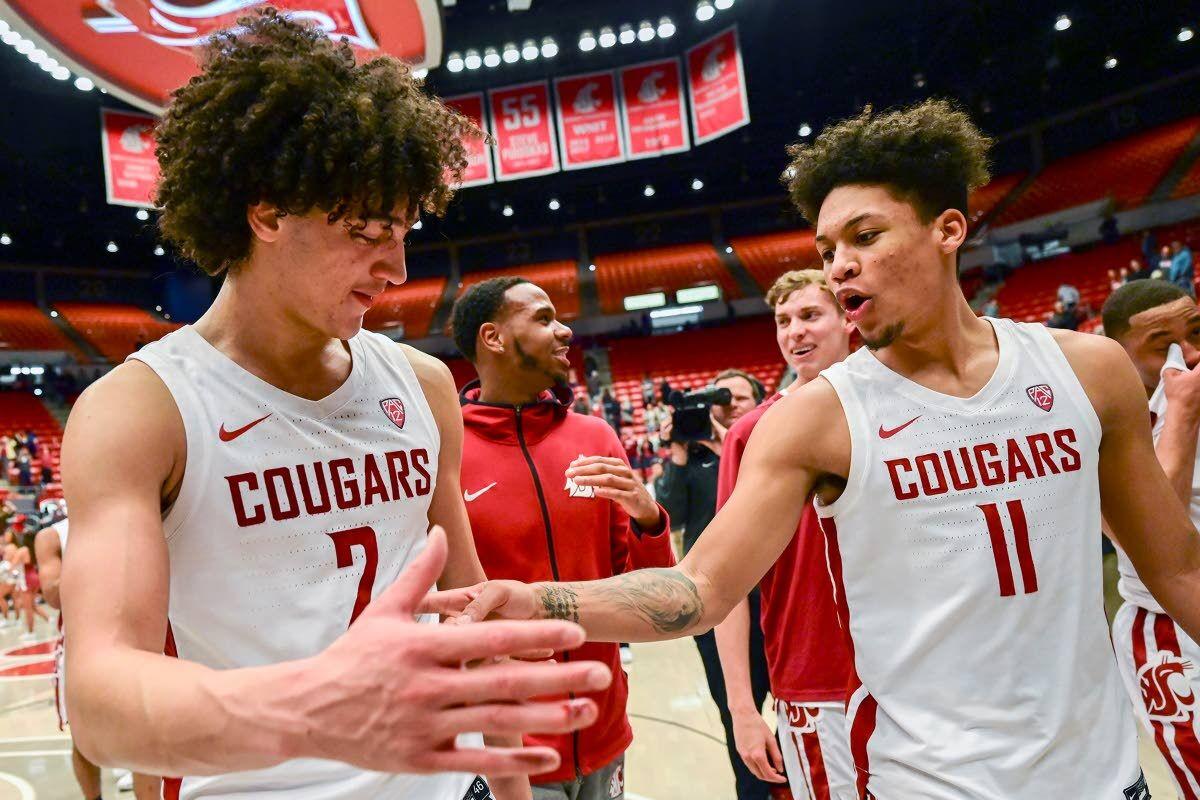 Growing up, former Washington State forward CJ Elleby (center) was a fan of the Portland Trail Blazers, partly because his hometown Seattle SuperSonics had moved to Oklahoma City when he was young. On Wednesday, Elleby saw his dream come true as he was picked No. 46 by the Trail Blazers in the NBA draft.

It came as a complete surprise to CJ Elleby, but it couldn’t have worked out better.

Entering Wednesday’s NBA draft, the Seattle product and electric former Washington State forward “had no clue” the Portland Trail Blazers were targeting him at No. 46.

Elleby told reporters on Thursday in a draft-recap Zoom chat that he hadn’t had much conversation with Portland, and because of COVID-19 restrictions, didn’t get a chance to work out for the Blazers. His agent was doing most of the legwork from behind the scenes.

“Portland would’ve been probably my first pick if I could’ve asked to go somewhere,” said Elleby, who went midway through the second round to become the first Coug drafted since Klay Thompson (2011). “It’s just a blessing and a dream come true.”

The Blazers “have been a team I’ve loved since I was a kid,” said Elleby, who grew familiar with the Rip City hoops scene through AAU ball. He also was too young to have developed a strong connection to the Seattle SuperSonics before they moved to Oklahoma City in 2008.

Much of his earlier fandom can be attributed to a Seattle Metro League connection. Elleby has long admired former NBA All-Star Portland guard and Seattle native Brandon Roy, now the fourth-year coach at Garfield High School.

Elleby’s father, Bill, was a McDonald’s All-American nominee as a Garfield legend in the 1980s, and CJ prepped at nearby Cleveland, also of the Metro League.

“Growing up, hearing stories about (Roy) and seeing his legacy that he left behind, and that he’s continuing to live it, was just inspiring. So I’ve always been watching the Trail Blazers,” said Elleby, who told reporters he was about to flip on some Roy highlights after his interview.

Elleby still is letting it all settle in. He hasn’t nailed down contract specifics yet, and remains sifting through the oodles of congratulatory messages.

“I kind of got a lot to go through on my phone,” he said. “It’s pretty much off the hook.”

The dynamic 6-foot-6 scorer at wing wasn’t even sure if he’d hear his name called. He’d seen the mock boards, the vast majority of which had him outside of the 60-player list of expected draftees.

“The projections that were put upon me were late second round to undrafted, and a lot of the people who were making these mock drafts left me off of them,” Elleby said.

He was an underrated prospect from a program off the beaten path, certainly, but undeniably one of the best out of the Pac-12. Elleby knows his skillset is multifaceted enough to translate well to the pros.

He is highly skilled and spirited, a lights-out spot-up shooter who can put up points in any variety of ways. Elleby spaces the court and can affect a game without possessing the ball — forcing steals and errant shots with active hands on defense and a long reach.

“I feel like being versatile and being able to do those different (defensive) things is gonna get me on the floor,” he said.

Elleby ended his sophomore season at Wazzu fourth in the Pac-12 in points per game (18.4), seventh in rebounding (7.8) and first in steals (1.8). He captained the Cougars to a resurgence last year, steering WSU to an Apple Cup sweep, its first Pac-12 tournament win in 11 years and myriad other exceptional moments.

His former coaches at WSU, Kyle Smith and Ernie Kent, highlighted Elleby’s intangibles in past years — his enthusiasm for the sport and a certain game-day mojo that’s tough to replicate or coach.

“I feel like it’s a mindset, it’s an approach. Not everybody is competitive,” Elleby said. “Everybody likes to ask that question: ‘Do you like to win or do you hate to lose?’ I’m kinda one of those guys that hates to lose.”

Elleby tested the draft waters after his true freshman year and learned he had a ways to go in terms of his defense and shot mechanics/selection.

Although his field-goal percentage took a slight dip as he tinkered with his jumper, Elleby’s rounded improvements from Year 1 to 2 were evident to the eye. With star Coug forward Robert Franks graduated, he adopted a considerably larger role, and took charge of games with more regularity.

He entered the draft pool again in April, and would spend much of his time gearing up for the pros at Las Vegas’ IMPACT Basketball training center. He worked out alongside a number of eventual draft picks, including former two-year WSU guard Malachi Flynn, who shined at San Diego State last year and was taken by Toronto at No. 29.

“I was able to get in the gym consistently, every day. I had no problems with access to weights and to a court,” Elleby said.

“I just always believed in myself and I have a great community of people around me who believe in me. So really, that was the process. I felt that it was time, I felt that I was ready. Last year I decided to go back to school. But this time around I just had a different feeling in my stomach, just kinda my gut feeling.”

Elleby and Flynn — from Tacoma — missed each other in Pullman, but the two were familiar through AAU and high school ball. Another West Side product, University of Washington guard Jaden McDaniels, was selected by the Los Angeles Lakers at No. 28.

Elleby “got a new energy going into the second round seeing both of them get drafted.”

Not too long afterward, Elleby was surprised to learn he’d be the third Seattle-area player to go — and fortuitously enough, land close to home with his childhood-favorite franchise, which will begin its NBA season Dec. 22.

“It’s a great place to be, a great place to go, a great franchise (who) has a history of developing their second-round picks and keeping them in the NBA,” he said. “I wouldn’t want to be any other place. I get to stay in the Pacific Northwest.”

Elleby said he’s been learning some ins and outs of the City of Roses from good friend Isaac Bonton, a Portland native and Cougar point guard who transferred to WSU last year.

Elleby was “holding it together, playing it cool” after he got the call from the Blazers. That is, until childhood best friend PJ Fuller, a TCU guard and Seattle native, called him up.

“I just looked at him on the phone and started losing it, and really just tears of joy because growing up, that’s what we dreamed of,” he said.