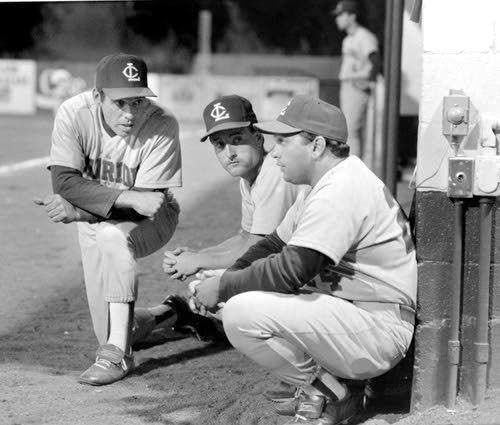 Ed Cheff (left) confers with his assistants during the 1980s.

Ed Cheff (left) confers with his assistants during the 1980s.

To find a fit and prosper as a member of Lewis-Clark State’s baseball program under storied former coach Ed Cheff, incoming players would need to adhere to the longtime skipper’s philosophy: “Earn your way.”

“I’ve always believed in that stuff, I think it helps kids’ characters,” said Cheff recently by phone from his home in Sequim, Wash. “No matter what, you should earn your way. So, for example, if we wanted to go play a tournament in San Diego, we’d have to cut a helluva lot of firewood to make that trip.”

It’s been 10 years since Cheff retired with 1,705 wins and 16 national NAIA titles in his back pocket, accrued from 1977-2010. Yet the stories about the National College Baseball Hall of Famer are endless.

The Warriors were groomed to be hard-nosed, physically and mentally, and to persevere through adversity the coach would cook up in practices and off-the-field training sessions that were often more strenuous than anything L-C would see in a game.

“Those were intense practices, trust me,” said Dave Bingham, a catcher/outfielder on LCSC’s 1992 championship squad. “Basically, you were tough, or you weren’t.

“I remember being in the minor leagues and thinking, ‘Some of these guys would never have been able to play at L-C.’”

Here were some ground rules, according to Rusty Harris, an infielder from 1984-87: “Hit the gate running, don’t be late, never sit down. If you’re standing around, they’d put a rake in your hand.” Others have mentioned that batting gloves weren’t allowed, and feet-first sliding was frowned upon.

To not give maximum effort meant getting a stern and memorably unique talking-to, or perhaps added wind sprints, sometimes even after a win the coach wasn’t particularly pleased with.

Hard-hitting outfielder Allan Peterson, who starred on L-C’s first title team in 1984, recalled a tournament in Hawaii that year, when the Warriors opened with a doubleheader against Hawaii Pacific, dropping a one-run contest in Game 1 before a seven-run win. Some of the Warriors were a bit too jocular for Cheff’s liking.

“We jogged about 5 miles back to the hotel,” Peterson laughed. “You’d run through a brick wall for him. ... If he saw an it-factor, he’d take the chain off the collar and say, ‘Go for it,’ then he’d put it back on and send us back to school.”

Cheff ran a tight ship, expecting daily competitiveness and fearlessness. It was a learning curve for many, to put it mildly, but a dynasty grew from it, as well as a genuine appreciation that Warrior alumni still voice.

In speaking to Cheff’s players, many will say the same thing: “He turned boys into men.”

“As you get older and talk about those times, you understand he was trying to take you to a different place,” said Brett Holley, an outfielder from 1986-87. “When the pressure’s on, it’s second nature. He was a tough guy, and that’s how he coached, but he’s crazy smart. He could dig into your soul and bring the player out.”

Under Cheff, 117 Warriors were drafted into pro ball, though he says his goals were more character-driven.

“That was always a secondary thing,” he said. “First was to be a great teammate who buys into the program.”

Cheff’s coaching connections were key in generating those grueling schedules that were practically unheard of for others in the classification. The Warriors would usually tune up in the fall with a tournament at Grand Forks, British Columbia, which featured a variety of high-level regional competitors. When spring came, nothing got easier.

“He always had a plan, that’s the best way to put it,” said Duane Church, a former assistant coach and three-time champion as a catcher in the mid-1980s. “There were no accidents. You start to realize how much thought he put into everything he did.”

Among his strategies were to litter matchups with Division I foes — and top-tier tournaments — throughout the slate, to provide L-C as good a competition as it could get. On occasion, LCSC embarrassed D-I teams, some of them ranked in the top 25.

Bobo Brayton’s Washington State was arguably LCSC’s most heated rival. Cheff’s teams went 87-67 against the Cougs, who’d typically trot out some of their best lineups in those matchups.

LCSC’s program had grown so dominant that it explored making a leap to D-I play in the mid-1990s, but it never came to fruition.

“That was Ed’s meat and potatoes — he didn’t want to play NAIA schools, he wanted to play NCAA schools,” said infielder Pat Mackey, the NAIA World Series MVP in 1987.

On the recruiting end of things, Cheff had furnished western pipelines that are still maintained to this day. And he could bring the best out of local talents, plenty of whom became national standouts.

When recruits arrived at Harris Field, any egotism that may have existed before was ... well, extracted.

“Mentally, we were all a bunch of animals; it was a mold,” said catcher Larry Ephan, a three-time champion as a player. “That’s the bottom line to it all. We had no quit in us. He taught us resilience at its highest level.”

There are hundreds of fascinating tales involving intrasquad bouts of no-rules basketball, rugby and of course, the much talked-of smoker boxing matches, a weekend event that pitted teammates against each other, “creating an adverse situation to get players to have the mental toughness to play, and finding ways to unite us,” noted Church.

“It was craziness. Today, you wouldn’t think about doing it, but back then, it was an accepted thing,” said Cheff, who offered an intriguing analogy regarding the smoker matches. “I’d put their names on a board on Friday night, then some nights I’d say, ‘Well gosh darn, I’ll have to postpone it until Saturday.’ It’s like having a championship rained out. They’re all geared up, and here comes the rain, so you have to sit around another day before a big event in your life.”

In turn, LCSC’s teams were among the nation’s most tenable, coordinated and relentless. They had a swagger about them, an air of “You can’t beat me.” Some of their outrageous margins of victory suggest what Bingham affirmed: “We wanted to stomp everybody. That was it — that was the mentality — we were going to kill you.”

Added 1984 ace and Series MVP Trace Czyzewski: “Just tough teams, physically and mentally. If there was ever a brawl, they would’ve won those, too.”

Cheff, a former collegiate football player and prep coach, brought that kind of no-nonsense, tough-love style to the diamond. If he saw something special in a player, he'd crank up the intensity.

Players are wont to point out how accountable their teammates were, and clutch. Former pitching coach Gary Picone remembers some of the most entertaining baseball games he’s seen being between L-C stars at Harris Field practices. In a way, one might equate it to how the 1992 Team USA basketball “Dream Team” played at its peak in team scrimmages, with few around to spectate. L-C players have suggested their reserves most likely would have started at other programs.

“Ed’s talked about it in coaching clinics: ‘Make practices tougher than game situations, so when those situations come up, and if things start going negative, you don’t see it as a mountain you can’t climb,’” Picone said.

Cheff has become a revered figure in an area that’s very much known for its baseball. There are several volumes’ worth of legends surrounding the 34-year L-C coach, but what’s certain is that he put the program on the map, and did it his own way.

“Cheff just knew how to put together teams, and got max potential — giving 100 percent all the time,” said Montie Phillips, a formidable outfielder on two title teams (1985, ’87). “He instilled the drive to win in each person. And it didn’t matter who, we thought we were better.”