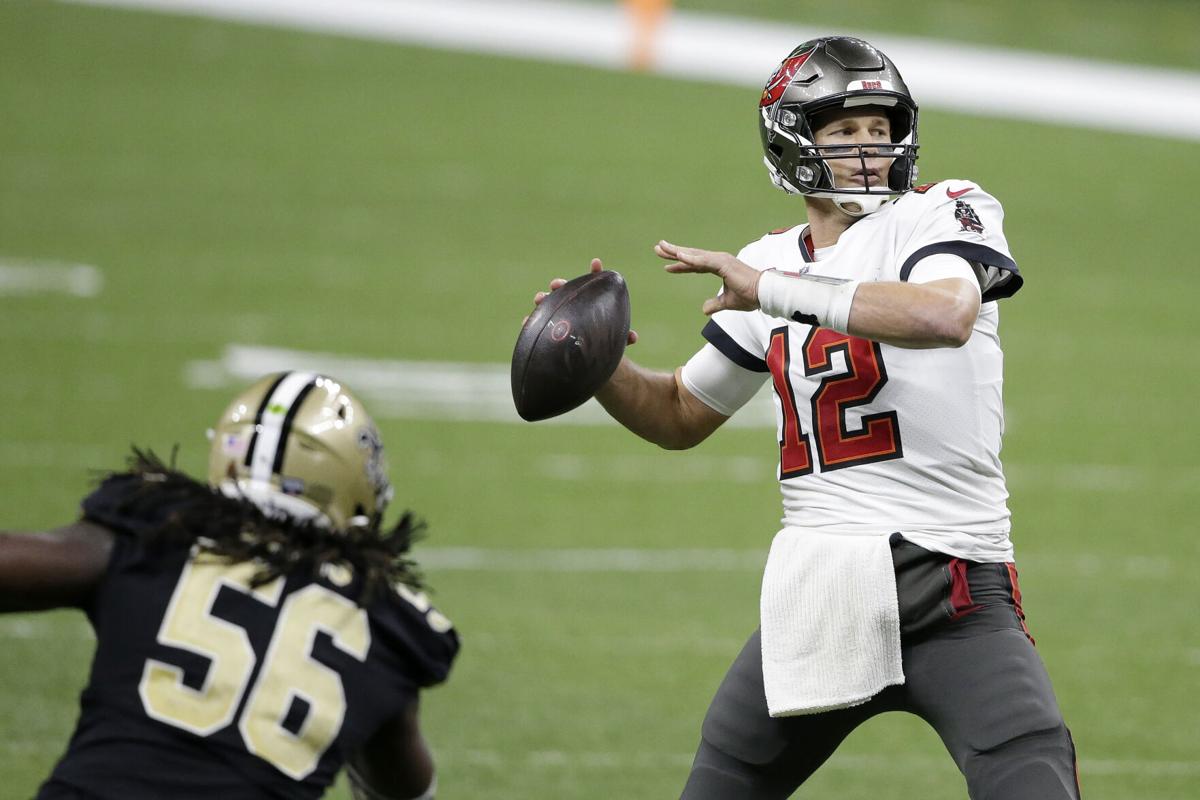 Tampa Bay quarterback Tom Brady passes in front of New Orleans outside linebacker Demario Davis during the second half of an NFC divisional round playoff football game Sunday. 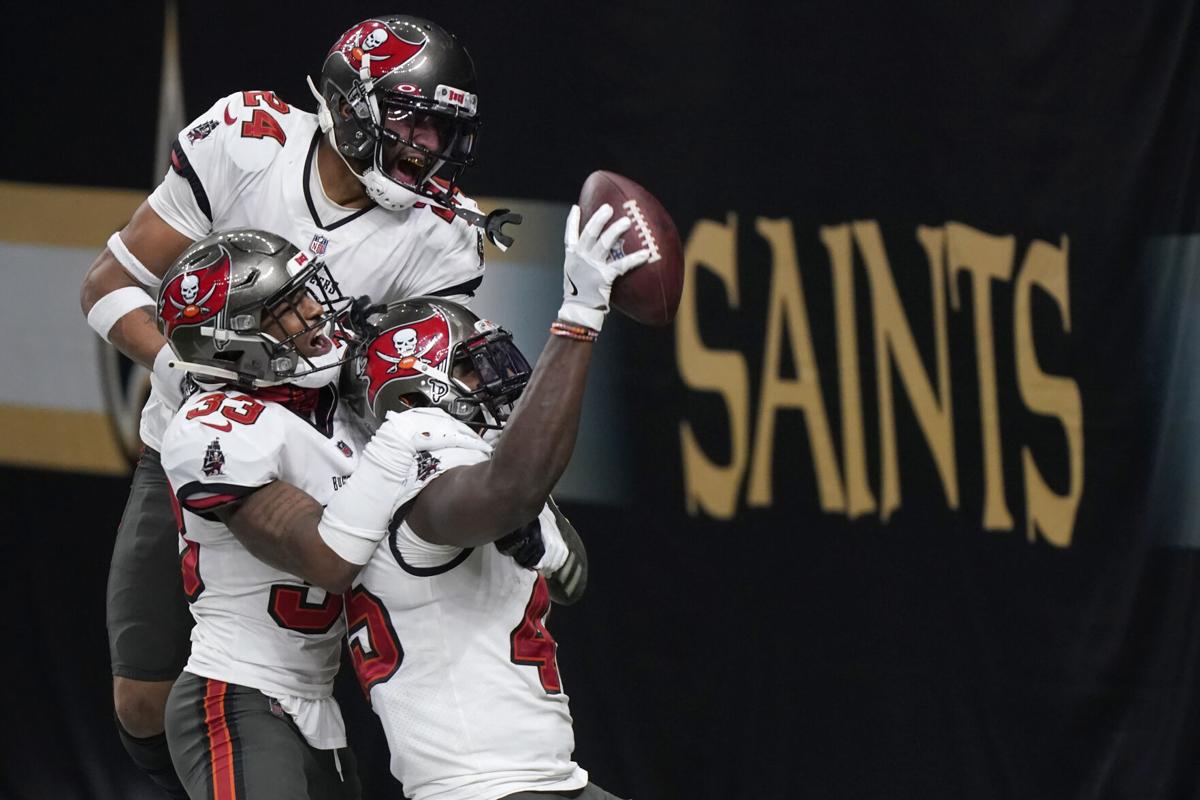 Tampa Bay inside linebacker Devin White (bottom right) celebrates after intercepting a pass with teammates Jordan Whitehead and Carlton Davis during the second half of Sunday's NFC divisional round playoff game in New Orleans. 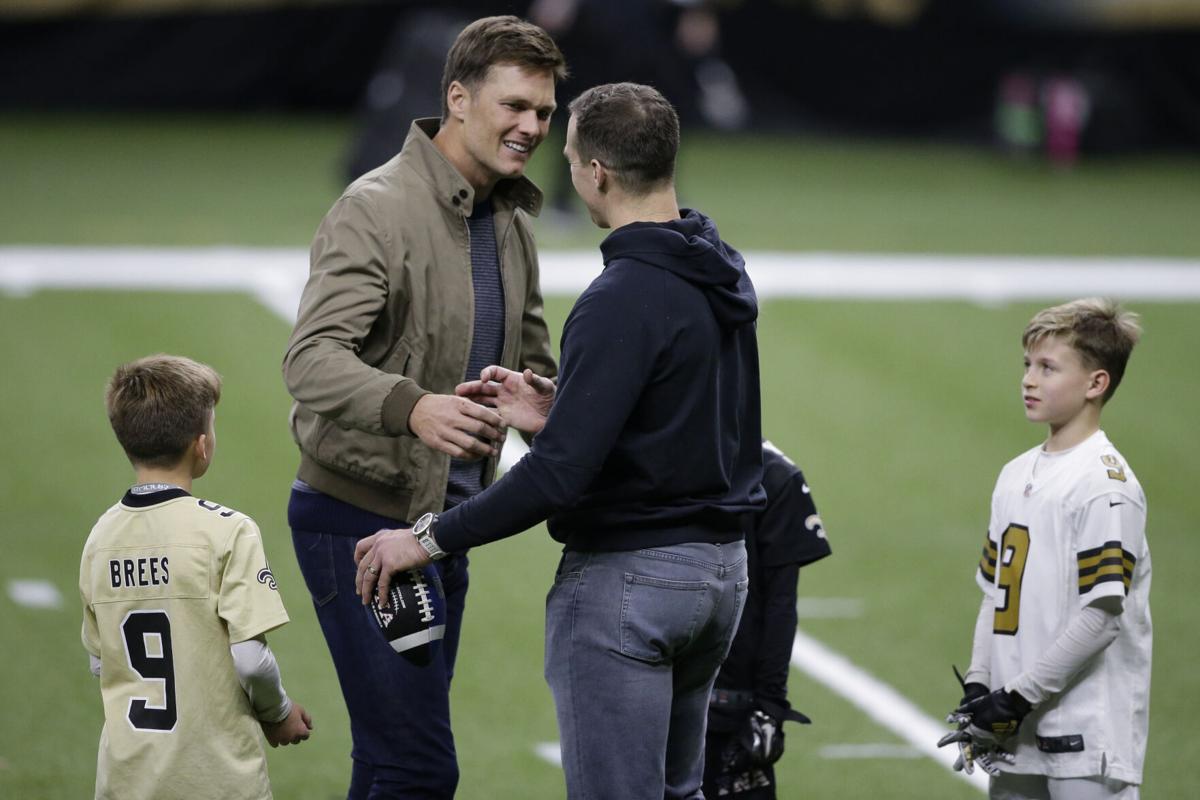 Tampa Bay quarterback Tom Brady passes in front of New Orleans outside linebacker Demario Davis during the second half of an NFC divisional round playoff football game Sunday.

Tampa Bay inside linebacker Devin White (bottom right) celebrates after intercepting a pass with teammates Jordan Whitehead and Carlton Davis during the second half of Sunday's NFC divisional round playoff game in New Orleans.

Two of those touchdowns came on short passes to Mike Evans and Leonard Fournette. After Brees was intercepted by linebacker Devin White in the middle of the fourth quarter, Brady drove the Bucs to the 1-yard line, from where he scored himself to all but ensure his 14th trip to a conference championship game — his first in the NFC.

That game will take place in Green Bay in seven days, where the 43-year-old Brady will try to advance to his 10th Super Bowl in a showdown with Packers All-Pro quarterback Aaron Rodgers.

“We worked hard to get to this point. Two road playoff wins is pretty sweet,” Brady said. “We’ve got to go beat a great football team we know pretty well. Aaron’s playing incredible.”

Meanwhile, the Brees era in New Orleans could be done after 15 seasons.

The game might have been the final one in the Superdome for the 42-year-old Brees, who is under contract for one more year but has not discussed any plans to play beyond this season, and has sometimes hinted at his impending retirement.

While just 3,750 tickets were distributed in the 73,000-seat Superdome to comply with local COVID-19 restrictions, the fans made themselves heard with an eruption of cheers when the 42-year-old Brees first took the field for New Orleans, seemingly sensing this could be their last chance to see him play at home.

Brees, under contract for one more year, declined to say whether he's retiring. After he'd changed in the locker room, he walked back onto the field and watched his four children play, at one point sharing a long embrace with his wife, Brittany.

“I appreciate all that this game has given to me,” Brees said. “There are obviously so many incredible memories."

If it was his last game, it won't be one he'll want to remember. The NFL's all-time leader in completions and yards passing was 19-of-34 for 134 yards, one touchdown and three interceptions.

“A couple of them I probably shouldn't have thrown and maybe forced it,” Brees said. “That's what this game came down to is those turnovers because all of those gave them the ball deep in our territory, and you can't do that with (Tampa Bay's) offense. They're too good and they're going to capitalize on that, which they did.”

Brady went 18-of-33 for 199 yards in what often resembled more of a defensive struggle. Unlike his previous two meetings with the Saints — both losses — he was not intercepted and largely avoided pressure, taking only one sack.

“Really just locking in and playing a lot better than we did the first two times we played them,” he said. "We had a bunch of turnovers last time. This time, they turned it over and that’s usually the story of football games.”

After Brees' third interception on a tipped pass late in the fourth quarter, the Bucs were able to close out the game with Brady, in his first season with Tampa Bay after 20 with New England, taking a knee.

“Obviously they beat us twice in the regular season,” Bucs left tackle Donovan Smith said. "We came around in Round 3 with the knockout.

“We've been building. You got to get hot at the right time.”