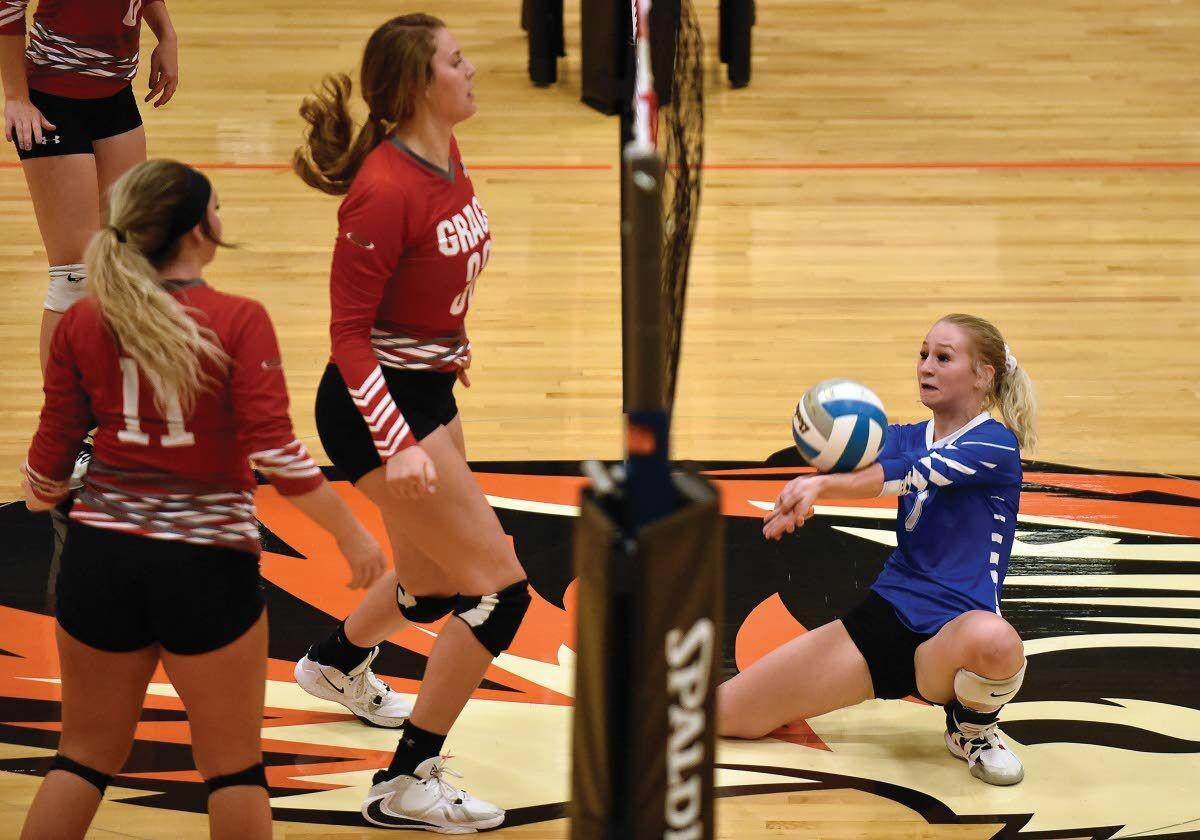 Genesee's Riley Maguire keeps the ball alive during the Class 1A Division I volleyball championship match Saturday against Grace at Jerome High School. 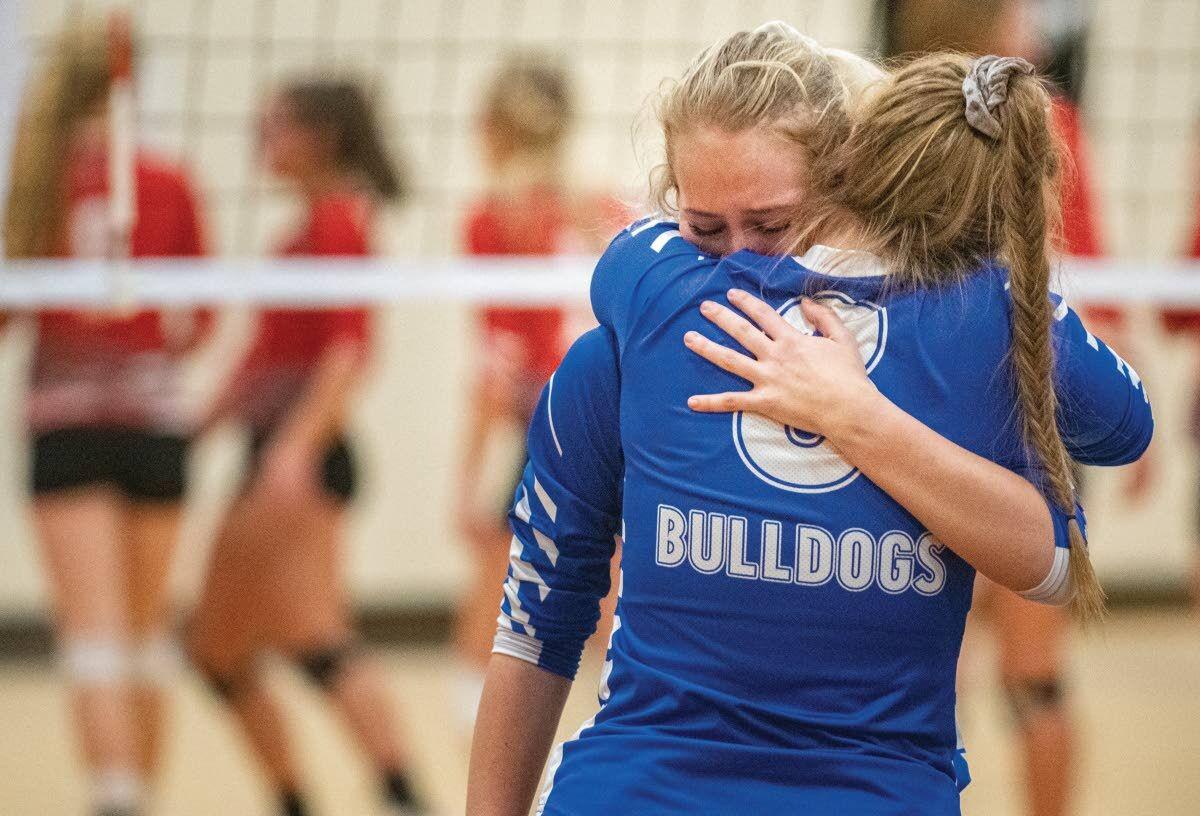 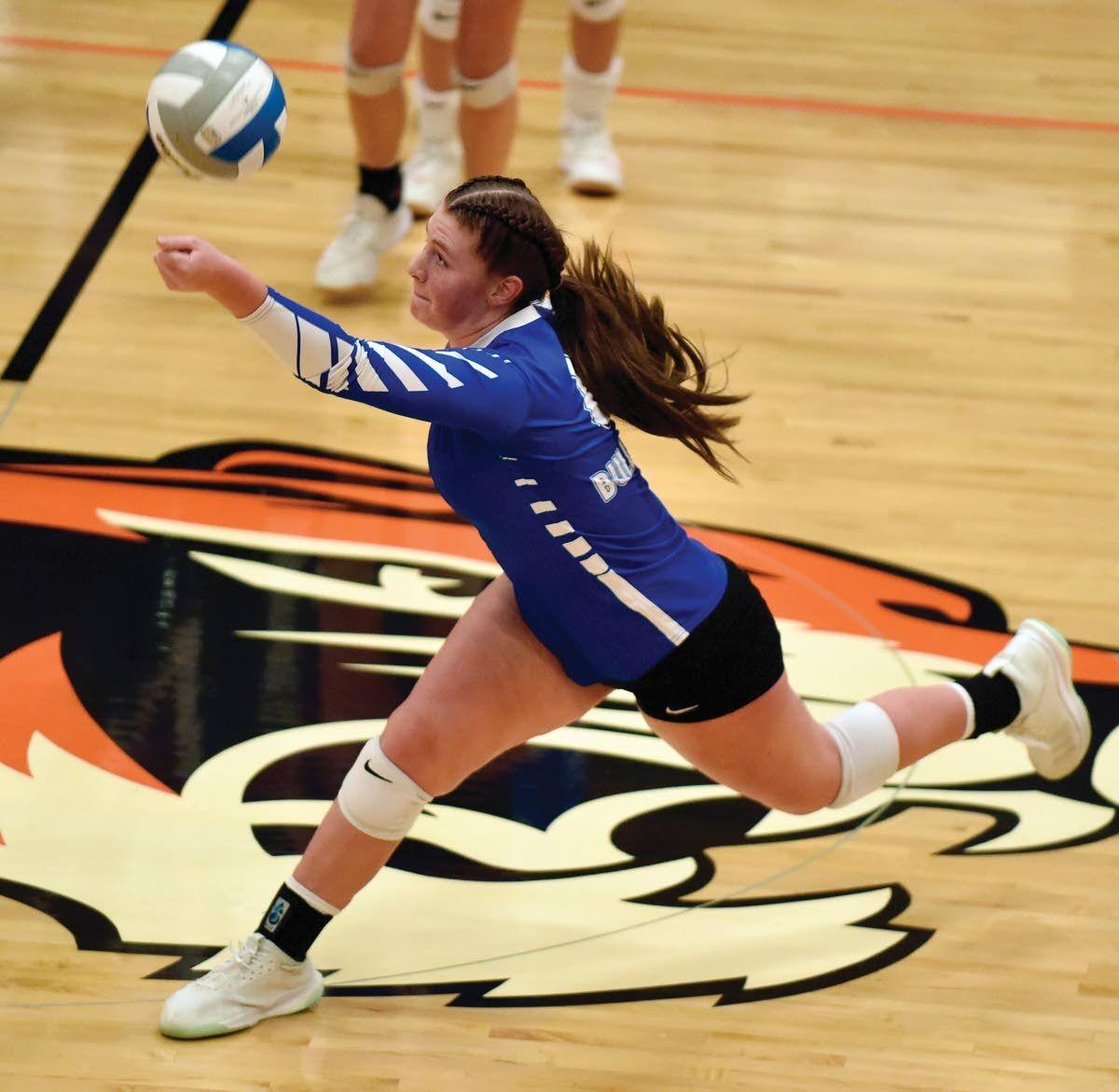 Genesee senior outside hitter Claira Osborne keeps the ball in play during Saturday's Class 1A Division I volleyball championship match against Grace at Jerome High School. 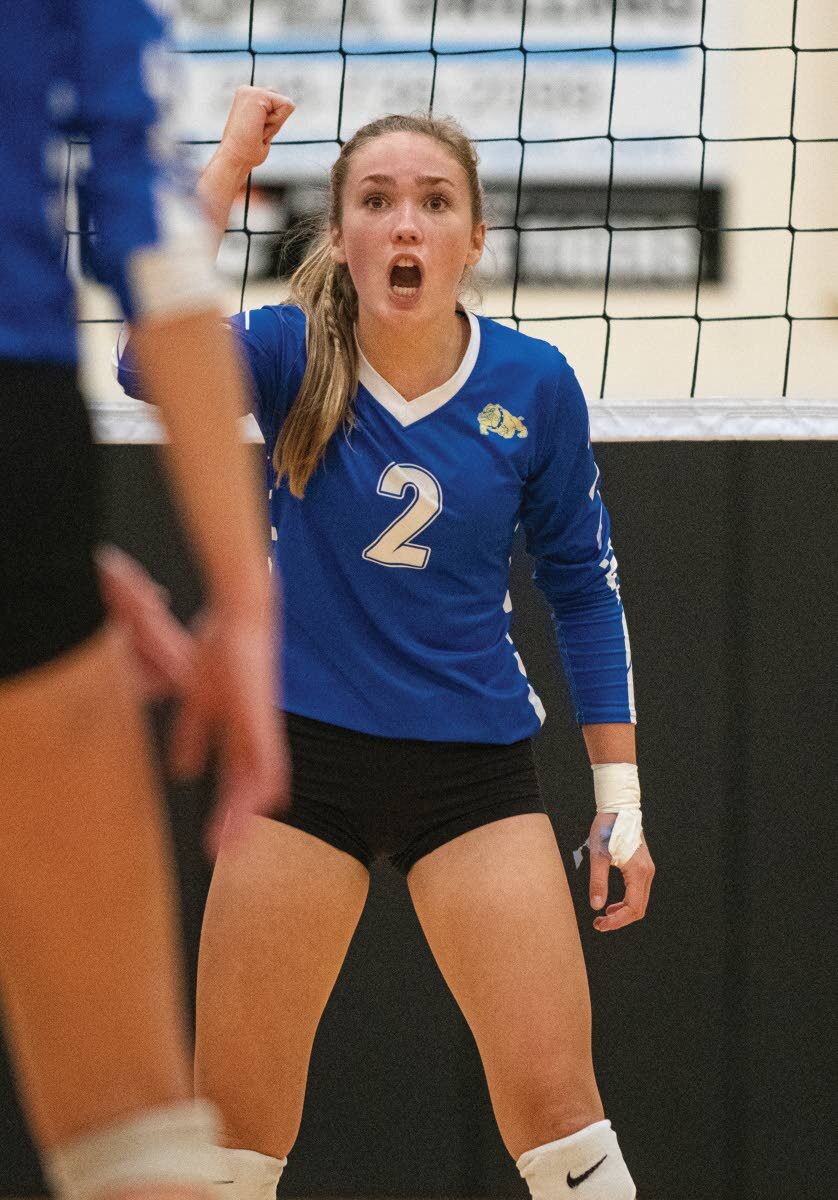 Genesee sophomore setter Makenzie Stout talks to her team during their third set of the Class 1A Division I volleyball championship match Saturday against Grace at Jerome High School. 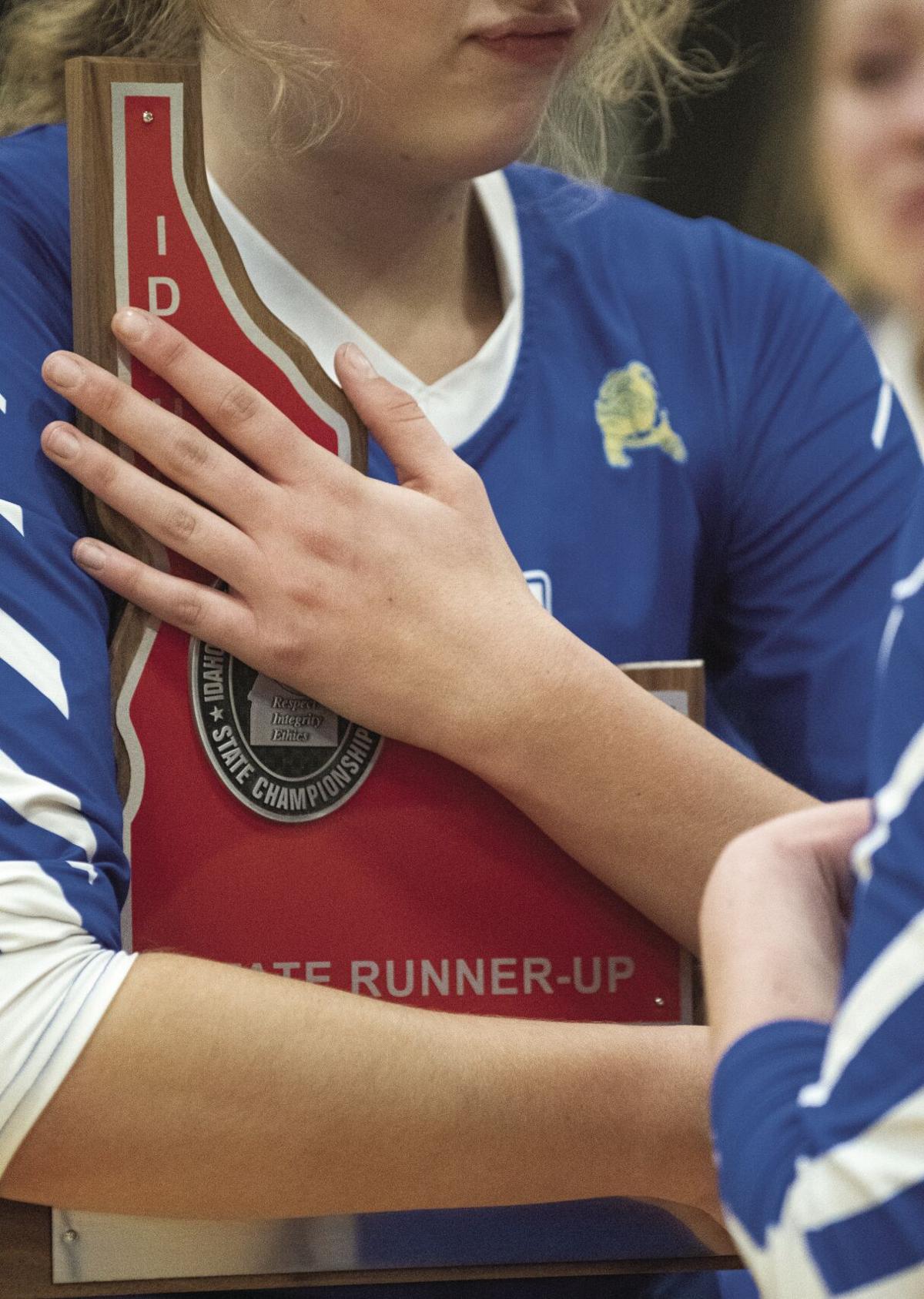 Drew Nash/(Twin Falls) Times-News A Genesee player embraces the runner-up trophy after losing to Grace in three sets in the Class 1A Division I volleyball championship match Saturday at Jerome High School. 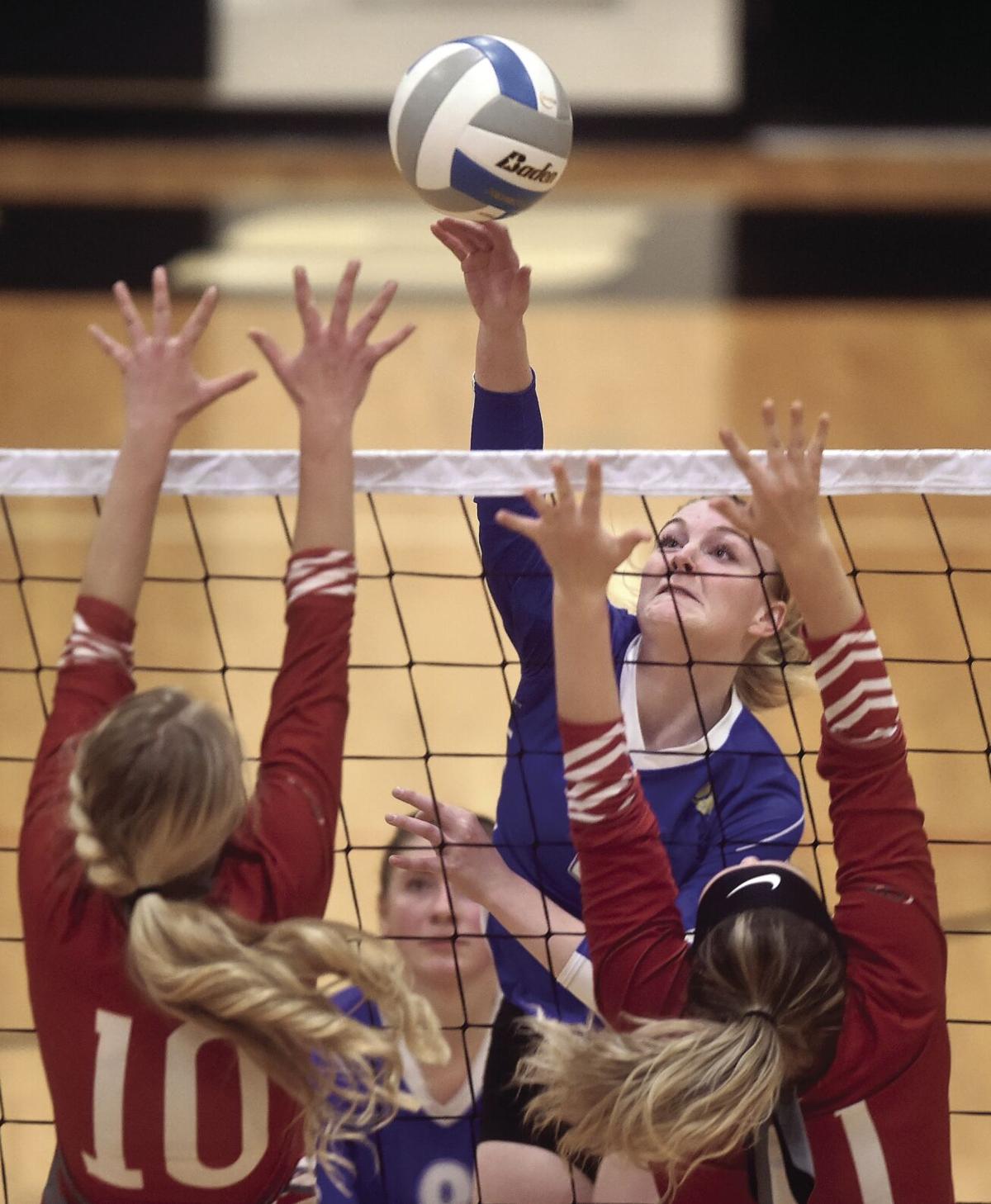 Genesee's Riley Maguire keeps the ball alive during the Class 1A Division I volleyball championship match Saturday against Grace at Jerome High School.

Genesee senior outside hitter Claira Osborne keeps the ball in play during Saturday's Class 1A Division I volleyball championship match against Grace at Jerome High School.

Genesee sophomore setter Makenzie Stout talks to her team during their third set of the Class 1A Division I volleyball championship match Saturday against Grace at Jerome High School.

Drew Nash/(Twin Falls) Times-News A Genesee player embraces the runner-up trophy after losing to Grace in three sets in the Class 1A Division I volleyball championship match Saturday at Jerome High School.

Behind a two-setter system coach Pete Crowley instituted at the start of this season, the Genesee volleyball team got every single bit of juice from its top players throughout the season.

The Bulldogs coach even called this team as good as the one he piloted in 2013, when Genesee won its most recent state championship.

But on Saturday, the Bulldogs ran into a buzzsaw and couldn’t get over the hump. Genesee simply ran out of steam and fell 25-16, 26-24, 25-18 in the Class 1A Division I state final against Grace at Jerome High School.

“Obviously, the girls did their job with everything they can control,” Crowley said.. “At the start of the season, I would not have bet that we would get to this point. We’re definitely thankful to all of the higher-ups for having this opportunity to play.”

It was an improvement from a third-place finish a year ago at the tournament that was conducted at Lapwai High School, but it still was a hard pill to swallow.

“From where we were last year and losing a ton of seniors, to where we ended, we’re very happy,” Crowley said.

Genesee (18-4) previously has won five state titles, including two since Class 1A split into two divisions.

The day also saw Troy (17-2) come up short in its attempt to win its third consecutive title and fourth in five years in the class when the Trojans fell to the Grizzlies in the semifinal round before beating Oakley to finish in third place.

In the first set of the final, the two teams were nip-and-tuck early, but Grace junior Hailey Rigby’s jumping serve handcuffed the Bulldogs as she served two consecutive aces to force a timeout at 9-5. But despite some early serving issues, Genesee slowly chipped away at the deficit and tied it at 15 by leaning on senior outside hitter Claira Osborne with a couple of blocks and cross-court kills. However, the Grizzlies (19-10) were able to get a side-out and countered back with six consecutive points behind Rigby’s mix of hard serves and knucklers as Grace eventually closed it out.

Senior setter Carly Allen’s serving and senior outside hitter Riley Maguire’s deft touch pushed the Bulldogs to an early 6-0 lead in the second. Grace would chip away at its deficit and tied it at 17 thanks to Rigby’s serving and a couple of unforced errors. The Grizzlies did take the lead at 19-18, and from there it was like two heavyweights punching and counter-punching back and forth. Grace’s Kylie Hulse converted two serves late and put Genesee in a deep hole.

Once again, the Bulldogs raced out to an early lead in the third, only to see the Grizzles battle back and grab the advantage. The team of Osborne and Maguire was able to help Genesee knot things at 11. Grace created a little separation and from there it was like a cat-and-mouse game where every time the Bulldogs inched closer, the Grizzlies were able to stay one step ahead with a big kill, a block or a cross-court winner.

“I knew they had firepower, but they returned fire too,” Crowley said. “They would rattle off four or five in a row, and we just didn’t have enough of those kinds of runs.

“We were scrapping and fighting, doing everything we could. I think we had most of the momentum in the second, but they would rattle off four (points) and we’d get two back. We just couldn’t finish climbing the hill.”

Maguire led the way with 10 kills, and Osborne chipped in with 16 digs.

In the semifinal vs. Oakley, Genesee was scoring two of every three points in the first set for the most part until the latter half, when the Bulldogs finished on a 7-2 run leading 18-9.

It was an even more dominating second set for Genesee, which trailed 2-1 in the early stages but got going behind the serving of senior defensive specialist Kami Lockler. She served seven consecutive points before the Hornets could get a side-out, After getting the serve back, junior middle blocker Lucie Ranisate helped her team go on an 8-0 run behind her serve to push the Genesee advantage to 17-3. The Bulldogs cruised from there.

The third was more competitive, with neither team able to string together a significant run, but both teams playing at a championship level. Neither team was able to manage more than a two-point lead for the majority of the set. Oakley was up 16-14 but Genesee finaly took ontrol once it got a side-out on some miscommunication after a great save by the Hornets. Then Osborne served six consecutive points, including three aces, to take a 21-16 lead. From there, it was a matter of hanging on for the Bulldogs.

Osborne had 18 kills and five aces, and Makenzie Stout finished with 12 digs.

“It was some really great volleyball,” Troy coach Debbie Blazzard said. “I know we didn’t come out on top, but I feel like it was the best we played this season because of the way we came together as a team. I know that we came away with a loss, but we finally kind of found a groove.”

Troy looked like the defending two-time state champio throughout much of its match against the Grizzlies. However, Grace might have had other thoughts on its mind.

This time, the Trojans just couldn’t get over the hump, as a mistake here or a Grace kill there seemingly left Troy scrambling, and just a little off.

“It seems like with the close (matches) that we’ve had, it could have swung in a different direction with some of the decisions we made on the court,” Blazzard said. “I never like when we go out poorly, but I don’t feel like it was that way. It was just so much fun to watch.”

Junior outside hitter Morgan Blazzard led the way with 21 kills. Sophomore outside hitter Katie Gray had seven kills and was 13-for-15 serving with an ace. Junior setter Isabelle Raasch was solid behind the service line as well, going 15-for-16 with three aces.

Against Oakley (8-7), it seemed like Troy was on a mission, taking the early lead in the first set and not letting up off the gas. The Trojans probably were motivated after the semifinal loss and dominated from start to finish.

In the second set, the Trojans and Hornets went back-and-forth in the first 11 points. However, Troy started to show its strength as left-handed freshman setter Olivia Tyler had a couple of aces behind the service line, the Trojans forced Oakley into a few mistakes and the Troy offense was rolling as it took a 17-6 advantage.

The Hornets mounted a comeback, as Oakley pulled it to within 19-14 as it got a few offensive kills and a couple of breaks. The Hornets were able to get it to 22-19, but time and again Morgan Blazzard had numerous powerful kills and served out the set.

Troy went on another run to start the third, scoring 18 of the first 22 points, including a string of 12 in a row behind the serving of Morgan Blazzard, before a mishit gave Grace a side-out. But it didn’t really matter at that stage, as Troy finished it off with, of course, a kill by Morgan Blazzard.

“We were just grateful to get to this point,” Debbie Blazzard said. “Throughout the season, we even kept wondering whether we were going to have a championship. When we lost (to Grace), we just realized these things happen and we just wanted to come away with a trophy. It was a little hard because the match against Grace was emotionally and physically taxing. We were just mentally tough against Oakley, we had a plan and they were able to achieve that plan.”

Raasch finished with 26 assists and junior libero McKayla Sapp was 9-for-9 serving with two aces as Debbie Blazzard lauded her team’s balance.

Mustangs coach Dani Jones was unavailable for comment, and stats were unavailable at press time.