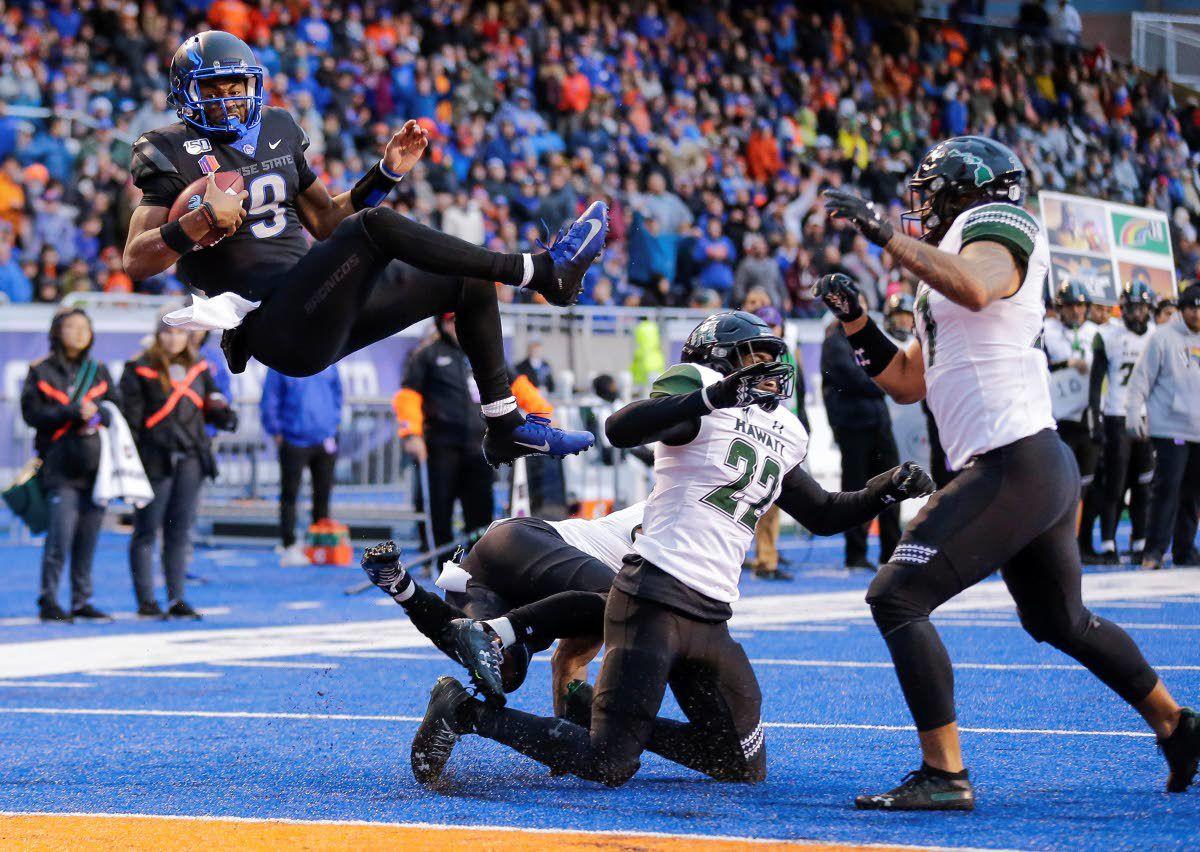 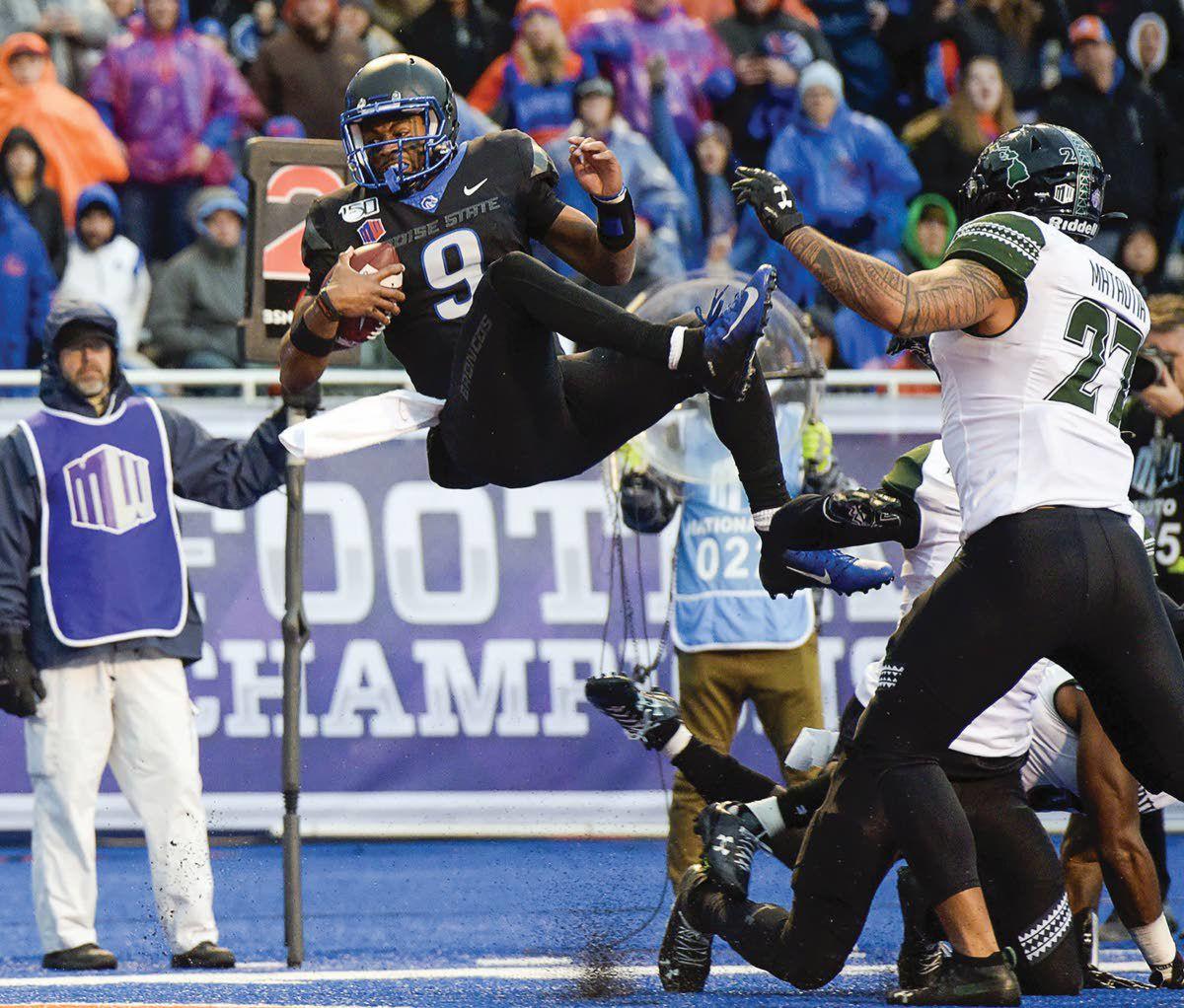 Idaho Press/Jake KingBoise State quarterback Jaylon Henderson leaps for a touchdown during the second half of Saturday’s Mountain West championship game vs. Hawaii. 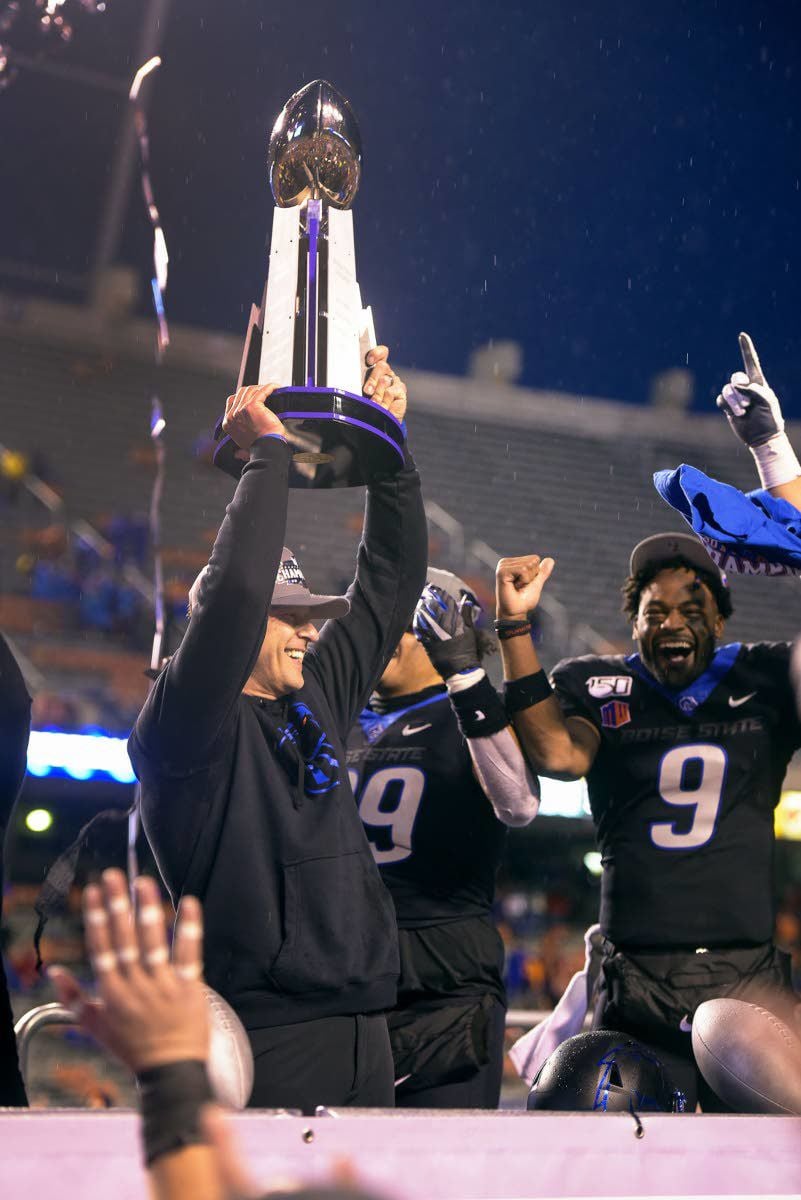 Idaho Press/Jake KingBoise State quarterback Jaylon Henderson leaps for a touchdown during the second half of Saturday’s Mountain West championship game vs. Hawaii.

BOISE — There was something missing as the celebration started near midfield at Albertsons Stadium on Saturday.

“Who has the hats?” Boise State senior tight end Garrett Collingham screamed out.

Boise State’s players quickly found the staffer passing out 2019 Mountain West championship hats, and the party was on.

The Broncos, after losing in overtime in heartbreaking fashion in last year’s Mountain West title game, danced and partied on the blue turf after topping Hawaii 31-10 to win the 2019 league crown.

The win almost assures Boise State a trip to the Las Vegas Bowl on Dec. 21. The Broncos will play a team from the Pac-12, possibly the Washington Huskies in the final game for former Boise State coach Chris Petersen. The bowl matchup will be announced today.

Boise State erased a slow start by scoring 14 points in the final 67 seconds of the first half to lead 17-3 at the break. They pushed the lead to 31-3 late in the third quarter and allowed only a fourth-quarter touchdown to Hawaii’s high-powered offense.

A crowd of 23,561, easily the smallest of the season, stormed the field in celebration as the Broncos celebrated their second Mountain West championship in the past three years.

“Last year was a big disappointment, so it was big to bounce back like this,” senior defensive tackle Chase Hatada said. “It’s the perfect ending. It’s special, especially being my senior year and with the whole D-line going out ... we wanted the Cotton Bowl, but there’s no disappointment. We’ll play anybody anytime, anywhere.”

Boise State fans had one eye on the action here and the other on the American Athletic Conference title game in Memphis. A Cincinnati win would have given the Broncos a shot at the Cotton Bowl as the top-ranked Group of Five conference champion. The Bearcats almost pulled off the upset before falling 29-24.

The scene was surreal and one nobody could have imagined happening a month ago: Redshirt senior quarterback Jaylon Henderson, the third-string quarterback for much of the year, accepting a trophy as the Offensive MVP of the title game.

Henderson completed 20 of 29 passes for 212 yards and two touchdowns and also had 14 rushes for 51 yards and a touchdown. He’s accounted for three touchdowns in each of the four games since he entered the starting lineup Nov. 16 against New Mexico.

“It’s a feeling like none other,” Henderson said. “At the end of the day, I’m a type of guy that no matter what the team does, I just want to go out there and get the win. As long as we get the win, I’m a happy guy.”

Khalil Shakir had seven catches for 89 yards and a touchdown and also had a rushing touchdown. John Hightower added three catches for 64 yards and a score, and freshman running back George Holani had 67 yards rushing on 16 carries and will need just 17 yards in the bowl game to extend Boise State’s streak to 11 consecutive seasons with a 1,000-yard rusher.

The defense deserves a ton of credit for limiting one of the top offenses in the country. Hawaii scored 37 points in the first meeting between the two teams Oct. 12.

Hawaii converted two fourth downs in the first half, but it was the one they didn’t pick up that might have changed the game. The Warriors briefly took a 6-3 lead on a short field goal, but an offsides penalty on Boise State moved them to the 1-yard line and coach Nick Rolovich elected to bring the offense back onto the field.

But senior nose tackle Sonatane Lui and senior linebacker Riley Whimpey stopped Hawaii quarterback Cole McDonald just short of the goal line on fourth down, and the Broncos took over on downs with the score still tied at 3.

“The mentality of the defense, when it’s fourth-and-1, our mentality is to mount up and freaking come back and smack them in the mouth and that’s what we did,” Whimpey said. “Our defensive players and coaches, we just executed and were where we needed to be.

“I’ve been envisioning this for who knows how long. To be able to accomplish this with my teammates and be able to celebrate like this, it’s something special ... All the work you put in going back to January, it just feels unbelievable to see all that hard work pay off.”

Boise State went punt, field goal, punt on its first three drives and had just 97 total yards when they got the ball midway through the second quarter.

Facing a fourth-and-4 from the Hawaii 36, Henderson escaped pressure and heaved a long pass Shakir caught in stride and took into the end zone for a 10-3 lead with 1:07 left in the half.

After a quick three-and-out by Hawaii, the Broncos got the ball back at their own 43 with 38 seconds left. Henderson found Shakir for 21 yards, then hit Hightower — who somehow kept his balance and stayed on his feet and went untouched into the end zone for another 36-yard score with 14 seconds left to make it 17-3.

“That was huge because it created momentum going into half,” Shakir said. “We came out slow, but we knew what we were capable of and to see us do that before half, we knew how the rest of the game was going to be.

“It’s an amazing feeling. It’s the best moment ever. I’ve never been so happy. I love this team, I love these coaches. I just love it all.

Boise State’s defense came up with another stop on fourth-and-goal from the 5 early in the third to keep Hawaii from getting closer, and the offense took care of things from there.

The Broncos scored two touchdowns in 51 seconds late in the third to put the game out of reach.

A 4-yard touchdown run from Shakir on an end around capped an 11-play, 79-yard drive and put the Broncos in front 24-3.

Boise State’s defense then made another big play when Lui stripped McDonald and Demetri Washington recovered it at the Hawaii 9. Henderson scored on a 5-yard run two plays later to give the Broncos a commanding 31-3 lead.

Hawaii finally reached the end zone on a 21-yard run from Miles Reed with 12 minutes left in the game for the final margin.

It was a night and a celebration more than a year in the making. And one the players and coaches made sure to soak in.

“This one is really special,” Boise State coach Bryan Harsin said. “We knew it would be difficult, but our guys rose to the occasion again and we were able to go out there and find a way to finish, and get a championship.”