Moscow Blue Devils first baseman Ryan Delusa (left) attempts to grab the ball while trying to tag Spokane’s Peyton McPherson in the third inning in the first game of a doubleheader Tuesday at Bear Field in Moscow. 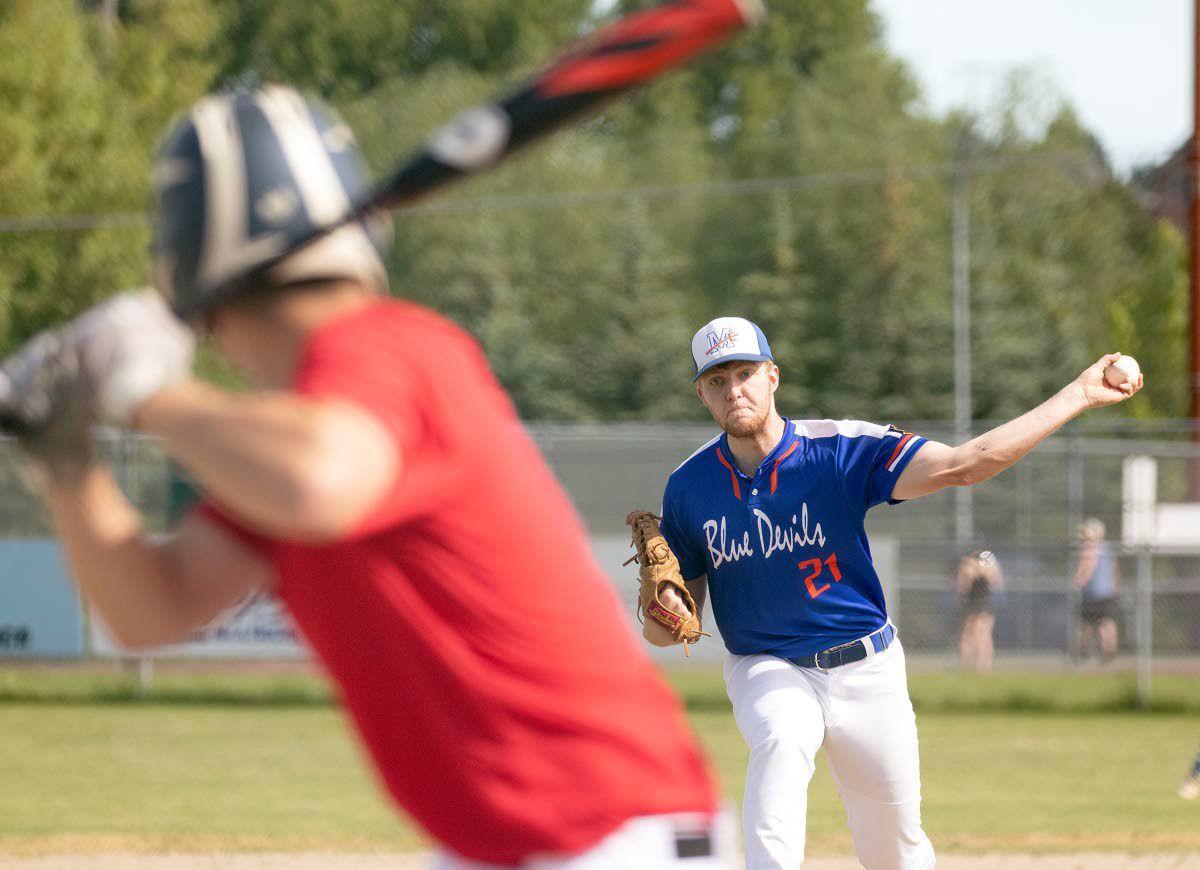 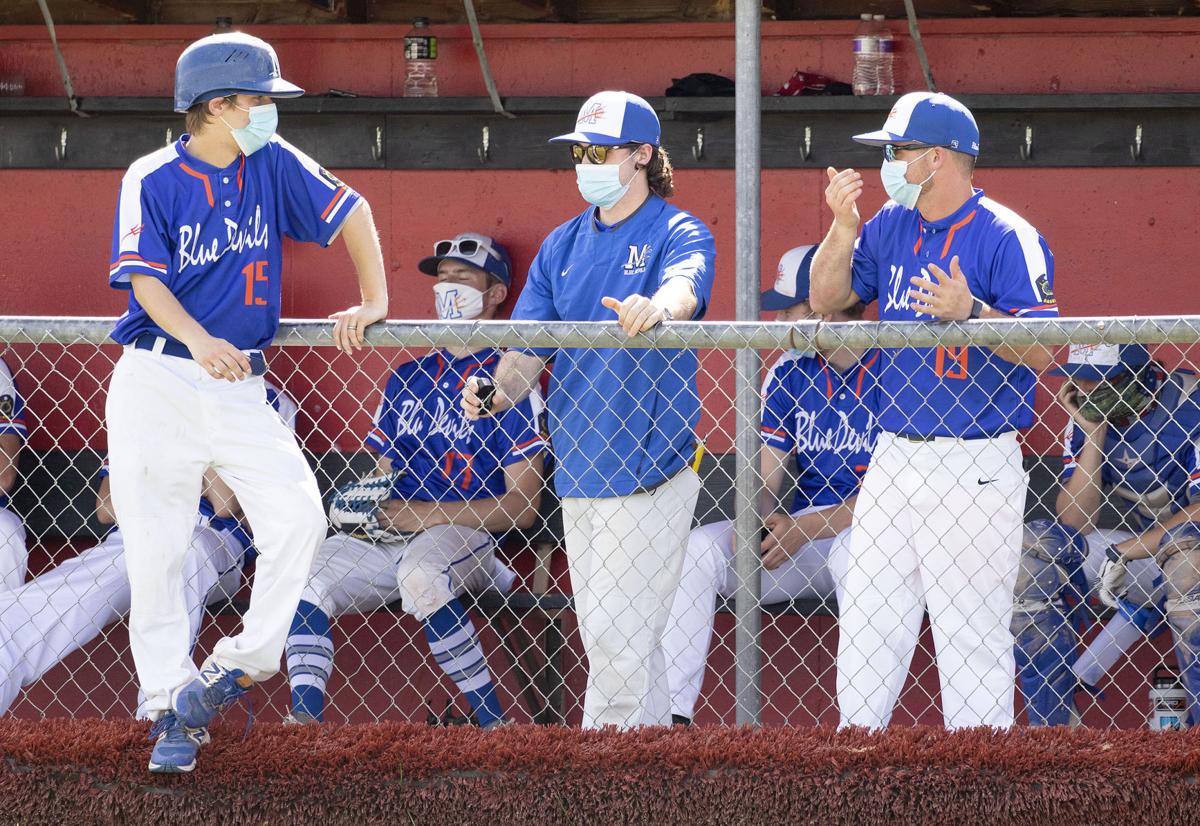 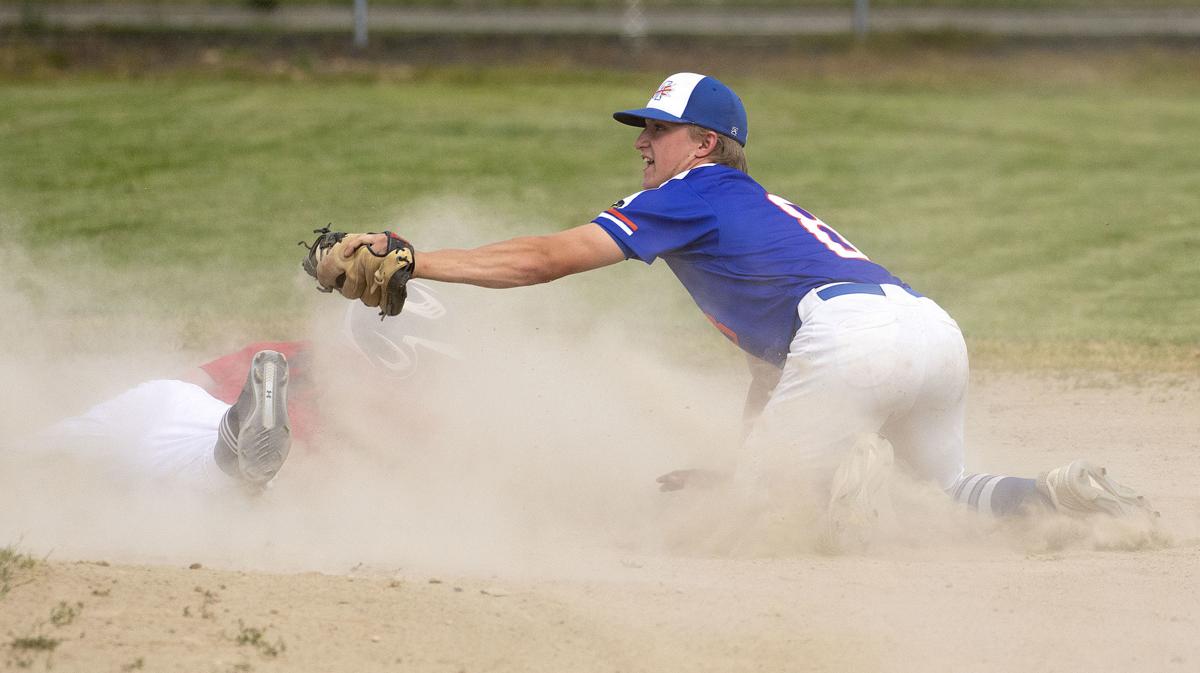 Chad Redinger, right, from the Moscow Blue Devils reacts after tagging out Spokane's Cannon Marshall in the third inning in the first game of a double header on Tuesday at Bear Field in Moscow

Moscow Blue Devils first baseman Ryan Delusa (left) attempts to grab the ball while trying to tag Spokane’s Peyton McPherson in the third inning in the first game of a doubleheader Tuesday at Bear Field in Moscow.

Chad Redinger, right, from the Moscow Blue Devils reacts after tagging out Spokane's Cannon Marshall in the third inning in the first game of a double header on Tuesday at Bear Field in Moscow

MOSCOW — It was almost an unfamiliar scene on display Tuesday at Bear Field.

Pitchers were pitching, batters were hitting, baseballs were flying and the almost forgotten world of live sports returned.

The home portion of the season for the Moscow Blue Devils senior American Legion team finally began Tuesday after months of indecision because of the coronavirus pandemic and rainouts in the team’s first four home games.

The Blue Devils apparently were happy to be back, as they buried the Spokane Cannons 8-6 and 12-3 in a doubleheader at Bear Field a long time in the making.

“They were ready for a home opener,” Moscow coach Stan Mattoon said. “We’ve practiced on this field for a couple weeks and they really wanted to show the fans that they were ready to go this year.”

Fans also showed up in force for the first official sporting event on the Palouse since the pandemic shut down the sports world in March.

Classic rock songs blared over the loudspeakers as fans filled in along the left- and right-field lines, most groups somewhat adhering to social distancing, as others set up chairs along the hill overlooking the field at Moscow Middle School.

Even the weather cooperated, with sunny skies and a balmy 81 degrees. It actually felt like baseball season.

“The crowd was great,” Mattoon said. “They were stoked when they saw how many people were coming in here.

“I don’t know if they’re just tired of watching reruns on TV, but it’s nice to have them out to watch baseball. I think most people want to watch something live and we’re it, so it was nice.”

The Blue Devils (4-3) weren’t about to disappoint their fans in their long-awaited home debut.

Center fielder/first baseman Hayden Thompson led the way with six RBI and three runs, including a home run in the second game.

Thompson got Moscow going in the first game with a three-run double to deep center field. It would’ve been a triple for Thompson if not for a great throw by Cannons center fielder Joe Oliver.

“That was kind of a little breakout moment there to make everyone know ‘Hey, we can play with these guys,’” Mattoon said.

Thompson’s hit put the Blue Devils up 4-0 in the bottom of the third, only for the Cannons to come back and tie the game at 4 in the top of the fourth.

But Moscow bounced back with three runs in the bottom half to take the lead for good, and the Blue Devils never trailed again the rest of the night.

In the second game, Moscow used a big third inning to take control.

Jarod Grady’s two-run double with no outs scored Chad Redinger and Barrett Abendroth, and the Blue Devils batted around in taking a 6-0 lead.

Grady powered Moscow at the plate and on the mound. Grady tallied four RBI, two hits and two runs, while allowing just three runs in five innings in Game 2.

Connor Akins earned the win for the Blue Devils in the opener.

In total, 12 Blue Devils scored runs in the two games.

The players also adhered to social distancing protocols, for the most part. Cones marked spots six feet apart along the left- and right-field lines, and players who weren’t in the games sat in chairs outside of the dugouts.

The bleachers were taped off, but there still was plenty of room for spectators to spread out.

Next up, Moscow will face Silver Valley in a doubleheader at 4 p.m. Thursday at Bear Field.

“There’s no let up for us,” Mattoon said. “We’ve got to have a good day of practice tomorrow and then we’ve got to get ready for Silver Valley. They’re no slouch.”