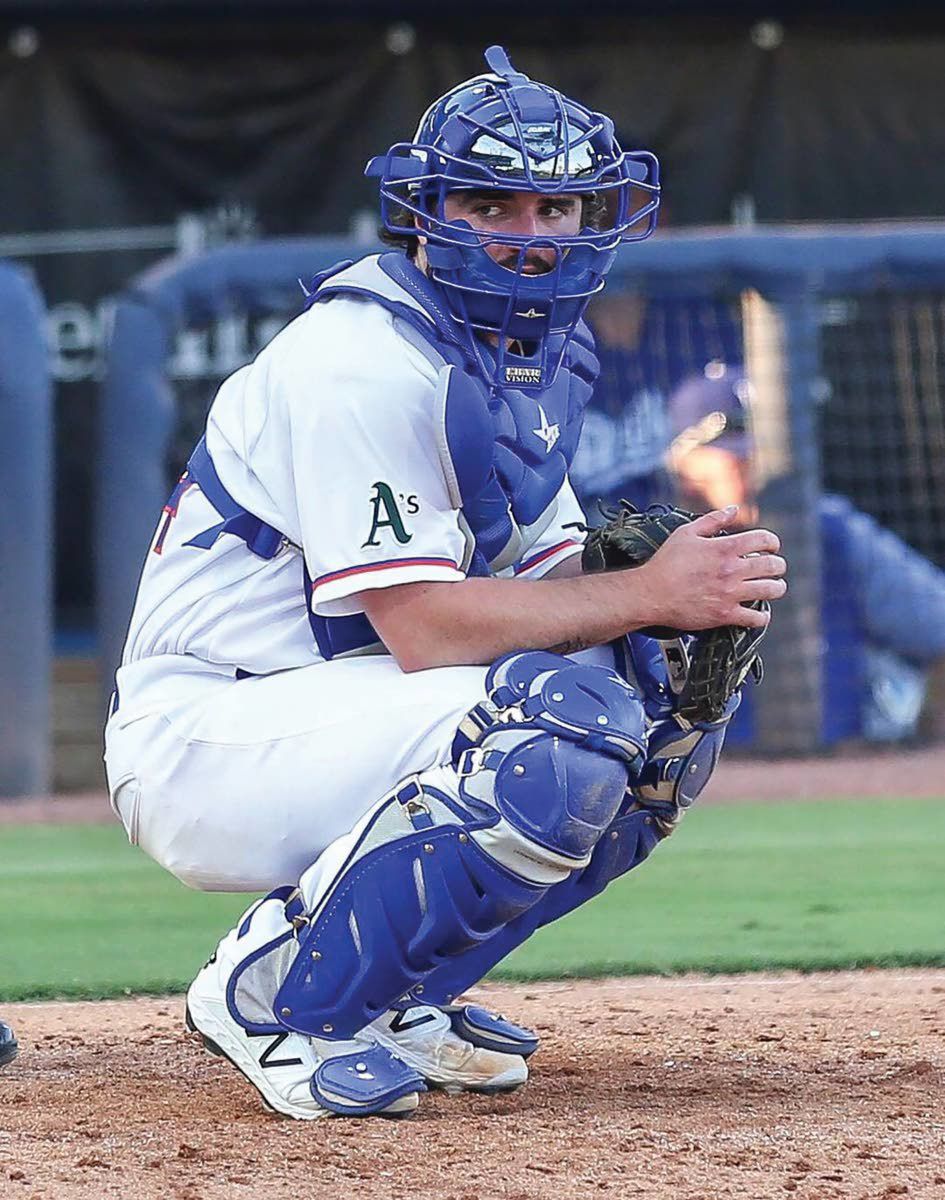 Cooper Goldby looks into the dugout to get a sign during a 2019 Midland RockHounds game. Goldby, a former Lewis-Clark State player, owns a .981 fielding percentage in 47 career games as a catcher. 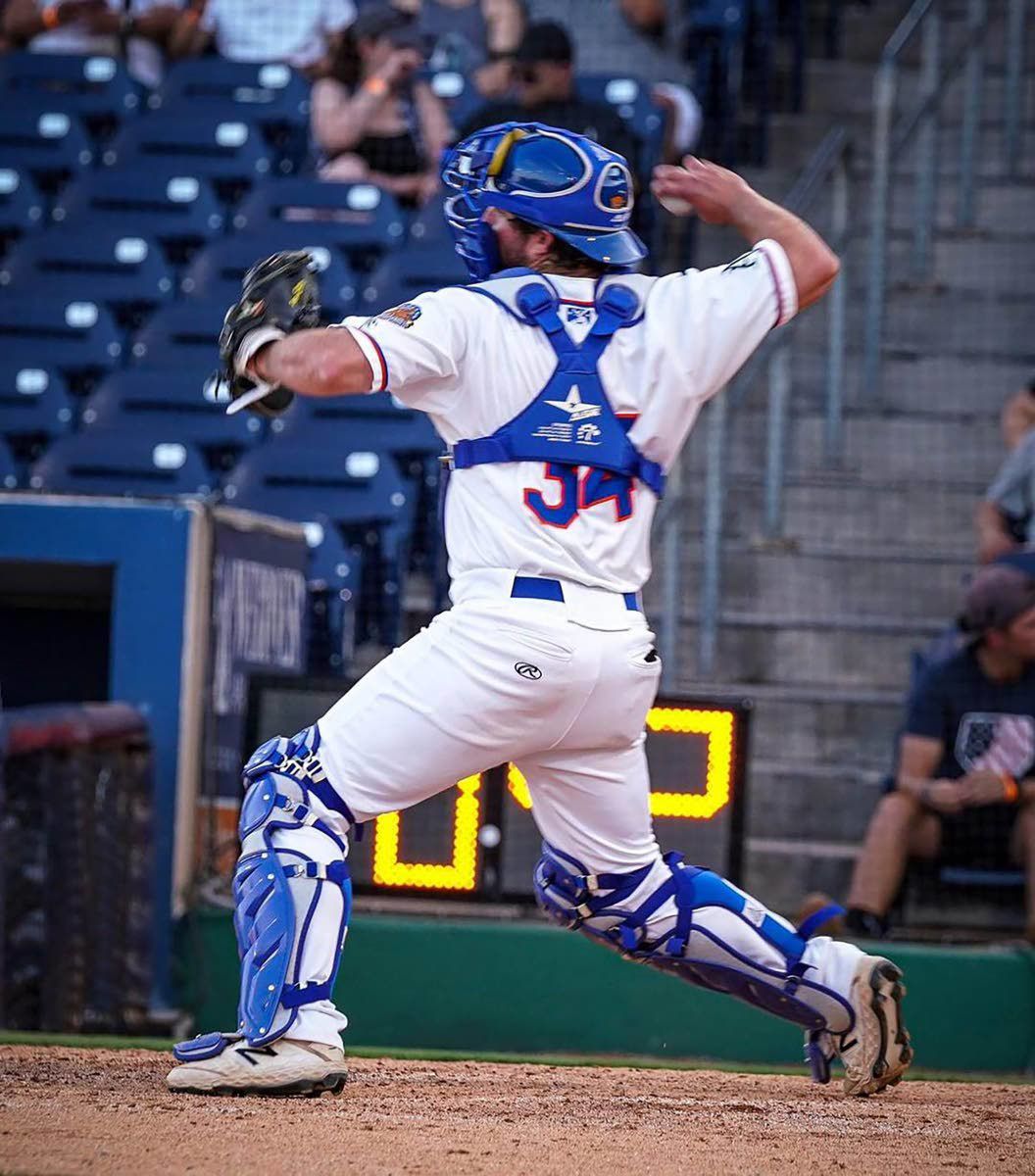 Cooper Goldby looks into the dugout to get a sign during a 2019 Midland RockHounds game. Goldby, a former Lewis-Clark State player, owns a .981 fielding percentage in 47 career games as a catcher.

This story is the second in a series of profiles on minor league baseball players who attended Lewis-Clark State.

For Cooper Goldby, the next stop on his path through the minor leagues is a toss-up.

But that’s how it’s been the past three years for the former Lewis-Clark State catcher from Yuba City, Calif.

“Definitely don’t try to figure out where you’re going, or why certain moves are being made; be along for the ride,” the Oakland Athletics’ 35th round draft pick in 2017 said. “My career has been a chess piece. I’ve been moved to quite a few spots and been in quite a few predicaments.

“But most everyone has to work their way up the ladder system.”

Goldby, a defensive stalwart and two-time Avista NAIA World Series champion with LCSC, could be a case study on the grind of players in minor league baseball. He’s caught for every team in the A’s organization but one (High Single-A Stockton), and spent offseasons working as a construction worker in California, and earlier, a Lewiston-Clarkston Valley substitute teacher.

He spent his rookie year with the Arizona League Athletics. That summer, he was able to catch A’s starters like Sean Manaea and Daniel Mengden. Big leaguers often train in Arizona during the All-Star break, or rehab there.

“You can definitely see a different demeanor with them; they completely believe in their stuff,” Goldby said. “When Sean Manaea came back and I caught his bullpen during the break, he’d adjust me, like literally, ‘Move your glove two inches to the left.’ That’s the difference between being a major or minor leaguer, is repetition, how much you know you’ll be successful.”

Goldby started 2018 in extended spring training before a one-game stint with the Low Single-A Vermont Lake Monsters. After two weeks on the injured list, Goldby — for his steadiness behind the plate — got in a game in a week for Triple-A Nashville to end his year.

“Out of the collection of my experiences in baseball, that was probably my favorite,” he said of his short time with the Sounds. “Filling a spot is super exciting.”

Goldby, as a 24-year-old, started his 2019 season again with Oakland’s extended spring training team — made up of mostly rookies out of high school and college, as well as newly acquired players from Latin America.

“I didn’t perform to my best capabilities. It was kinda a bummer,” he said. “It was just like spring training. We stick around, show up in the morning and have games in the afternoon, like six days a week.”

A’s coaches told Goldby, the oldest player there, that they wanted to see him assume an “older brother” role.

“That was definitely a compliment,” he said.

In all, 2019 turned out to be a breakout of sorts, and Goldby finally found some stability. In May, he was called up to the Single-A Beloit (Wis.) Snappers, with whom he played in 10 games. The A’s liked what they saw, so they pushed him through to Double-A and the Midland (Texas) RockHounds.

“I wasn’t expecting it. We got done with a (Beloit) game at about 10 at night, and my manager called me in and said, ‘It was a fun ride,’” Goldby said. “I was like, ‘Oh, crap. Maybe I’m getting released.’ But managers like to mess with guys when they go up.”

He took off on a plane at 5 a.m. the next day and proceeded to hop on a bus for a 12-hour ride to the RockHounds’ next game. He sat in the dugout as a backup catcher that day in June.

Goldby remained with the team through the rest of the season, seeing action in 22 games (starting 15) and becoming one of the more well-respected defensive players.

In 146 minor-league at-bats, Goldby is batting .158 — an area he said he’s determined to shore up. But his defense has been commendable. In 47 games as a catcher, Goldby owns a .981 fielding percentage, and has committed only seven errors in 345 innings. He’s also played in four games as a first baseman and two as an outfielder. Goldby said his time in Midland represented a considerable step forward.

He got his fair share of guidance from the RockHounds’ coaching staff and catcher Collin Theroux. He changed his style — going down on one knee now — honed his mechanics and learned to better “manipulate” the strike zone.

“This last season was gigantic for me,” he said. “I wasn’t really a main priority to keep around, being a higher draft pick. So when I got that call and actually got playing time ... that was satisfying.”

Like just about everyone else in the baseball world, Goldby is awaiting his next assignment while training from home in California, utilizing a local high school’s batting cages and fields when possible, and practicing with little brother Caden, a senior outfielder for Lewis-Clark State who’s followed Cooper’s steps — through high school baseball in Yuba, to Yavapai College, to the Warriors.

“I’ve respected him my entire life,” Caden Goldby said of his brother. Their father, Scott, is a Yavapai alumnus and now a scouting supervisor with the Miami Marlins. “His position is one of the hardest to play, being the general of the whole field. ... He’s calm, cool and collected all the time behind the dish, so I try to transition that into my way of playing.”

Cooper Goldby still finds himself adhering to the “Warrior Way,” which he studied under former LCSC coach Jeremiah Robbins. He logged a .989 fielding percentage with just three errors in 36 games as a senior.

He runs everywhere — and has been told to take it easy by A’s personnel — and retains the “be where your feet are” mentality. He affectionately remembers L-C team wood-chopping in the fall; how Warrior players would spray paint their cleats black so “no one looked different; and the past “no batting gloves” rule. His reputation also has been boosted by a former Warrior.

“When I tell people I went to school in Lewiston, Idaho, they’d be like, ‘Oh, that’s where (A’s outfielder Seth Brown) played. I’ve heard stories about you guys. You guys are crazy,’” he said.

“If I didn’t go there, I probably wouldn’t be here,” on his way up the ladder.