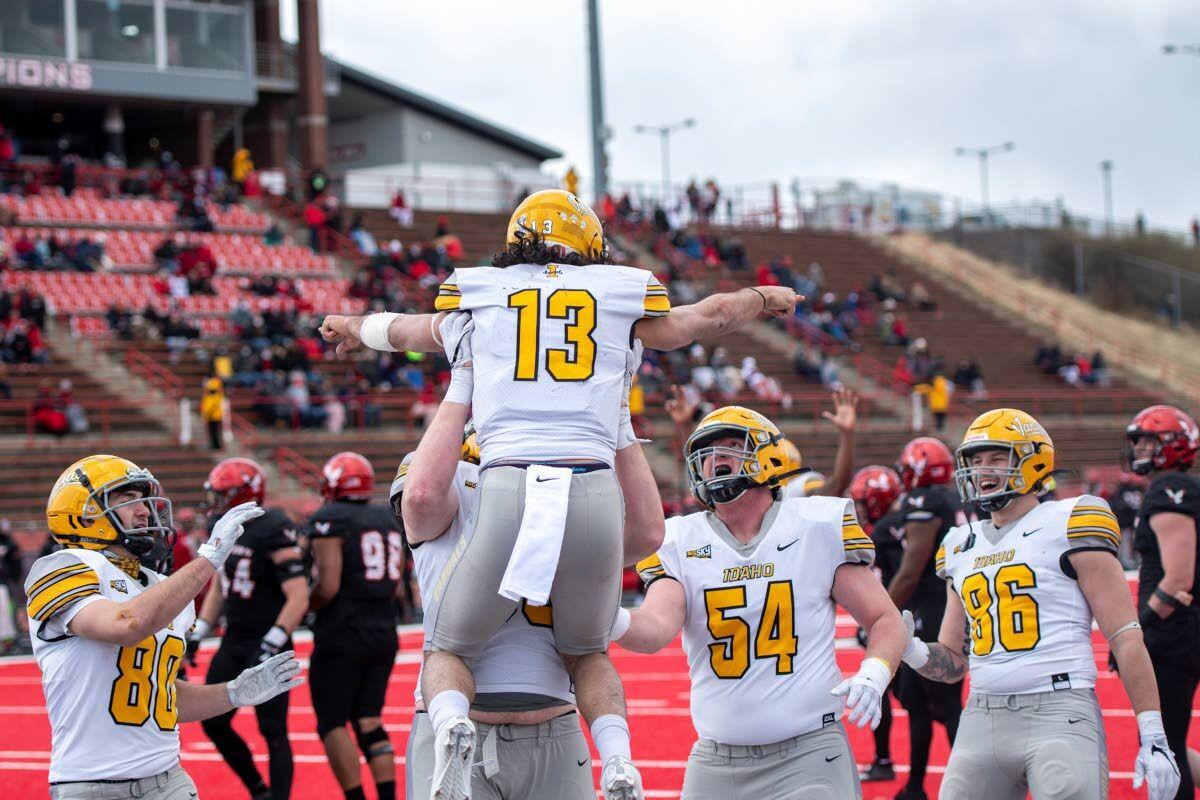 Idaho quarterback Zach Borisch is lifted up by offensive lineman Seth Carnahan after scoring a touchdown during the third quarter of Saturday’s Big Sky Conference game against Eastern Washington at Roos Field. Borisch etched his name into the Vandal history books with a 205-yard rushing performance against the Eagles. 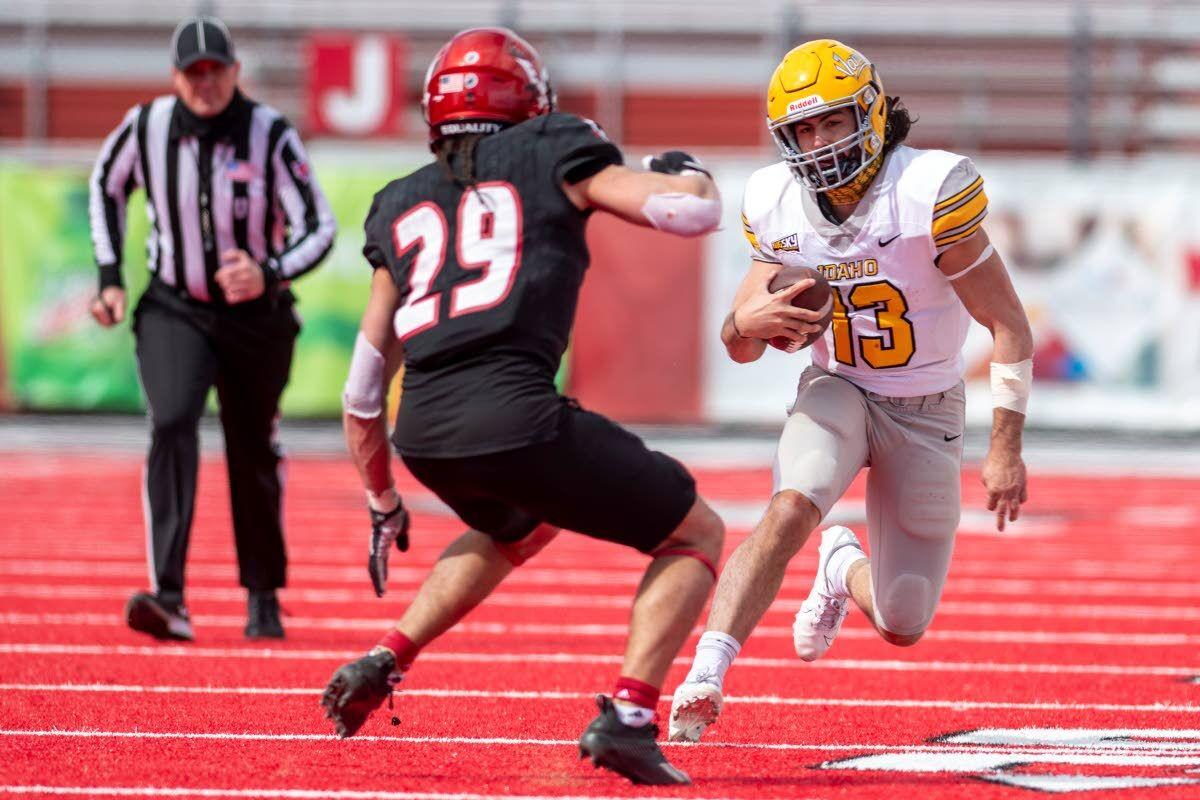 Light from the setting sun reflects off the Snake River as a boater makes their way upriver in Lewiston on a recent evening.

Idaho quarterback Zach Borisch is lifted up by offensive lineman Seth Carnahan after scoring a touchdown during the third quarter of Saturday’s Big Sky Conference game against Eastern Washington at Roos Field. Borisch etched his name into the Vandal history books with a 205-yard rushing performance against the Eagles.

Light from the setting sun reflects off the Snake River as a boater makes their way upriver in Lewiston on a recent evening.

Zach Borisch couldn’t help but be a little rusty, and who could blame him? He got the call just six days in advance: He'd be making his first career collegiate start at quarterback.

“I was kind of blown away,” admitted the redshirt sophomore, who hadn’t played the position since his high school days at Kennewick’s Kamiakin in 2016.

He had three standard practices, plus one walk-through, to nail down a run-often option scheme, which Idaho’s football team installed abruptly — and secretly — with signal-callers Mike Beaudry, CJ Jordan and Nikhil Nayar each sidelined for various reasons.

The Vandals unveiled the new system in a competitive, 38-31 loss at No. 9 Eastern Washington on Saturday.

There were breakdowns, Borisch acknowledged. Occasionally, he’d take a run in the direction opposite of its design, yet he’d still turn the broken play into a plus.

“Sometimes,” he said, laughing in hindsight, “I didn’t motion the player I was supposed to.

“Coach (Paul Petrino) would call a motion and I’d completely forget, and just run the ball.”

His inexperience taking snaps at UI resulted in minimal damage to the Vandals' cause. In fact, a couple of Borisch's several chunk-gain rushes that afternoon came when he "didn't follow the holes I was supposed to."

"So I had to knock off a little rust," he said during a news conference Tuesday. “It was a lot of learning in one week while trying to do school work, and jumping into that role I had to jump into.

"But I wouldn’t take it back for anything."

Any slight hiccups aside, Zach Borisch couldn’t help himself from “smiling the whole entire game.” Again, who could blame him?

He’d toiled on UI’s practice squad for two fall seasons before his number was called in this peculiar spring campaign, and his big break did not disappoint.

Suddenly, Borisch was departing EWU’s red turf at Roos Field not as a special-teams utility man in the background, but as a fan-favorite — a ball-carrying gem who posted a top-10 rushing outing in Vandal history (33 carries, 205 yards, two touchdowns), which doubled as the Big Sky Conference’s best ground output of the season from a single player.

“It sucked that a couple of people had to go out, but to get the opportunity was a blessing, and being able to go out and get on the field again and be a contributor was something I missed a lot," he said. "I couldn’t be more excited than I was.”

It’s uncertain whether Borisch will start under center again when the Vandals (2-3) kick off their season finale at 1 p.m. Pacific this Saturday at Northern Arizona.

Petrino stayed mum on that subject. After a debut like that, though, one has to wonder what Borisch is capable of at 100-percent crisp.

Nonetheless, the reasonable expectation is that he’ll remain in use as an offensive weapon in some fashion. As for Borisch, he's not sure what the future holds.

“That’s why the coaches are the coaches. They’ll make the great plans they do, which ultimately led to some success on Saturday. ... I’m just going to trust the process, trust what the coaches tell me to do and play as hard as I can.”

Overall, Petrino was pleased with Borisch’s execution of the offense. The plan was to dominate the time-of-possession column and go for 3.5 yards a pop.

The Vandals controlled the ball for 13 more minutes than Eastern, and averaged 5 yards on each of their staggering 59 carries, with Borisch pacing the pack, rolling up 6.2 yards per try. They went toe-to-toe with the Eagles before the gas ran out and a few drives stalled consecutively in the fourth quarter.

“You knew how competitive he was — you saw that in practices,” said Petrino, referencing Borisch’s work on kickoffs and as a practice-squad running back. He’d lined up as a defensive back between 2018-19 too.

“He was extremely competitive, ran hard and showed a lot of toughness, fire and spirit, and the guys fed off that.”

Petrino was not all that shocked by Borisch's poised play through the expected kinks. The eighth-year coach pointed out the tests he'd already faced: the international judo tournaments, two of which ended with Borisch a bronze medalist for the U.S. And don't discount the prep accomplishments on the gridiron.

The former Washington Class 3A player of the year, who guided the Braves to their first state title — an upset of O’Dea in 2016 — didn't show apprehension Saturday.

His enthusiasm was palpable, and it bled into teammates who raised the fortunes of Idaho's unlikely workhorse.

“It was just me so excited about playing the game, doing something I love, and I think that rubbed off on the rest of the team,” he said. “They felt the energy and passion I had. ... The energy as a whole from everyone came together while I was getting super juiced up about being out there."

Borisch and Petrino handed major props to UI’s offensive line, which welcomed back standout center Chad Bagwell. The juco transfer was highlighted as key throughout preseason camp, but sustained an injury early in a Week 1 win versus EWU in Moscow.

“Those guys up front are the reason I got all those yards. They were kicking butt all day,” Borisch said, citing an abundance of “Vandal blocks” — pancake blocks, in other words.

“We had a lot of those, just because everyone was feeling the energy and wanting to go play their tails off. It was awesome to be behind them, watching it happen for me.”

Borisch also lauded the effort of bruising fullback Logan Kendall, a Cheney, Wash., native who has emerged as one of Idaho’s more underrated talents. Borisch often ran directly behind Kendall, and hit him with a rollout play-action pass on fourth-and-1 for a 25-yard touchdown.

But the bulk of recent praise has been directed at the quarterback, and rightfully so.

He showed off a veteran-like awareness, reading lanes artfully and demonstrating balance, cutback speed, plus pile-pushing power that perhaps isn’t expected of a 6-foot, 203-pounder.

"It's usually been about having good vision. I'm not the biggest guy on the planet by any means. I'm not supposed to take on a 230-pound linebacker in the hole. I've done that a few times with Christian (Elliss) at practice. It's not fun. I run hard and I feel like I see the holes opening up decently, hit that gap then see where people are moving."

He was a running back at the youth level, and — because of his early fandom for leg-churning NFL legend Walter Payton — always sported No. 34.

His shift this past offseason back to the position helped him significantly against the Eagles, Petrino said. Apparently, the coach had ample trust in Borisch, enough to task him with the bulk of UI's touches.

“Whenever I feel first contact, I just keep running my legs, trying to get out of the tackle," Borisch said. "One thing Coach P always says is, ‘Believe that no one can take you down.' I always try to think that person can’t take me down, even though sometimes they’re way bigger than me."

Passing-wise, Borisch went 5-for-11 for 74 yards, a touchdown and two late picks at a windy venue. At Kamiakin, he flourished through the air, piling up nearly 5,000 yards combined during his junior and senior seasons, while rushing for well over 1,000. He totaled 45 touchdowns in 2016.

He was relied on greatly for his leg speed early in his prep career, until it became clear his arm was a threat as well.

Borisch “stayed in the pocket quite a bit” in his upperclassman years, and if he were to roll out, he’d keep his eyes downfield. Petrino said developing Borisch’s passing capacities and inserting a package for him in that regard is a distinct possibility.

In any event, Borisch should have more than one week’s notice next time. He’s no longer awaiting a surprise call-up from the practice squad.

“(Football) is something I've just been so passionate about my entire life," he said. "A lot of things haven’t worked out, or gone the way I envisioned it going for myself while I’ve been at the University of Idaho, so I just kept my nose down and worked and trusted that God has a plan, that I was going to have that chance someday to be able to shine."